The best food trucks in Miami for satisfying mobile eats

November 2019: Early this decade it seemed that restaurants would no longer exist in non-mobile form. Food trucks were sweeping the nation, bringing everything from burritos to Bahn mi to street corners everywhere. That craze seems to have died down to some degree, with the most successful trucks branching out to brick-and-mortars, including Ms. Cheezious, which recently opened at Time Out Market Miami, and El Bagel, which soon opens its first shop in the Upper Eastside. La Pollita followed a similar trajectory, with its owners closing the truck to focus on their first restaurant, Boia De. Though you can still find some fantastic options on wheels in Miami, like newcomer Chifa Streets located at Veza Sur’s courtyard for optimal hangover prevention.

Food trucks? Miami has plenty of them. It’s one dining trend this city can’t get enough of (along with, of course, the brunches in Miami). Roving restaurants are the barometer of a city’s food scene. Big name chefs might open concepts in trendy neighborhoods, but skyrocketing rents have forced the real culinary creatives to turn to food trucks, where they create everything from the best desserts in Miami to tacos that rival those from the best Mexican restaurants in Miami. These days, hitting a Miami food truck rally on a Saturday night gives you more inventive options than an entire season of restaurant dining—for half the price. 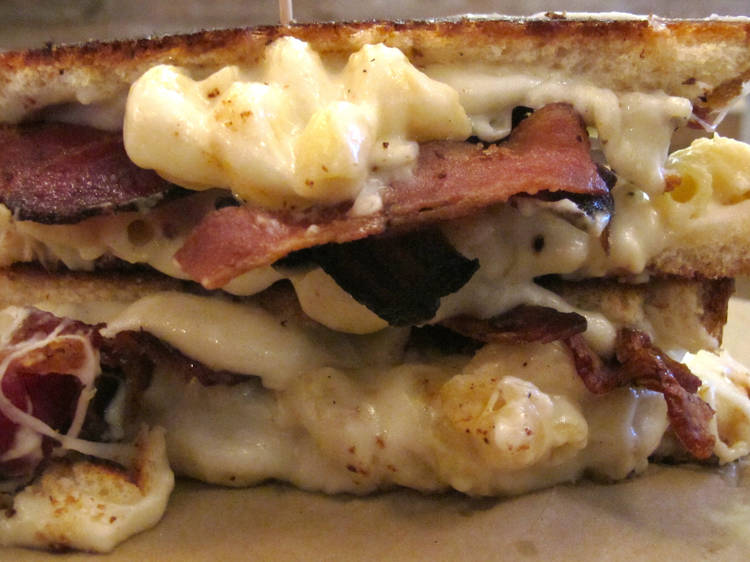 Despite roaring success in its stand-alone store and Time Out Market Miami location, Ms. Cheezious keeps it real and still roams the streets in its trademark turquoise truck. Sandwiches like the grilled bleu and bacon, the frito pie melt and the fried chicken and waffle melt have become staples of the South Florida culinary landscape. And they still taste just as delicious handed down to you from that magical window as they did in the beginning. 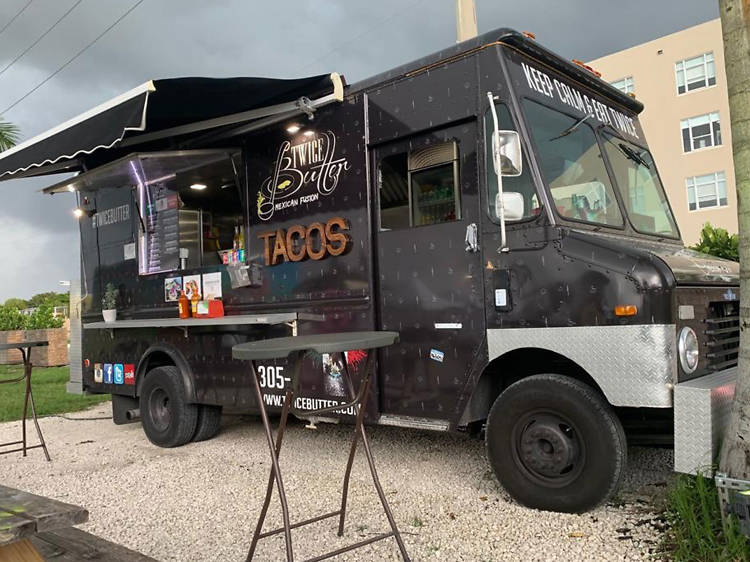 Setting itself apart from the seemingly endless parade of taco joints that have opened this year, Twice Butter is a Mexican-fusion spot that bolsters its menu with stuff like its namesake burger—with bacon, butter, chipotle and provolone—and tuna tartare tacos, which arrive served in delicate wonton shells rather than plain tortillas.

Where to find them: Very consistently camped out at 2250 NW Second Ave in Wynwood. 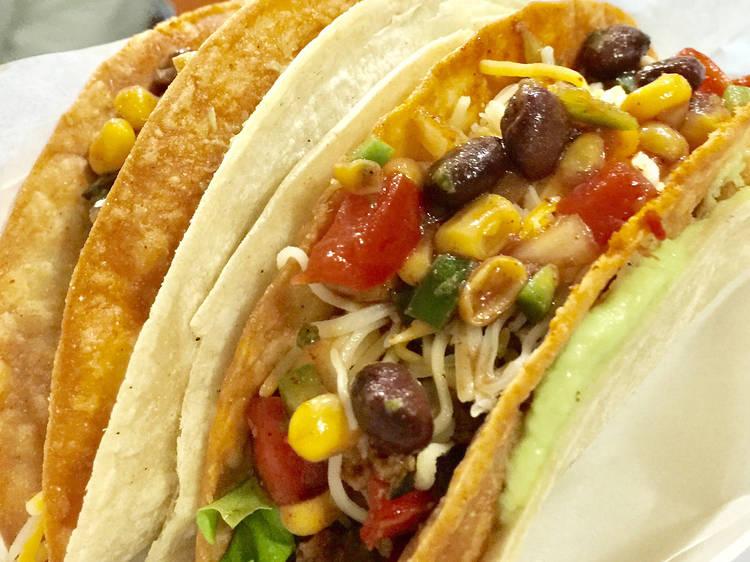 If you’ve never had a bison burger, this food truck is the place to try one. The truck is a collaboration between chefs David Shipman and Michelle Duncan and it serves up some of the most unique food to come on four wheels in Miami. The real niche, though, is the buffalo burger. The classic is a steal at $9, but—if you want to get fancy—the truffled burger with quail egg, red pepper, truffle oil and goat cheese is the best thing on the menu.

Where to find it: This truck is a frequent guest at Wynwood brewery J. Wakefield and also maintains a schedule on its website, purpleppleatery.com. 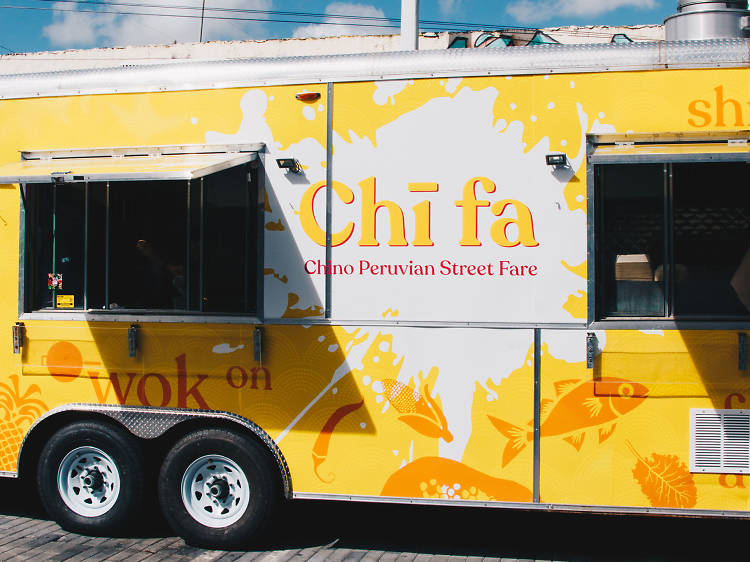 Not that the concept of food trucks at a brewery is anything new, but having one permanently parked in a brewery’s courtyard has allowed the folks at SuViche, the team behind this truck, to do some pretty cool stuff. Case in point: The Alitas, chicken wings covered in a beer eel sauce made with Veza Sur’s La Yuma dark lager in a beer eel sauce covering chicken wings. The Peruvian-Chinese fusion menu has non-beer creations too, like an entire section of anticuchos and a build-your-own udon bar.

Where to find them: In the courtyard at Veza Sur Brewing. 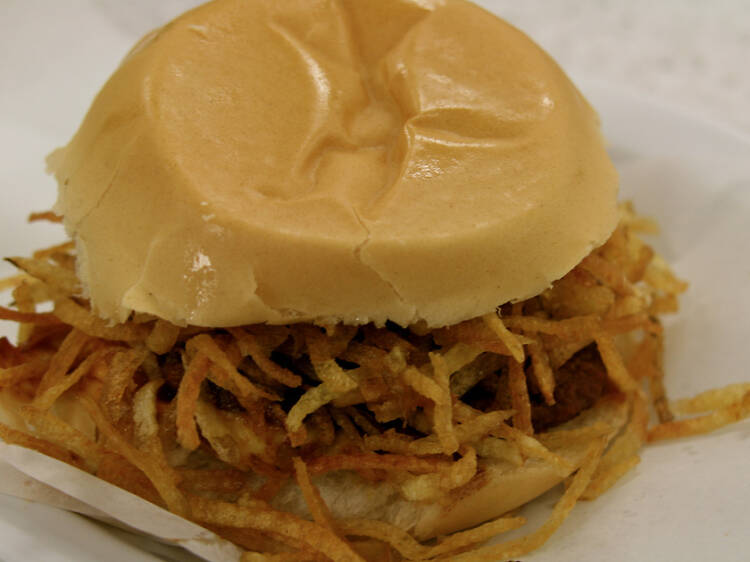 Touted as Miami’s original frita spot, El Rey de las Fritas has four brick-and-mortars in Miami, plus its big yellow food truck that makes its way across the city. While you won’t get all the options available at its permanent locations—like getting it topped with a fried egg—the trucks serve the handmade Cuban burger in all its classic glory.

Where to find it: Find it slinging fritas at Magic City Casino, at one-off events and various places around town. 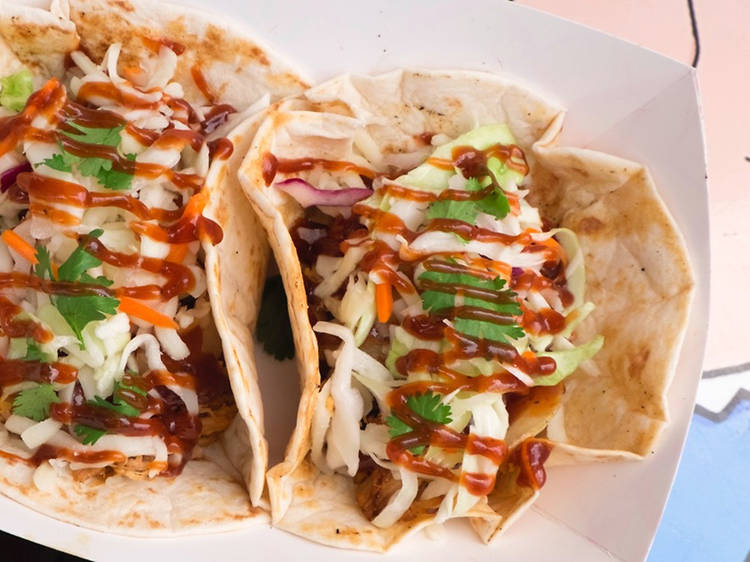 Sometimes it feels like South Florida is a barbecue desert. And then you happen upon the oasis that is King of Racks, a rolling smoked meat emporium that quenches your barbecue thirst with mouthfuls of homemade sweet and tangy sauce. As the name might imply, the go-to order here is the baby back ribs, which are slow cooked and served with creamed corn. However, if you want something that won’t leave sauce all over your face, the brisket sandwich and pulled pork tacos will have you thinking you’re square in Texas—until you feel the humidity.

Where to find it: King of Racks travels to different events and competitions around town. Keep up with its whereabouts via the King of Racks Facebook page. 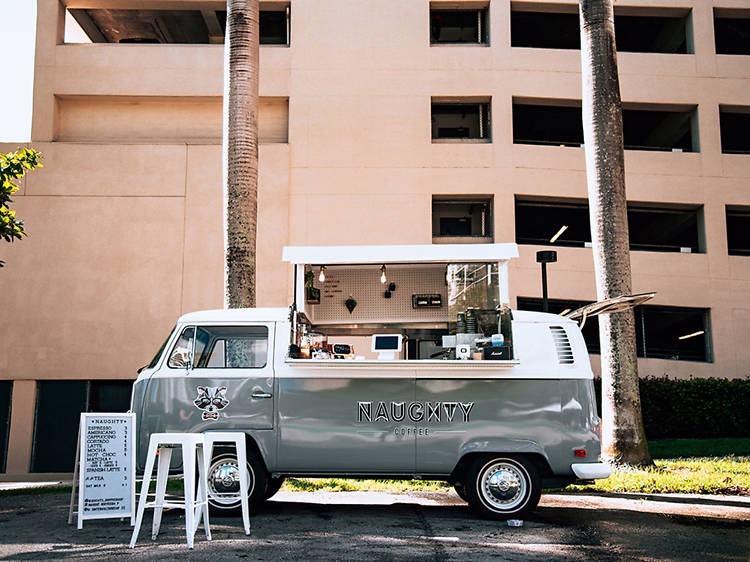 One of the cutest trucks to hit the streets this year, Naughty Coffee’s souped-up 1972 Volkswagon bus is hard to miss. It’s also the perfect snack break. Refuel with a specialty coffee, fresh-brewed tea or a variety of tasty pastries.

Where to find it: Naughty Coffee parks at the lot behind First Presbyterian Church in Brickell (609 Brickell Ave). 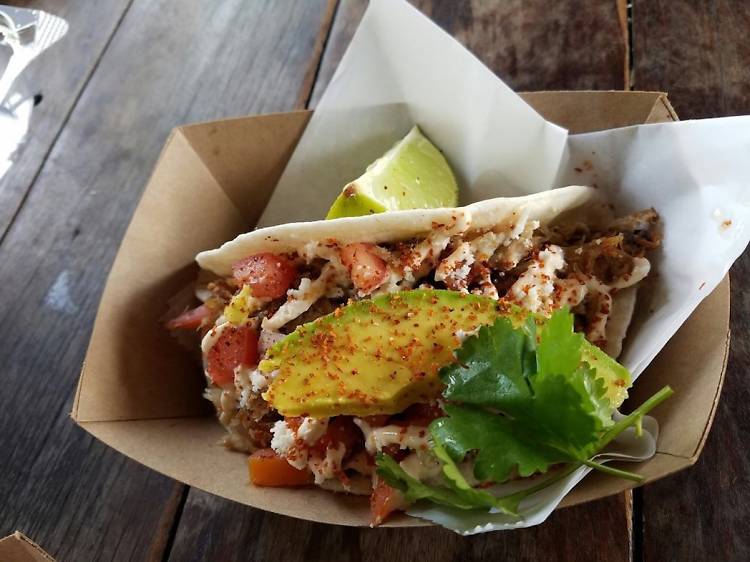 We can all get behind a food truck we don’t have to chase down or track on our phones the moment we have a craving for tacos. And this one stays perfectly put in Wynwood, where it doles out Miami’s only Cuban-style tacos. Walk up to the window and treat yourself to lechón on a soft, warm tortilla and enjoy it sitting down. They have chairs, too.

Where to find it: Caja Caliente recently opened its first brick-and-mortar in Coral Gables. But you can still find the original truck in Wynwood. 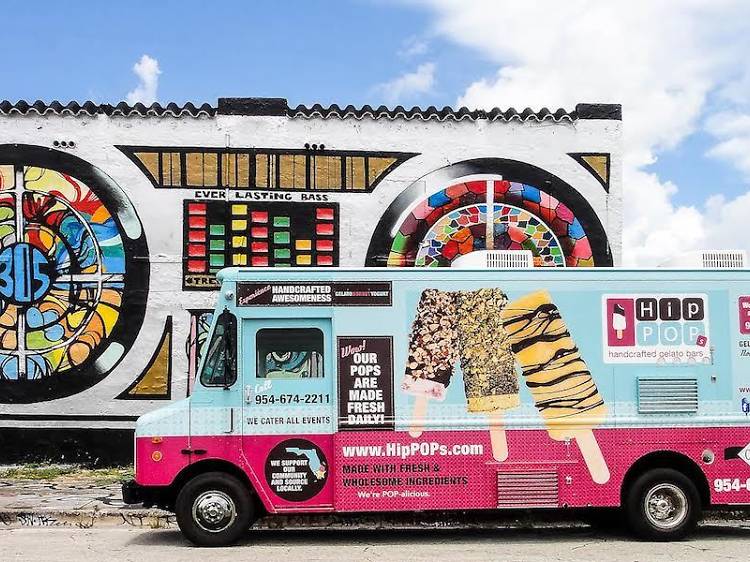 This timeless dessert truck has won pretty much every award a food truck can receive. The concept is genius: take a flavor of hand-made gelato (like Oreo, Belgian chocolate or salted caramel brûlée) dip it in one of three chocolates and then cover it with toppings such as pretzels, sprinkles or caramelized pecans. It’s the ultimate in customizable desserts and—even if you know nothing about flavors—it’s impossible to go wrong.

Where to find it: HipPOPs have proven so popular they now have a location in Dubai and a forthcoming one in Denver. But you can follow the truck’s South Florida whereabouts on its handy calendar on hippops.com. 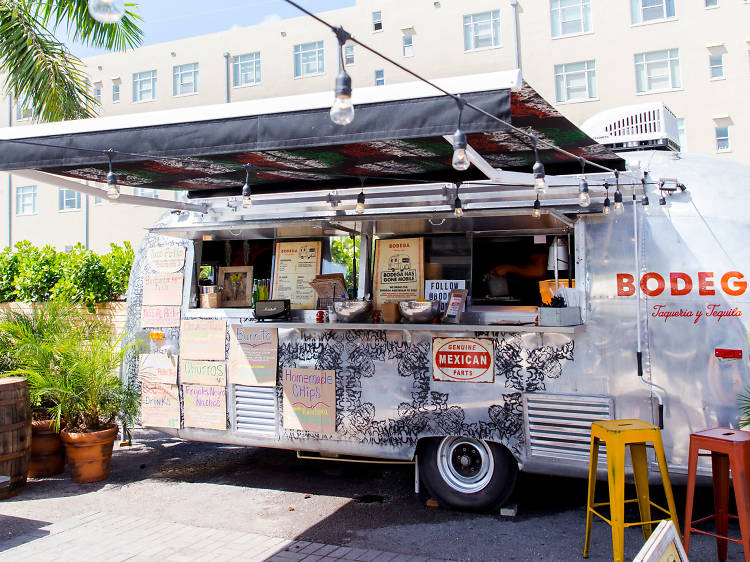 Now you don’t need to traverse the causeway to get your hands on Bodega’s yummy tacos. The Mexican spot, known for slinging tasty street food and serving up delicious late-night eats, pops up in the Design District through May 2020. From classic tacos al pastor and quesadillas to hangover-curing churros smothered in Nutella, Bodega’s stationary food truck has you covered for all things South of the Border. 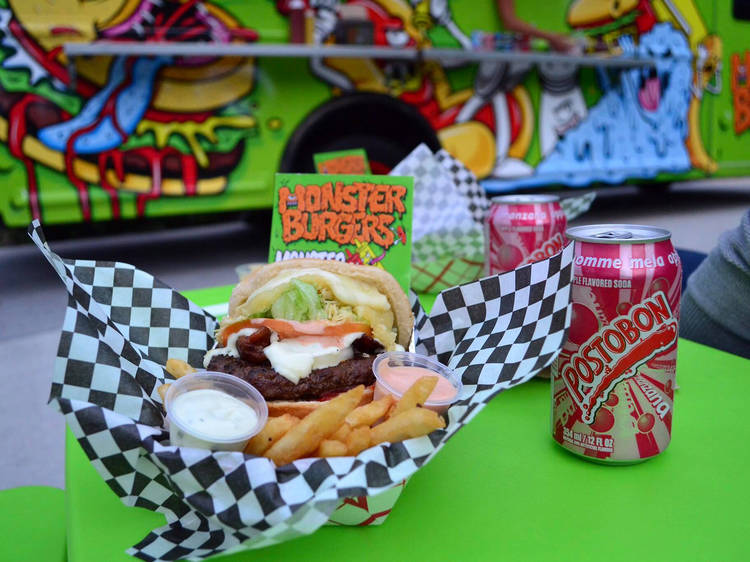 The best food truck burger in Miami can be found here, at this Colombian fast-food joint. Monster Burger serves up the best mobile flame-broiled beef in South Florida. The best part of these burgers is the crushed potato sticks atop the patty, adding an element of crunch and saltiness to the monsoon of sauces. The hot dogs are worth a try, too. Those are topped with sausage, bacon, mozzarella, the trademark Monster sauce and more potato sticks.

Where to find it: Monster Burgers is a regular at the weekly gathering of food trucks at ArtsPark (1 N Young Cir, Hollywood), every Monday from 5:30 to 9:30pm. Keep up with their Facebook page for other happenings. 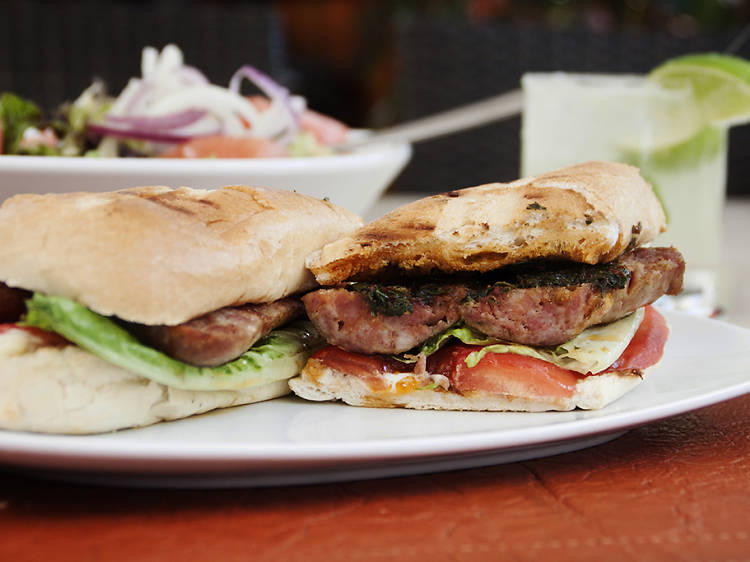 Looking to shake up your dining routine? Ditch your usual order for these tasty secret menu items at Miami restaurants.