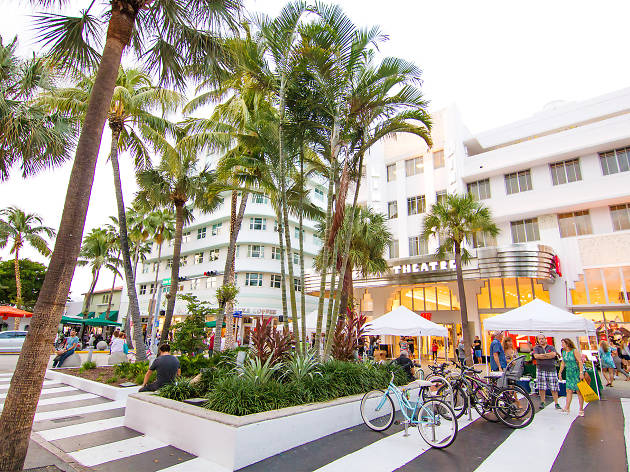 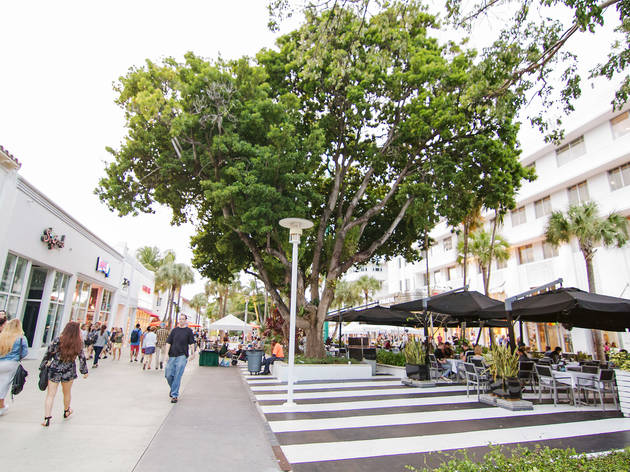 Everything you need to know about visiting Lincoln Road Mall, Miami Beach's most popular outdoor shopping strip (Between 16th and 17th Streets from Washington Avenue to Alton Road).

What do today's trendiest stores, hottest restaurants and most talked about bars have in common? You're likely to find them all in Lincoln Road Mall, Miami Beach's popular pedestrian strip and outdoor shopping area in the heart of South Beach. Whether you're looking to people watch, go for a stroll or indulge in some serious retail therapy, Lincoln Road (as the locals call it) is where you'll go in Miami to find it.

The Lincoln Road Mall—or, in local shorthand, "Lincoln Road"—had its heyday in the 1950s, when it was designed by iconic architectural guru Morris Lapidus and dubbed the "Fifth Avenue of the South." And just as Lapidus went through an unpopular period before coming back into fashion in the 1990s, so Lincoln Road waned before experiencing a resurgence as the prime South Beach spot, especially for locals jaded with the preening crowds on Ocean Drive. Gussied up in 1997 with a $16-million facelift, the mall sits between 16th and 17th Streets and stretches from Washington Avenue to Alton Road.

Shop till you drop

One word brings locals and tourists alike to Lincoln Road: Apple. The tech giant relocated to a new, bigger space up the street in 2015 (1021 Lincoln Rd, Miami Beach), where it continues to draw crowds in search of the latest iPhone, iPad and other gadgets. High-end fashion reigns at 1111, where Miami-based Alchemist and British giant Ted Baker both have shops. Other retailers along Lincoln Road Mall include All Saints, BCBG, Forever 21 and H&M.

Lincoln Road Mall is adjacent to numerous indoor parking garages and outdoor lots, plus streets lined with metered parking. Options for parking garages include: 17th Street, which is the area's largest and least expensive at just $1/hour up to eight hours (640 17th St, Miami Beach);  the Pennsylvania Avenue garage across the Fillmore Miami Beach and New World Center is also $1/hour, though this lot has fewer spaces than the others (1661 Pennsylvania Ave, Miami Beach); the City Hall Garage is equipped with automated pay stations instead of a ticket booth with attendants but parking is also $1/hour up to eight hours (1755 Meridian Ave, Miami Beach); the Drexel Avenue garage, which is at the eastern tip of Lincoln Road) has covered parking and is typically a $10 flat rate on weekends (1601 Drexel Ave, Miami Beach); and the newest addition to the block, 1111—a stunning residential/commercial/parking building designed by Swiss architectural firm of Herzog & de Meuron—also offers hourly parking (1111 Lincoln Rd, Miami Beach).

Things to do on Lincoln Road

It's wall-to-wall sidewalk cafés (Meat Market and Segafredo are both musts when in the 'hood), clubs, boutiques, high-end retail shops, restaurants, cultural venues and galleries. Once, those businesses might have qualified as legitimately avant-garde, but after the renovation, rents soared and today most of the shops on Lincoln Road are chains—it now has more Starbucks than entire cities in America's Midwest. The Road crowd—male and female, both—come equipped with airdogs and wheeled feet. Busiest time is late evening, when the dozens of cafés and restaurants set up sidewalk tables for the bridge and tunnel crowd. Sundays are popular for the Lincoln Road Antiques and Farmers' Market. Cultural venues on Lincoln include the Colony Theatre, a deco gem that hosts theater, dance and music performances. At the mall's western end is the fairly recent addition of the Regal South Beach cinema.

Our Time Out Miami editorial team is constantly updating and reviewing the best attractions, activities and venues across the city, so that you're always in the know, with the best of Miami at your fingertips. Lincoln Road Mall was most recently updated with new tips on June 28, 2017.