Let’s Do Lunch: With the Naughty Fork and Officially Efrain

Welcome to our new series, Let’s Do Lunch, where we invite local luminaries, influencers and tastemakers to break bread with us at Time Out Market Miami and dish on what’s happening in the city. For our first chat, we sat down with lifestyle influencer Efrain Bueres of @officiallyefrain and food blogger and South Beach native Sam Schnur, better known as @thenauhtyfork. The two had plenty to say about Miami, including what’s lacking in the city, where they go to avoid crowds and the most underrated date spot in SoBe.

It’s your first time at Time Out Market Miami. What’s your take on it?

Sam: This place 100 percent fills a void. This might sound cheesy, but I feel like when someone like Time Out wants to open a market here, it means that Miami is a place that’s growing. We have a lot of catching up to do as a city but when something like this opens up, I know we’re on people’s radar as a foodie city. It gives me hope.

What do you wish there was more of in Miami?

Efrain: Miami is lacking in areas where people can just chill and meet friends. Like the park in front of the Eiffel Tower or the gardens you see in Singapore where people can go have some wine and hang out. Miami doesn’t have anything like that; everything here costs money. That’s why Lagniappe does so well—you can go grab a cheap bottle and sit down outside.

But it’s so hot here!

Efrain: I would die of sweat drinking outside. Miami needs an indoor park. That would be insane. Like it’s super hot outside but you can go inside where there are trees and grass you can picnic on—but there’s A.C. Like a WeWork kind of place but you’re hanging but instead of working. That would be sick.

Sam: When the weather’s nicer, I go to South Pointe Park with my friends and watch the cruises go by. We’ll get wine and cheese and it’s literally the best—it’s better than the Eiffel Tower. Whenever someone asks where they should go on a date that’s cheap, I always tell them to get a bottle of wine and cheese and sit [at South Pointe] and talk.

What’s your favorite place to go in Miami?

Efrain: Everything [fun] is a membership in Miami...I go to Soho Beach House. It’s just so easy. If I need something, it’s there.

Sam: I go to the Standard a lot for happy hour. It’s also a members’ place. I’m also a member at Soho, which I love but it’s expensive.

In terms of food and nightlife, how has Miami changed over the last few years?

Efrain: I feel like Miami’s growing super, super fast. Even my friends who come visit from New York say there’s so much more to do. You’re never bored in Miami.

Sam: Miami’s food scene has taken a long time and it’s not anywhere near other cities, like Chicago or L.A. I’m constantly competing with people in those cities who have access to cool, crazy food. When something like Time Out Market opens, it excites me. I’m like, finally, you know.

What cuisine is underrepresented in Miami?

Sam: Lebanese. I’ve been to the Middle East twice in the past year and there’s something so amazing about Lebanese food—the mezzes, pita, everything. Mandolin is amazing and Santorini is pretty good, too. But we don’t have many more in Miami.

What message are you trying to convey through your online presence?

Sam: I think for me it’s about involving food but also having a healthy lifestyle, and the fact that I eat but I also work out and look good. (I do Solidcore four times a week and I feel great, but I also can’t really move.) It’s not always about indulging too much. Miami is all palm trees, beaches and beautiful scenery, and everyone is working out and eating healthy. My theme is bright and beachy, with food. It’s indulgent, but not the ugly side of indulgence.

Efrain: I try to shine a classier, nicer, more put-together version of gay Miami. It’s a lifestyle that appeals to gay and straight. Gay influencers in Miami on Instagram are usually in a thong on South Beach. I want to curate a different Miami that’s not just Speedos and people doing drugs and poppers in the middle of South Beach. It’s also about rooftops and places like this, Time Out Market. I mean, I do throw some thirst traps in there for the following, but it’s not my image. 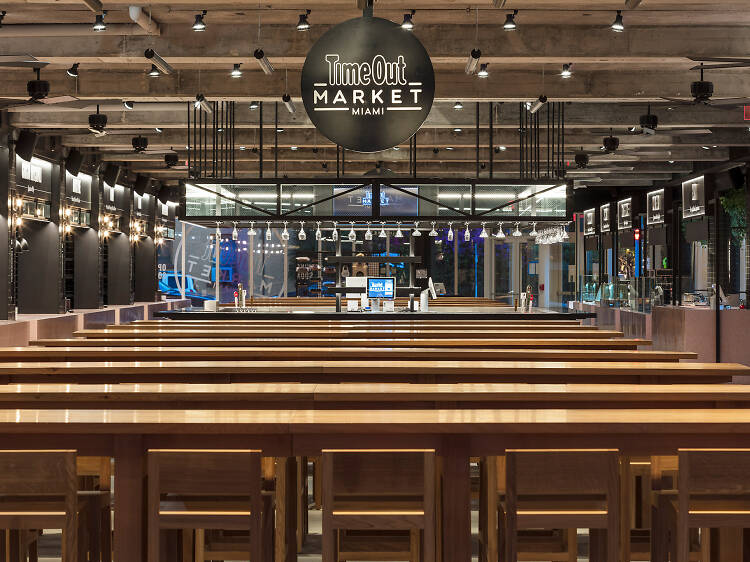 Here’s a guide to the Market eateries