We’ve applied 26 handy labels to the 100 great animations in our list. Here you’ll find all the films that are most suitable for adults, not kids.

But how many have you seen? Take our poll to find out.

RECOMMENDED: Explore the 100 best animated movies ever made 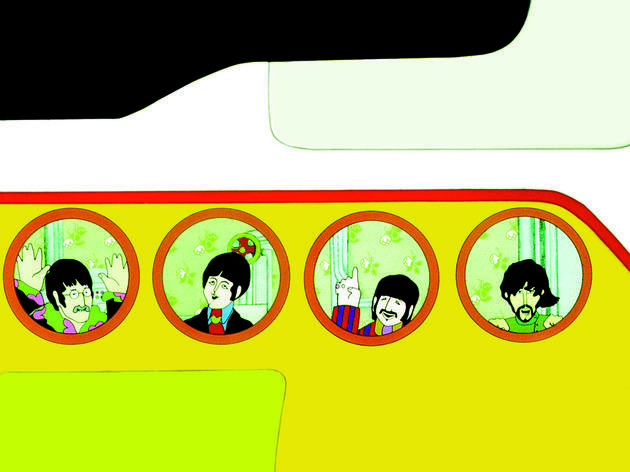 The cartoon Beatles rampage through a psychedelic Pop Art dreamscape.

Best quote: “Nothing is Beatleproof!”

This may prove to be the most divisive film on our list: Hardened Beatlemaniacs will tell you that Yellow Submarine is a travesty, employing fake (and not especially convincing) Liverpudlian accents to tell a nonsensical tale steeped in late-’60s acid-fried sentiment, never mind that the Fab Four pop up in person at the end to give their blessing. Art maniacs, meanwhile, will tell you it’s a dazzling work of the imagination, harnessing every animation technique available at the time to create an eye-frazzling, insanely inventive trip. To be fair, they’re probably both right: The script is silly, the story is cringeworthy, and the Beatle characterizations are a bit soft. But visually it’s breathtaking, one of the few genuinely hallucinatory cinema experiences, and fully deserving of its high placement here.—Tom Huddleston 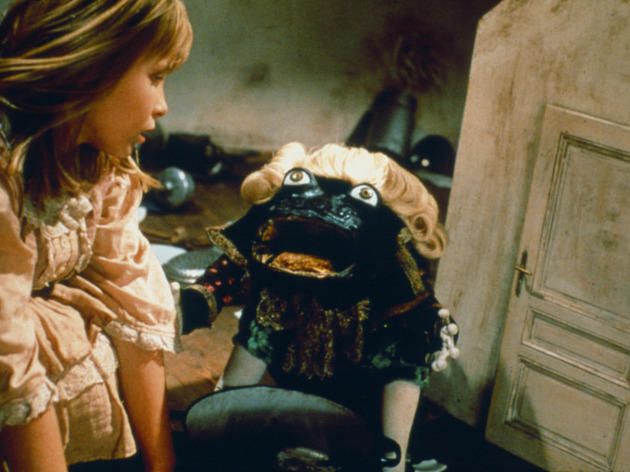 This Lewis Carroll adaptation, from a brilliant Czech surrealist, is too wild and wonderful for kids.

Best quote: “Alice thought to herself, Now you will see a film…made for children…perhaps.”

Jan Svankmajer’s first feature is a characteristically inventive but rigorous account of Lewis Carroll’s Alice’s Adventures in Wonderland, faithful in spirit to the original while remaining conspicuously true to his own highly distinctive brand of surrealism. Blending live action (Kristyna Kohoutová, who plays the heroine, is the only human in the film) with various forms of stop-motion animation, Svankmajer creates a wonderland notable for its bizarre dreamlike logic and its grotesque beauty: Skeletal creatures scuttle and steaks crawl while Alice, no stranger to thoughts of cruel whimsy, changes size and becomes her own doll. It’s brilliantly imaginative, bitingly witty and fittingly Freudian. This is no saccharine celebration of innocence, but a foray into the darker recesses of childhood fears and desires. And therefore, perhaps not a film for children.—Geoff Andrew 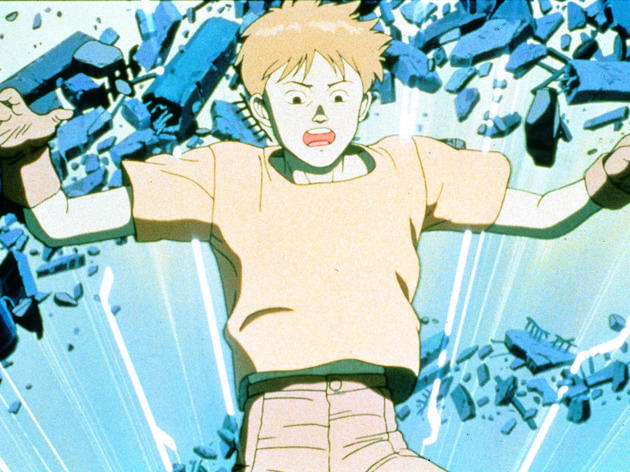 A biker teen unleashes a psychic with apocalyptic powers—oh, and it’s 2019.

Best quote: “The future is not a straight line. It is filled with many crossroads.”

Defining moment: Motorcycle gangs tear through the night destroying all in their wake—a scene that would give Mad Max chills.

Anime’s breakout moment, this supercharged sci-fi thriller turned a niche subgenre into a global phenomenon: Western teens started using the term cyberpunk in casual geek-speak, while Japan’s printed manga suddenly flew off the shelves. To the nonfan dragged along for the ride, the movie felt a lot like Blade Runner and Brazil, featuring incredibly vivid details and attention paid to urban decay. But Akira was also a watershed moment for sci-fi in a larger sense, popularizing ideas of citywide ruination, futuristic rebirth and a distinctly Asian notion of psionic powers that would influence everything from The Matrix to Inception. The mutable setting of Neo-Tokyo anticipated the larger playground of the Internet, still years off but somehow of a piece with these youthful speed racers.—Joshua Rothkopf 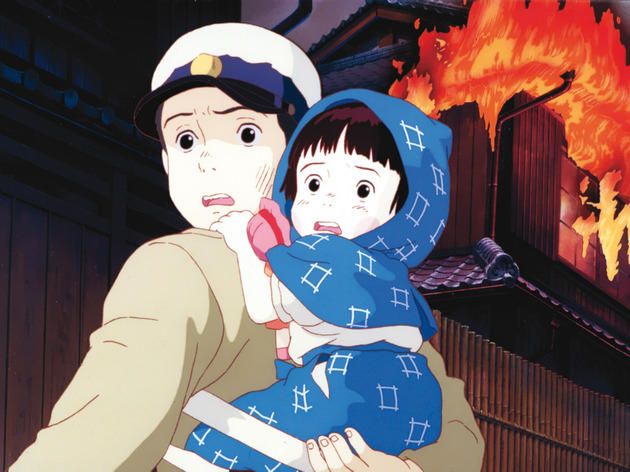 This unflinching war story proves that, in animation, anything is possible.

Defining moment: We don’t want to spoil it for those who haven’t seen it, but it features one of the most heart-wrenching character deaths in movie history.

The year 1988 saw Studio Ghibli at the peak of its powers, releasing a pair of richly personal tributes to youthful resilience that proved the breadth and brilliance of their work. My Neighbor Totoro (coming up!) was studio founder Hayao Miyazaki’s masterpiece, a work of wondrous beauty and grace. But it’s matched—some would say surpassed—by Isao Takahata’s Grave of the Fireflies, perhaps the bleakest and least forgiving film in our top 100. Set in the midst of WWII, the story follows two children, Setsuko and Seita, as they lose their mother in an American bombing raid and are forced to fend for themselves. At first it’s all a game, but as sickness and starvation begin to intrude, the film deepens and darkens, ultimately reaching a place of complete emotional exhaustion and absolute, devastating grief. This is not a movie to be taken lightly.—Tom Huddleston 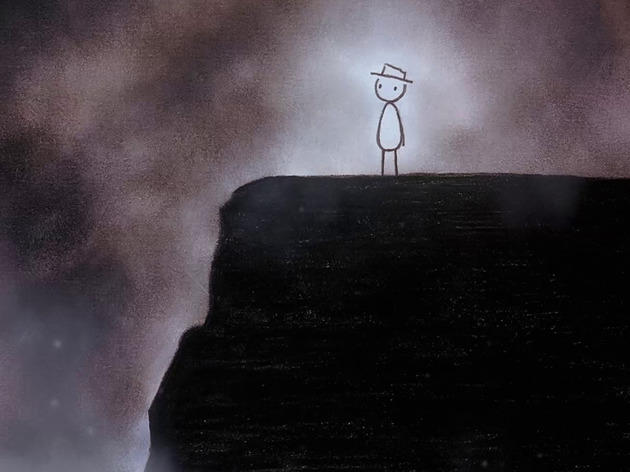 Best quote: “Someone sits on the shore and tells him how the waves have been there long before Bill existed, and that they’ll still be there long after he’s gone. Bill looks out at the water and thinks of all the wonderful things he will do with his life.”

Defining moment: In the epic finale, a stick hero is reborn into an ageless existence and learns all the secrets of the universe.

How satisfying it is to find Don Hertzfeldt’s self-made saga of schizophrenia and self-loss nestling comfortably in the higher reaches of our rankings. Written, directed, produced, animated, photographed, voiced and distributed entirely by Hertzfeldt himself (he admits to getting a little help with the editing), It’s Such a Beautiful Day is the tale of a young everyman, Bill, who finds his mind and his world unexpectedly going to pieces. Hertzfeldt’s style may have started off simple, with stick figures and basic line drawings, but by the time of this feature, it had broadened to include a dizzying array of in-camera, nondigital visual effects. The result is one of the great outsider artworks of the modern era, at once sympathetic and shocking, beautiful and horrifying, angry and hilarious, uplifting and almost unbearably sad. Seek it out.—Tom Huddleston 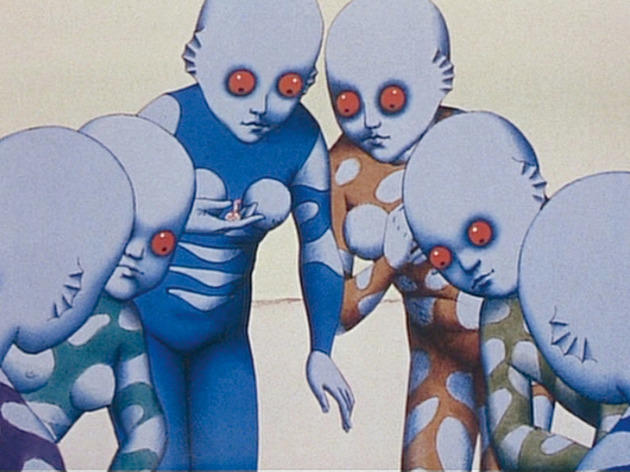 Best quote: “I was only a tiny toy, but on occasion a toy who dared to rebel.”

Defining moment: A mother runs in terror cradling her child, only to be picked up and flung to the ground by a giant blue hand.

Take the big’uns-versus-little’uns conflict from Gulliver’s Travels, sprinkle with the Blue Meanies from Yellow Submarine, add a political allegory as forceful as Orwell’s 1984 and you’re beginning to grasp this unique combination of Gallic creativity and Czech production expertise. No other animated feature looks like this, since planet Ygam and its weirdly wonderful inhabitants are drawn in a deliberately antique fashion, like some illustrated bestiary from before Columbus set sail. The tiny Homs (think hommes, French for “men”) are kept as pets by their otherworldly conquerors, the giant Draags (perhaps drogues, French for “drugs”), but they have the spirit and ingenuity to turn the tables on their technologically advanced yet dangerously self-absorbed masters. This definitely prefigures the world of Hayao Miyazaki’s Nausicäa, even if it lacks his robust storytelling and crisp action. It’s a ’70s landmark all the same.—Trevor Johnston 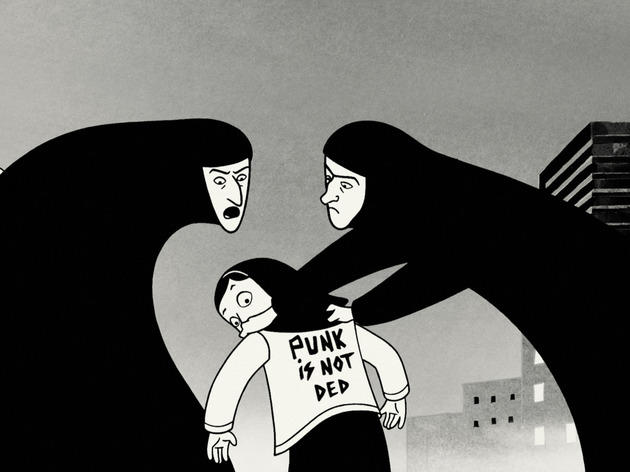 An Iranian expat remembers her tumultuous childhood during the Islamic revolution.

Defining moment: Young Marjane talks her way out of a tough spot after buying an Iron Maiden bootleg.

Between 2000 and 2003, French-Iranian artist Marjane Satrapi published a well-received autobiographical comic detailing her coming-of-age during and after the Islamic revolution. When the opportunity arose to make a film, Satrapi took on the task herself, with the aid of comics colleague Vincent Paronnaud and an all-star voice cast featuring Catherine Deneuve and Danielle Darrieux, among others. Aside from a framing section in color, the film mimics the high-contrast black-and-white inking of Satrapi’s four-volume graphic novel. The simplicity of the visuals helps universalize the story, which is filled with plenty of the usual travails of growing up (troubles with boys, clandestine parties, etc.), though always viewed in pointedly thumb-nosing contrast with the oppressive regime that wants to keep the populace—especially its women—in check. Persepolis is infused with its creator’s ingratiating rebelliousness, as well as her melancholy for a homeland torn apart by still-rampant social and political divides.—Keith Uhlich 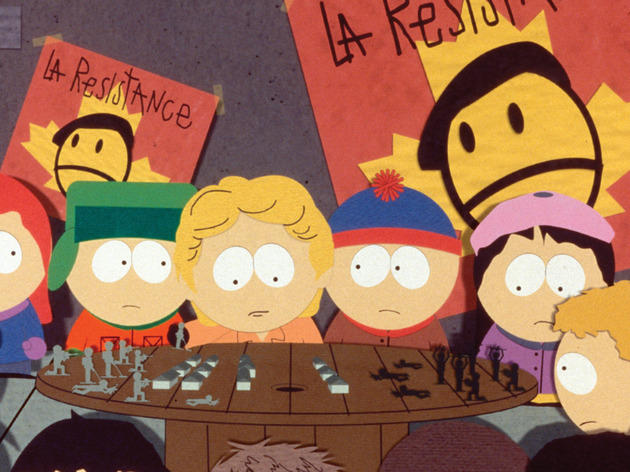 Freed from the constraints of network TV, prepubescent paper-cut terrors go on the rampage.

Best quote: “That movie has warped my fragile little mind.”

The Broadway-conquering, Tony-sweeping success of Trey Parker and Matt Stone’s stage musical, The Book of Mormon, took many by surprise—but only the sort of people who wouldn’t have touched the South Park movie with a conductor’s baton. If they had, those audiences would have known that the Coloradans were not merely purveyors of taste-baiting trash for sniggering schoolboys, but the slyest, smartest and (yes) most tuneful satirists America had produced since, well, ever. And South Park Bigger Longer & Uncut remains their defining statement, a work combining epic scale (a land war with Canada, a trip to the depths of Hades, a daylight raid on the Baldwin compound) with intimate character comedy (Satan’s grief over his lover Saddam Hussein’s infidelity is genuinely touching), wrapped in a biting commentary on censorship and topped off with belting show tunes worthy of West Side Story.—Tom Huddleston 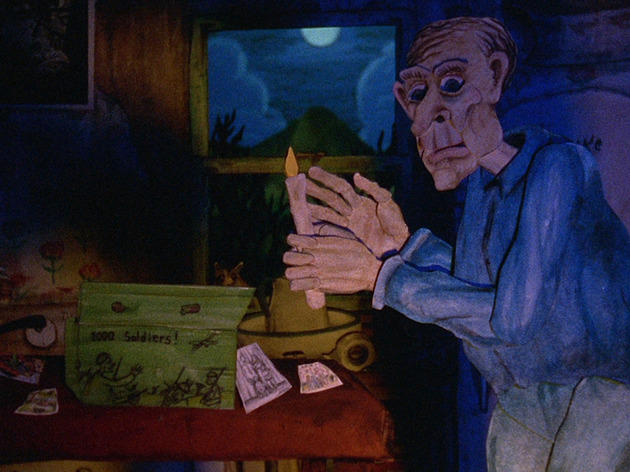 A one-man, multidiscipline labor of love.

Best quote: “I do not suggest using ashes as fertilizer—these bitter urns of charred memories soak into the soil and leave a blackened taste on the lips.”

Defining moment: A scratchy, pencil-sketch scene of loss, as the authorities come to take away little Lydia and Victor Blue.

Surely the most obscure film on our list, Consuming Spirits is the result of more than a decade’s work for writer, director, animator, musician and voice artist Chris Sullivan and his small team. Running 136 minutes and encompassing more than 230,000 individual frames, this epic achievement combines cutout, stop-frame and pencil sketches and a beautiful soundtrack steeped in mountain folk. But as with any great animated movie, it’s the emotional content that’s most rewarding. Set in a small Pennsylvania town, this is a poetic, downbeat tale of three characters united by disappointment, alcohol and a haunted past. Thanks to an extremely limited U.S. release, Consuming Spirits is little known even within the animation community, but almost everyone who voted for it here made it their number-one choice.—Tom Huddleston 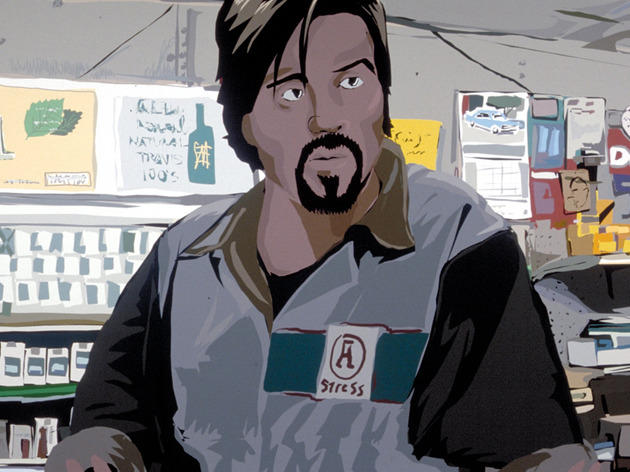 Conversations swirl in a treatise on the need to stay curious.

Best quote: “Are you a dreamer? I haven’t seen too many around lately.”

Trippiness of a highly verbal nature wasn’t unexpected from the director of Slacker and Dazed and Confused. Still, Richard Linklater’s hypnotic plunge into rotoscoping proved a litmus test even for his fans: You either let the flow of cosmic ideas sweep you up in a stimulating rush or you checked out somewhere. In either case, the filmmaker’s creativity was undeniable. Friends morph into banks of fluffy, chatting clouds; flirters launch words like love into earholes. Amateur philosophizing was never so well-supported or flattered by its form. Fans of Before Sunrise noticed Julie Delpy and Ethan Hawke lounging in bed (a hint of two sequels yet to come). Yet for the most part, all footholds evaporated. Waking Life was—and still is—a surreal invitation to cut loose.—Joshua Rothkopf

If you like grown-up animated movies, you should try… 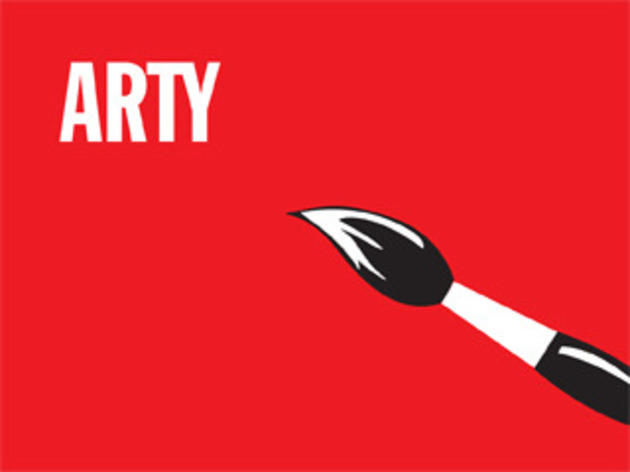 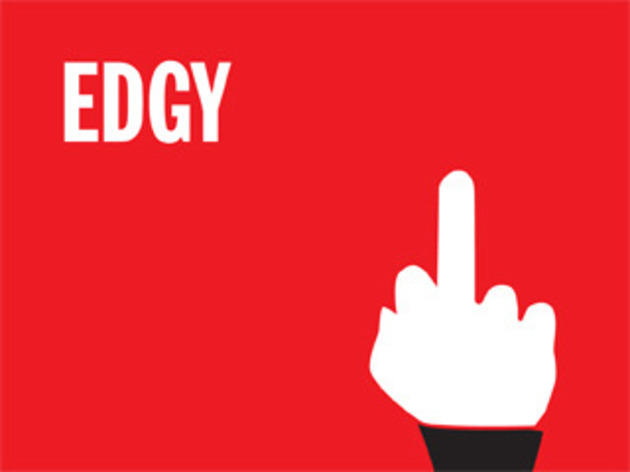