Outside: a thick snowfall. An icy midnight silence. But if you were in the theater during that shivery January weekend when Hereditary first traumatized its Sundance audiences, you were surrounded by a riot of noises.

They mostly came from those of us in the crowd: low moans of dread exploding into full-throated shrieks, then laughter at how completely owned we were. A hypnotic stretch of stillness, followed by a quiet, John Carpenter–worthy reveal (and a wave of impressed applause). Finally, afterward, loading into the festival bus in a stunned, post-film daze, one perverse viewer clucked his tongue—a recurring motif in the movie—and everybody jumped. “Thanks a lot,” someone groused.

“The hyperbole has been fun to soak in,” admits 31-year-old writer-director Ari Aster, responding to the praise that’s mushroomed around his feature debut, a supernatural nightmare about a suburban family’s descent into hell. “I think that’s probably not healthy,” he adds quickly. “I wasn’t aiming to make a horror landmark—I was aiming to make a horror film that I would like. Because I haven’t liked any in a long time.”

Over a few beers at April’s genre-centric Overlook Film Festival in New Orleans, where Hereditary also killed, Aster is a sweet guy, prone to shy smiles, thoughtful pauses and self-deprecation. He’s somebody who listens to Martin Scorsese interviews on his iPhone, a geek who’d rather chat about Criterion Blu-rays than opening grosses.

Ari Aster and Toni Collette on the set of Hereditary

Partly, that’s why Hereditary feels so major and why it’s unsettled so many people, even horror connoisseurs who pride themselves on their resilience. Aster, an AFI grad who generated buzz with his subversive thesis short “The Strange Thing About the Johnsons” (it’s on YouTube, if you dare), can hold forth on the camerawork of masters like Roman Polanski and Kenji Mizoguchi, but he’s never far from the human element, which makes his Utah-shot movie seem deeper than the effort of a brilliant student.

“There are so many films that work as roller-coaster rides,” Aster explains, “and, at the end, everything’s okay and you go home. I was very clear with my crew: Let’s not talk about this as horror. This is a family tragedy that curdles into a nightmare. We watched a few Mike Leigh films—he’s probably my favorite—All or Nothing and Secrets & Lies. I was like, ‘Let’s watch vividly realized family dramas.’ ”

That long-view seriousness is what attracted Aster’s top-flight cast, atypical for a first-timer’s indie production. In between scares, we’re treated to psychologically acute turns by Gabriel Byrne, teenager Milly Shapiro (a Tony honoree for Matilda), a fearsome Ann Dowd (The Handmaid’s Tale) and, most memorably, Toni Collette, whose daredevil performance as Hereditary’s grief-stricken mother—desperate for solutions, even if they involve evil spells—is already gathering a deafening amount of Oscar chatter.

“It was so brilliantly written, it felt to me like The Ice Storm,” Collette gushes, no stranger to working with young directors (her performance in The Sixth Sense was for a then-28-year-old M. Night Shyamalan) but still in awe of Aster’s total command. “It’s been a long time since I’ve felt that a director was as in it as I was. I could completely trust him. He’s very much an important new voice. Ari’s the real deal.”

Collette is a genius when it comes to sustained fits of heartbreaking mania—if you need proof, see Velvet Goldmine—but Hereditary pushes her to heretofore unexplored edges. “It was a bit exhausting, I have to say,” she says. “It’s a movie that takes its time. My character has something unhinged within her to begin with, something vulnerable, so when the horror sets in, it almost feels like another film.”

Aster owns up to a little trepidation working with Collette, though it comes out like empathy: “What I’m asking from the actors is difficult. It’s emotionally athletic—pummeling, even,” he says.

He will go to those lengths again: His next film, shooting this summer, is also horror, and, like Hereditary, it’s with the maverick studio A24, purveyors of Moonlight and Lady Bird. “[My projects] demand a certain amount of invention to make them work,” Aster says, hinting at a trajectory that he hopes will lean into “dark comedy.” Wherever he goes, he won’t be letting us off the hook. “With Hereditary, I wanted to make a film about what bothers me about life,” he offers cryptically, only weeks away from bothering a great many people. 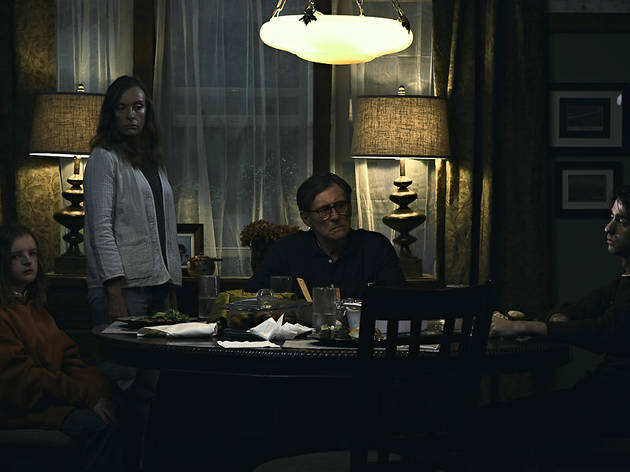 Catastrophe rains down on a beleaguered family, in a horror movie that brews an impressive amount of dread.