The 10 best hotels in Niagara Falls

Looking for a hotel with some of the best views in the entire world? No exaggeration, you’ll find them here

The dramatic Niagara Falls, which straddles the US/Canada border, is undoubtedly a natural spectacle, but this is far from a wilderness either. Both banks have developed as resorts, so there is plenty of things to do here other than look at loads of rapidly falling water too. From throwing cash at casinos to vicariously being a piece of water on the Falls by sliding down slides at the water parks. There are also the 1,400 LED lights twinkling behind the cascades nightly to go and awe at. Visitors can eat their way through a fine farm-to-table restaurant scene, complemented by a menu of local Ontario wines too. Yup, Canada has good wine game.

The Canadian side is closer to the most dramatic torrents but also the more commercialized. Of course, given the huge attraction, hotels dominate the landscape, largely of the chain variety (for more characterful lodgings, try pretty Niagara-on-the-Lake, half an hour away). The sheer number of rooms makes for keen competition and off-season deals, but watch for inflated overheads. Either way, here’s our pick of the best hotels in and around Niagara Falls. And no we don't mean in the literal waterfall, that would spoil the view. 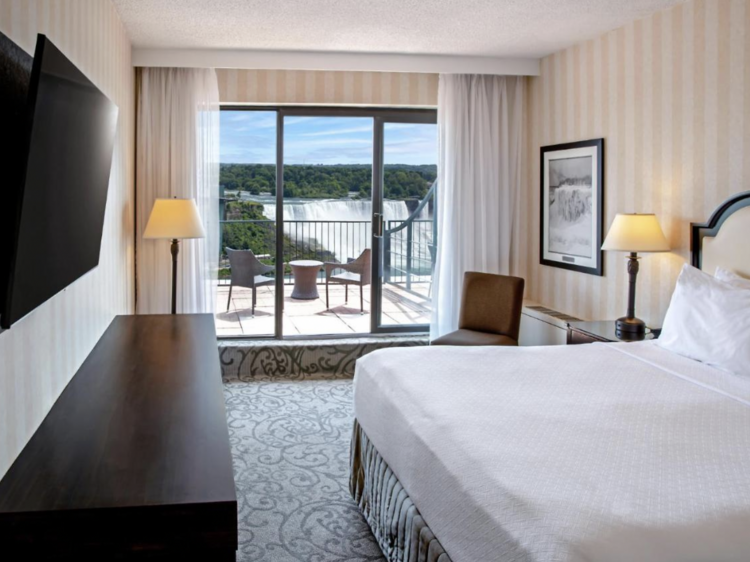 This historic four-star hotel has hosted both screen royalty (Marilyn Monroe stayed in room 801) and the British Royal family. So you know, it's pretty decent lodgings. True, some of its previous glamour has been sacrificed to the popular diversions of a water park and casino, and some rooms are small by 21st-century standards, but it still boasts its original 1929 lobby and panoramic views of all three of Niagara’s cataracts. You can gaze at these from the tenth-floor steakhouse and about half of the 230 tasteful taupe-y rooms. Plus, come on, water parks are fun – if you close your eyes on the rides you can pretend you're racing down ol' Niagara Falls themselves. 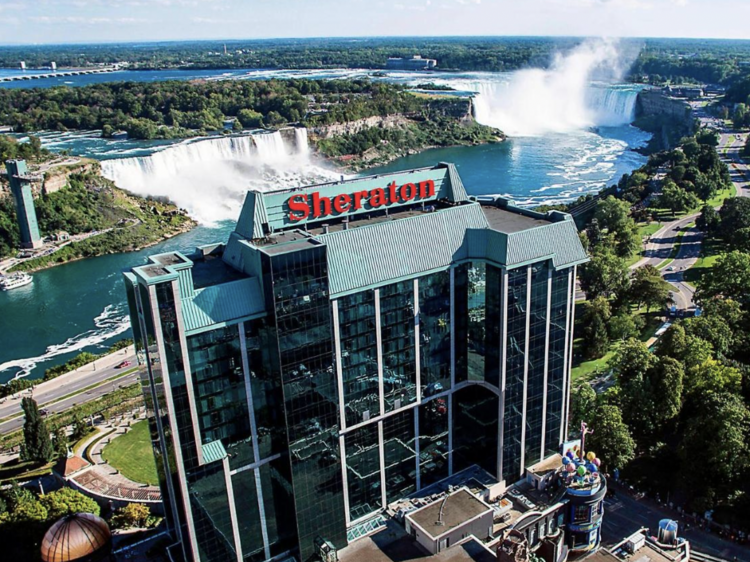 2. Sheraton on the Falls

If we’re being honest, we think that the four-star Sheraton is a teensy bit of an eyesore, with its name prominently emblazoned along the crest of its 22 stories. But that’s literally zero problems at all – if you’re staying inside it! From within, it offers not only Route 1 access to many of Niagara’s best-known attractions but spectacular Falls views from hundreds of guestrooms. Rooms have various levels of amenities and facilities, including Juliette balconies, fireplaces, and spa baths at the top end, with Sheraton’s international-classy ethos common to all. Numerous resort facilities include the Reef Beach Club with, yes, a shark tank because if water and heights weren't enough how about water heights and sharks, and a lavish spa where you can relax after all those thrills. It's connected to both a casino and a waterpark too, so you really are spoiled for things to do. 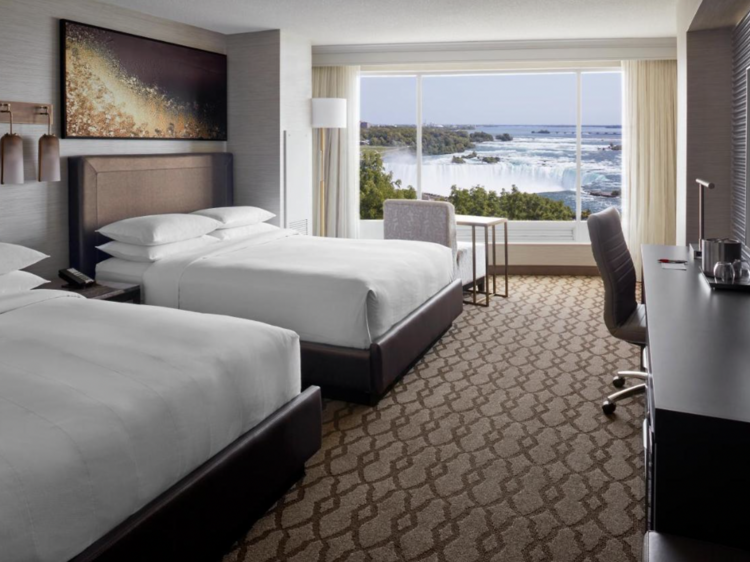 The Marriott group went big on their Niagara location. Introducing the seriously five-star outpost from the always reliable top-end chain. It has a staggering 432 rooms offering views of the Falls – guaranteed. You might wonder simply how on earth they've managed that, but it's because the site is gob-smacking, it stands on the very brink of the tumbling torrents. Look at the photo, you'd be forgiven for assuming it's a green screen. Rooms are all comfortable and spacious despite being on the forefront of nature, with comforts and prices escalating, along with the scope of the views, the higher you go. There’s a highly-rated spa plus several restaurants and bars too, including a Morton’s Grille, all with ringside seats of course. So it's a hotel that does it all, and hey, you'll basically be bored of looking at the Falls by the end they're so close and present! 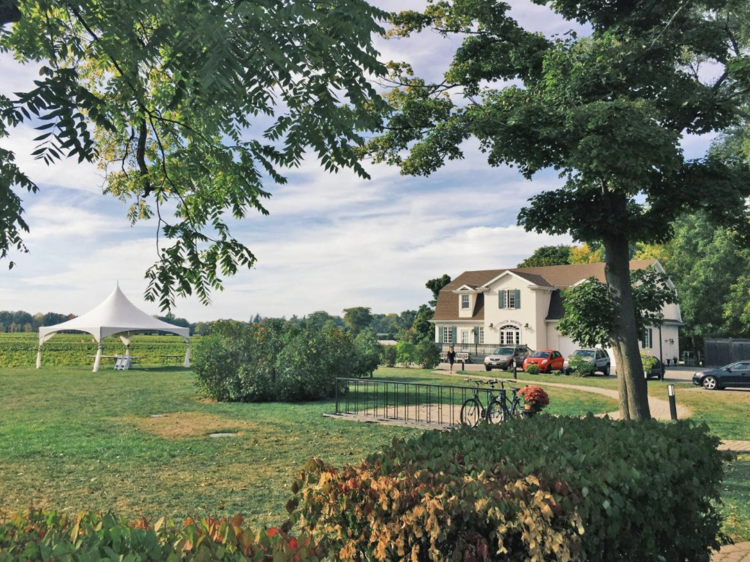 The Canadian side of the Niagara peninsula also happens to be home to prime Ontario’s wine country, and the Riverbend, which is 30 minutes from the Falls, is one of its a hundred or so vineyards in the area. The vineyard is also a country-house hotel, the house in question being an 1820s mansion set in sweeping lawns. The 21 rooms are individual, luxe, and antiques-filled, but the public areas are its particular charm. Sip an estate-bottled Chardonnay at the marble-pillared bar then dine on home-grown produce in the classy restaurant or, for maximum romance, in the gazebo. Oh yeah. and pop over to the Falls to like... you know... see it while you're in town. You'll only have people whining at you for wine-ing otherwise. 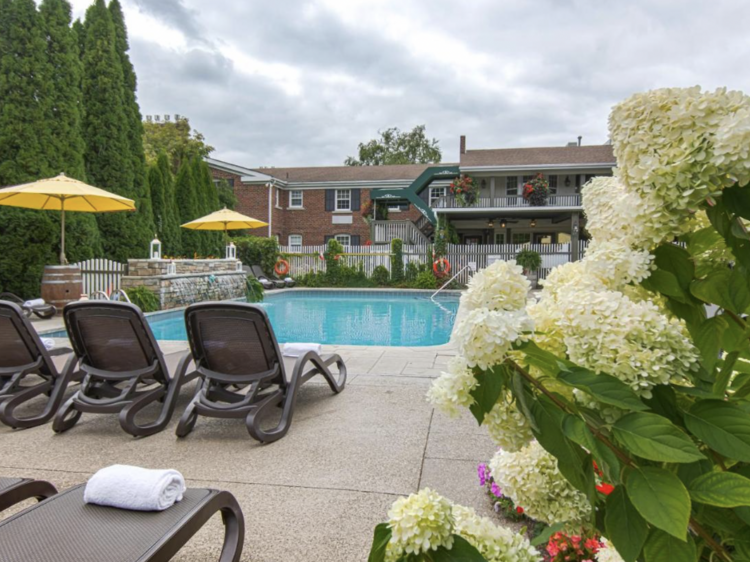 Firmly in the unforgettable because of how insanely nice it is, this much-loved hotel is a real special-occasion destination,. And we're not even sure we mean 'the special occasion of visiting Niagara Falls', we mean like special occasions. Niagara-on-the-Lake’s Pillar and Post is a copybook example of a hotel, spa, and restaurant that combine five-star international luxury with local character and a very personal vibe. Rooms are all about marble, thread count, robes, and turn-down surprises; the Italianesque dining room offers treats from the wood-fired oven, and the spa centers on outdoor hot springs. The in-house florist provides gorgeous displays throughout. The Falls are actually a short car journey away, but there are views galore, a golf course, and an outdoor swimming pool very much on the doorstep. 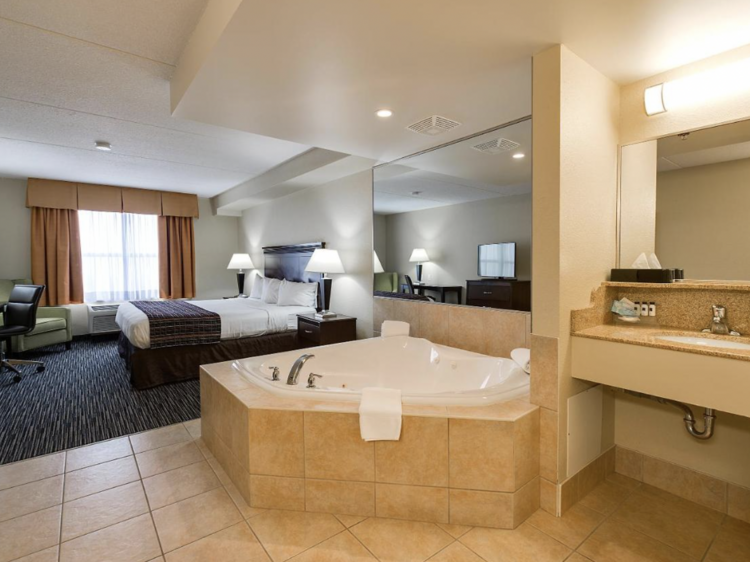 For the optimum convergence of price, quality, facilities, and location, this simply can’t be beaten. The bang for your buck is frankly, mega/ It’s a well-kept, regularly updated, and comfortable branch of the classy (if cookie-cutter) chain, with a faux but fun country club feel. At a 15-20 minute walk from the Falls, less from the tourist attractions of Clifton Hill, it offers big rooms and relatively cheap parking. And sure, there's not much of a view (especially if you're on the bottom few floors), but there is a hot breakfast included, a large pool, and complimentary cookies. If you want views, you're probably going to go to the Falls themselves anyway, aren't you? 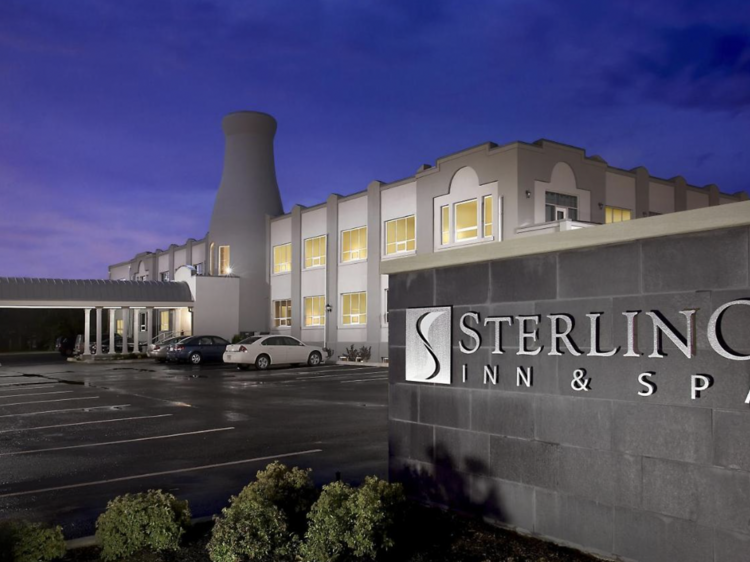 The Sterling’s claim to be Niagara’s only boutique hotel isn't as bold as you'd think. Backed by a distinct individuality and some luxury touches, this former dairy – as the enormous milk bottle fronting the 1925 building announces loudly – has comfortable 40 spacious rooms. They share a suave contemporary elegance, let's tell you how: All have jetted tubs and fancy showers; some even come with fireplaces (you can't bring your own fire, sorry). Many have views of the Falls, and leather sofas from which to enjoy them. Every guest is served a lavish breakfast in bed, and luxuries include a spa with a couples suite (warm-chocolate drizzle, darling?) and there's a fantastic farm-to-table restaurant downstairs. It's everything you'd want, all in one nice little spot. 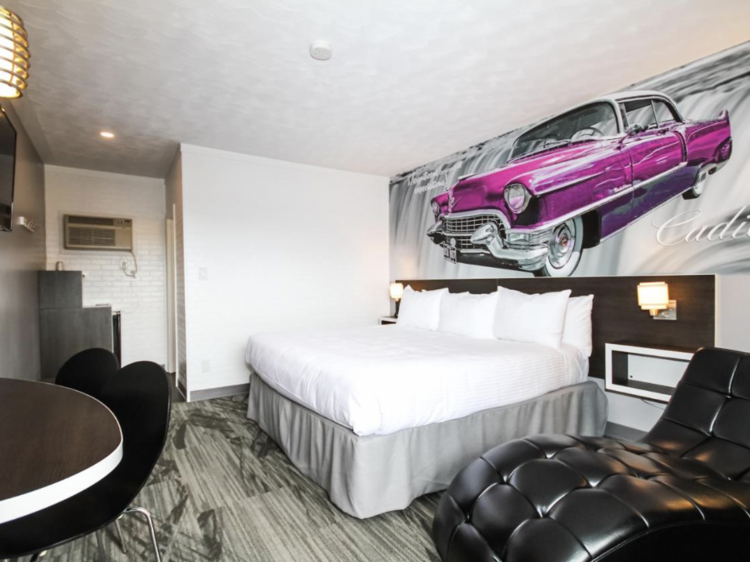 From the outside, the Cadillac is your typical small-town indy motel, with a single story of small rooms ranging around an off-street plaza (free parking!). The fab crown-shaped sign, then the neat turquoise paint job, are the first signs that something is different (and also the most cinematic you'll feel despite being minutes from Niagara Falls because you don't see it on the big screen all that often really do you). Inside, the rooms are humble but pin-clean, paint-smart, and well-specced, with fridge, microwave, and air-con, plus a huge Caddy mural. No facilities beyond coffee and muffins in the morning, but prices are good and the location is pretty central. Balance the saving with being able to explore local haunts! Oh, and did we mention free parking? Because here, the parking is free! Enjoy. 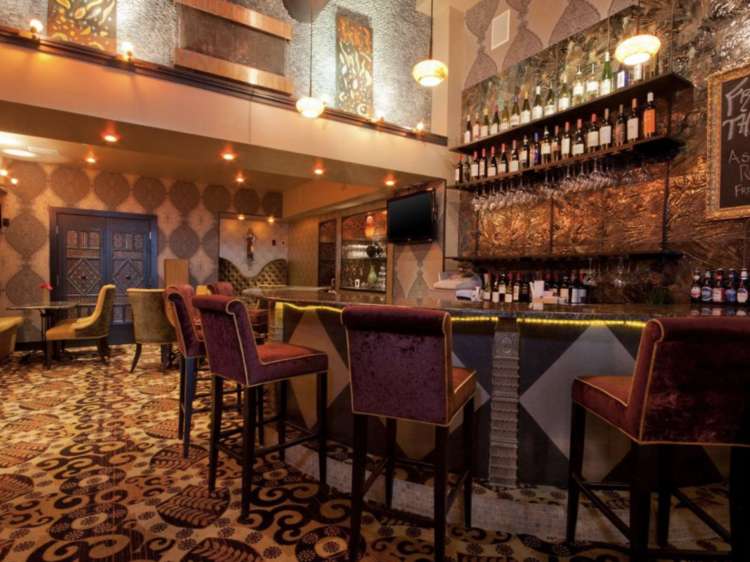 A glorious counterblast to Niagara’s dull chain-hotel conventions, this Art Deco original trumpets its individuality through the peacock-swagger decor and glamorous extravagance. Its bar/lounge has the cachet and cocktails of a private members’ club, and its extra touches are a riot of indulgence (decadent chocolates, cookies at turndown, Italian linens). Rooms are spacious and kitted out in luxurious fabrics, some with fireplaces and spa baths (plus all the necessities). Their views are limited (it’s not dead-center), but there’s a public gallery on the 19th floor from which you can see everything anyway. A hot and continental breakfast is included too. And also, Falls view aside, the view of the building from the front is frankly worth planning to visit even if you don't step indoors (though you should, because it's great). 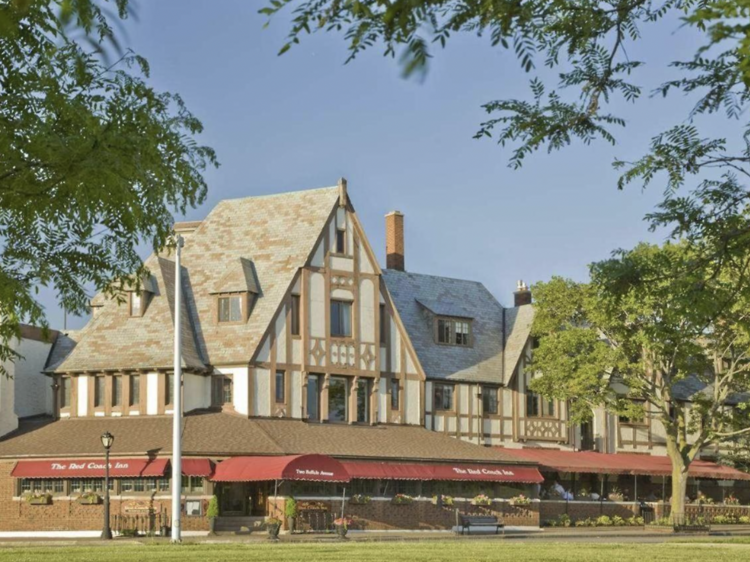 With so many identikit high-rises around, this historic inn by the rapids on the US side contributes some welcome character. It’s not even riotously expensive, given the luxury extras it offers, such as spa baths, treats in the fridge, and Bose radios. Room/suite style is country-house meets baronial – think canopy beds, florals, and wide fireplaces – and the dining room is timbered and chandeliered. If the mock-Tudor exterior is appealingly old-fashioned, the Tesla charging points are thoroughly 2010s but hey, saving the planet will probably be in fashion for a while, not least for natural beauties like the Falls. Don't want those drying up, do we?

Want to make the most of your trip? 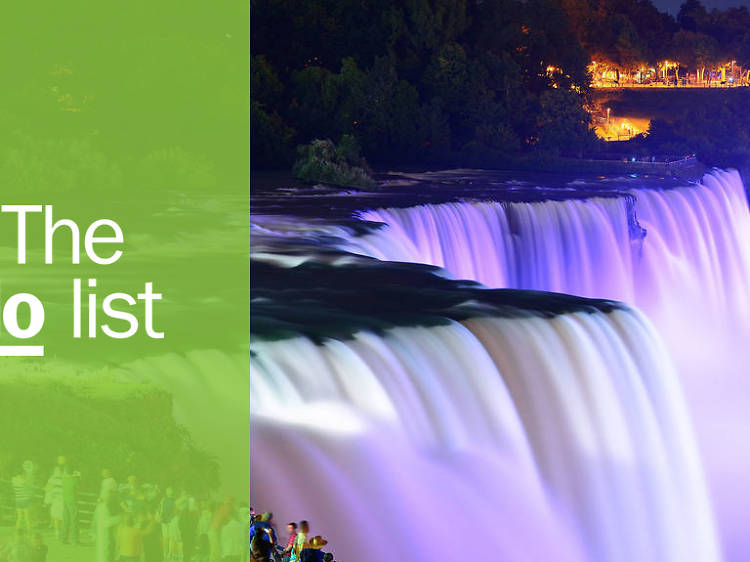 The 13 best things to do in Niagara Falls

Whether you want to explore the Falls on foot or by boot, gamble at the casinos or get a taste of the farm-to-table restaurant scene, it's all here and more in our list of the best things to do in Niagara Falls.