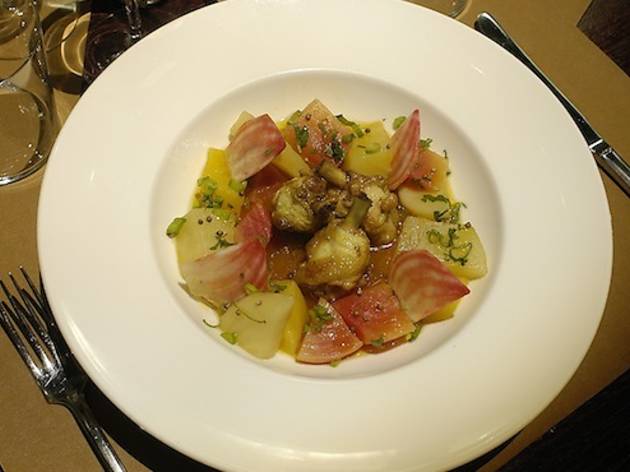 1/6
There are plenty of good popular restaurants around Ile de la Cit&eacute; and Notre-Dame. Click on the arrow above to start exploring some of our favourites. Think we've missed a great restaurant near Notre-Dame? Let us know in the comment box below. &nbsp; 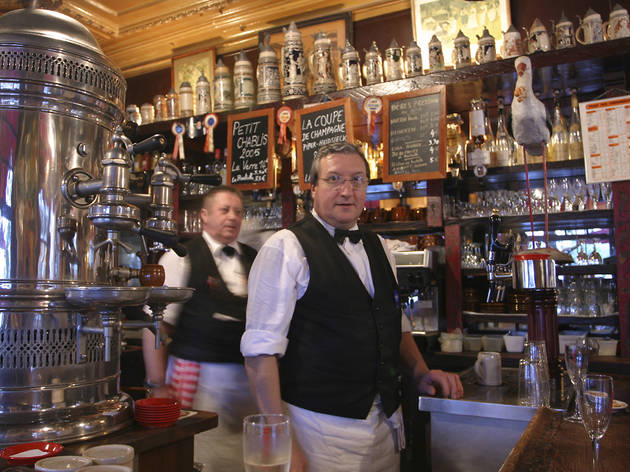 2/6
Happily, this old-fashioned brasserie soldiers on while exotic juice bars on the Ile St-Louis come and go. The terrace has one of the best summer views in Paris and is invariably packed; the dining room exudes shabby chic. Nicotined walls make for an authentic Paris mood, though nothing here is gastronomically gripping: a well-dressed fris&eacute;e aux lardons and a more successful pan of warming tripes. For more info, please click here. 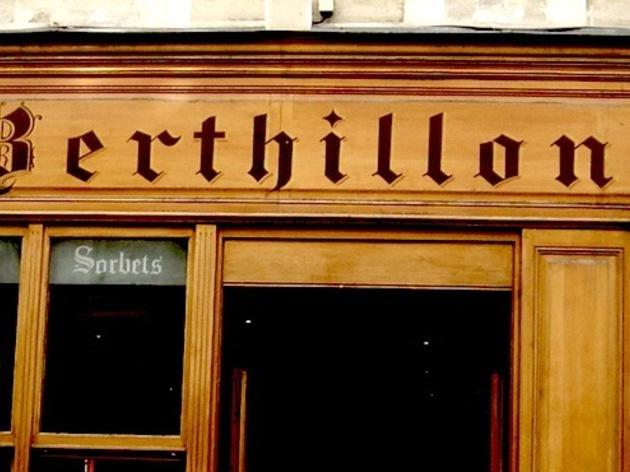 3/6
You can recognize the Berthillon ice-cream parlour and tearoom from the queues of people outside, except (somewhat strangely) in summer when the shop is closed! The flavours change throughout the seasons, but if it&rsquo;s available don&rsquo;t miss the strawberry sorbet, or the bitter chocolate sorbet made without and dairy products. In winter Berthillon offers delicious hot chocolate, made from melted chocolate and cream, and &ndash; perhaps even naughtier &ndash; a chocolate &lsquo;affogato&rsquo; (a ball of vanilla ice-cream, served in a white porcelain mug with hot chocolate poured on top and topped with praline cream). Don't be put off by the queues &ndash; they're rarely for the tearoom itself. For more info, click here. 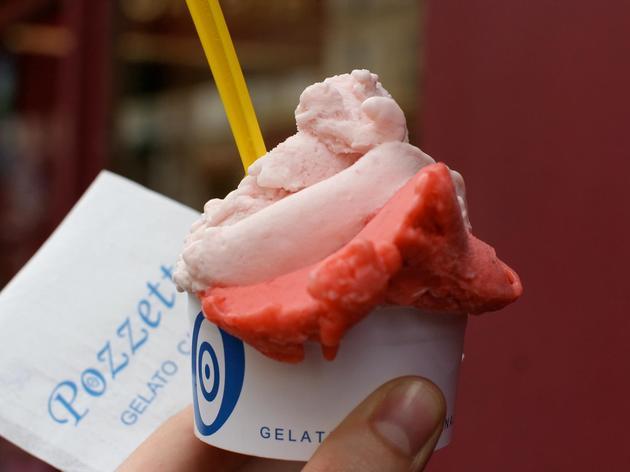 4/6
Pozetto might not be the most famous gelateria in Paris, but it&rsquo;s one of the best, serving classic Italian flavours like gianduia torinese (a Turin speciality of chocolate and hazelnuts from Pi&eacute;mont), fior di latte (made from milk, cream and sugar) and pistacchio (a creamy Sicilian pistachio blend). Fruit lovers are in for a treat too with peach, berry, pear and orange sorbets all made from real fruit. Order your scoop through the little window overlooking Rue du Roi Sicile (&euro;4) and eat it on the go, or sit down on a bench at nearby Place Baudoyer. If you do decide to eat in, the same ice cream costs &euro;7.For more info, click here. &nbsp; 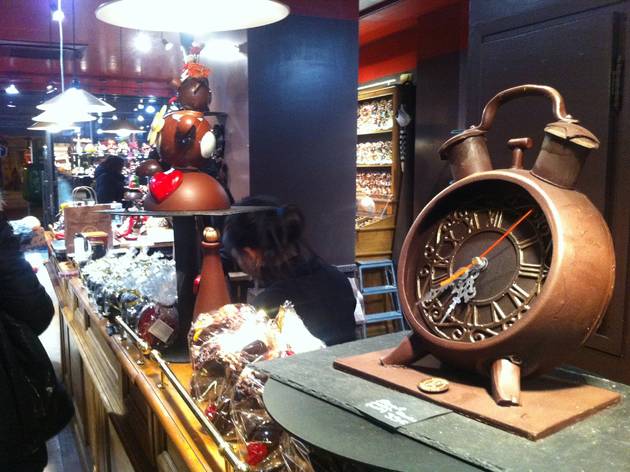 5/6
ABChocolate takes on unexpected forms at Maison Georges Larnicol, a chocolatier on rue de Rivoli, specialised in chocolate sculptures (from &euro;29). You&rsquo;ll find everything from red stiletto shoes and giant ladybirds, to pianos and even clocks fitted with real timepieces &ndash; all edible of course (except for the clocks' mechanisms!). If you can&rsquo;t afford a sculpture, fill up on &lsquo;rochers&rsquo; (almonds and orange peel rolled in dark chocolate), chocolate-coated marshmallows, biscuits and delicious macaroons.For more info, click here. &nbsp;

6/6
Antoine Westermann from the Buerehiesel in Strasbourg has created a true foodie destination here. Starters such as tartare of finely diced raw vegetables with saut&eacute;ed baby squid on top impress with their deft seasoning. Typical of the mains is a cast-iron casserole of roast duck with caramelised turnips and couscous. Even the classic room has been successfully refreshed with black beams, white Perspex panels and a long table d'h&ocirc;te down one side. For more info, please click here. &nbsp;
Advertising 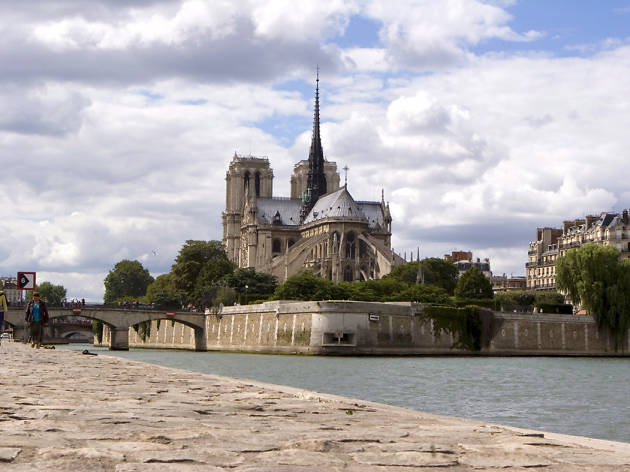 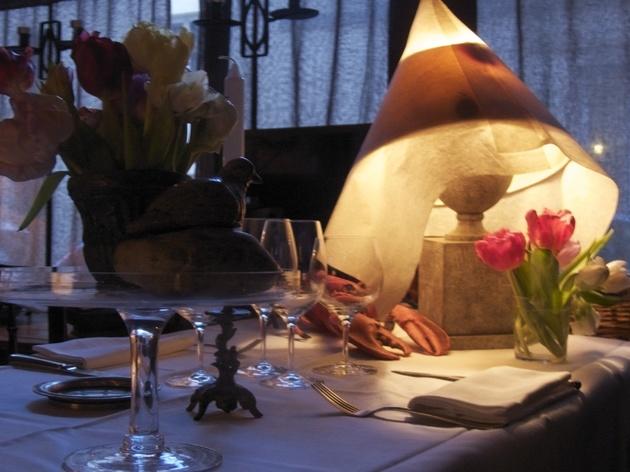 For some "oh la la" on (and off) the plate... Whether you want to impress, re-light the fire, or simply treat your heart's desire to a meal somewhere intimate, this pick or five romantic restaurants should have you lip-locked by dessert... Taillevent Taillevent’s first room, with its round, evenly spread tables, is gorgeous, but it lacks the intimacy required for a seductive tête-à-tête. We prefer the second dining room, which makes you feel like you’re in a secret club. La Tour d'Argent The views from La Tour d’Argent over Notre-Dame and Montmartre wow your eyes, while the food woos your stomach. This year, patissier Guillaume Caron has created a special Valentine’s dessert, “Mon ange chocolat-passion” (my chocolate passion angel). Delicieux! Restaurant Le Meurice In a sumptuous dining room, inspired by the Château de Versailles and reworked by Philippe Starck, you’re in for a sophisticated meal. Yannick Alléno’s subtle, refined cuisine is utterly inspiring and the setting is enough to make anyone go starry-eyed. Le Moulin de la Galette The Moulin de la Galette is set in one of two remaining windmills in Montmartre - both of which were immortalised by Renoir. After a meal signed chef Antoine Heerah (known for his fresh, minimalist cooking), take a stroll around the Butte’s romantic cobbled lanes. Angelina Angelina tea-room has two ways of inspiring love: A Mont Blanc meringue with chestnut cream and the most velvetine and naughty hot chocolate in Paris. 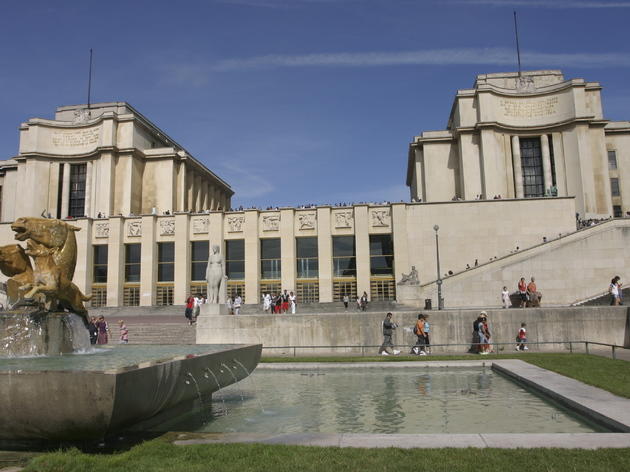 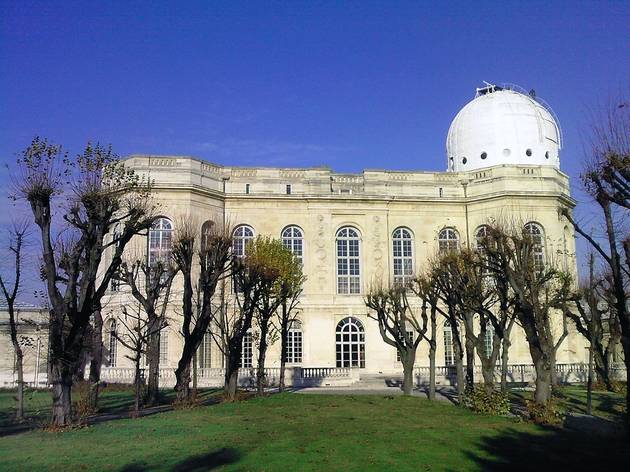 Everyone knows what the Eiffel Tower and Notre-Dame look like, but have you seen the classics that hide beyond the city's traditional tourist circuits? Try some of these... Cimetière du Père-Lachaise Père-Lachaise is the celebrity cemetery - it has almost anyone French, talented and dead that you care to mention. Not even French, for that matter. Creed and nationality have never prevented entry: you just had to have lived or died in Paris or have an allotted space in a family tomb. Sainte-Chapelle Devout King Louis IX (St Louis, 1226-70) had a hobby of accumulating holy relics. In the 1240s, he bought what was advertised as the Crown of Thorns, and ordered Pierre de Montreuil to design a shrine. The result was Sainte-Chapelle. With 15m (49ft) windows, the upper level appears to consist almost entirely of stained glass. The windows depict hundreds of scenes from the Old and New Testaments, culminating with the Apocalypse in the rose window. Palais de Chaillot This immense pseudo-classical building was constructed by Azéma, Boileau and Carlu for the 1937 international exhibition, with giant sculptures of Apollo by Henri Bouchard, and inscriptions by Paul Valéry. The Palais houses the Musée National de la Marine and the Musée de l'Homme (closed for renovation until 2012). In the east wing are the Théâtre National de Chaillot and the Cité de l'Architecture et du Patrimoine. Tour St-Jacques Loved by the Surrealists, this solitary Flamboyant Gothic belltower with its leering gargoyles is all that remains of St-Jacques-La-Boucherie church, built for the powerful Butchers' Guild in 1508-22. The statue of Blaise Pascal at the base commemorates his experiments on atmospheric pressure, carried out here in the 17th century. A weather station now crowns the 52m (171ft) tower. La Conciergerie The Conciergerie looks every inch medieval. However, much of the façade was added in the 1850s, long after Marie-Antoinette, Danton and Robespierre were imprisoned here during the Revolution. The 13th-century Bonbec tower, the 14th-century César and Argent towers, and the Tour de l'Horloge all survive from the Capetian palace.The visit takes you through the Salle des Gardes and the Salle des Gens d'Armes, an impressive vaulted Gothic hall built between 1301 and 1315 for Philippe 'le Bel'. Petit Palais Despite it’s elegant, Belle Époque allure the ‘Little Palace’ is overshadowed by its big brother, Le Grand Palais, just across the road. But ignore it and you’ll miss out on one of Paris’s loveliest fine arts museums, with an extensive mish-mash of works by Poussin, Doré, Courbet and the impressionists, as well as other paintings and sculptures from the Antiquity to 1900. The building, built by Charles Girault for the 1900 for the World Fair, is lit entirely by natural light and sits around a pretty little garden - a plum spot for coffee and cakes. Place des Vosges Paris's first planned square was commissioned in 1605 by Henri IV and inaugurated by his son Louis XIII in 1612. With harmonious red-brick and stone arcaded façades and steeply pitched slate roofs, it differs from the later pomp of the Bourbons. Laid out symmetrically with carriageways through Pavillon de la Reine on the north side and Pavillon du Roi on the south, the other lots were sold off as concessions to officials and nobles (some façades are imitation brick). It was called place Royale prior to the Napoleonic Wars, when the Vosges was the first region to pay its war taxes. 104 (Centquatre) 104, described as a 'space for artistic creation', occupies a vast 19th-century building on the rue d'Aubervilliers that used to house Paris's municipal undertakers. The site was saved from developers by Roger Madec, the mayor of the 19th, who's made its renovation the centrepiece of a massive project of cultural and urban renewal.There aren't any constraints on the kind of work the resident artists do: 104 is open to 'all the arts', but finished pieces have to shown in one of 104's annual 'festivals'. La Grande Mosquée de Paris Some distance removed from the Arabic-speaking inner-city enclaves of Barbès and Belleville, this vast Hispano-Moorish construct is nevertheless the spiritual heart of France's Algerian-dominated Muslim population. Built from 1922 to 1926 with elements inspired by the Alhambra and the Bou Inania Medersa in Fès, the Paris mosque is dominated by a stunning green-and-white tiled square minaret. On la rue Geoffroy-St-Hilaire, La Mosquée café (open 9am-midnight daily) is delightful - a modest courtyard with blue-and-white mosaic-topped tables shaded beneath green foliage. Observatoire de Paris The Paris observatory was founded by Louis XIV's finance minister, Colbert, in 1667; it was designed by Claude Perrault (who also worked on the Louvre), with labs and an observation tower. The French meridian line drawn by François Arago in 1806 (which was used here before the Greenwich meridian was adopted as standard) runs north-south through the centre of the building. You'll need to apply for an appointment at the Observatoire by letter, but it's also worth checking the website for openings linked to astronomical happenings - or visit on the Journées du Patrimoine.