Young, eminent and widely travelled, Lithuanian-born artist Ernest Zacharevic has left his mark in myriad cities throughout the globe. When a pit stop in Penang turned into a four-year stint, Zacharevic’s interactive and engaging murals breathed new life into George Town.

You’re all over the place. Where exactly do you live?
You started with the most difficult question.

Resident of the world?
Yeah, I live everywhere. Last year, I realised it was the first time in five years that I’d spent more than three months in one country.

What’s your hometown like? I read that Lithuania’s population is three million compared to Malaysia’s 30 million. That’s a ratio of 1:10.
Basically. Nine out of twelve months it’s super cold and depressing there.

Is that why you wanted to move to a tropical country?
I like it here. It’s where I come back most often. I still consider myself based here.

What drew you to Malaysia?
When I was studying in London, I would travel every chance I had. I spent some time in Southeast Asia and visited Malaysia. I quite liked it. In college, I became good friends with someone from Penang. One Chinese New Year, I stopped by to see her and to hang out for a bit. Before I knew it, four years had gone by.

'Penang is a great place for art, because you have all these hungry people waiting for opportunities

Since you mentioned London... You've often been compared to a fellow Englishman, namely Banksy. But while he enjoys a certain degree of anonymity, everyone knows who you are. Doesn’t that make you a little antsy?
It does a little, but it’s the nature of my work. I don’t see the need to be anonymous. I like the social aspect of art, of being engaged and involved. Personally, it’s not only artwork that draws me and encourages me; it’s connecting and meeting people and trying new things and exploring outside my own box. Besides, it’s very hard to stay anonymous given the way that I work. Sometimes, I try to limit my exposure, but my work takes time to build and I can spend up to a week in one spot. All you can do is to go straight ahead, talk to people and be open about it. What Banksy does is anti-establishment. I talk to people, the police and authorities. It serves another cause not being anonymous, not being afraid to say ‘This is what I do, so sue me.’ 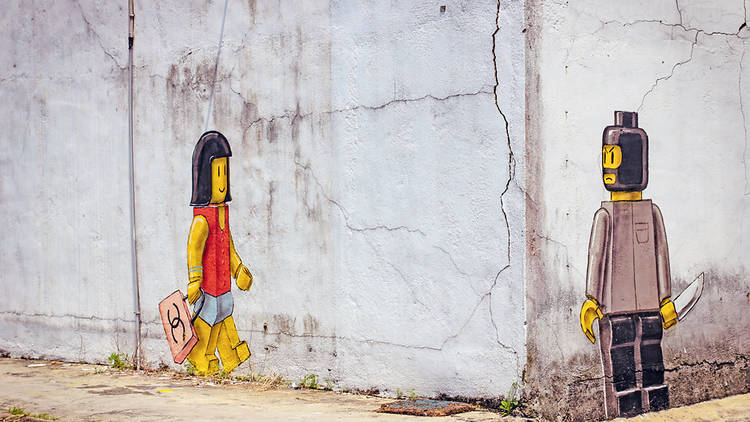 Well, there was that incident in Johor Bahru… [In November 2013, Zacharevic created a contentious mural addressing the country’s rising levels of crime. It became the catalyst for widespread discussion of mugging, but also reeled in complaints against the negligence of local authorities. In little under a week, the mural was painted over.]
[Laughs]

It’s good that you’re able to laugh about it.
I can laugh about it because it didn’t affect me much. I watched it all as a spectacle. I was a viewer just like everyone else. I had a lot of calls from the media in the beginning and said two or three sentences over the phone from overseas. When I came back a week later, I saw people with T-shirts emblazoned with my quotes. I decided not to give another interview because things were getting out of hand. So I just sat there and watched. It wasn’t much trouble. 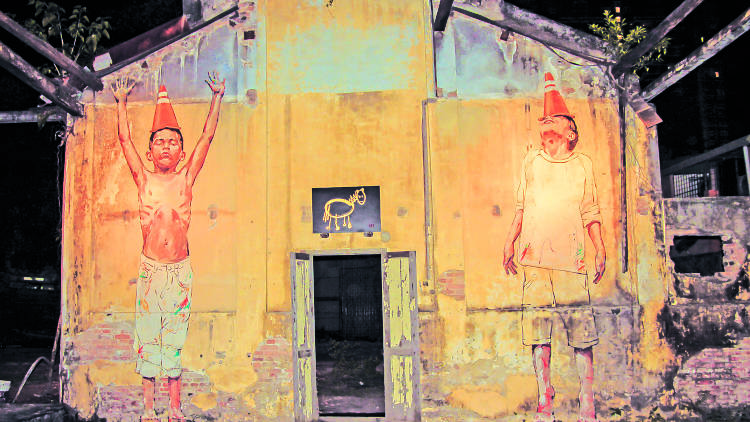 Does your family fret about you taking a risk with street art?
Yeah, they do. If I don’t check in with my mum on Sunday evenings, she’ll start Google-ing me. This is directly in response to the JB thing, when I went offline for a while. Otherwise, my parents have always been very supportive of whatever I do.

Do you feel a pang of hurt when your work is removed or painted over?
No. If you’re not ready for it, you don’t go out and put your art on a building that’s been burnt down.

Street art aside, you’re also involved with some local art galleries, including your space in Eastern & Oriental Hotel. It’s where I first saw your works on canvas.
That’s why I opened the place. The gallery has been a little hub where I throw my artwork that I don’t show anywhere else – my studio stuff and everyday practice. It’s an exciting time because we’re expanding. It’s an artist-run gallery that involves friends, people I meet, and artists whom I admire.

Hin Bus Depot Art Centre, the venue of your first solo show, is a great gallery too. Are you still heavily involved?
I’m still involved, but not as much. We’ve set up a management team and it’s running by itself. Penang is a great place for art, because you have all these hungry people waiting for opportunities. They take chances, they take risks, and they have ambition and time rather than working nine-to-five and spending so much time stuck in traffic.

Like in KL?
Yes. Penang looks super quiet at first glance, as if nothing happens here. But the moment you start doing something, people are willing to get involved and to help you. It’s quite unbelievable. That’s how things like Hin Bus happened. Like I said, the art centre is now self-sustainable. It feels great to be a part of something like that.

For more on Ernest Zacharevic, www.facebook.com/Ernestzachas.