The Welsh poet William Henry Davies began his 1911 poem ‘Leisure’ with a poignant couplet: ‘What is this life if, full of care, We have no time to stand and stare?’

So if you ever find yourself on the trails of the Penang National Park, don’t forget to look up and perhaps stand and stare, if only for a few minutes. The majestic trees – Chengal, Meranti Seraya, Merpauh – have stood here since before the industrial revolution, seen two world wars and lived through the decline of the British empire.

It would be a pity if you did not pause to admire these quiet giants watching over their ancient kingdom as you navigate the trails in this beautiful rainforest. Here, time is not measured in human terms: These trees are only fully mature when they are a halfcentury old or more, and their lifespans may extend to hundreds of years.

With a total area of about 25 square kilometres, the Penang National Park is the smallest national park in the world. But within its boundaries, protected as a forest reserve under the 1980 National Parks Act and gazetted as a national park in 2003, this area is home to an extraordinarily wide spectrum of tropical plants, animals, and geographical features.

Here you will find lowland mangrove swamps that fringe the rocky shoreline and the ancient dipterocarp forests, named for the families of tropical hardwood trees prized for their timber and resin. Once, buffaloes dragged massive logs along the forest trails, and the deep furrows they carved into the ground can still be seen alongside some trails today. Logging was carried out in this area until 1962, but about 80 hectares of virgin rainforest remain untouched in an area now known as the Pantai Acheh Forest Reserve. 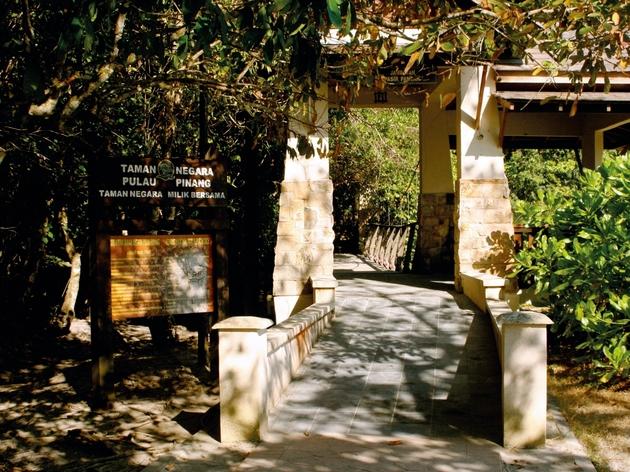 At the expanses of sandy beaches that flank the park along its coastline – Pantai Kerachut, Teluk Duyung, Teluk Tukun, Tanjung Aling, Teluk Ketapang, Teluk Kampi, Pantai Mas – the lucky visitor may also spot wild dolphins or otters at play in the sea.

It is reasonably easy to get to this park, located on the north-western corner of Penang island: a 45-minute drive will transport you from the hubbub of traffic and the urban activity of George Town to this scenic natural haven. The modern, wellkept entrance to the park, which also features an information centre, belies the natural wonders within it. The trails that lead into the jungle begin easily enough, with a paved half-kilometre-long path that meanders gently along the coastline.

At the end of the paved path, a little suspension bridge signals the start of the two main trails that will take the visitor into the park proper, whether through winding trails deep into the heart of the green jungle towards Pantai Kerachut, or along the wavelapped shore towards Muka Head. At this point, the paved and landscaped path ends, and narrow dirt trails start. 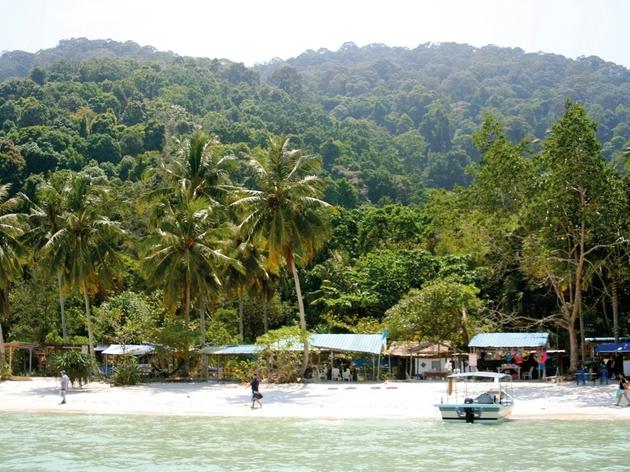 The right turn: Teluk Aling, Monkey Beach and Muka Head Lighthouse Trail
If you turn right after the bridge, the path snakes along the northern shoreline towards Pantai Teluk Aling, Teluk Duyung and, at the north-western tip of the island, about two hours’ hike away, a nineteenth-century lighthouse at Muka Head.The first beach you come to along this trail is Pantai Teluk Aling, where the Centre for Marine and Coastal Studies (CEMACS), under the aegis of Universiti Sains Malaysia (Malaysian Science University), manages a turtle sanctuary and hatchery. The centre was established in 1991 as a permanent base for marine research.

Traverse this beach and come to the jungle again. Here, the path heads inland and gets narrow and a bit challenging, with the occasional boulder or fallen tree to vault over. This path takes you further along the coastline towards Teluk Duyung, popularly known as Monkey Beach for the troops of omnivorous long-tailed macaques that sometimes swarm the beach and shamelessly raid hapless beachgoers’ picnics.

Monkey Beach is a kilometre-long stretch of coconut-tree lined beach that is a popular daytrip destination for local and foreign tourists. This remote beach, nestled in a picturesque bay and fringed by dense rainforest, is not accessible by any other means except for the trail from the park entrance, or by sea. Most tourists are ferried here by the boatload after a ten-minute ride from the Teluk Bahang jetty, or from the Batu Feringghi resort hotels, so the beach can get crowded on weekends and holidays.

Walk to the far end of Monkey Beach, and the trail leads inland again towards the lighthouse at Muka Head. Almost immediately the trail starts to ascend, and will continue to rise until it reaches the top of the promontory, at an elevation of 242 metres.

The trail to the lighthouse is about 1.2 kilometres long, and can be steep – it takes a hard 30-minute climb to reach the top. It is mostly a well-marked path with steps cut into the earth, laid with stone slabs or with rocks providing a natural stairway in the dappled sunlight. Don’t let its fairly vertiginous nature daunt you; this is an enchantingly lovely, sylvan trail.

In a remarkable feat of engineering, the squat, 14-metre-tall Muka Head Lighthouse was built by British engineers in 1883. The lighthouse guided early steamships to safe harbour in Penang port, and is still operational today. Visitors can climb the short flight of spiral steps to the top.

Just under the lantern room, a sturdy wooden door leads to an outside gallery deck. Here, the fresh sea breeze quickly dries a sweaty brow, and the spectacular view of the Straits of Malacca and the pristine north western coastline of Penang make the strenuous uphill trek highly worthwhile.

This is also where the path ends, so head back downhill towards Monkey Beach. If you don’t fancy another hour and a half’s trek back to the entrance of the park, ask at one of the refreshment kiosks dotted along the beach – they will help arrange a boat ride to the Teluk Bahang jetty, where the park entrance is. Hiring a boat costs around RM40.
Advertising 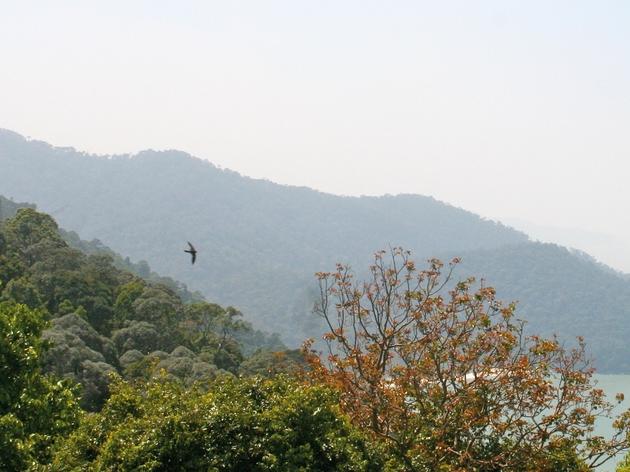 The left turn: Pantai Kerachut and Meromictic Lake Trail
Back at the sign-posted start of the trail near the park entrance, the left turn will lead you into the lush green jungle, heading west towards Pantai Kerachut. It takes about one and a half hours’ hike through the jungle to reach the relatively quiet beach.

Along the way, the trail undulates for approximately two kilometres under the shady canopy of the soaring dipterocarps with their straight trunks and, high above, their lofty crowns. You are in ancient rainforest now, and here is where you will see the tall trees, with their lyrical Malay names – Petai, Jelutong, Bintangor.

Most have slender trunks reaching skyward in ceaseless competition for sunlight, but there are also old giants here. It is hard to tell the age of tropical trees – they do not have the seasonal growth rings of temperate forest trees – but some of them, with their great mottled trunks and buttressed roots, have been estimated to be more than a thousand years old.

The network of dirt trails that traverse the park are well marked, but can be challenging and, at times, strenuous even for a reasonably fit person. Some stretches can be steep and even slippery if it has been raining. Along the way, however, the intrepid visitor is rewarded by nature in all its threedimensional, surround-sound beauty.

Here – solid grey counterpoints to the airy grace of the tall trees – mammoth granite boulders lie where they probably fell at the paroxysms of the earth’s creation, and now hulk over limpid forest streams. In this timeless, tranquil realm, insect species that predate the dinosaurs sing their primordial song in the cool vegetation. Save for the cleared trails, much of this place has existed, unchanged, for millions of years.

Then, at the end of the trail, the path opens out to an expanse of water, or a muddy plain, depending on the time of year it is visited. This is the rare meromictic lake, one of fewer than 20 such lakes in the world.

Unlike the Black Sea, another true meromictic basin, this unusual, nearly threesquare- kilometre area is a dry plain during much of the year. During the monsoon season – from April to May and from October to November – winds and tides cause seawater and freshwater from five small creeks that flow into the lake bed to flood it.

The different densities of fresh and salt water do not intermix and remain in distinct layers – fresh water lies suspended over the salt water. The Pantai Kerachut trail skirts around the perimeter of the lake, and a small suspension bridge straddling the mouth of the river is a good spot for a photo-op view of it.

From Pantai Kerachut, you can hike through steep jungle paths to access the more remote areas of the park – the usuallydeserted beaches of Teluk Kampi and Pantai Mas to the south, or Teluk Ketapang to the north.

Or, if you are feeling adventurous: From the highest point of the Pantai Kerachut trail, about midway, there is a newly-opened steep uphill trail to the highest point in the park – Batu Hitam, 450 metres above sea level.

The trails are well marked, with shelters along the way for rest stops. It would be really hard to get lost here, but if you do, the good news is that this is the smallest national park in the world, so it would be quite difficult to get into too much trouble – you are never more than a few kilometres from the main park entrance.

Between the Muka Head and Pantai Kerachut trails, there is a connecting trail that will bring you to the Canopy Walkway, a narrow, 250-metre-long suspension bridge almost hidden 15 metres up in the trees. A RM5 ticket, available at the park entrance, is required for access to the walkway.

From the canopy walkway, a reasonably easy, less than one kilometre hike along the shoreline takes you to the start of the paved path that leads back to the park entrance.

Good things come in small packages, as the cliché goes. This holds so true for this little national park, tucked away like a precious jewel in a small corner of Penang Island. This is indeed a good place to stand and stare, if only for a little while. 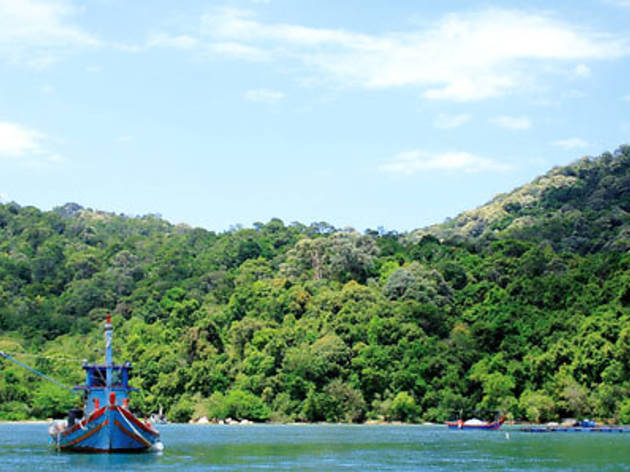 Admission is free, but visitors are required to sign a register at the park entrance counter. Buy a ticket for the Canopy Walkway, RM5, here if you plan to visit it.

Getting there
By car or taxi: The park is located 45 minutes’ drive from George Town. Private car parking at RM3 a day is available adjacent to the National Park entrance.

By bus: Rapid Penang bus service No. 101 takes you from George Town to Teluk Bahang, and from the bus stop it is a short walk to the park entrance.

At the park
Counters at the entrance of the park provide boat services to take visitors from the Teluk Bahang jetty to Monkey Beach. Prices are approximately RM40–RM80 for a one-way trip, and between RM80–RM100 for a return trip. Private tours can also be arranged.

If you plan to hike in the park, bring plenty of water (at least one litre for every two hours), as there are no refreshment facilities anywhere in the park except at Monkey Beach. Sunblock, insect repellent and comfortable sneakers or hiking boots are recommended.