Top 10 things to do in Penang Island South 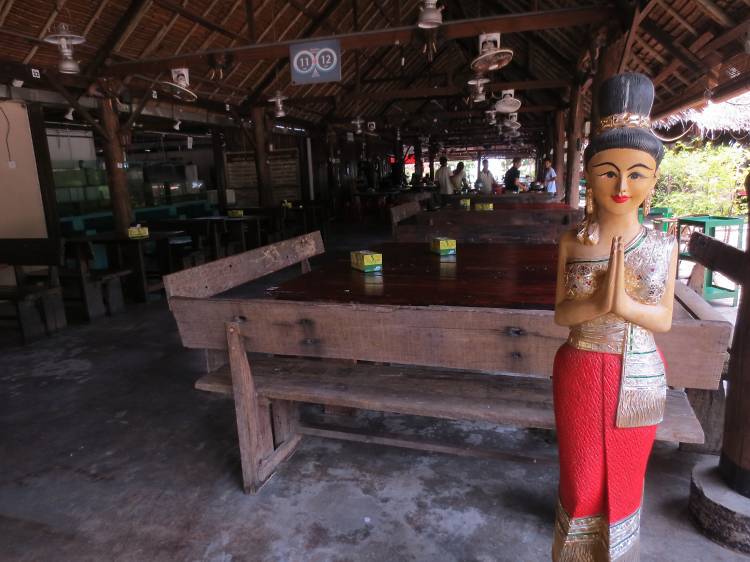 Located in the rural fishing village of Teluk Kumbar on Penang’s pristine south-central coastline, Khun Thai (or Simply Thai) Restaurant is one of the island’s hidden gems. Here, you can enjoy a wide array of Thai specialties right on the white sand beach with views of the sea. The open-air restaurant offers several different varieties of fresh seafood which are proudly displayed in large tanks; when ready to order, you can just point to which fish you’d like and specify how you’d like it prepared. Besides seafood, Khun Thai is also known for its fragrant, tenderly cooked pandan chicken, their perfectly spiced tom yam as well as their claypot glass noodles.
Read more 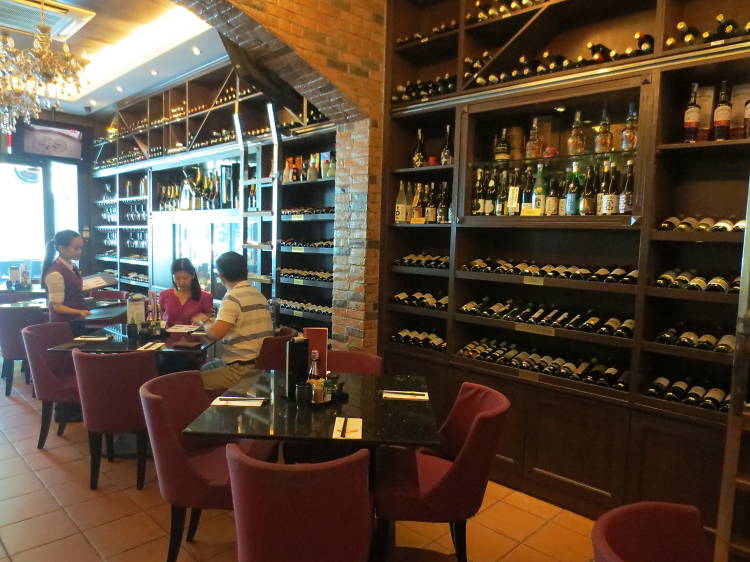 With its classy dimly lit interiors, its exceptional wine promotions and its attentive wait staff, Vino Vino Wine Bar in Bayan Lepas is one of the south island’s most exceptional fine dining establishments. The restaurant offers a huge variety of tasty fare cooked up by experienced chefs – who you can watch working behind a clear glass window separating the dining room from the kitchen – including daily selections of fresh sashimi, perfectly rolled sushi and piping hot bowls of soba noodle soup. Vino Vino specialises in yakitori, perfectly seasoned meats and vegetables delicately grilled on bamboo skewers over a charcoal grill. Their grilled chicken wings, pork-wrapped asparagus as well as the tenderly cooked lamb will keep you coming back for more.
Read more
Advertising 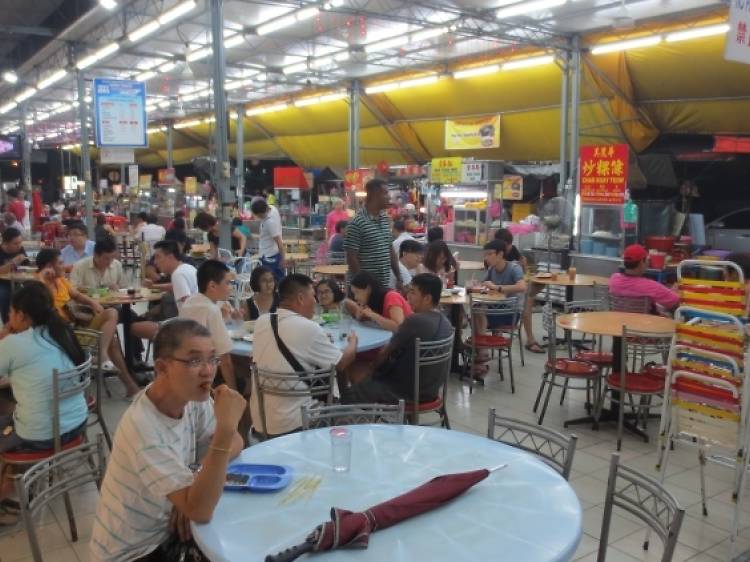 Super Tanker Hawker Food Court in Sungai Nibong offers locals and visitors of Penang a refreshing change of scenery from the island’s famous hawker food courts in the north. Its milieu reflects its lesser-known status: The pace here is laidback, as food sellers take a bit more time perfecting the pork garnishes on a plate of fried noodles or a dash of shallots on a rich bowl of laksa. The food itself is just as phenomenal as other stalls around the island, and cheaper by a ringgit or two. Specialties include the chee cheong fun, the lam mee and the stellar Aki Pancake: a crispy cake-like pancake filled with sweet or savory flavorings, including coconut, chocolate, cheese or egg.
Read more 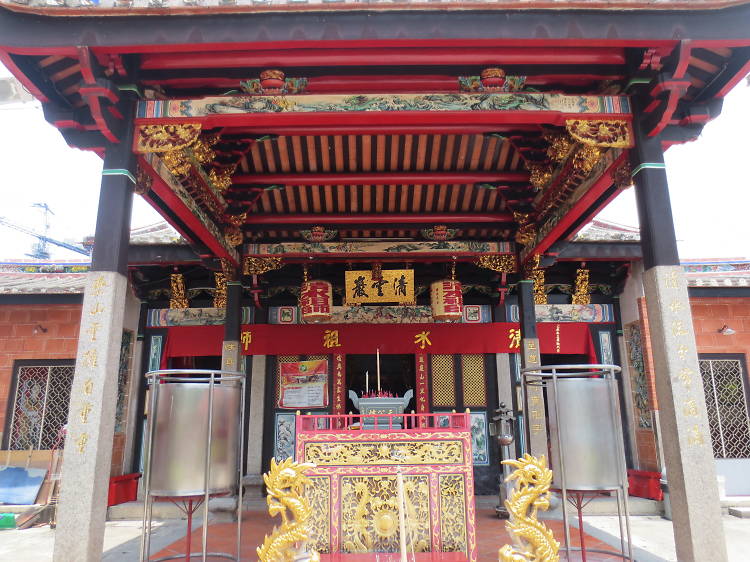 Penang’s Snake Temple in Bayan Lepas is rich with local folklore. The temple was built in 1850 in honor of a venerated Buddhist monk and healer known as Chor Soo Kong, recognised for his supernatural ability to bring rain to the various places he wandered, saving one city from a terrible drought. Legend has it that soon after the temple was erected, pit vipers began to take shelter in its various nooks and crannies. The temple’s founder, also a Buddhist monk, permitted them to stay. Nowadays, it is believed that the fragrant smells of incense burning around the temple renders the snakes harmless; don’t worry – the freely roaming pit vipers have had their venom removed just in case. Combined with the continually burning incense, the snakes, coiled in corners and around small trees set up within the premises, lend a devotional feel to this unique temple.
Read more
Advertising 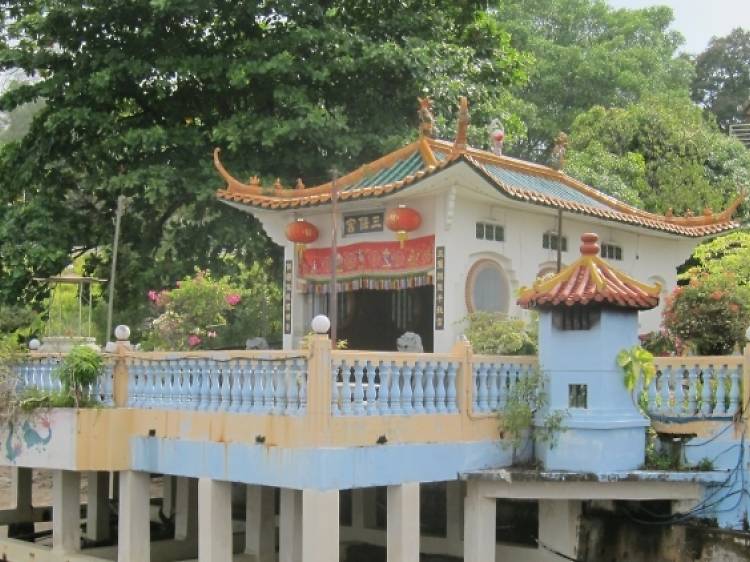 Near the southeastern tip of Penang, you will find the Sam Poh Footprint Temple, dedicated to a giant footprint set in stone whose origins remain mysterious. Chinese locals believe the footprint belongs to Captain Zheng He (whose local name is Sam Poh), a legendary fifteenth-century explorer whose fleet of ships sailed far and wide across the Indian Ocean and the South China Sea. Penang Indians, on the other hand, believe it was Hanuman, the Hindu monkey deity, who made the footprint when leaping over the Indian Ocean to save King Rama’s queen, Sita, as described in the Ramayana. Yet another story of the footprint is told by local Malays, who attribute the footprint to the terrible giant Gedembai, who once lived on the island hundreds of years ago. The temple itself may be unassuming, but the rich folklore surrounding its origins make this a special place to explore.
Read more 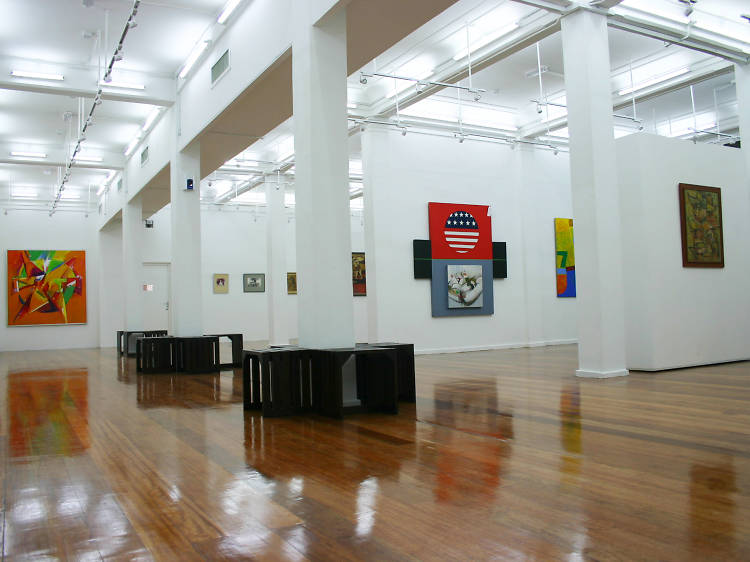 Located in a beautiful, centuries-old colonial mansion at the top of a hill on Universiti Sains Malaysia’s campus, the Tuanku Fauziah Museum and Gallery is one of the earliest university museums in Malaysia, and one of the most impressive collections of art and science in Penang. The gallery houses works from several of Malaysia’s great artists, including Latiff Mohidin and Chuah Thean Teng, as well as newer artists beginning to make waves in Malaysia’s creative scene, such as Sabri Idrus. Besides taking in the great artworks, you can explore the museum’s interactive exhibitions and programmes or its extensive collection of Islamic artefacts. Many of the temporary exhibitions, which feature works from artists all over the Asean region, are free to the public.
Read more
Advertising 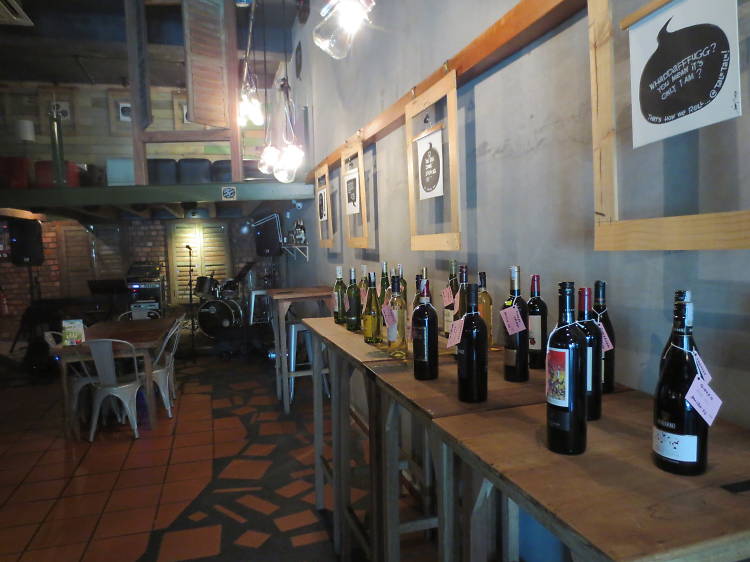 Talk Talk (or Tok Tok) Wine Bar is south Penang’s new hip bar and restaurant, sure to impress those looking for a late-night atmosphere with a chilled-out vibe. With comfy couches and lounge chairs set up among the dining tables, Talk Talk’s cozy atmosphere is perfect for relaxing over a glass of wine or a creative cocktail from their well-stocked bar. Often, live bands grace the small stage late at night, playing smooth jazz and the occasional original number. The restaurant offers a delicious, reasonably priced selection of Western comfort food, including pasta carbonara and tasty grilled salmon. Talk Talk also offers a standout dessert menu – their chocolate banana cake comes highly recommended. This cool bar is quickly becoming the place to see and be seen among Penang’s younger crowd. 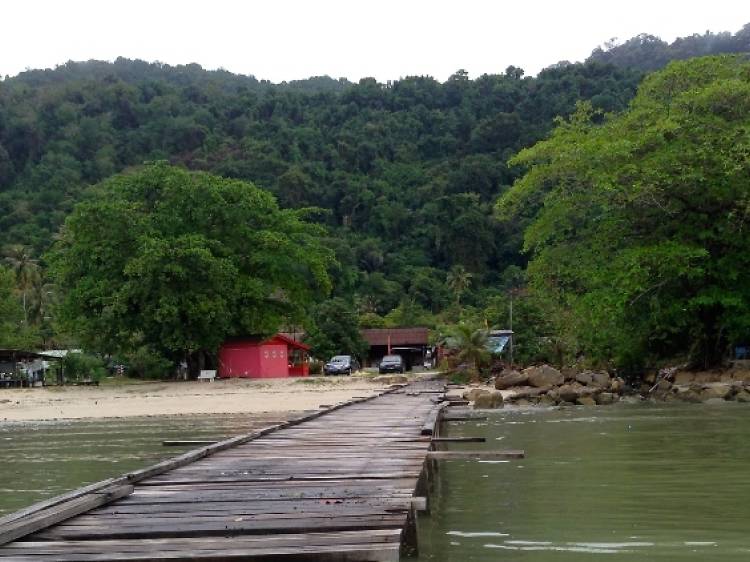 Located near the southwestern point of Penang island, Gertak Sanggul feels like a world away from the bustling northern coastline of George Town and Batu Ferringhi. You can experience life at a slower pace at this sleepy coastal kampung, watching from the white sand beach as fishermen pull up to the rickety piers with their daily catches ready to be sold to nearby roadside restaurants, and local residents rest peacefully on the beach enjoying the sounds of the waves breaking against the shore. The peaceful atmosphere and the clean air coming down from the rugged hills just beyond the village make this a great spot for a picnic at nearly any time of the day.
Read more
Advertising 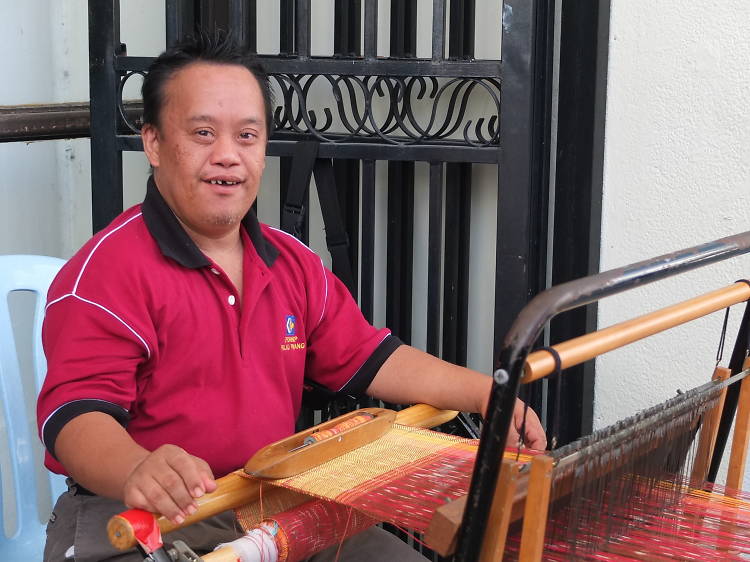 Stepping Stone Centre, a subsidiary of the non-profit organization Asia Community Service, is a small arts and crafts workshop and store employing Penangites living with disabilities who may not be able to find adequate employment elsewhere. All of the store’s items have been hand-crafted by these employees, including clothing, soaps, baked goods, pottery and printed batik. Proceeds go directly towards these in-need members of the community, making this a great place to pick up souvenirs or gifts. If you are looking for a more in-depth experience, Stepping Stone is always on the lookout for volunteers to help lend a hand and provide support.
Read more 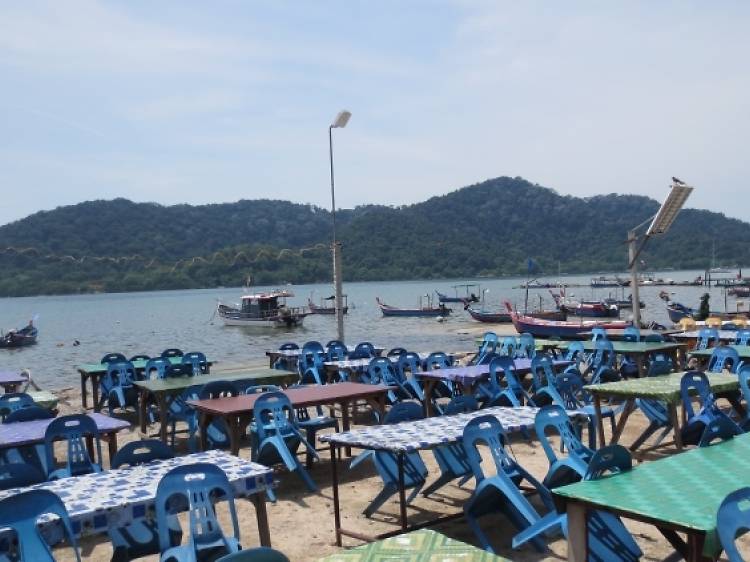 Situated on a little slice of coastline behind two giant condominiums in Bayan Lepas, Hammer Bay Restaurant is easy to miss if you’re not looking for it. However, it is hard not to notice the incredible smells of fried garlic and ginger wafting up with the ocean breeze towards the nearby street every evening. Here, you can enjoy a great view of the fishing boats parked near the shoreline while digging into the restaurant’s signature dish, ikan bakar: fish barbequed in a banana leaf, garnished with fresh herbs and lemon. This alfresco dining spot gets packed with locals during dinnertime, and it’s easy to see why – with glowing lights hung in the trees and around the tables, and Malay movies playing on a projector, the atmosphere is always cheerful.
Read more