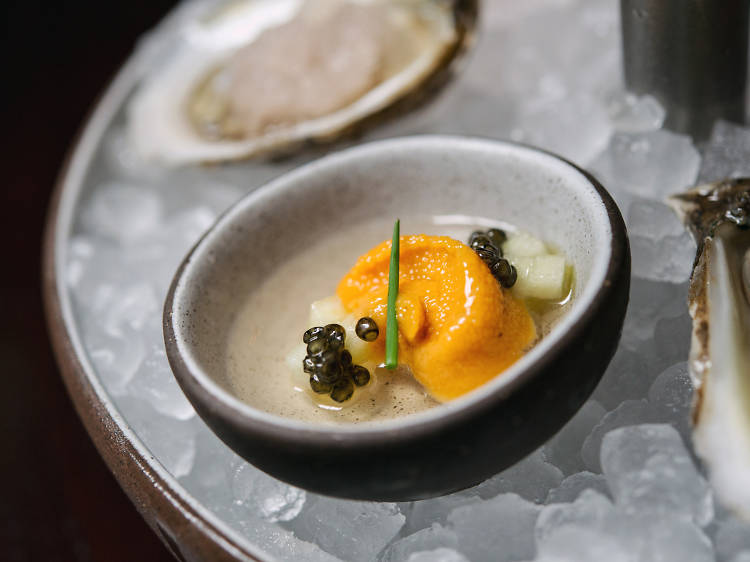 Chef Daniel Humm and William Guidara, the celebrated team behind Eleven Madison Park, turn the music up for their sophomore venture in the NoMad Hotel. Ditching EMP's tasting-menu-only format, Humm takes a more democratic approach with an à la carte menu of seasonal, French-inflected fare.  The venue comprises five distinct spaces, all designed by Parisian architect Jacques Garcia: a dark-oak-clad dining room with heavy fabrics and an open hearth; a sunlit atrium with a pyramidal glass roof; a cozy fireplace room; a library for afternoon tea and evening nightcaps; and a cocktail lounge featuring a stately mahogany bar. 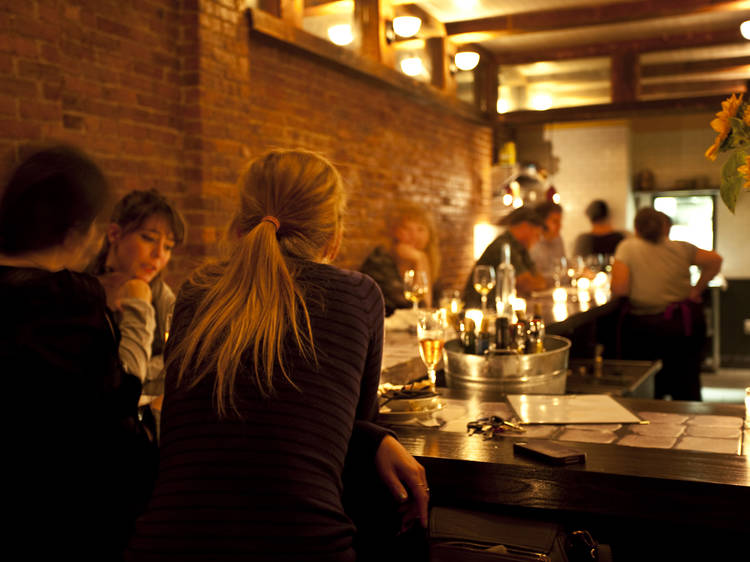 When porchetta queen Sara Jenkins set up her East Village trattoria Porsena, her ambitions were modest: to conjure a simple workaday pasta joint just like the ones she encountered during her enviable childhood in Rome and Tuscany. Her spin-off wine bar next door, more like a casual mom-and-pop enoteca than a cool-kid vino spot, shares this humble attitude and personal approach. At Porsena Extra Bar, there is no encyclopedia-thick wine list full of self-consciously obscure offerings with eye-popping price tags. The trim 27-bottle selection—a collection of Jenkins’s personal favorites—is just as easy on the eyes as it is on the wallet, with an approachable selection of five reds and five whites by the glass, and the majority of bottles clocking in the $40–$50 range. DRINK THIS: At this vino-focused annex, Jenkins has expanded on the Italian lineup at her flagship restaurant with a more diverse Mediterranean wine list. Lesser-known varietals from France and Spain dominate the menu, but Greece and Lebanon punctuate the offerings. On a recent visit, we were taken with a rich, acidic French white wine showcasing lip-smacking salinity—the 2011 Picpoul de Pinet from Château de Saint Martin de la Garrigue in Coteaux du Languedoc (glass $14, bottle $50). We were also intrigued with the offbeat 2010 Amazigh from Zniber Vineyards (glass $10, bottle $35), in Morocco’s northern region of Beni M’Tir, a spiced red blend with a pleasing barnyard whiff. GOOD FOR: A refuge from downtown’s high- 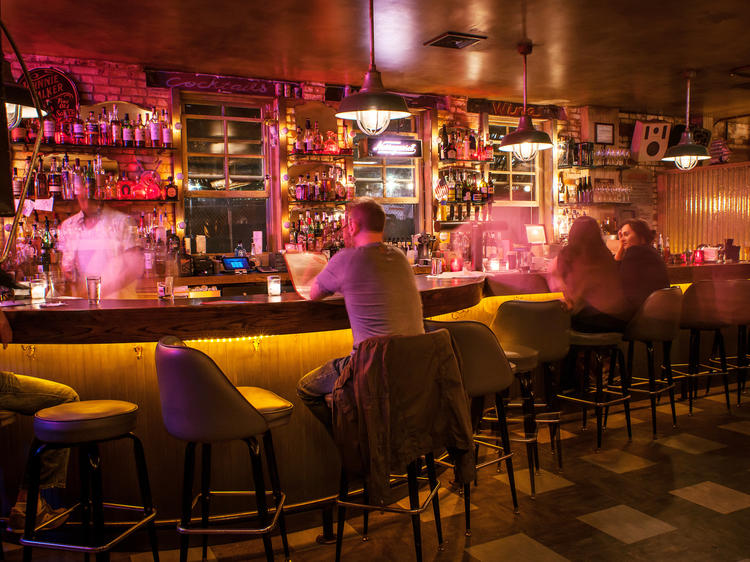 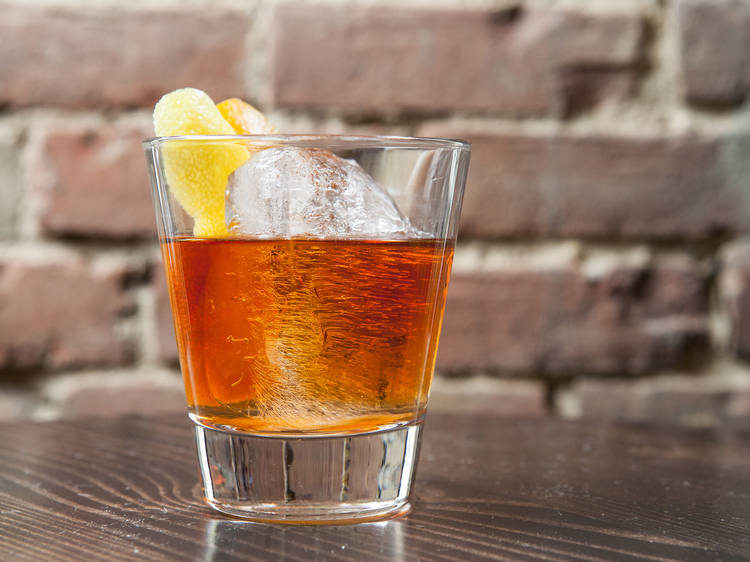 In an age when suspenders and ’staches are cocktail-bar clichés, it’s hard to remember that a bit more than a decade ago, craft cocktails were almost a historical footnote, degraded over the years by sugary premade mixes and the herculean rise of the Appletini. Times have changed: Many casual drinkers now know Angostura from Peychauds bitters, and bartenders are thought of as serious pros, not moonlighting actors. Arguably, no one has done more to advance the cause of a well-made drink than Sasha Petraske. In 2000, the visionary barman paved the way for the modern cocktail bar with Milk & Honey—a rarefied antidote to New York’s sloppy drinking scene, fueled at the time by Red Bull–vodkas and cheap beer. In short order, he and his acolytes have spread the liquid gospel with a rapidly expanding web of standout watering holes, including Little Branch and Silver Lining. Along the way, Petraske loosened the reins at his new spots, ditching M&H’s famed house rules (“No hooting, hollering, shouting or other loud behavior,” etc.), as well as the reservations-only door policy. His latest bar, Middle Branch—run by longtime Little Branch lieutenants Lucinda Sterling and Benjamin Schwartz—plants a flag for artisanal cocktails in postfrat epicenter Murray Hill. This is no sly Trojan horse for tipplers in the know, hidden from the popped-collar masses with a windowless facade and an unmarked ingress: The bi-level drinkery, sporting open French doors offering an easy glimpse inside, practic 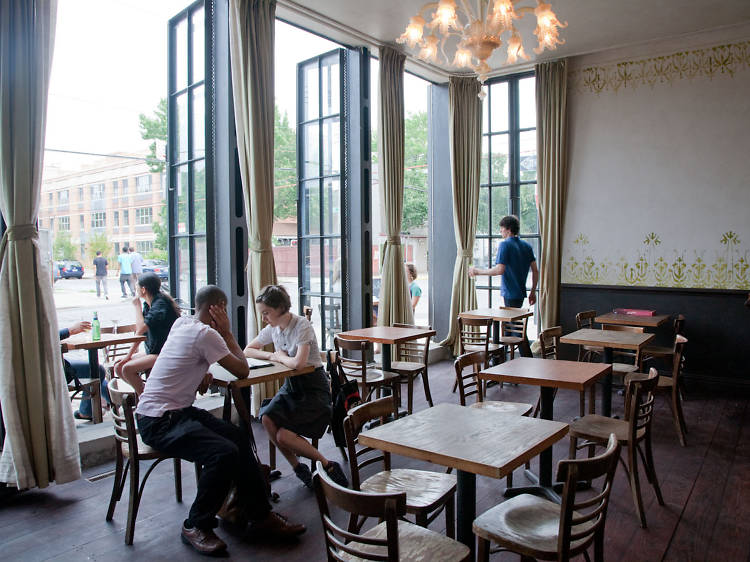 Before gastro fanatics hunkered down for a two-hour wait at Pok Pok Ny or cocktail nerds made the pilgrimage to Fort Defiance in Red Hook, seasonal bar Botanica beckoned Brooklyn locals to a quiet corner in the ’hood for its produce-driven libations and stunning Venetian-inspired room. But though the April-to-October spot gained fans from the borough, it never quite made its way onto the lips of culinary sophisticates. That may soon change (or should, at least): This past spring, one of those local admirers, Michelin-starred chef Saul Bolton—who discovered the Red Hook gem on a trip back from Fairway—rebooted the food and drink menus, with plans to keep the joint open year-round. Bolton, a pioneer of Brooklyn’s now-surging food scene, already had his hands full with his restaurants Saul, the Vanderbilt and (coming this fall) Red Gravy. But he was so charmed with Botanica that he tracked down owner Dan Preston, who also presides over the glass-windowed chocolate factory and distillery Cacao Prieto housed in the same 1846 Dutch building, and convinced Preston to let him take over operations. With Bolton’s own team in the kitchen and behind the bar, the gorgeous spot—easily one of the city’s best-looking watering holes—finally has destination-worthy food and cocktails to match the dreamy setting. DRINK THIS: Bolton installed his head barkeep at Saul, Dan Carlson, behind the stately copper bar at Botanica. Carlson’s breezy nine-drink list hits all the notes of today’s cocktail tr 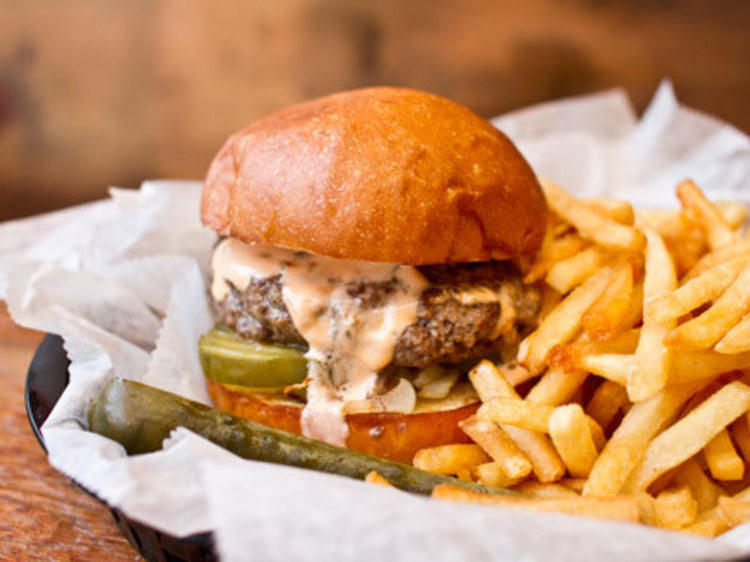 Who needs a road trip when you've got Grand Street in Williamsburg? The pub-crawl-friendly strip is fast becoming a microcosm of regional dive-bar culture, where you can chase Labatt longnecks at Ontario Bar with slugs of bourbon and honky-tonk ballads at the Dixieland-leaning Lady Jay's. And now, Midwest transplants and their hipster doppelgngers can find Jucy Lucys and cans of Milwaukee's Best at Burnside, a cozy tavern that mashes up heartland sensibilities with the 'hood's trademark DIY aesthetic. Instead of Vince Lombardi murals and trophy muskies on the wall, the three owners—including Wisconsin native Tim Miller—have crafted a sort of refined barnyard, with distressed gold-and-brown wallpaper and filament bulbs hanging from upside-down chicken feeders. We wouldn't mind if they dialed up the kitsch a bit (pond hockey on the patio?), but the easygoing spot is still a fine—if somewhat generic—place to post up with your crew for the evening. DRINK THIS: It's best to adopt a when-in–Chippewa Falls philosophy when perusing the chalkboard suds menu, which offers some rare-in-NYC (if not necessarily delicious by craft-beer standards) Badger State bottles like Stevens Point lager ($5). There are also a couple pedigreed Midwestern breweries—Founders from Michigan, and Illinois's Two Brothers—represented on the eight draft lines, but we wish they'd pushed the theme further. How about some Jolly Pumpkin? Leelanau? Goose Island? The rest of the taps are filled out with the usual su