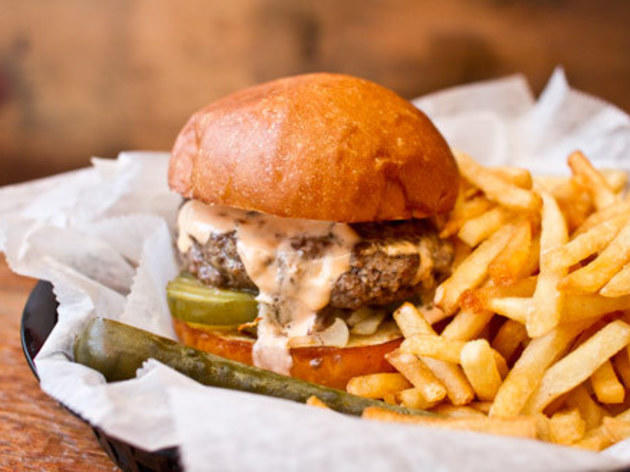 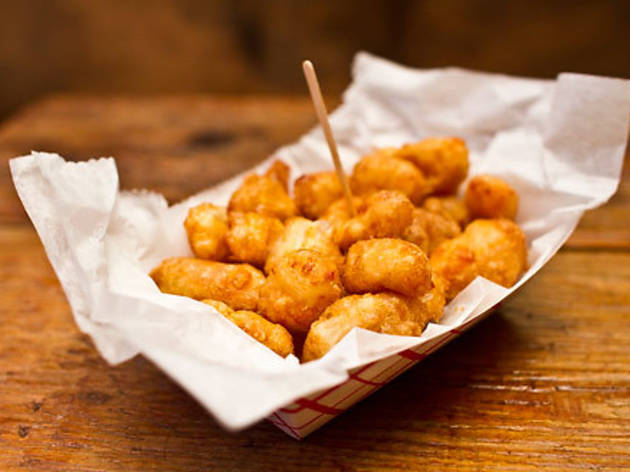 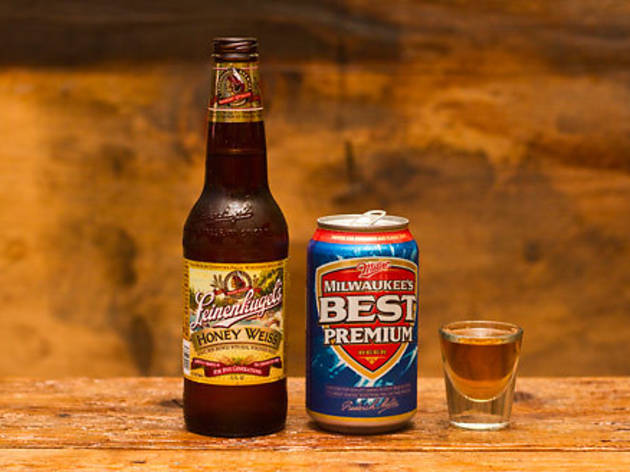 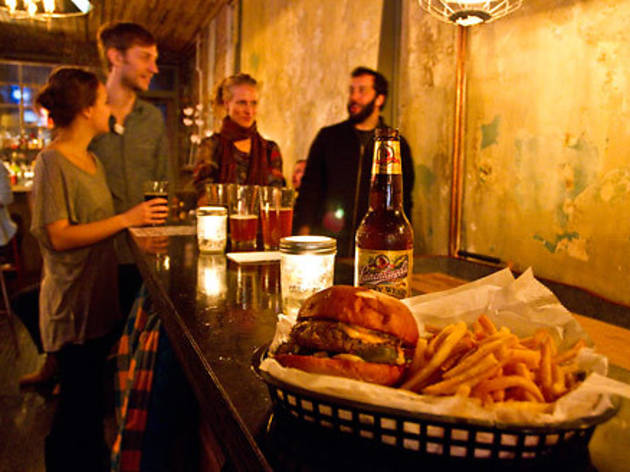 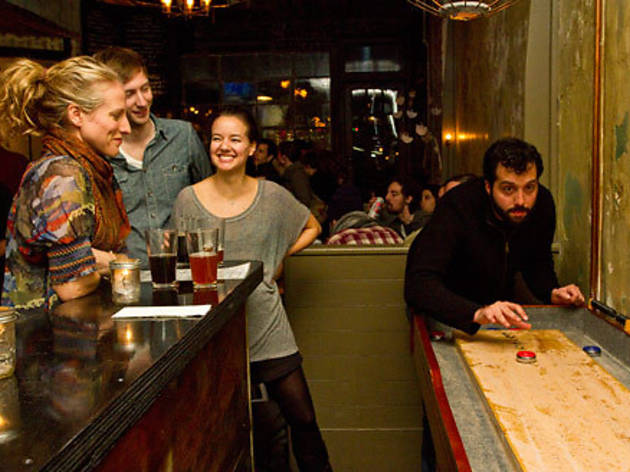 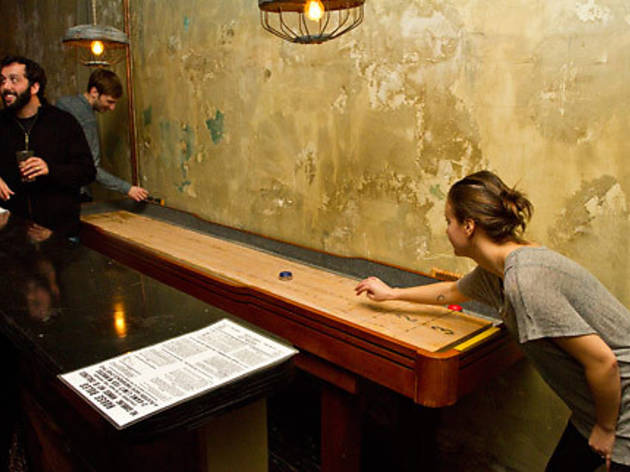 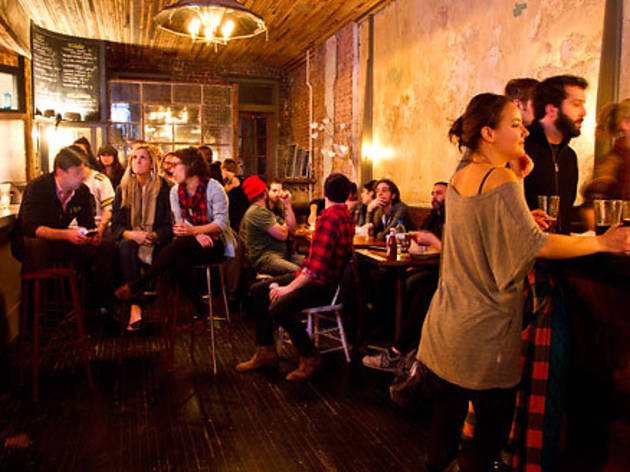 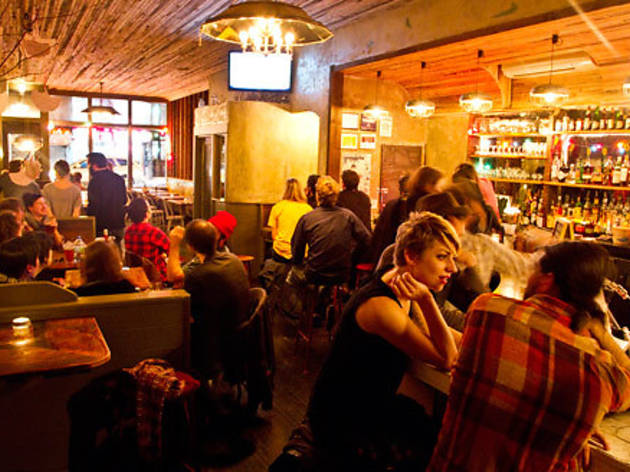 Who needs a road trip when you've got Grand Street in Williamsburg? The pub-crawl-friendly strip is fast becoming a microcosm of regional dive-bar culture, where you can chase Labatt longnecks at Ontario Bar with slugs of bourbon and honky-tonk ballads at the Dixieland-leaning Lady Jay's. And now, Midwest transplants and their hipster doppelgngers can find Jucy Lucys and cans of Milwaukee's Best at Burnside, a cozy tavern that mashes up heartland sensibilities with the 'hood's trademark DIY aesthetic. Instead of Vince Lombardi murals and trophy muskies on the wall, the three owners—including Wisconsin native Tim Miller—have crafted a sort of refined barnyard, with distressed gold-and-brown wallpaper and filament bulbs hanging from upside-down chicken feeders. We wouldn't mind if they dialed up the kitsch a bit (pond hockey on the patio?), but the easygoing spot is still a fine—if somewhat generic—place to post up with your crew for the evening.

DRINK THIS: It's best to adopt a when-in–Chippewa Falls philosophy when perusing the chalkboard suds menu, which offers some rare-in-NYC (if not necessarily delicious by craft-beer standards) Badger State bottles like Stevens Point lager ($5). There are also a couple pedigreed Midwestern breweries—Founders from Michigan, and Illinois's Two Brothers—represented on the eight draft lines, but we wish they'd pushed the theme further. How about some Jolly Pumpkin? Leelanau? Goose Island? The rest of the taps are filled out with the usual suspects like Kelso and Bear Republic ($5–$6 each), though many patrons are happy enough fueling games of shuffleboard with $5 Beast-and-bourbon combos.

GOOD FOR: Green Bay Packers fans. While Burnside is not a sports bar, the owners break out the TV for Pack games, providing an alternative for those who can't join the rowdy cheeseheads at Kettle of Fish in the West Village each Sunday.

THE CLINCHER: Homesick Midwesterners and American-eats obsessives will want to peruse the brief menu of heartland classics. Fried cheese curds ($5) are re-created with cheddar curds from Beecher's Handmade Cheese; purists may find them lacking in that squeaky quality that marks the genuine article, but gooey, battered cheese goes pretty well with cheap beer and bourbon. Better is the plump bratwurst ($6), shipped from Sheboygan, Wisconsin, and cooked on the grill—slather the juicy, coarse-ground sausage in beer mustard. Finally, there's that Jucy Lucy ($7)—the misspelling is an intentional tribute to Matt's Bar, one of the two Minneapolis restaurants that claim to have invented the cheese-stuffed burger riff. The gussied-up bun used here—currently a pain au lait from Tom Cat Bakery—is a bit bready, the pocket of American cheese not as molten and gushy as it should be. Still, the well-seasoned beef and tasty grilled onions pick up the slack.

OVERHEARD: "I used to buy 30 of these for $10 at Wisco."—A patron recalls scoring Stevens Point lagers at Midwest prices