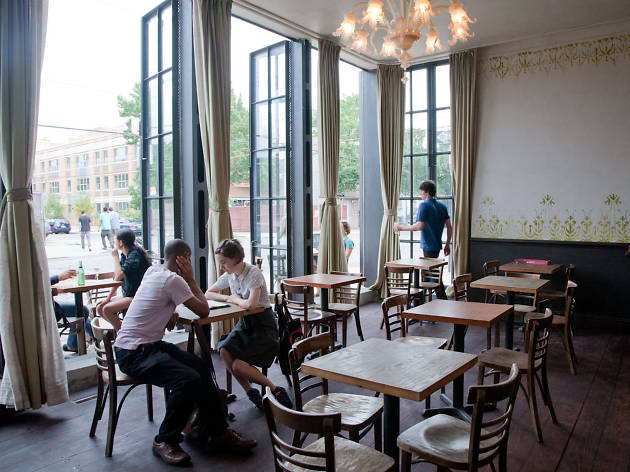 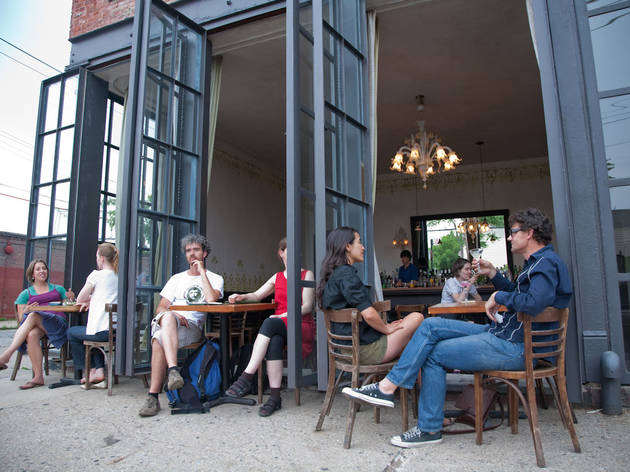 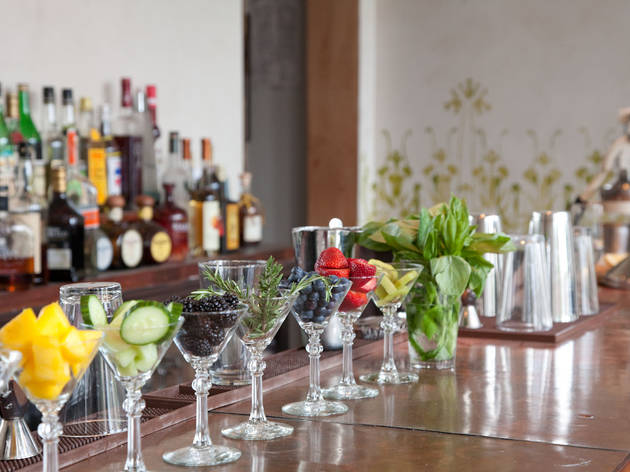 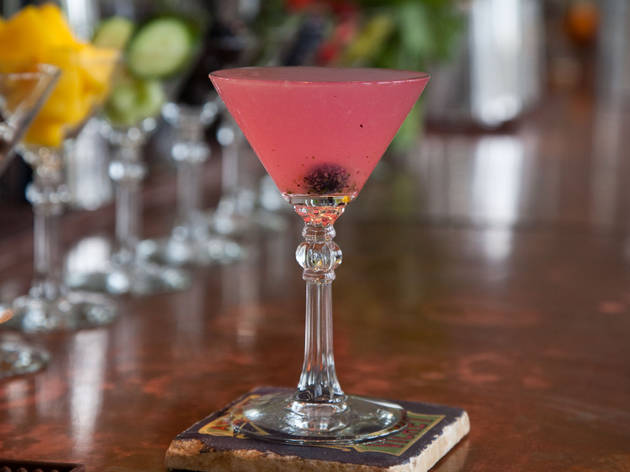 Before gastro fanatics hunkered down for a two-hour wait at Pok Pok Ny or cocktail nerds made the pilgrimage to Fort Defiance in Red Hook, seasonal bar Botanica beckoned Brooklyn locals to a quiet corner in the ’hood for its produce-driven libations and stunning Venetian-inspired room. But though the April-to-October spot gained fans from the borough, it never quite made its way onto the lips of culinary sophisticates. That may soon change (or should, at least): This past spring, one of those local admirers, Michelin-starred chef Saul Bolton—who discovered the Red Hook gem on a trip back from Fairway—rebooted the food and drink menus, with plans to keep the joint open year-round. Bolton, a pioneer of Brooklyn’s now-surging food scene, already had his hands full with his restaurants Saul, the Vanderbilt and (coming this fall) Red Gravy. But he was so charmed with Botanica that he tracked down owner Dan Preston, who also presides over the glass-windowed chocolate factory and distillery Cacao Prieto housed in the same 1846 Dutch building, and convinced Preston to let him take over operations. With Bolton’s own team in the kitchen and behind the bar, the gorgeous spot—easily one of the city’s best-looking watering holes—finally has destination-worthy food and cocktails to match the dreamy setting.

DRINK THIS: Bolton installed his head barkeep at Saul, Dan Carlson, behind the stately copper bar at Botanica. Carlson’s breezy nine-drink list hits all the notes of today’s cocktail trends: heavy on bitter spirits with a nod to the growing popularity of pisco, plus a voguish bottled cocktail and a couple of shrubs—the old-timey drinking vinegars that have come back into fashion. The herbaceous Dune Grass is a must-order, a mix of full-bodied El Dorado White Demerara rum with the orange liqueur Rhum Clèment Creole Shrubb, plus fleur de sel, fragrant lemongrass, spicy shiso and sweet cucumber. Less successful is the Incan Ruin, a yuzu-infused variation on the pisco sour: The frothy quaff, sweetened with Cocchi Americano and Apry (an apricot brandy), tastes a bit flabby without the acidic punch of the traditional lime juice. The carbonated and bottled Otro Clavo (Hendrick’s gin, Aperol, St-Germain, pineapple, almond tincture), meanwhile, might have come off as gimmicky if it weren’t so pretty—the frosty glass decanter sets a jubilant tone for day drinking on the weekend when the bar opens in the afternoon.

GOOD FOR: Red Hook locals, frazzled Ikea refugees in need of a stiff drink and staycationers on the hunt for a transporting escape. Faded green wall stenciling, a milky Murano glass chandelier and an unobstructed view of a deserted cobblestone intersection—framed by open French doors—add to the lovely drinkery’s Old World mystique. Do as other patrons do: Power down the smartphone, and enjoy the night air and a refreshing drink, instead of blinking at your Twitter stream.

THE CLINCHER: Bolton may not be manning the stove every night, but the decorated chef’s short bar menu stands with the best hoity-toity drinking snacks in town. He devised the small plates to honor owner Daniel Preston’s Latin (crispy plátanos) and Italian (crudos) roots, as well as the chocolate factory (pudding Cacao Prieto) next door. Try the outstanding crispy-skinned chicken thigh—a juicy slab atop a bed of sweet local corn kernels, nuggets of chorizo and lamb’s quarters (a wild green)—or the pernil: shredded slow-cooked pork woven into a mix of rich yellow rice, nutty pigeon peas and enlivening bits of cilantro.