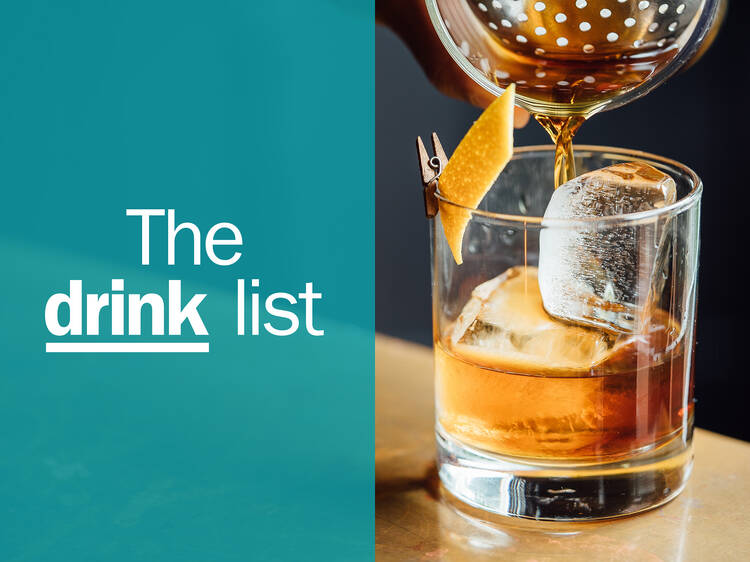 Looking to reward yourself at the end of a long week? All dressed up with nowhere to go? There's a saying in Korean: "Mul-i jotda," meaning the crowd is sexy and the standards are high. Head to these bars where the "mul-i jotda" and let loose on a Friday night. 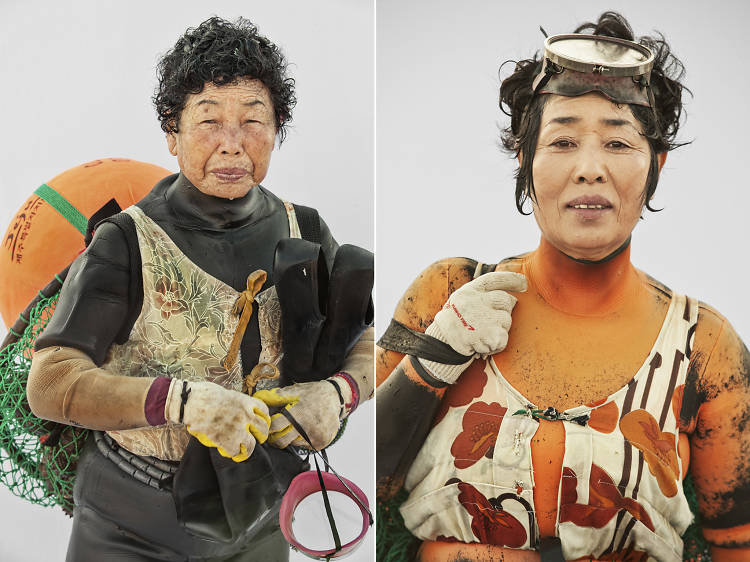 Seoul eye: under the Jeju sea 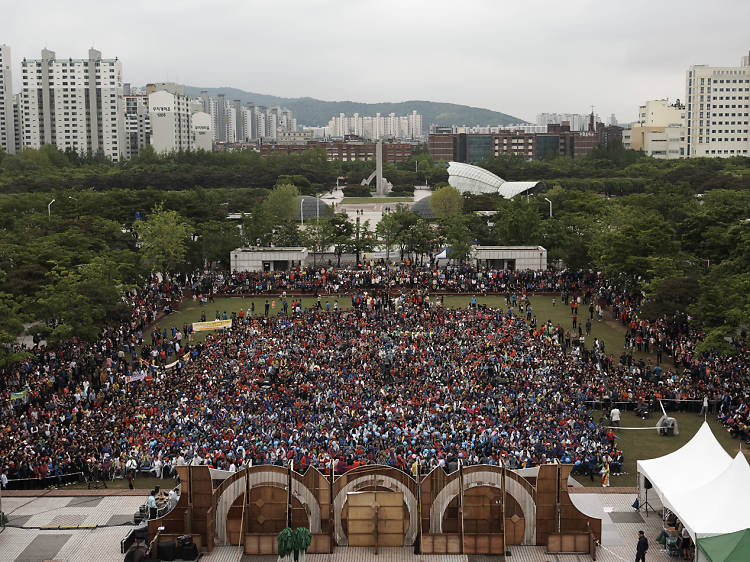 In the ‘80s, many of us listened to the radio the way that people nowadays cradle their phones. It’s a time that’s foreign to both Millennials and visitors to modern Seoul, but dig around for old footage of the National Song Contest, and you’ll find singing ajummas, kids and proud grandmas from all over Korea who have competing ever since November 1980. The longest-running music program in Korean history, the TV show and contest mainly takes place in rural districts like Chungcheongnam-do to pick the town’s most captivating performer. It’s a nation-wide program that bestows a generous amount of stage time to local restaurant owners and housewives alike who are as passionate as the crowd is, but when the show ends, the contestants return to their everyday lives in which they are only stars in the eyes of their families and friends. However, photographer Byun Soon-choel extends the contestants’ 15 seconds of fame by photographing their full-length portraits in “National Song Contest,” a photo series he’s named after the TV program. 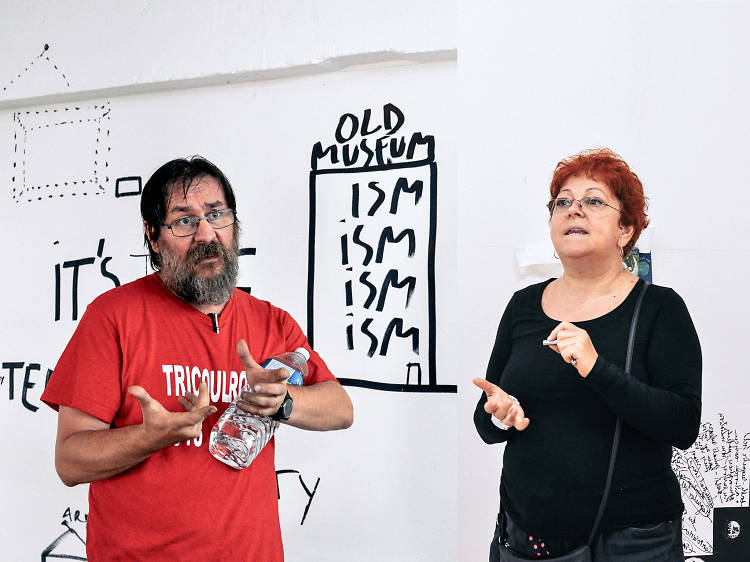 Dan and Lia Perjovschi met at an art school for art when they were ten, and now they are married and both self-sustaining artists. Notorious for scribbling on the walls of art museums like a witty but a politically aware child, Dan has been illustrating for a Romanian newspaper since the ‘90s. Lia, on the other hand, collects objects from art gallery shops all over the world, jots down handwritten notes from her readings on science and art history and merges everything together into giant, drawing-based installations. Although the two Romanian artists are equally passionate about the social and political climate at all times, they create very different work. Time Out Seoul talked to the artists on the day of their opening, where Dan cracked jokes at the end of each sentence, and Lia, gave a tour of her “Knowledge Museum” like an articulate and intelligent historian.    For the exhibition, both of you packed light—Dan brought four markers to draw with and lia, some figurines and objects to install. Dan We want to make valuable art out of small, simple and inexpensive things. For instance, you’ll find a bunch of postcards stuck on the walls in the beginning part of the exhibition. I sent these to the Total Museum starting this January, and it’s a 30 dollar production altogether.   Lia’s "Knowledge museum" is like a 3D mind map on seven disciplines, including the earth, bodies and art, but it's all written in English. How should a Korean-speaking viewer approach the work? Lia Im 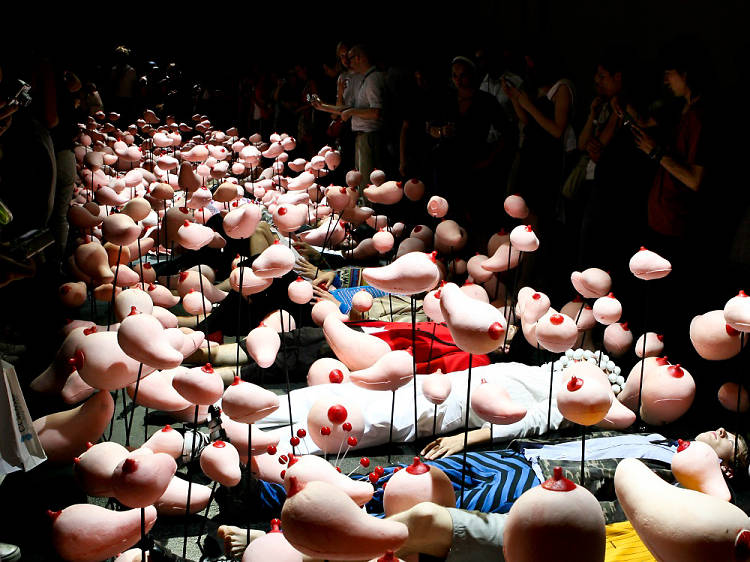 Art exhibitions to look out for now

If there is one thing that these art exhibitions have in common, it is that they all present a gateway into a fantastical world, given its scale and new media magic. Fashion designer Henrik Vibskov transforms Daelim Museum into a runway tailored for the slim and the ordinary, and the world of Vivian Maier is revealed at Sungkok Museum in black and white (and you may feel a little self-conscious looking at the photographs, as her rolls of films were left undeveloped, even after her death). Look below to see Time Out's curation. 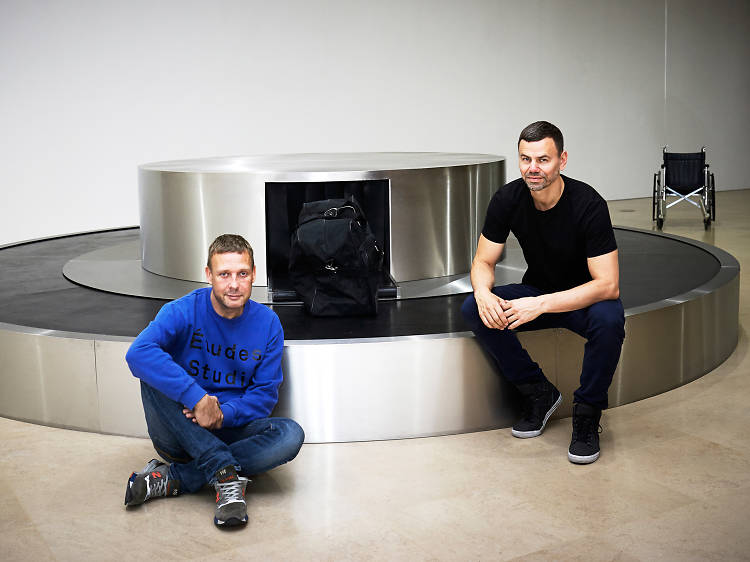 It’s been 20 years since poet Michael Elmgreen and theater performer Ingar Dragset met in a club in Copenhagen—a romantic encounter that evolved into a professional artistic career. Elmgreen & Dragset are no longer a couple, but they remain best friends, and always “have something to express.” From building a Prada store in the middle of the Texas desert to transforming the pavilion at the Venice Biennale into the house of a deceased art collector, this Copenhagen-based duo prods viewers into forming their own narratives about the exhibition. The two visited PLATEAU for the first time two years ago to source inspiration, and now the art museum has been transformed into an international airport.   So why an airport? PLATEAU is quite unusual in many ways in terms of how it’s situated on the ground floor of a busy corporate building and then connects to a semi-public area with a huge food court, escalators, restrooms and so on. The art shop seems to belong to the gallery and the visitors to the food court. We have thought about the similarities between institutions such as airports and shopping malls and museums before, and this was the perfect location to explore these ideas further. Why do these types of places look the same all over the world, why do people behave the same in them and why does it seem that we are always stripped of our identities in these places?   What draws you to this kind of site-specific work? We both share this fascination with experimental narration, “ 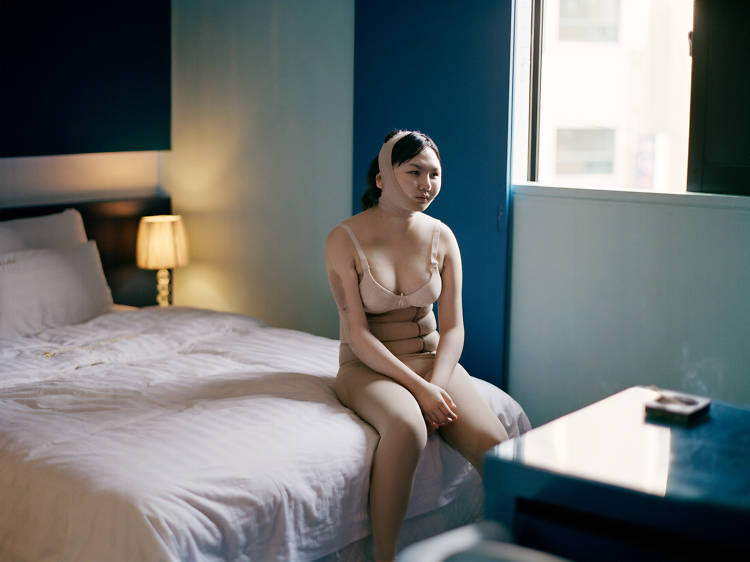 It’s never a pleasant task to serve as the hands and feet of a person in need, especially if he or she is a full-grown adult. In spite of this fact, artist Ji Yeo posted an ad on multiple plastic surgery community sites. She reached out to women who’d just had plastic surgery and, out of her own pocket, paid for their food and accommodations. 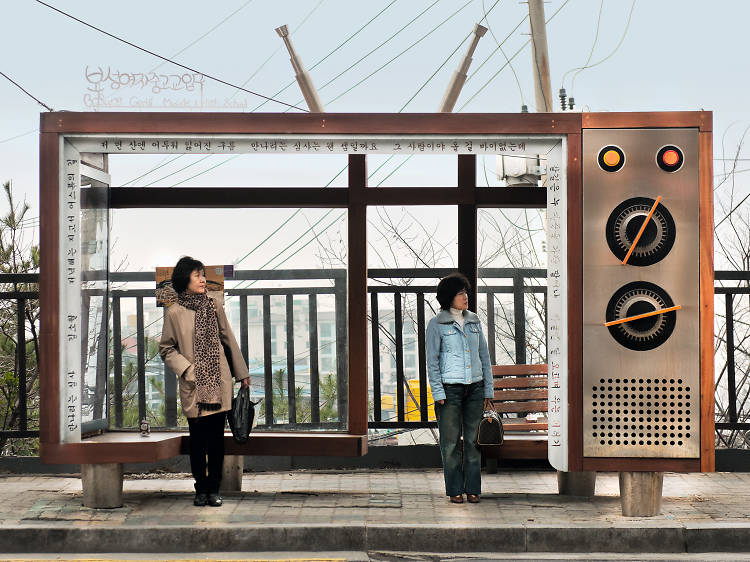 Pyongyang is poverty-stricken and repressed, but here in Seoul, people are quite stylish and happy with an awesome selection of food to choose from. Stereotypical as it is, this is the most general image that many have of the North and South. Unlike the South Korean locals who make these claims without experiencing the North, German architect and photographer Dieter Leistner, who has been to both countries, argues that the conjured image is a cliché. 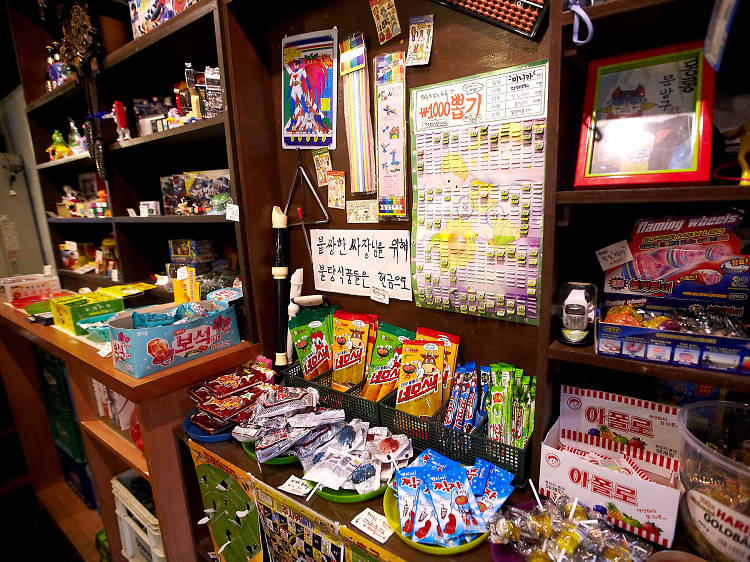 Gimme those days of old 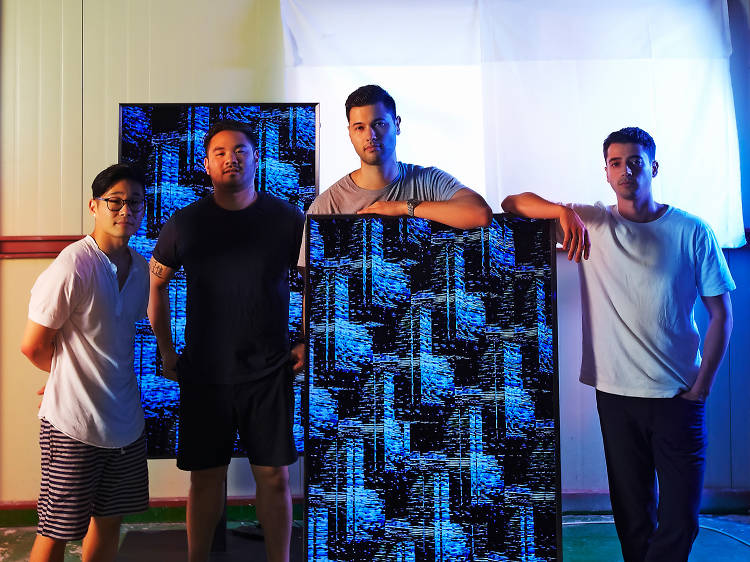 The newly formed artist group currently resides at New INC, a selective creative space for those in art, technology and design. The group includes Don, who has worked in the fashion industry for over seven years; Paul, who specializes in fabrication; Jesse, who studied new media at UCLA; and Drew, who is in charge of software. Maxrelax initially wanted to publish a lifestyle magazine on “stuff they like,” but the group has moved a step further by collaborating with PKM artists and recognized fashion designer, Kye, to explore internet culture as a tool for building and marketing their exhibition.   What is it like working at a studio in the middle of nowhere in Ilsan? Don We call it “shedlife.” Every day, it’s ramen, Spam, microwaveable rice and soju. Paul But we have so much work to do, so it’s almost kind of a good thing. On weekends, we periodically go to Seoul, take a break and have a warm shower.    So, PKM is also a residency, like NEW INC.   Jesse Yeah. We started out last year doing design work for PKM. We did their entire branding strategy, their logo and helped them design their booth at Hong Kong Art Basel. The curator was into creating a generation-defining show to talk about new art being  created in Korea.    What’s the vibe at New INC like? Drew In a lot of ways, it’s a glorified co-working space at its barebones, but the New Museum doesn’t own anything, and the strongest advantage of the program is the general community network. It’s really rare to know someon 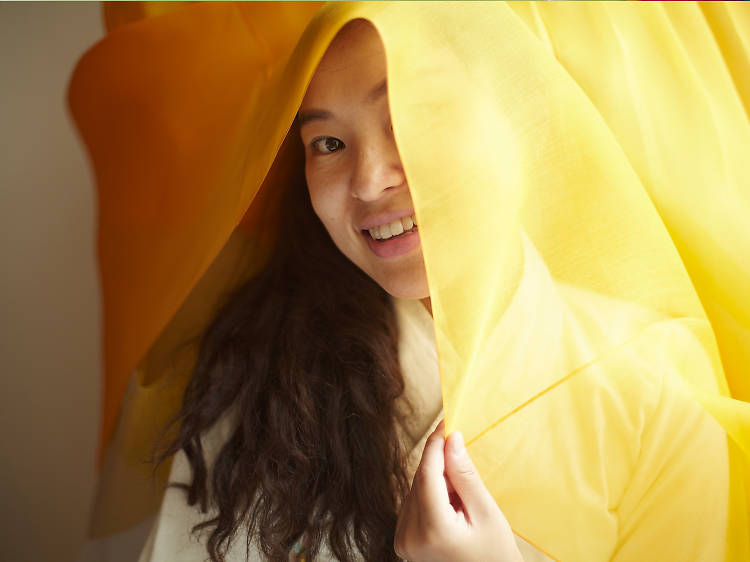 When Oh In-Kyung first started her design house, she wanted a space where she could make pretty garments, hold exhibitions and have a glass of wine or two with her friends—a whimsical world that she could grasp and cherish. But making the move from her small studio in Yeonnam-dong to Wonseo-dong, her world has expanded into a full-fledged business called Inojudan, a design studio specializing in custom-made hanboks. Delving into fashion in her thirties in New York, she took inspiration from her foreign friends who weren’t afraid to wear a pair of moccasins with a lazy t-shirt. “When it comes to my designs, I am pretty liberal with fabric choices, but as for the garment itself, I stick to the traditional structure and lines.” She herself wears jeogori (upper garment of a hanbok) with the waist slit open matched with a pair of jeans and flats on days “on,” as well as off. 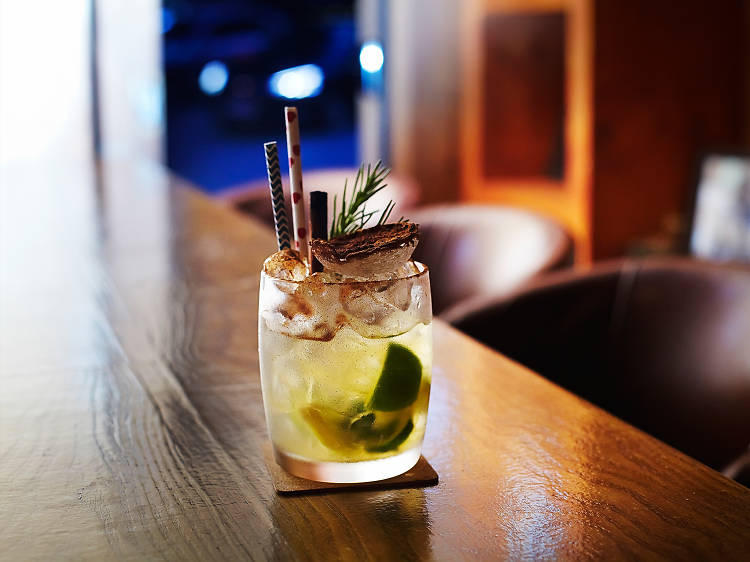 A day without a “won”

(Michelle spends a day in Seoul with no money) 9:30am On an empty stomach, I headed out with a camera and a T-Money card. 10:00am I walked over to the Cheonggyecheon to get my ride. As a program offered by the Seoul City government, I rented a blue bicycle for free in exchange for my name, ID and phone number. 10:40am I rode along the stream towards Seongsu Bridge. There were a decent number of riders darting by the sea wall, as the sun was out in a yellow blaze. As hard as I pedaled on, the bike didn’t catch much wind or speed. I guess that’s what you get for a free bike. 11:15am Overlooking the bridge, I rode into a dark tunnel towards Seoul Forest. Sandwiched in between a couple and a family of three, I lay down on the grass but couldn’t fall asleep knowing that I had to return the bike within three hours. Instead, I dragged my bike over to see the deer. The dispenser for the food pellets were down, as the poor deer were infected with foot-and-mouth disease. It made me insanely sorry and hungry all at once. 1:00pm I took the same path back to the bike rental booth. Getting my ID back, the water dispenser in the corner of the booth caught my attention. I made a detour to the bathroom, but ended up coming back to ask for a glass of water. To my thirsty lips, it tasted as good glass of whiskey. 1:40pm My rib cage was about to give, like how I imagine pregnancy contractions. I immediately headed over to the nearest Emart in Wangsimni. The sign at the sample stands read “eat as