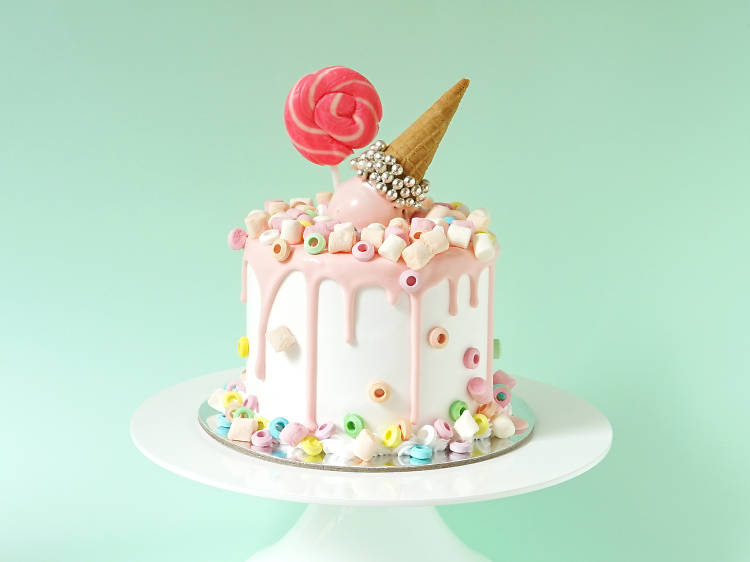 A party without cake is just a meeting. From the intricate sugar flowers to the velvety tiers of fondant, a bespoke cake is a work of art. For a unique custom creation that tastes as good as it looks, these independent dessert artisans will make the cake of your dreams for every occasion. 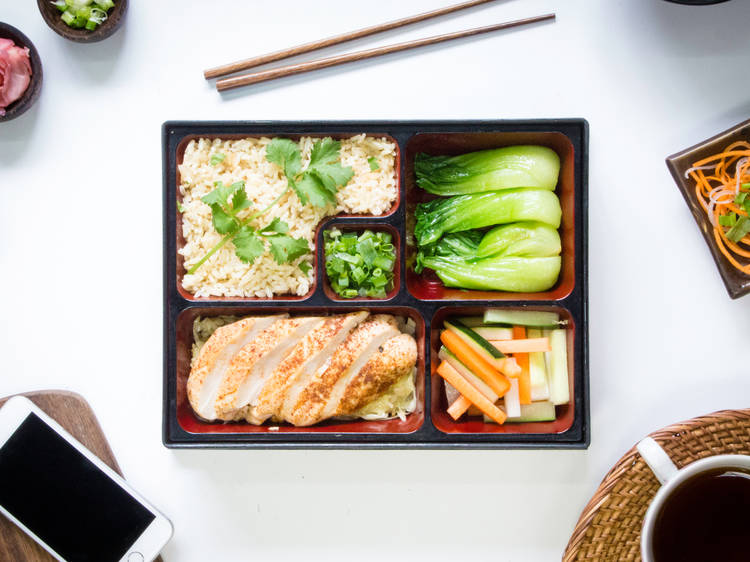 Grabbing a bite at work can be a real pain. You’re either picking up the same tired old sandwich from around the corner or queuing for ages during the lunch hour rush – often in pouring rain or scorching heat. Thankfully, a tidal wave of new lunch delivery startups has hit town, making it easier than ever to get healthy, balanced meals delivered straight to your workstation with just a few clicks. Next time you need to fill your stomach while powering towards a deadline, check out these office meal services. 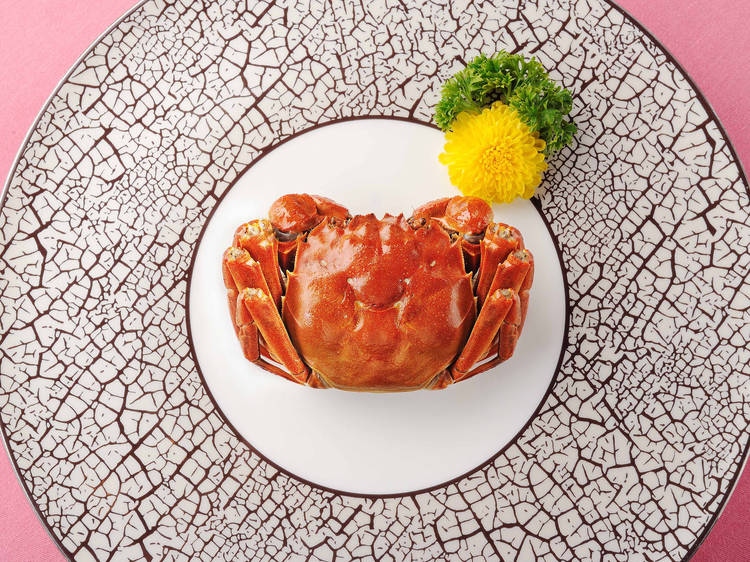 Where to eat hairy crab in Hong Kong this autumn

It’s October, which means hairy crab season is upon us once again. Here are some of the best places to eat this highly anticipated seasonal crustacean. 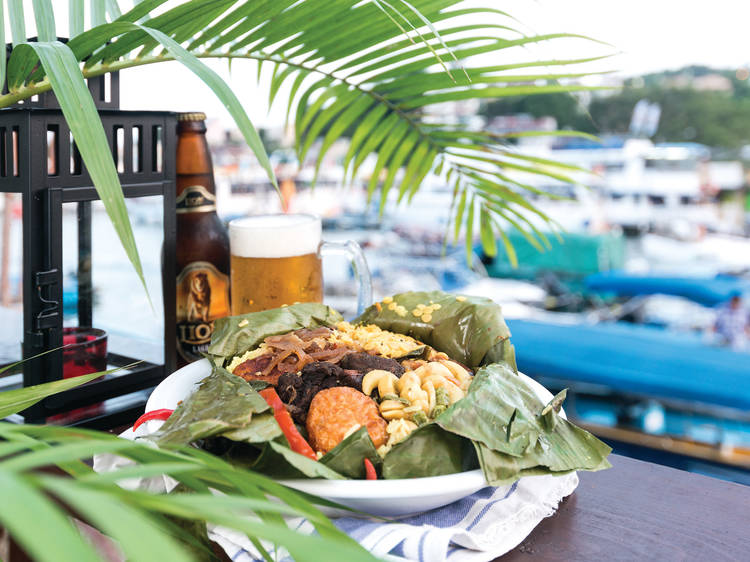 The best restaurants in Sai Kung

As the summery weather draws to a close, we can’t stop daydreaming about squeezing in one last day trip to Sai Kung. This idyllic town boasts a gorgeous waterfront as well as ample opportunities for sailing, kayaking and puppy-watching, but most importantly, it’s a thrumming hotspot for food-lovers. 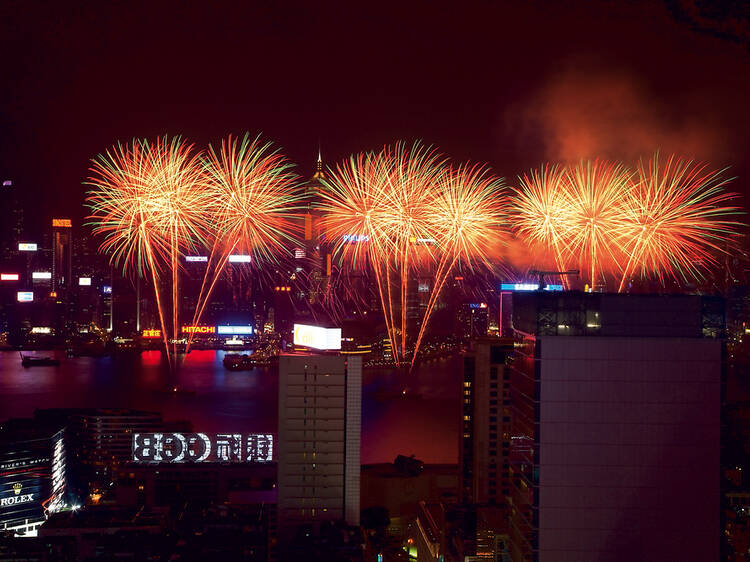 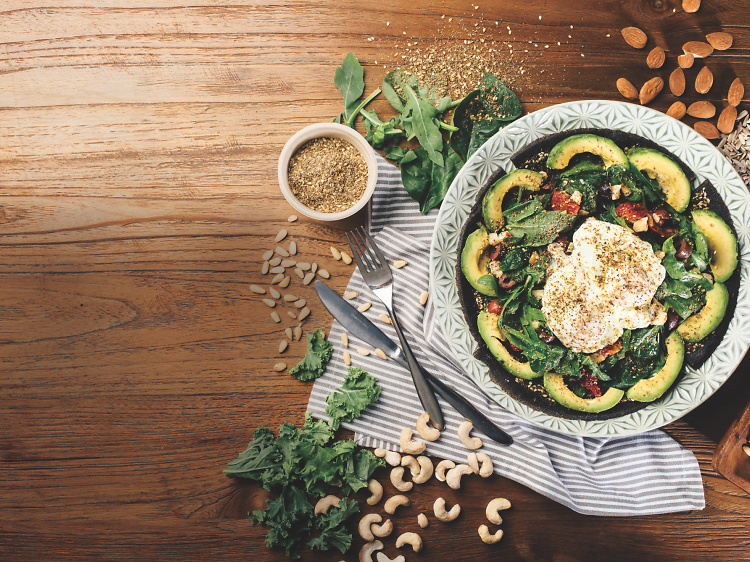 Superfoods: Food to save the day

What makes superfoods super? While there’s no strict definition, superfoods are so labelled because they contain components that fortify our health and make us feel fit, refreshed and alert. Not only do they provide essential vitamins and minerals, they also contain important antioxidants, such as flavonoids, that protect us against disease and inflammation. Some superfoods are also a great source of plant protein, which is associated with better cardiovascular health and lower mortality compared with animal protein. Identifying and eating superfoods is a great way to eat smart, feel good and live longer. 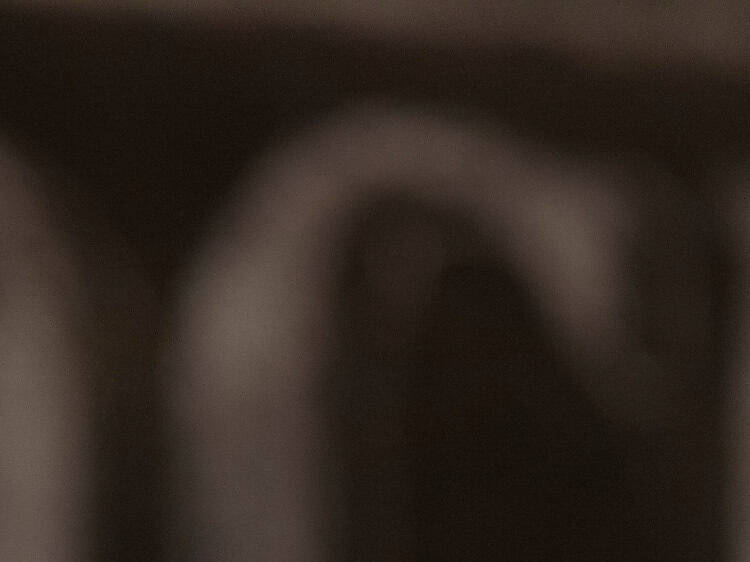 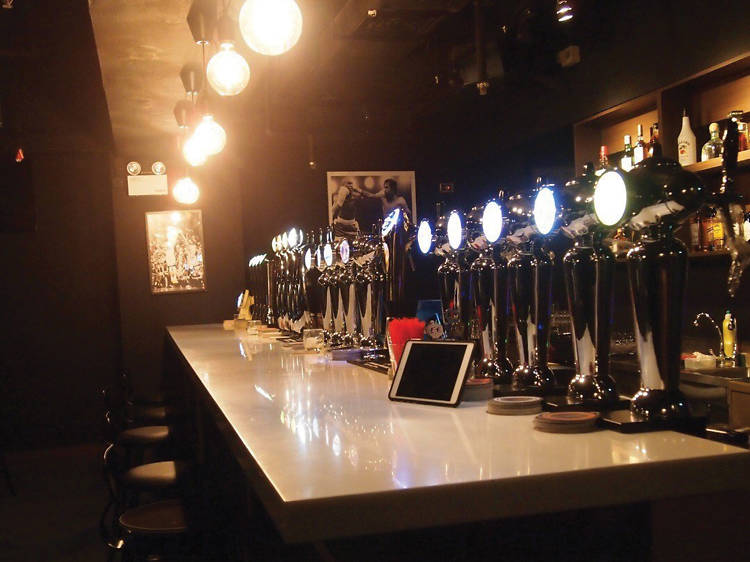 The swanky strip of restaurants and bars along Knutsford Terrace has a new addition in the form of Tim’s Beer House, a spacious American- style sports bar. The low-key interior is painted entirely black, with framed photos of Stephen Curry and Manny Pacquiao adorning the walls. Ample booths by the window provide space for large groups and customers are free to try their hand at pool, beer pong or electronic darts. The taps here dispense around 20 varieties of beer, most of them big commercial staples like Stella Artois, Guinness and Singha. Seeking something less commonplace, our eye falls on the Estrella Damm Lemon ($88), a lager shandy. It turns out to be an overly citrusy, one-dimensional affair with high carbonation. Although the first few gulps are refreshing, we’re not fussed about finishing the rest. We also order a coconut daiquiri ($98), a surprisingly delicious concoction of rum, coconut cream and lime. It’s simultaneously icy and milky, with a tangible taste of coconut pulp. However, we’re not sure we can recommend Tim’s on the strength of its daiquiri alone. With so many more exciting options in the vicinity, you’d probably only end up here if everywhere else proves full. 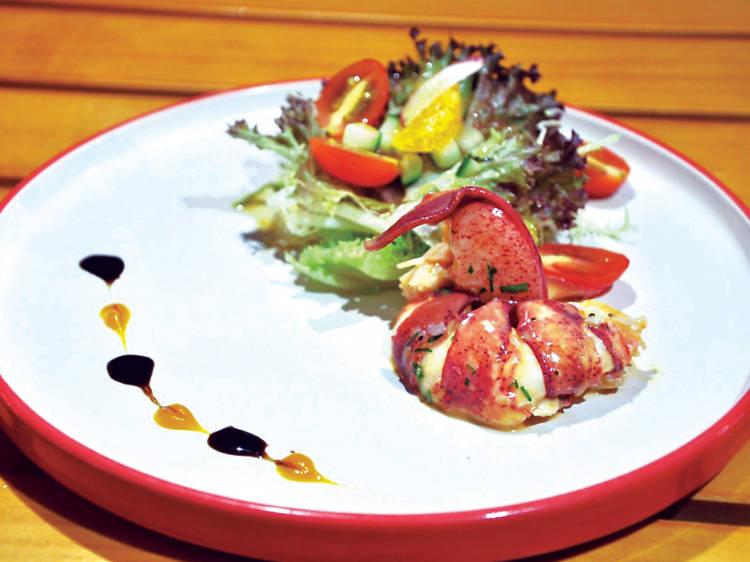 A French restaurant that lies somewhere between a gourmet palace and a casual bistro is still a rare sight in this city, which is why Warren holds plenty of promise. Tucked away down an alleyway in Tai Hang, this new intimate eatery is touted as both refined and relaxed, offering only three and four-course dinner sets for $360 and $400 respectively. When we arrive, we’re seated in a red booth. An open kitchen with a tiled mosaic counter dominates the amber-lit space, which seats about a dozen diners, with a few more tables going alfresco – plenty of date night potential. Satisfied with our environs, we dig into our starter, pan-seared foie gras. Gently caramelised on the outside, it’s fatty and moist the way we like it and comes accompanied by the acid accents of port wine sauce and balsamic vinegar, as well as a sweet mango chutney with ground peanuts. Buoyed by the success of the starter, we move on to the French onion soup. And this isn’t a gooey, cheesy version of the dish. Rather, it’s a more subtle triumph – sweet rather than salty, with just a tiny dash of stringy Gruyère and brimming with broth-soaked onion slices to chew on. Then it’s our main’s turn to shine, a surf ’n’ turf that costs an extra $60 and is, a looker, consisting of a vermilion swirl of lobster tail arranged next to a handsome cut of sirloin. The crustacean is jelly-like and succulent and despite the steak being slightly on the tough side, the flavours still work well together. The mushroom gravy is st 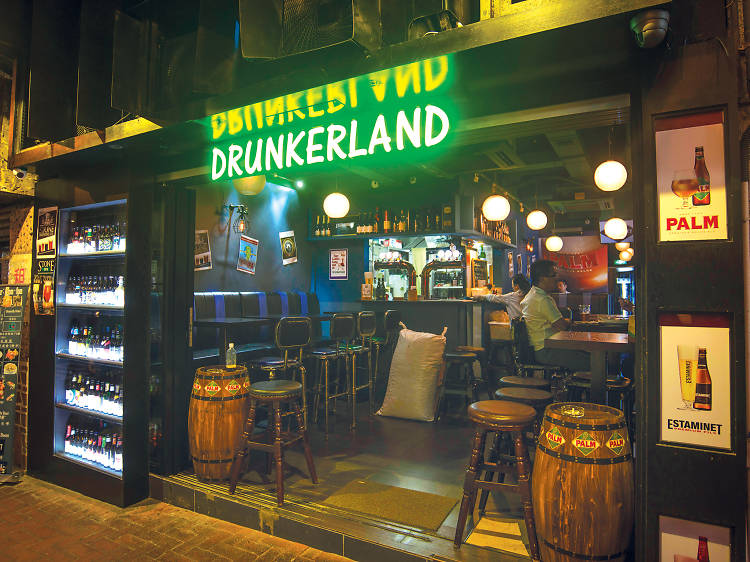 Drunkerland is taking craft beers out of the hands of the hipsters and placing them in the more casual context of a downtown community watering hole. More than 100 brews are available here and over half of them are Belgian, with Japan, the UK, the US and Hong Kong splitting up the rest. Spoiled for choice, we go for a Kagua Blanc ($95) from Japan on a whim. It turns out to be a lemon-coloured blonde ale with strong citrusy notes of honeyed yuzu and a clean finish. It’s fresh and unusual. Hopping to the other end of the spectrum, we ask for something darker and get an off-menu Chipotle Porter from Mikkeller ($90). When it arrives, we freak out (in a good way) over its intensely smoky, roasted aroma. In contrast to the straightforwardness of the Kagua, there’s a tumble of notes to be experienced here – sweet molasses up front, followed by bitter chocolate tangs and some lingering chipotle spice on the finish. It’s not the swishest spot in the world but Drunkerland’s a great place to have a good time with friends while quaffing some pretty fine beers. This bar proves you don’t have to get all fancy and hipster with your craft brews. 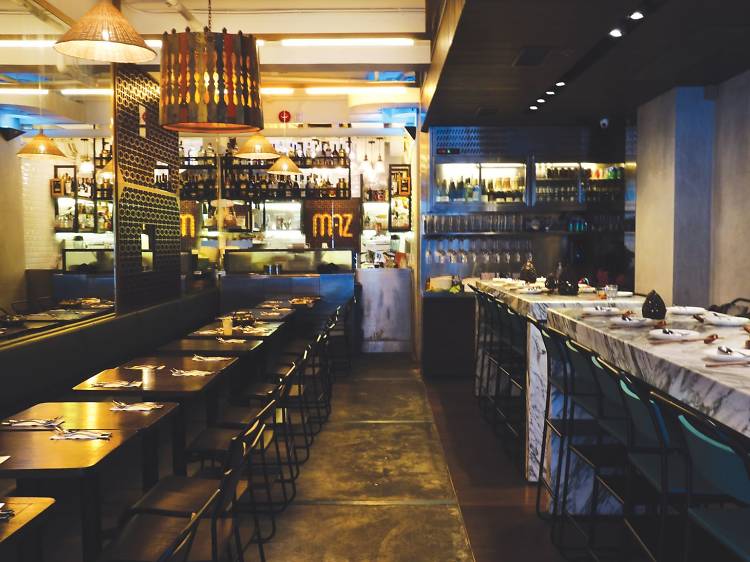 Here’s the thing about Thai food in Hong Kong: we love the cuisine but such restaurants are often either overpriced or inhabiting uninspiring environs. So when new Thai eatery Maz opens in the space that used to house the Wan Chai branch of hipster noodle joint Foxtail & Broomcorn, we perk up. The atmosphere’s an instant winner. Some of the decor is maintained from the previous occupant, most notably the marble communal tables. The light fixtures fashioned from conical straw hats conjure a subtle tropical touch without feeling too cliché. The deep-fried wontons with mango and shrimp ($66) are a tasty start. Despite the mango being overpowered by the fleshy shrimp and thick wonton batter, they’re piping hot and crunchy, and the sour and spicy sauce is excellent.  The bloopers start when the green curry with free-range chicken ($76) arrives. The familiar fragrance kicks our saliva buds into high gear but the dish comes without any rice or roti. To add insult to injury, a bowl of plain white rice costs $15. The curry deftly balances its light, sweet texture with a richly creamy flavour, although the spice level is almost nonexistent. The chicken itself is so depressingly bland that it might as well not be there. The desserts read great on paper, unfortunately the restaurant seems unprepared to actually serve them. The durian mousse is unavailable, so we go for a mango sticky rice ($66) instead, which we’re told will require a fairly lengthy wait. When it finally arrives, we find

Hong Kong’s coffee culture is changing – it's not just about caffeine fixes anymore, it's also about a relaxing ambience, quality grub and flavorful, top-notch coffee. That’s why Pacific Coffee is taking it to the next level with Monogram, their brand new concept store in Tsim Sha Tsui’s Heritage 1881. The vibrant, airy space is the perfect place to socialize as you dig into a plate of old Hong Kong-style waffles with a side of espresso croquant ice cream. Other exclusive menu items include crispy cheese chicken wings with yuzu and satay dips and an earl gray vanilla ice cream float that left us craving more. 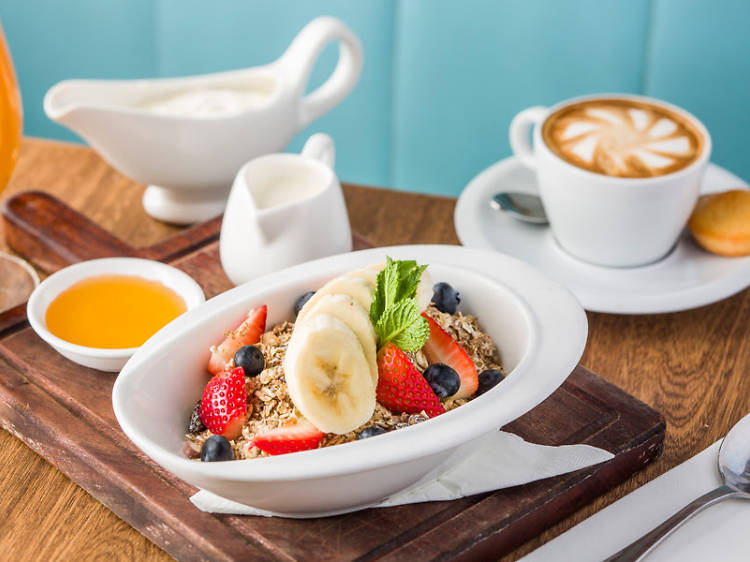 All-day bar and restaurant FAB (French American Bistro) dishes up classic comfort dishes in one of the best people-watching spots in town.

Paws for thought: Is Hong Kong a dog-friendly city?

Dog ownership is booming in Hong Kong – but with small apartments and few parks to walk your pooch, is our city really a pet friendly space? From proud huskies to sombre-eyed pugs to pampered bichon frises, there are more dogs than ever on the narrow streets of Hong Kong. However, our city’s laws severely limit the ways dogs can access public spaces, which inflicts a physical and mental toll on Hong Kong’s burgeoning canine population. Except for guide dogs, pets are banned from the city’s public buses and the MTR, as well as the vast majority of public parks. As a result, dog owners often keep their pets cooped up in their flat, denying their dog’s need for exercise and stimulation. “On a physical level, [lack of exercise] can lead to obesity and all the health consequences of being overweight, of which there are many – joint disease, heart disease, diabetes,” says Dr Adam West, a senior veterinary surgeon at the Society for the Prevention of Cruelty to Animals. “On a psychological level,” he continues, “the need to expend energy can find form in bad behavior. The dogs can be hyperactive and aggressive.” Some of the driving forces behind the recent increase in local rates of dog ownership are speculated to include increasing disposable incomes, a consistently low fertility rate and an aging population. In lieu of babies, Hongkongers appear to be opting, instead, to shower their attention on four-legged companions such as cats and dogs. According to census data, the number of