Sure, cocktail bars get all the glory and wine bars have a steady clientele, but San Francisco’s craft beer movement shows no sign of slowing down. Take the annual Beer Week fest, which in seven years has gone from 50 events to more than 700 suds-centric happenings all over the Bay Area. From frothy stouts to fruity Belgian ales, beer bars in San Francisco cater to just about every style and flavor. Tap into our favorite standouts for hundreds of local and international options.

RECOMMENDED: Full guide to the best bars in San Francisco 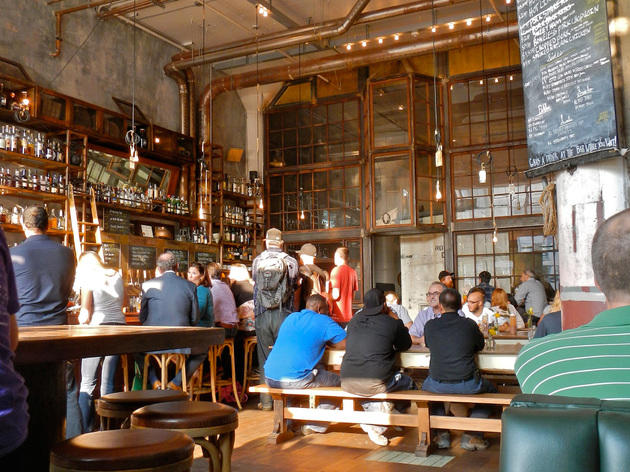 Magnolia in Dogpatch (big sister to the Haight-Ashbury’s beloved Magnolia Gastropub & Brewery) was probably the most eagerly anticipated microbrewery to open in the city in a decade, with cask-beer devotees waiting patiently through four years of construction delays and permitting red tape. By all accounts, it was worth it. Owner Dave McLean (whose resemblance to late Grateful Dead guitarist Jerry Garcia is only partially coincidental), has transformed a former can factory into a hip neo-industrial craft barbecue and beer-lovers haven. Exposed pipes, reclaimed wood communal tables, and a bar hung with ladders that slide across a sheet metal wall of liquor provide the backdrop for some 15-17 draft and cask beers (Spud Boy’s IPA to Smokestack Lightning imperial stout), as well as dozens of premium small-batch whiskeys. Across the room, Smokestack BBQ restaurant offers up brisket, hot pastrami, Wagyu beef back ribs, sausages, smoked duck and other meats by the pound, served on butcher trays. 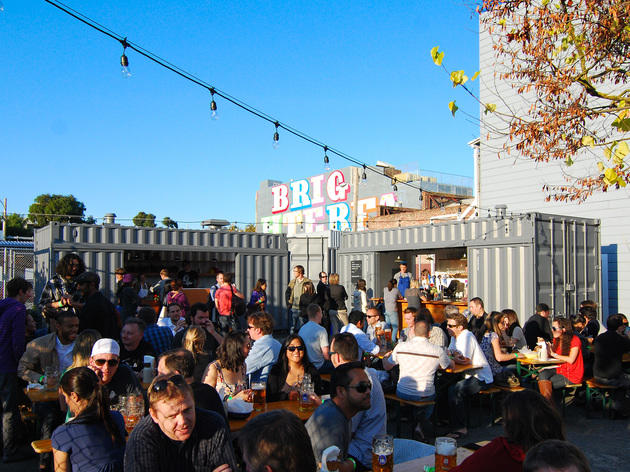 Rarely in San Francisco do you get to enjoy beer in the style to which the Germans are happily accustomed. The semi-permanent spinoff of German restaurant Suppenküche down the street, the über-hip outdoor beer garden consists of picnic tables and a bar/kitchen carved out of metal shipping containers, sidled up against the side of the SF Jazz Center. On warm afternoons and even cool ones (the bar provides wool blankets), the young, bearded, and thirsty kick back with liters of Stiegelpils and hefeweizen, or bottles of Underberg bitters and celebrate…whatever. The munchies menu provides a tasty Teutonic base for all that beer: bratwurst, burgers, pickled deviled eggs, potato salad, and giant chewy pretzels topped with mustard and horseradish or stuffed with cheese and charcuterie. 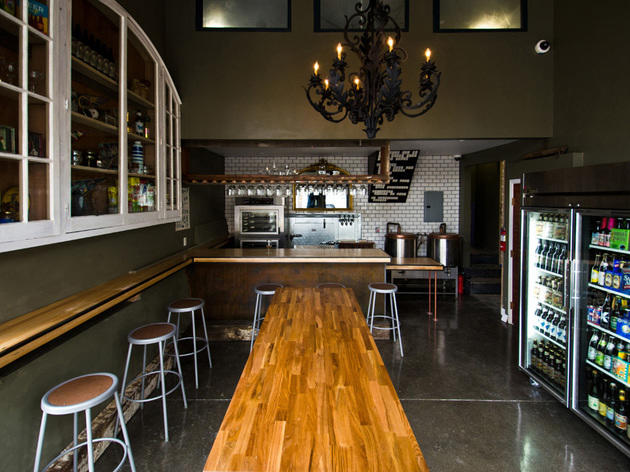 On a sunny corner of Dolores Park, this tiny Argentinian Cervecería offers a short-fingered handful of house-brewed beers along with some 100 in the bottle, and a half-dozen varieties of empanadas from local purveyor El Porteño. On a weekend afternoon, locals perch on barstools or stand in the doorway sipping the signature MateVeza IPA, made with naturally caffeinated Yerba Mate, Morpho Herbal Ale, or one of the seasonal experimental brews (cornflake cream ale, grapefruit sour ale), before heading off to catch sun in the park. 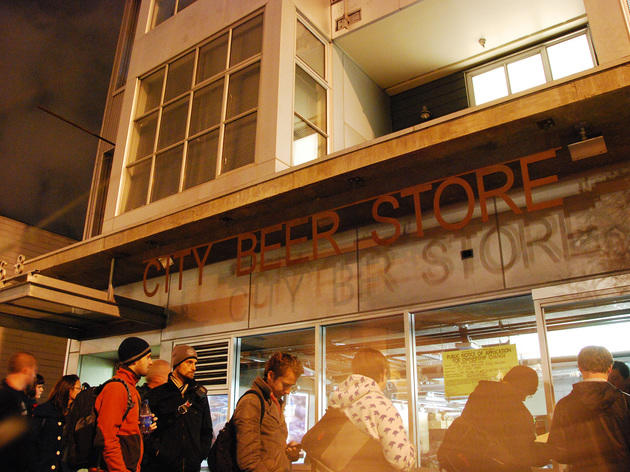 This modest storefront and beer-tasting bar consists of four tables and floor-to-ceiling refrigerators packed with more than 500-700 kinds of bottled beers and 15 rotating beers on draft. Sample something on tap while you nosh on a small plate of regional cheeses, fava bean hummus, or candied bacon caramel corn, and banter with the other beer-o-philes. When it’s time to head out, the owners encourage patrons to mix and match a six-pack to take home.

Catering to a mixed-age crowd of hipsters, sports fans, USF students, and their parents, this boisterous bilevel brewpub leans toward Belgian and fruit-infused beers. Its menu strives to complement using elements that incorporate sweet, salty and sour. Pair your Fruitfly Framboise (raspberry wheat ale) or Simon Says Persimmon Saison with barbecued pulled pork sandwiched inside Indian naan bread, alongside cucumbers, cilantro, and tzatziki sauce, and served with a side of chickpea fries. Or try a refreshing Knify-Spoony Down Under Lager with some decadent poutine—thick-cut French fries slathered in beef gravy and cheese curds. On weekends, Barrel Head draws a neighborhoody brunch crowd for baked apple pancakes and brisket hash. 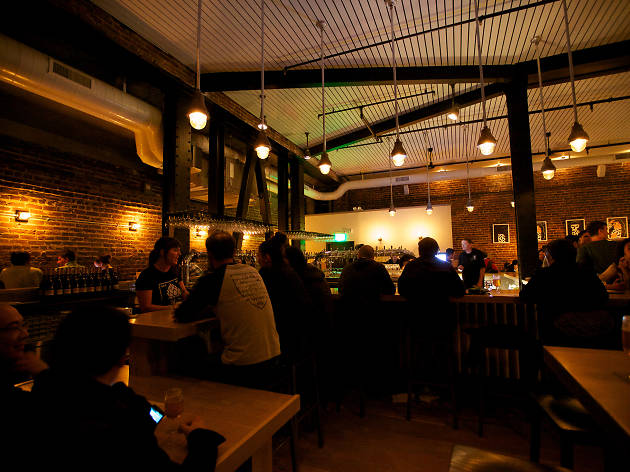 This Tenderloin beer oasis draws hops heads from all over the city. The centerpiece of the brick-walled canteen and bar is an epic 42-tap setup, augmented by a specialized bottle selection. The draft menu comfortably stretches over a wide and generally affordable range of European and domestic suds, featuring about ten of Mikkeller's house brews including IPA, pale ale and lambic. Beers are lovingly stored at precise temperatures appropriate for each style using a custom system. Mikkeller is also one of the few places in the city that serves cask-conditioned ales. To pair, a sturdy food menu features beer-friendly standbys: charcuterie, cheeses, house-made sausages and more. The spacious bar zigzags around the cavernous back area and there's seating for diners up front. 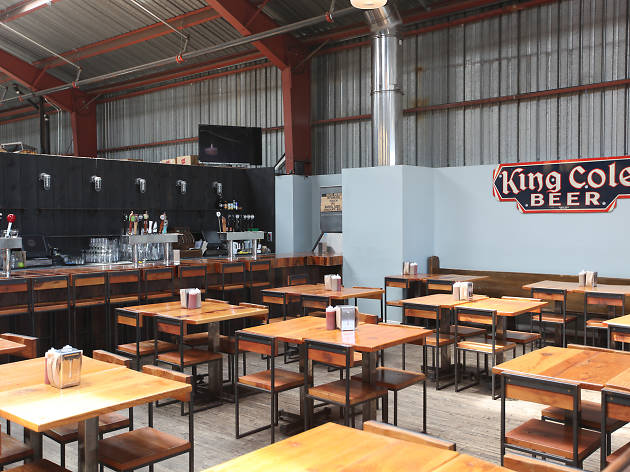 Nestled into a quiet corner of the Mission District, Southern Pacific Brewing Company offers a sun-drenched patio prime for cold pints of draught beer and tasty burgers—not to mention great people- and dog-watching opportunities. Brewmaster Andy French brings clean flavors to a wide variety of beers. The onsite bar features 21 taps and a range of styles, including porters, IPAs, Belgians, ambers and lagers. Pair the brews with robust bar food like burgers, mac and cheese, fish and chips, pizza and wings. If the weather's chilly, retreat to the bar's cavernous, warehouse-style interior. Cash only. 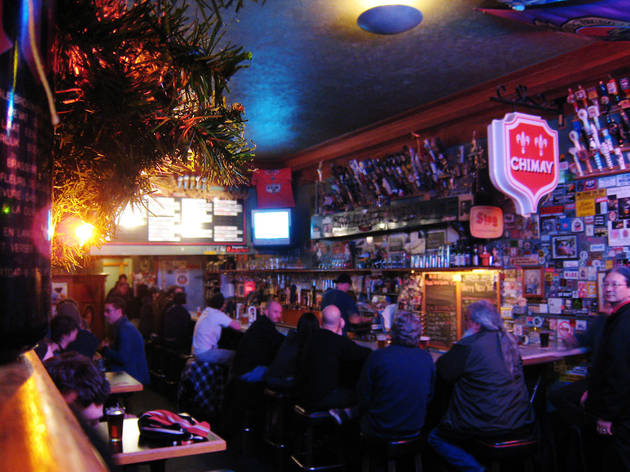 This noisy hangout is a beer drinker’s delight. A board posted on the wall shows the massive, ever-changing selection of drafts (which includes local brews and Belgian imports), while the blackboard behind the bar highlights bottled beer and non-alcoholic options. Patrons are encouraged to bring in fresh sausages from Rosamunde Sausage Grill next door. 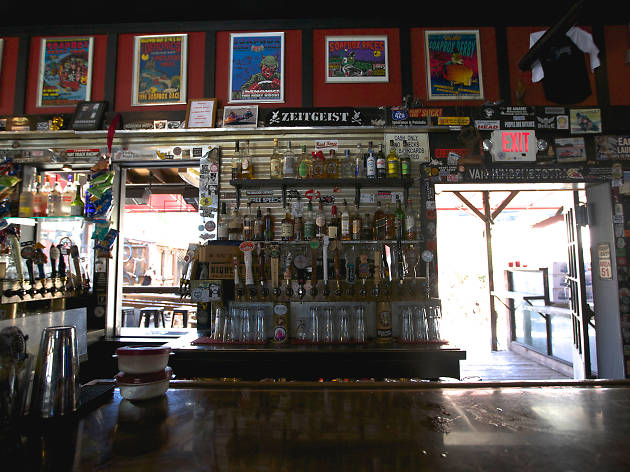 San Francisco is a chill city, and it doesn't get chiller than this outdoor spot. Sipping a beer at one of Zeitgeist's sunny picnic tables with very relaxed smokers is a definitive SF experience. The beer garden stretches across a wide, open area defined by wooden fences, but large trees provide shady spots for those who prefer to stay out of direct sun. Inside, the bar taps dispense more than 40 beers—many of them from microbreweries—available by the pint or the pitcher, and a full kitchen serves excellent renditions of simple favorites like hamburgers, bratwurst and grilled cheese. 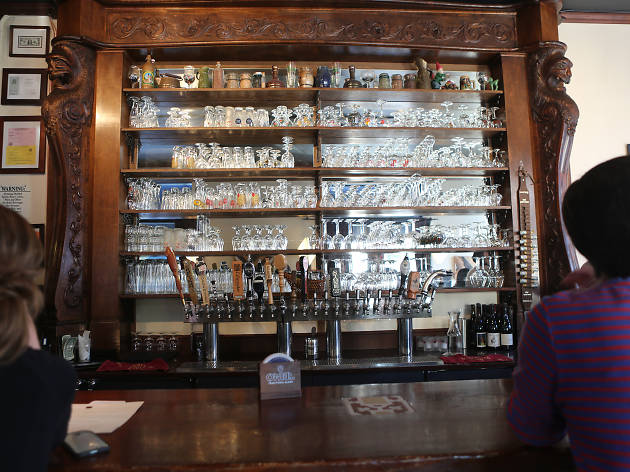 This wood-accented gastropub curates an impressive list of roughly 200 rotating beers (more than 20 draft, 180 bottled and 15 vintage pours from the cellar) that spans European and American styles and includes a large selection of local brews. Beer nerds will revel in rare suds, some costing as much as $79 for a 750ml bottle, such as the barrel-aged AleSmith Old Numbskull from San Diego. The small space is in inverse proportion to the expansive beer selection, so come early or be prepared to wait. The staff provides well-informed, if sometimes surly, drink suggestions to those who manage to secure a seat at the bar. Small groups can also snag booths along the wall.