A cool two decades into his still-precocious career, the filmmaker turns the corner into wisdom with While We’re Young

To meet writer-director Noah Baumbach in the West Village’s Bar Pitti—the restaurant he calls the best in the city—is to encounter a man unusually at ease. “I’m probably too much a creature of routine,” he says over the pop of a nearby cork. With his swept-back hair, blazer and easy corner-table demeanor, he could be confused for any of the fashionable crowd filling the small trattoria with Sunday brunch noise. But this is also Baumbach’s writing room, where he and longtime friend Wes Anderson hammered out the script for The Life Aquatic with Steve Zissou, and a site of rigatoni-scented comforts. “I was recently on a plane watching In a Lonely Place”—the 45-year-old filmmaker’s anecdotes often include title drops—“and Humphrey Bogart has a place called Paul’s or something where he goes. I was romanticizing my experiences of this place.”

While We’re Young, Baumbach’s latest comedy, also feels marked by the confident swagger of middle age and regular hangouts, though that shouldn’t be misread as a retreat from the bite of his recent movies Greenberg or Frances Ha, which both star the impulsively charming Greta Gerwig, the director’s partner, professionally and personally. (The new film doesn’t feature Gerwig and, as such, plays in a more controlled register.) Straddling the Upper West Side and a satirically scruffy Bushwick, While We’re Young introduces Josh and Cornelia (Ben Stiller and Naomi Watts, both aces), a settled pair of childless, iPad-addicted marrieds who become energized by their sudden and unexpected friendship with euphoric twentysomethings Darby and Jamie (Amanda Seyfried and Adam Driver). It’s unclear who adopts whom—a baked-in tension that’s the springboard for some deceptively sharp insights into generational envy. Baumbach was happy to discuss.

Is there a certain point when one has to start acting their age?
Yeah. Maybe that’s what my movie documents, though I don't know if that point announces itself. It's more of an everyday thing. It would be easier if it was more dramatic, like when you see therapy in movies. Characters tend to have big breakthrough moments, and I accept that because it's standing in for everything else—they're not going to show you every session. But what I'm trying to do is show how life doesn't provide those moments, so it's sort of on us to figure out when they are. It's not just age, it's also dealing with: Who am I?

Do you consider yourself a New York filmmaker?
I wouldn't label myself that. But I think when I came back to do Frances Ha—I had been living in L.A. and I shot Greenberg there—I was less modest about making a New York movie. Maybe that has something to do with what you're saying about acting my age, but I felt that [making a New York movie] was finally mine to do, in a way. Whereas before, I might have been intimidated by that. But I was shooting in New York again, I was shooting in black-and-white, which changed the way I looked at things, and I brought back a lot of the New York of my childhood.

Does the past loom large in your head?
There's something about all my recent movies—not necessarily in the story or anything, but they're all modeled on the movies that I saw when I was a teenager and was getting into films. Frances Ha was modeled on discovering the French New Wave, but also Jim Jarmusch and Spike Lee, stuff that was shot in New York, sometimes in black-and-white. While We're Young was based on the grown-up studio movies of the '80s. It was Tootsie and Working Girl and Broadcast News: studio movies that were broad in certain ways, but also very much about character and made for adults. And they were hilarious, too—they were really funny. Obviously Woody Allen as well. I could watch any New York movie that takes place in the '80s or before, because I just love watching this city. I get very moved by it. Just seeing what a street corner looked like. And if the movie's any good, that's a plus.

Are you a nostalgic person?
I don't think I'm really nostalgic. I get a big emotional hit out of seeing the seasons change or if I smell a certain kind of petrol coming out of a car—it's the madeleine thing, I guess. I feel like a lot of my creativity is born out of that. All the movies I've made feel like they’re somehow speaking to my experience as a kid, whether they’re about it or not.

While We’re Young takes a comic swipe at millennials, but it’s also sweet and sympathetic, not harsh. Still, I’m reminded of a line from Greenberg: “I’m freaked out by you kids.” What is it about this generation that fascinates you?
[Laughs] I don’t think of it honestly as being about millennials, I really don't. I think of it as a kind of dramatic representation of having to look backward and look forward, drawing inspiration from the people who are younger that you, while also coming to terms with how old you actually are.

You’re equally tough on Generation X, as you have been over several films. Do we worry too much?
I do think there's a self-consciousness to Ben's character in While We're Young, to the point of inertia. And certainly, that kind of self-consciousness is something that a lot of characters I've written have some version of.

Do you go to Bushwick? Or are you just making Bushwick jokes?
[Laughs] I mean, I've gone there. I have friends that live in Brooklyn. It's very different from the Brooklyn that I grew up in. I have a complicated relationship with Brooklyn, as anybody does with the place they grew up, in that I love it but I also wanted to get out of it.

Is aging on your mind?
It's certainly on my mind. But I like being the age I am [45]. For all the things I wish I was better at—and there are things I still want to be better at—I think a lot of good things come with middle age. Creatively, I feel good. I feel excited and motivated. In a lot of ways, I feel like Jamie. I have that eye-of-the-tiger, I'll-devour-everybody kind of feeling these days. For me, it comes from middle age. For other people, it might come in their 20s.

Critics are calling While We’re Young your Woody Allen film. Are you aware of that?
Actually, I don't read anything, so I don't know. Maybe eventually, if I'm told to read something, I'll read it like two years later. I don't know. How do they mean it? Positively? People thought Frances Ha felt like Woody Allen, too. I’ve heard that my whole career, to some degree. I always take it as a compliment because, as a kid in Midwood High School in Brooklyn, he was the single biggest pop-culture influence on me.

Seriously, even with your mom being a former film critic [The Village Voice’s Georgia Brown], you don’t read any of your reviews?
With the Internet, it's hard to just read one thing. You always end up on the Daily Mail, and you know it's time to shut down.

You’re not on Twitter either.
No. I would pore over, like, one tweet. It's hard for me to engage in a disposable medium that way. It would be like crack for me but where I would be taking six hours to get it the right way in the pipe. And then it would defeat the purpose. With the last hurricane, when our lights went out, Greta went on Twitter to find out what was going on. It’s good for that.

How do you balance your connection with Greta? Do you feel a need to preserve a sense of yourself, the filmmaker, versus the couple?
I don't think about it like that. I love making movies with her, and we'll do more. They feel equally mine, even though they're so much hers, too. I don't think of them any differently, really.

Does it get tired hearing that you were reinvigorated by her?
Not if you don't read it! [Laughs] People's speculations…they can attribute it to whatever. It's probably a million things.

Is it a problem to have all of your film references in your head, or is that issue overrated?
It's not a problem. Maybe when I was younger, it was more of a problem. Now it's all inside me, so it's not a problem. I think when I started—when I made Kicking and Screaming—it was almost too many ideas, too many things I wanted to do and be. And it was a little overwhelming. But now I'm more comfortable. I've made some movies now, so I'm comfortable to the degree that one gets comfortable.

Is this a long game for you?
Yeah, I hope so. [Smiles]

Read our review of While We're Young 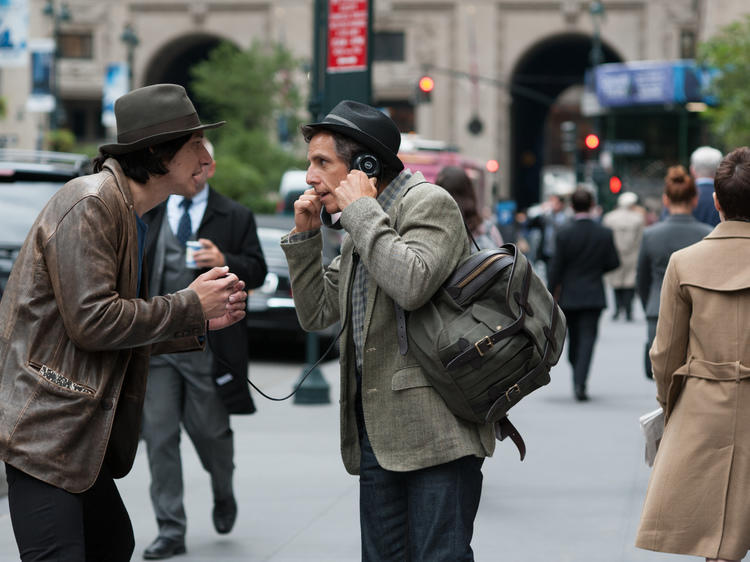