Trust us, this is not your chain kimbap store. From hot bubbling stews served with steaming, sticky rice to the best cold noodles to more traditional Korean dishes like samgaetyang (Korean-style chicken soup), these Korean restaurants are the ones that make ahjusshis confess their mothers aren't the best cooks in town. Bring your Korean friends and their parents, even!

Where to find the best Korean food 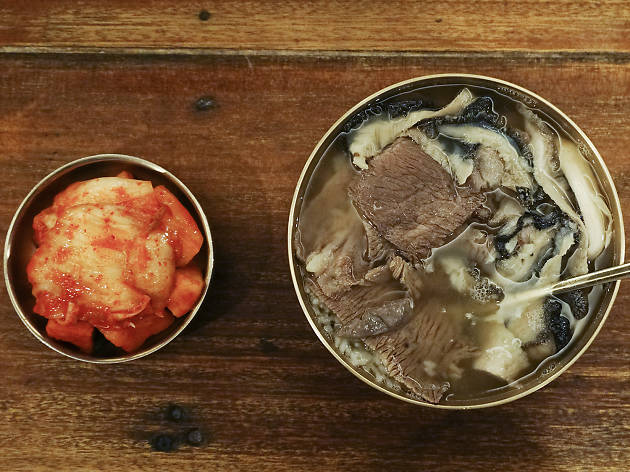 There's something special about old traditions, and even more so when they're maintained with sincerity. Step into Hadongkwan, where you can taste and see that special something. Initially located on a back alley near Cheonggye Stream 70 years ago, the original restaurant was demolished during a period of redevelopment. But the owner kept the original wooden doors and wooden tables and continues to use them in his relocated Myeongdong location. He made this gensture to console long-time customers who bemoaned the loss of a landmark. Their signature dish is gomtang (simmered beef soup with rice), a comforting meal one tends to crave when feeling exhausted, physically or mentally. A plentiful amount of rice and pieces of beef with soup made from hanwoo (Korean beef) stock are served in traditional Korean bronzeware bowls. We suggest adding a handful of minced green onions to your soup. Before you gulp down everything, don’t forget to ask for "ggak-guk." At Hadongkwan, ggak-guk is a nickname for the juice from ggakdugi (diced radish kimchi). The piquant and sour flavors of ggak-guk add new depths to your gomtang. Hadongkwan normally runs out of ingredients by 4:30pm, so remember to stop by early get your fill of this savory, nutritious dish. 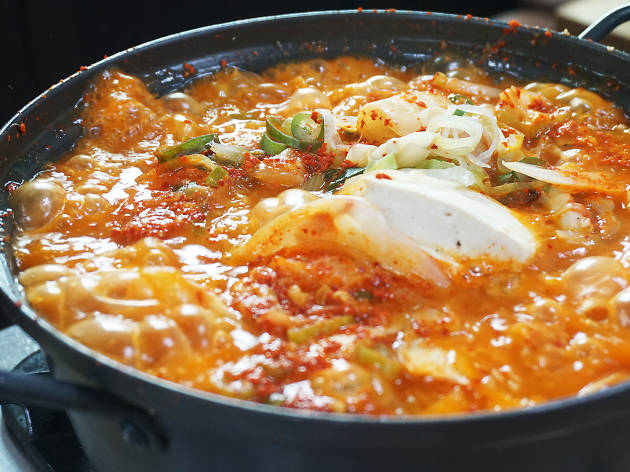 You can guarantee yourself a decent pot of kimchi jjigae, or kimchi stew, if you have decent kimchi to put in the stew. But if you’re out to create really good kimchi jjigae, there’s no limit to how far you can go. Eunjujeong is a restaurant that kimchi jjigae aficionados revere as sacred. It’s fairly difficult to find, tucked away as though hidden in the alleys of Bangsan Market. Despite this there’s a long line of patrons waiting for a taste of the savory stew. Eunjujeong kimchi jjigae has an addictive quality, and once you’ve tasted it you can never go back. It’s easy to see why the owner talks of first-time patrons and their return—they’re always bringing in some new patron. It seems 30 years of serving stew in the same location paid off; somehow Eunjujeong seems to have hit upon the optimum ratio of sweet to sour in its broth. The thick slabs of meat certainly don’t hurt, and the generous portions of vegetables provided to wrap the meat in aren’t unwelcome, either. At lunchtime the restaurant does just kimchijjigae; at dinnertime the star is samgyeopsal (grilled pork belly), with kimchi jjigae as the sidekick. 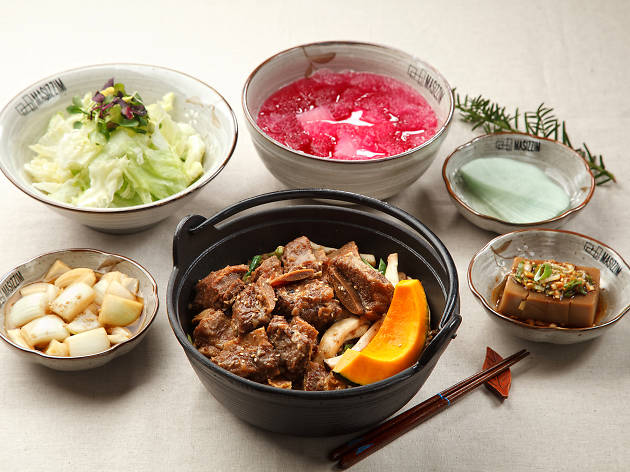 There are times when you want ribs and drinks with your friends, and there are times when you're craving a little galbi-jjim, braised beef ribs, between work meetings. Masizzim is the place for that latter time. Working from the owner’s mother’s own recipe of galbi-jjim, Masizzim has perfected an inexpensive recipe without all the mess usually associated with eating ribs. The ingredients may not be top notch quality but Masizzim is all about ease and accessibility, creating a no-frills dish that anyone can eat. Unlike many Korean restaurants which require you to order at least two servings of the dish, Masizzim lets you order single servings (good news for all you lonely hearts and busy people out there). Plus, the main menu items of pork and beef ribs are priced under 10,000 KRW during lunch hours. Masizzim's modern interior and simple and neat presentation is especially appealing to daintier, pickier eaters who prefer to keep their galbi-jjim meals small and mess-free. 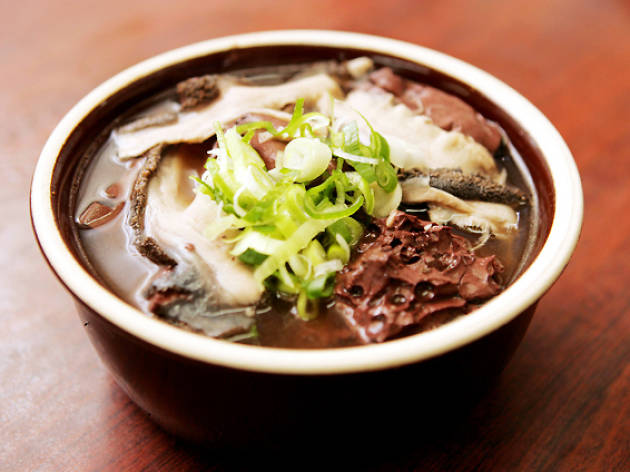 The history of hangover stews in the Republic of Korea began in 1937 with the opening of Cheongjinok. The clean-tasting, Seoul-style blood stew for hangovers served at this establishment has been consistently beloved by drinkers for many years. Blood stew is, as the name implies, a soup made by stewing the blood of a cow with the broth. A soup bone is stewed for a long time, and then added to that are generous chunks of radish, bean sprouts, blood, then finally doenjang (soybean paste) for flavor before the entire stew is boiled again. The hangover stew of Cheongjinok is faithful to the fundamentals. The broth, with the reddish brown color unique to blood stew, is characterized by the refreshing flavor of the bean sprout and dried radish stems, and the subtle sweetness that comes from letting quality meat stew for a long time. Because the soup isn’t boiled outright for flavor, but rather allowed to simmer at the appropriate temperature, there’s a complexity to the broth that you can taste. Cheongjinok also makes a great one-stop shop for drinking: after drinking some soju with cooked beef intestines, you can preemptively alleviate the hangover on the spot with hangover stew. 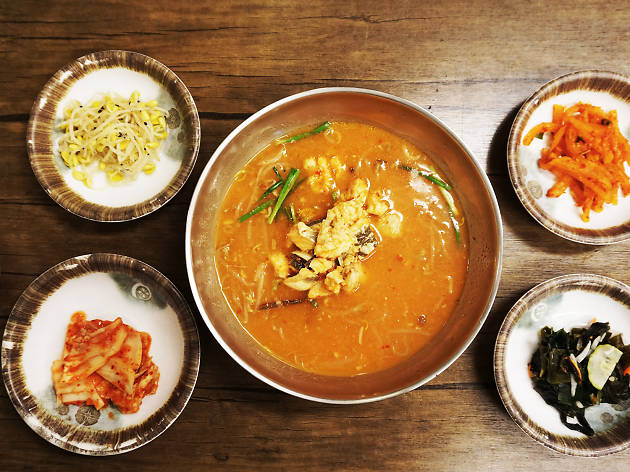 Even the word “Jangeotang" (eel stew), recalls something greasy, fishy and pungent. But you shouldn’t judge before you eat. The taste of jangeotang is so memorable that it might be said that you can divide your life into two parts—before your first bowl of jangeotang, and after. There’s no fishy taste, only layers of flavor, both spicy and refreshing. The soup is weighty and hearty. In the stew you taste the bone, the flesh and the spirit of the jangeo (eel), a food widely acknowledged to be good for health and vigor, and wonder what it is they added and how they cooked it for a taste like that. This is one of those restaurants you hestitate to share lest it become too crowded. It’s not just the jangeotang. The place is also famous for its delicious seodae hoe (flatfish sashimi). The seodae is a type of fish only found off the shores of Yeosu and the South Sea. It’s enjoyed sweet and sour and refreshing, with fresh vegetables, vinegar of fermented makgeolli (rice ale), and red pepper paste. Neither jangeotang nor seodae hoe are foods that are easy to find in Seoul—all the more reason that Yeosu Odongdo is such a treasure. The jolly and openhearted proprietor makes the trip to Yeosu each week to transport the ingredients himself; it’s a thrifty and honest business they run. And to anyone who asks, the owner is only too willing to open up about ingredients and foods. 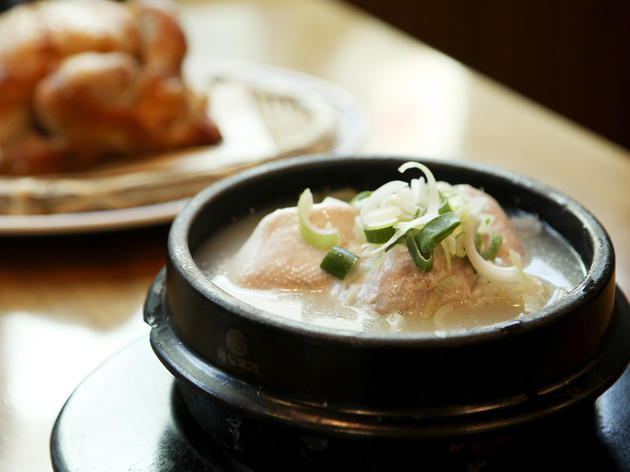 Patrons exhausted from the heat, wanting to regain energy lost from the torrid weather, lining up outside this samgyetang (ginseng chicken stew) restaurant is a familiar sight every summer. It’s questionable whether a single hearty meal can do much for one’s energy, but if that meal is samgyetang—then, perhaps, that’s another story. Korea Samgyetang opened its doors in 1960 and continues to thrive today, as Korea’s first samgyetang restaurant. The meat of the seven-week old rooster (one raised for breeding) used is firm, with a pleasantly chewy texture, and the bird is stuffed with glutinous rice, four year-old Geumsan ginseng, dates from Gyeongsan and various traditional Korean medicinal ingredients. It’s all placed in an iron pot and simmered down. And once you consume the meat, chewy and yet soft enough for the bones to slip right out, accompanied by a bowl of the savory broth, you can almost hear all the organs in your body shout, “Ah, that’s refreshing, ah that’s warm!” At this point we can’t even call it food—this is a drug.

Read review
Show more
Get us in your inbox