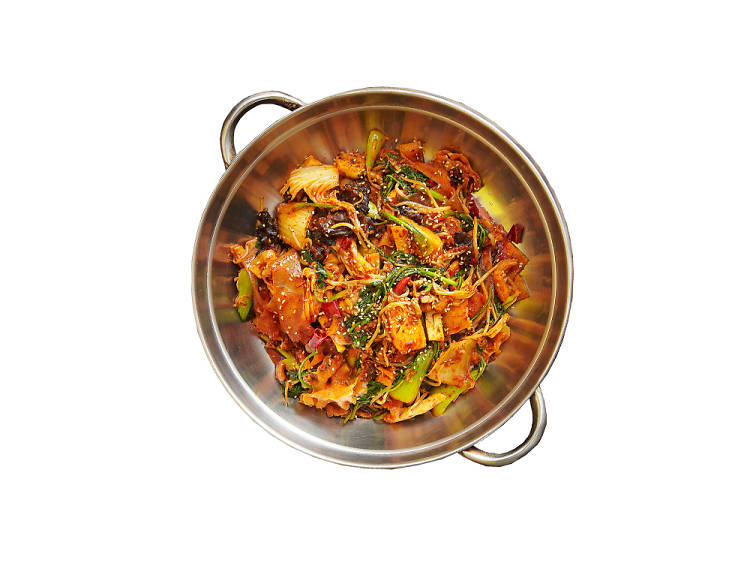 Mala, a numbingly fiery and oily sauce made of Sichuanese peppercorns, chili peppers and various spices, is the base ingredient for some of the most popular dishes in Sichuan cuisine. In Korea, the best known version of mala is probably mala huo guo (a shabu shabu-style Sichuanese hot pot dish). But there are more mala-based treats to discover. Its lesser known cousin mala xiang guo, made of stir fried vegetables, meat and seafood, does not feature a broth like mala huo guo or mala tang (vegetables, meat and seafood on skewers cooked in a broth), but it definitely tastes just as strong. Located near Geondae, this eatery opened in 2013 and specializes in… well, mala xiang guo. Pick your ingredients from a selection of more than 40 different choices, including green bean sprouts, mushrooms, cabbage, coriander, chou doufu (stinky tofu), beef tripe and veins. Then decide how spicy you want it (low, medium, very). The spices used in the dish have a very strong and fiery kick but the Chinese herb-infused oil gives the dish a clean finish. The chewy veins are especially delicious. Enjoying it with hua juan (steamed scallion buns) is also a good idea as it will make your food less spicy and extra savory.
Read more 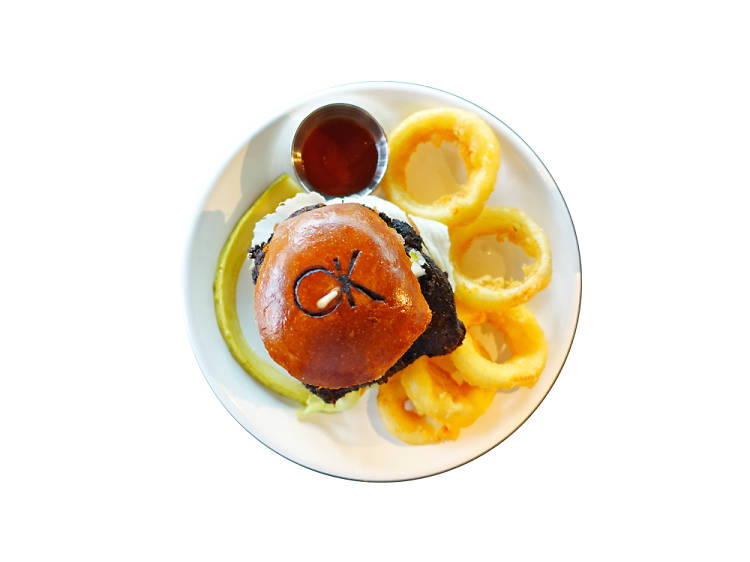 Being featured on food-related TV shows such as Wednesday Food Talk and Tasty Road, OK Burger has recently become even more famous. The heart of their new menu, the Spicy Smoked Jerk Burger, features one of Jamaica’s favorite dishes—jerk chicken (smoked chicken marinated with hot spices). Their jerk chicken is not too spicy but combined with the bread and sauces it’s hotter than you expect. The salsa is this burger’s secret ingredient. The pineapple salsa, the jerk chicken, which has been smoked for six hours, and the spicy mayo are the perfect combo—and yes, it’s spicy. This burger is not as fiery as some other burgers you might encounter, but the savory Spicy Smoked Jerk Chicken Burger has a well-balanced flavor. It’s only available at OK Burger's Cheonggyecheon branch.
Read more
Advertising 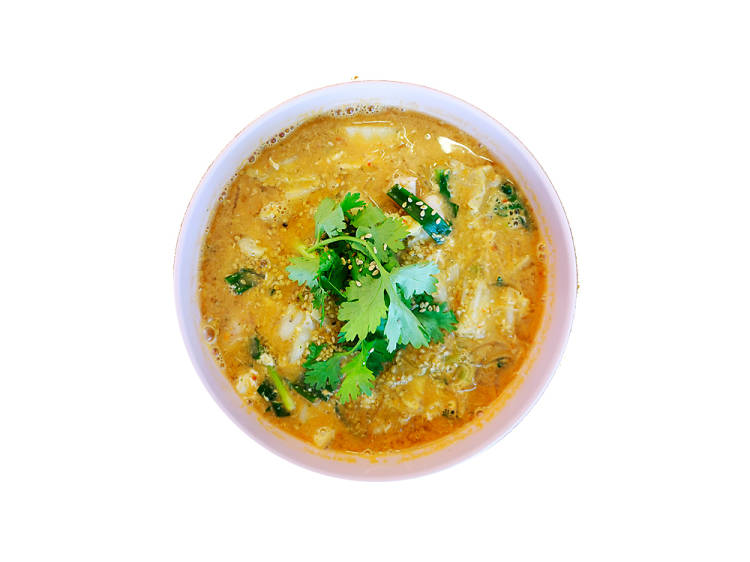 Even those familiar with tom yum goong soup are said to have a hard time with this thin vermicelli noodle soup seasoned with Thai style suki yaki sauce. Suki nam is a popular dish in Thailand, but is a rarity in Seoul. Fortunately, you can try it at Mum Aroy, a Thai restaurant located near Sangsu Station. As soon as the plastic bowl with suki nam is placed on the table, its fragrant spices will make your nose tingle. It’s spicier and stronger than tom yum goong. Thai cuisine and coriander are inseparable, especially when it comes to spicy dishes, and it’s also used extensively in sauces. If you are a lover of pungent spices and coriander, you’ll love suki nam. As one of the most famous Thai restaurants in Seoul, Mum Aroy brings noodles and spices all the way from Thailand and they make most of their sauces in-house.
Read more 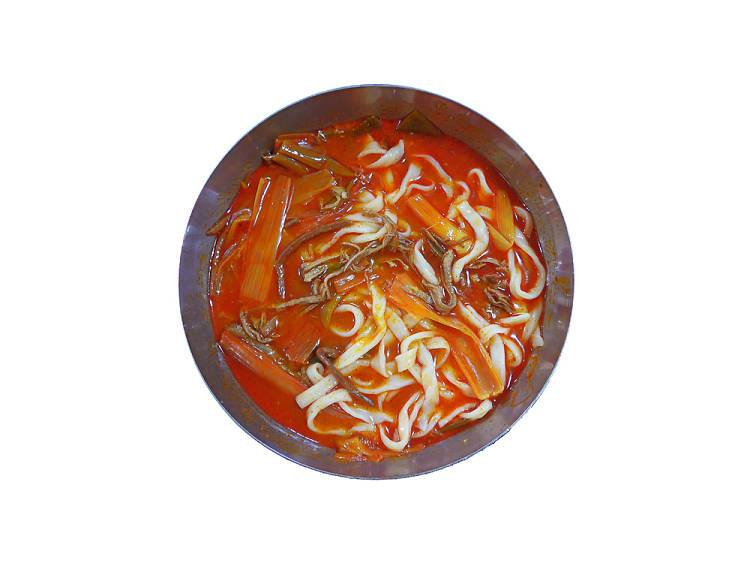 Located under an overpass near Samgakji Station, this popular restaurant with very long lines hawks its well-known yukgaejang kalguksu noodle soup, also known as yukkal. Yukkal, which is also the name of this restaurant, is a combination of spicy yukgaejang soup and kalguksu noodles. Broth made with beef shank, hand-torn brisket and green onions are all you can see in this seemingly ordinary dish, but this place has been serving this humble dish for almost 30 years. When you order your yukkal, you’ll be served a bowl of yukgaejang and kalguksu boiled in beef broth, separately. Add the noodles to the broth little by little to keep them chewier and fresher for a longer time. Compared to other restaurants, their yukgaejang soup has a deeper and oilier taste to it. Its thick, spicy taste will linger in your mouth for quite a while. If it’s setting your mouth on fire, dilute it with some more beef broth. You can order yukgaejang if you want to have both kalguksu and rice.
Read more
Advertising 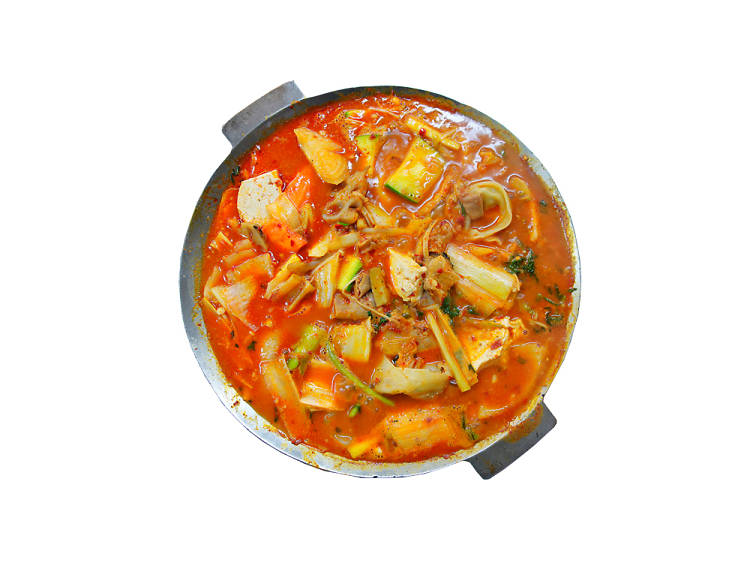 As soon as you set foot inside, you can feel this restaurant’s 50 years of history with its interior design that looks like something out of the last century. This restaurant’s spicy offering is gobchang jeongol, a tripe stew. Mushrooms, tofu, lotus roots, dumplings, pumpkin, beef tripe and rumen (the first part of a cow’s stomach) are served in a large pot. The tripe and rumen are separately boiled and marinated in a secret concoction of spices, which is very important in seasoning the stew as they do not salt the meat. They add beef broth and then boil the ingredients all together. This zesty, savory stew is great as a stand-alone meal and as a hangover cure (or the opposite and enjoyed with some adult beverages). It tastes even better during Seoul’s summer monsoon season. Their Pyongan Province-style beef stew, eobok jaengban (buckwheat noodles in broth with beef and vegetables on top, served in a brass pot) steamed galbi and gejang (crabs marinated in soy sauce) are also popular.
Read more 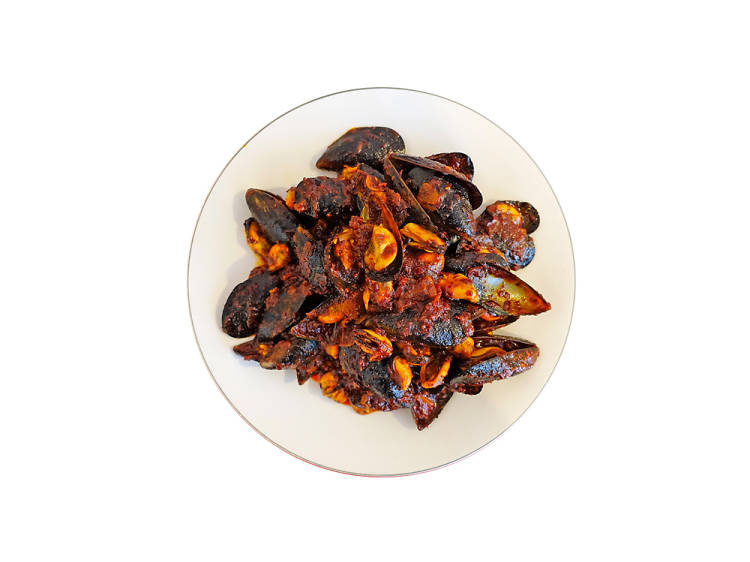 Mussels with black beans and chili at Wan Chai

If you have a craving for almost painfully piquant dishes, try Wan Chai. Named after the district in northern Hong Kong, this joint has an extremely spicy mussel dish waiting for you. Foodies with a love for fiery cuisines do not want to miss out on this. Wan Chai developed this mussels with black beans and chili dish that’s seasoned with Sichuan peppers, Cheongyang red peppers and pepperoncino rosso. They stir fry the mussels and seasonings at a very high temperature and serve it with a sticky rice porridge that helps to ease the stomach pain that results from this insanely hot dish. Their black-red seasoning has a strong taste that almost covers the natural taste of the mussels.
Read more
Show more