The other side of SNU’s campus

With buildings spread out over its vast campus, the prestigious Seoul National University is quiet and peaceful. As one of the most competitive schools to get into, the students here are notoriously studious—so much so that the stereotype is that they don’t know how to have fun. However, once you see their go-to party district, Sharosu-gil, it’s likely you won’t believe this to be true. Alive with bustling bars and pubs every evening, Sharosu-gil attracts students and businessmen alike. The name parodies the posh Garosu-gil and the suffix is a nod to the Seoul National University main gate said to resemble the character “샤” (phonetically “sha”). Just a couple years ago, this street was a mainly residential area and the remnants of that still show: dry cleaners and tailor shops with retro signs, along with butchers and street food stalls reminiscent of traditional Korean marketplaces. However, these stores now have trendy, young venues as neighbors. A plastic covered pocha selling tteokbokki stands alongside a shiny new burger place boasting authentic American cuisine. Foreign dishes from South America to France have made their way here in places that offer cozy and friendly atmospheres. One-fifth of the length of Garosugil, the neighborhood is rapidly developing and it’s an exciting time to see it form into an area that is cheaper than Itaewon and quieter than Hongdae. This weekend, forget those spots and stop by Sharosu-gil to let loose alongside some of Korea’s most esteemed students. 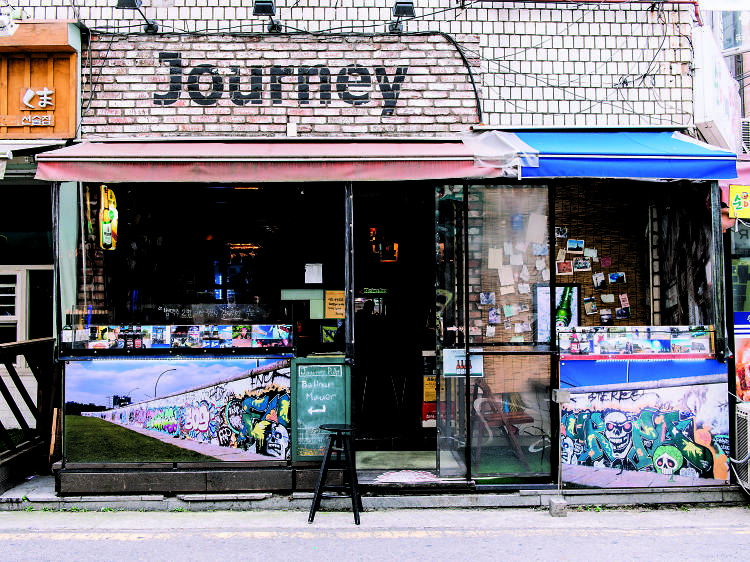 Journey was opened on a whim in 2012 by two friends who met traveling in Australia. They were drawn to the area because of the relatively cheap rent and its proximity to a university. Others quickly caught on and the neighborhood became dotted with unique restaurants with their own flavors. But Journey’s kept its place in Sharosu-gil with its simple but delicious burgers as well as a large selection of beers and wines from around the world. If you order two bottles of beer you’ll get an order of fries on the house, and with one bottle of wine, you’ll get a cheese platter.
Read more 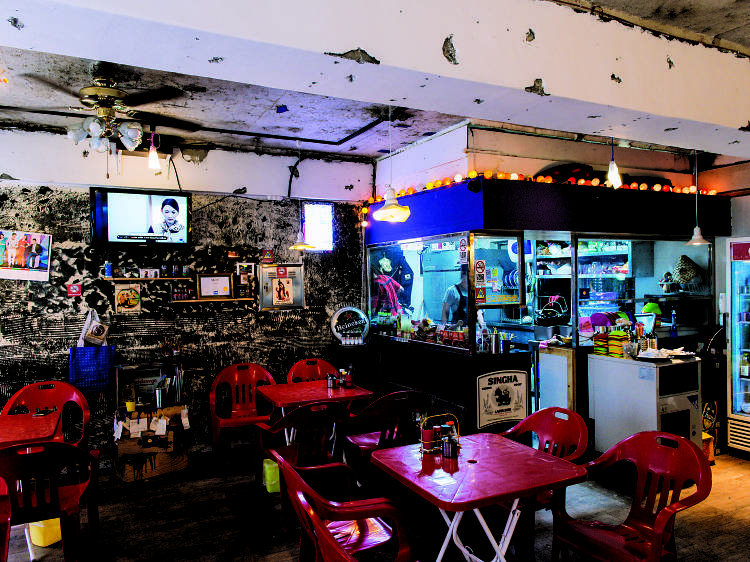 The Bangkok Night Market in Sharosu-gil takes its inspiration from the one on the crowded Khaosan Road, and you won’t be disappointed. A long-time favorite of Sharosu-gil regulars, Bangkok Night Market has all the elements of a local Thai market, from the sign to small interior décor. Here you can taste the authentic flavor of original Thai food. Signature dishes include the goong pad pong curry (sweet yellow curry with sautéed shrimp), as well as tom yang soup and pad thai. You’ll be able to enjoy these dishes at reasonable prices, but be warned that the restaurant doesn’t accept reservations and there aren’t tables set up for parties of over four.
Read more
Advertising 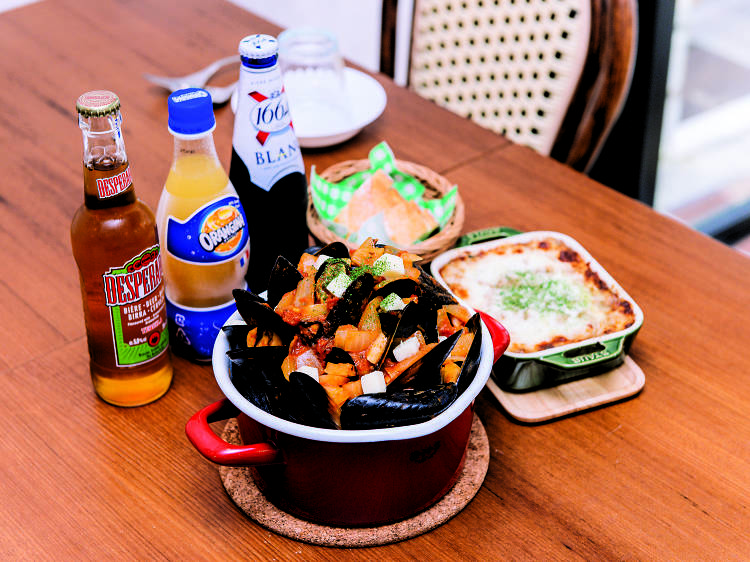 While I do love my soju with mussel soup at a pocha, Moules française & Frites is my go-to place for white wine and warm Belgium moules when I became nostalgic about my travels in Europe. The owner’s experiences in France are evident in the food. The most sought-after dishes are the mussels in tomato sauce and the gratin dauphinois. Wash these dishes down with a French beer, such as a Kronenbourg 1664, or a shot of soju. At the end, don’t forget to order noodles, a specialty at this restaurant that you can add to your leftover soup broth.
Read more 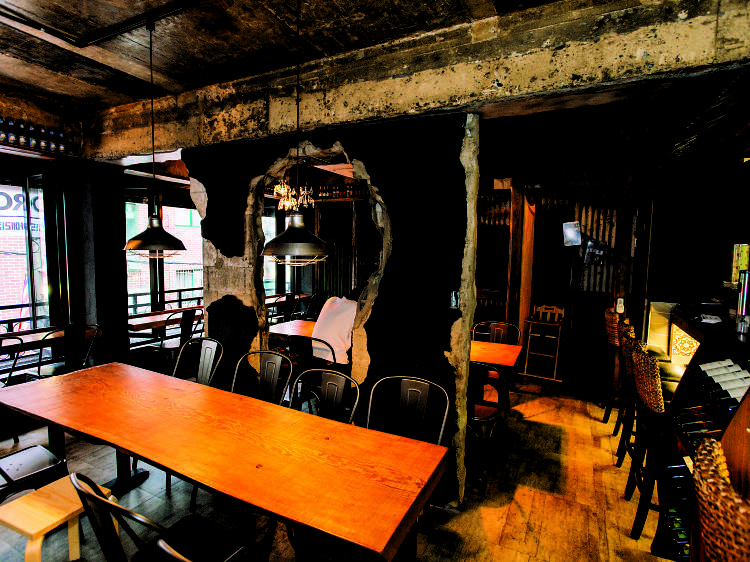 Driving from Chicago to L.A. on Route 66, the owner of this restaurant stopped by a gas station and was pleasantly surprised to discover how comfortably so many different cultures coexisted in one space. He wanted to import this type of atmosphere to his restaurant and thus named it after the Main Street of America. Route 66 sells American-style Italian food, including spaghetti aglio e olio with truffle oil and jambalaya, the so-called American risotto, as well as more traditional American dishes, such as meatloaf and roast beef. It’s open until two o’clock in the morning, welcome news for those who’ve been out at the bars and have the munchies.
Read more
Advertising 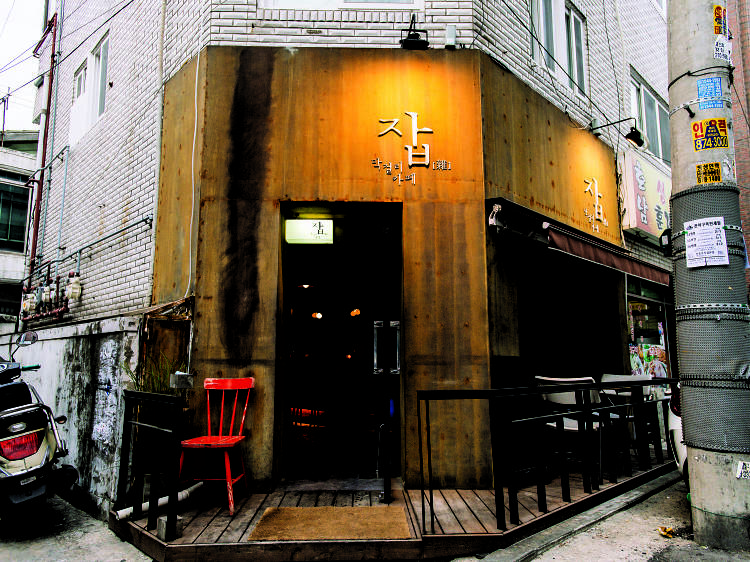 It’s not uncommon to find supermarkets in old neighborhoods selling not only groceries but also snacks and beer. At Job, you can taste snacks specially imported from a supermarket in Jeonju. What’s more, they also import the best makgeolli from around the nation, including the “lightning sound” makgeolli from Wanju in north Jeolla-do (which is supposed to be smoother than wine down your throat) and so-called “art makgeolli” from Jincheon in Chungheongbuk-do, which is famous due to being featured in a well-known comic book series called Sikgaek. Get all the drinks and eats that the peninsula has to offer at this one spot.
Read more
Show more 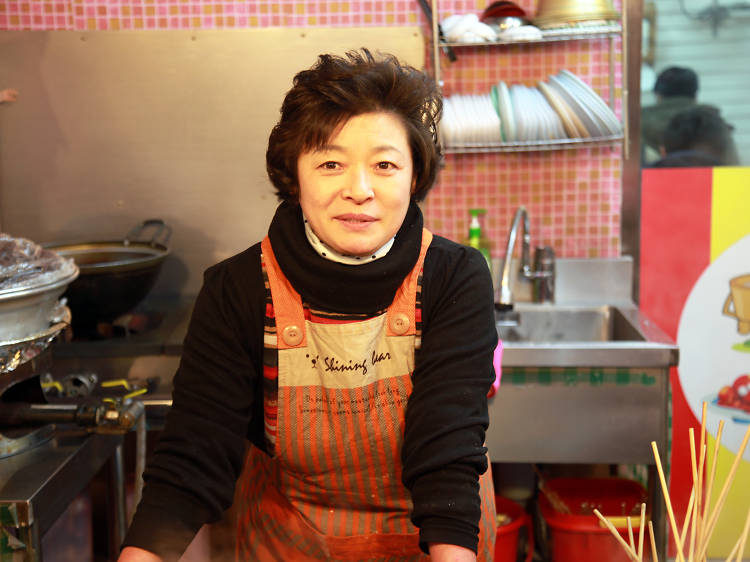 “I work at Ottogi Bunsik in Nakseongdae Market on Sharosu-gil. This street used to be for residents only, and residents still come to the market often, but now thanks to shops with more youthful atmospheres and a wider variety of food options, the amount of younger customers is growing. I think the neighborhood is becoming more vibrant.” 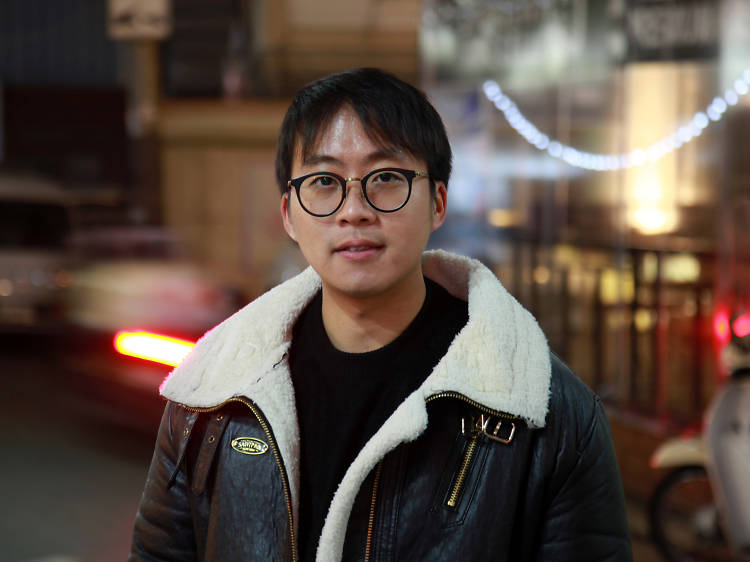 “To be honest, Sharosu-gil is quite far from Seoul National—about 20 to 30 minutes. So it’s easier to come after classes at night for a drink with friends. The places here usually don’t open until night. I used to go to Sinchon or Hongdae, but now it’s easy to get a variety of food at affordable prices nearby, so I come here more often. New shops are steadily turning up one by one and I can’t wait until all the streets of sharosu-gil are brightly lit”