Street food is a national treasure here in Sri Lanka. The fondness and love we put into making food with recipes that have been passed down generation after generation, has in no small way affected the very fabric of our every day lives. So next time you are in our neck of the woods and you’re looking for something good to eat… here are seven tasty street food treats, you don’t want to miss out on.

The King of Sri Lankan street food, Kothu in theory seems like an easy enough dish to make but people rarely make it at home. Instead Kothu can be bought at anyone of the multitude of restaurants that has to offer. The dish consists of Godambha rotti, vegetables, egg or meat and some spices. It is prepared on a hot cooking surface with two rectangular knives chopping the roti and accompaniments up into small pieces before it is served piping hot. Kothu is usually accompanied with sauce to put over it like Masala sauce.

Acharu is a very fond memory for every Sri Lankan who has the tangy, sweet taste of it etched into their minds thanks to their childhood. What the dish is un ripe fruit pickled in a mixture of vinegar, sugar, salt and some chili powder. Often fruits used for Acharu are mango, pineapple and ambarella but it is also made using olives.

Wade is a staple in any Sri Lankan street food connoisseur’s pantry. This savory doughnut type morsel is soft and doughy on the inside but crispy on the outside often times with onion and chili mixed into the batters before the fritters are fired to brown perfection. Often Uludu is eaten with coconut chutney that gives it an extra kick.

A distant cousin of Uludu Wade, Parippu wade is made out of crunchy lentils that have been deep friend in almost the identical manner as Uludu Wade. However, while the former is soft, Parippu Wade is much crispier and makes a distinct noise when bitten into. It has a taste all to its own and is quite addictive.

Made from the humble cassava, Manioc chips have been around in Sri Lanka for quite sometime. The preparation is simple but the taste is so good, we’d still make it even if it were the hardest thing in the world to make. All you have to do is cut the chips into thin slices then deep dry until golden brown add some salt and chili and you have yourself a satisfying snack that will keep you munching for hours. 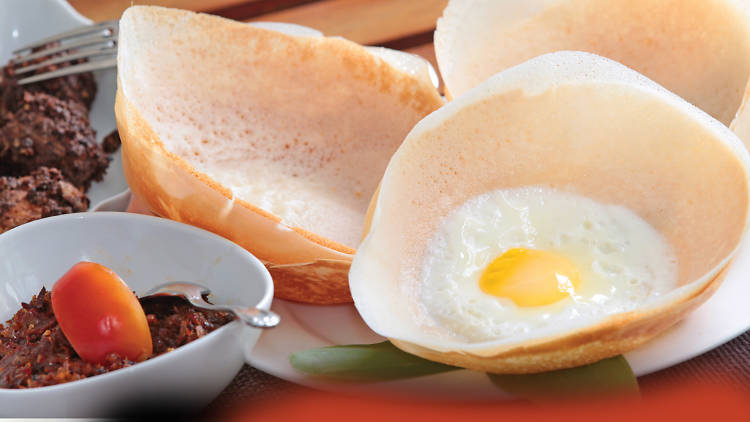 Although there is no good time to indulge in street food most are consumed during the wee hours of the night. Not so with egg hoppers, although eaten at any time of the day for any meal this dish is most often served in the morning for breakfast. It is basically the Sri Lankan version of thin pancakes with crispy edges. Traditionally an egg is cracked over the bowl shaped pancake until it cooks. Often the dish is served with Lunu Miris – a sambol of onions, chili, lemon juice and salt.

The subject of short Eats in Sri Lanka could inspire a library of cookery books. Eaten anytime and at all times in bakeries, restaurants and humble food stall, short eats are so in demand that they are found anywhere in the country and are usually freshly made. From crisp fried crumbed rolls (Chinese rolls) to buns stuffed with fish. The range of Sri Lankan short eats is vast and extensive. Whenever big meals are too much to think about, order a plate of short eats and let your trouble melt away.