Japan’s repertoire of alcohol spans traditional offerings like sake and shochu as well as more recent additions like craft beer, whisky and gin. But local libations don’t stop there, and neither should you, with Japan’s natural wine, rum and even absinthe just waiting to be discovered. Local producers have a knack for adopting foreign concepts and putting a Japanese spin on them – like using rice as a base grain, and botanical infusions such as yuzu and sansho pepper. Here's some under-the-radar Japanese booze you should get to know.

RECOMMENDED: The best bottle shops and liquor stores in Tokyo 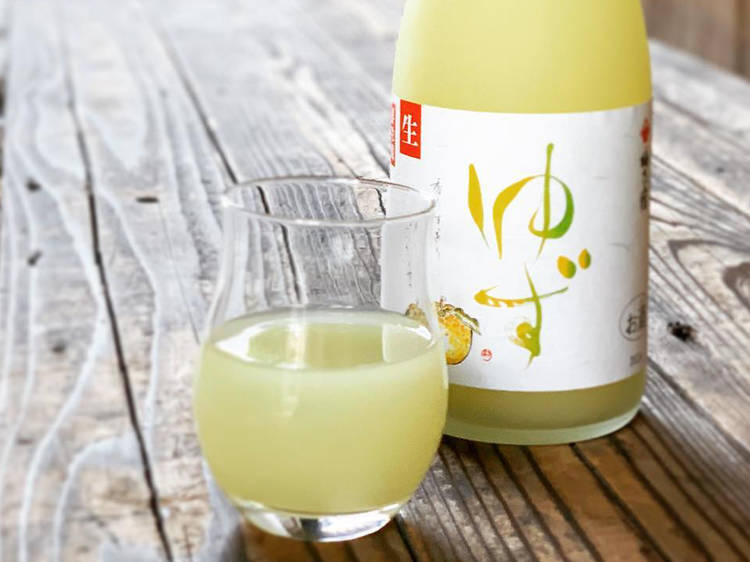 Japan’s answer to limoncello, this spirit is made with local yuzu, a citrus that tastes like a mix of lime, grapefruit and orange, but with a herbal edge. In winter, just after yuzu season, yuzushu is brewed using a base that’s typically made of shochu or sake, steeped with yuzu peel and sugar, then aged for six months to a year. We love the yuzushu by Umenoyado brewery (pictured) in Nara prefecture, which is smooth and tangy. Try it on the rocks or with sparkling water – it’s especially good as a pre-dinner aperitif. 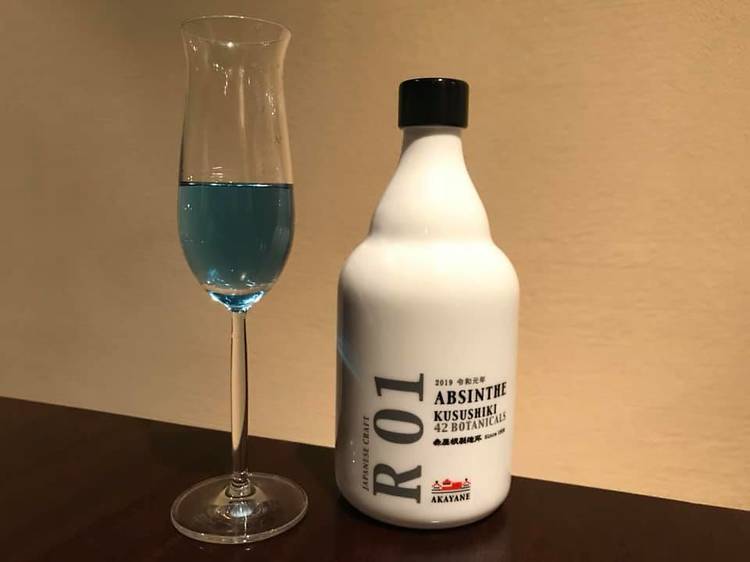 Absinthe, a distilled liquor typically green in colour, infused with wormwood, anise, sweet fennel and other botanicals, is generally associated with 19th-century Parisian artists. While this spirit is not common in Japan, it sure is on the rise. The most notable varieties are the absinthes made by Tatsumi in Gifu prefecture and Akayane Abssan Kusushiki (pictured), which is produced by Sata Soji Shoten.

The word 'kusushiki' in the latter means ‘mysterious’ in Japanese and refers to the enduring enigma of absinthe. This brand of absinthe is blue rather than green, thanks to the addition of butterfly pea extract, which turns a soft purple when you mix the drink with water and lemon juice. 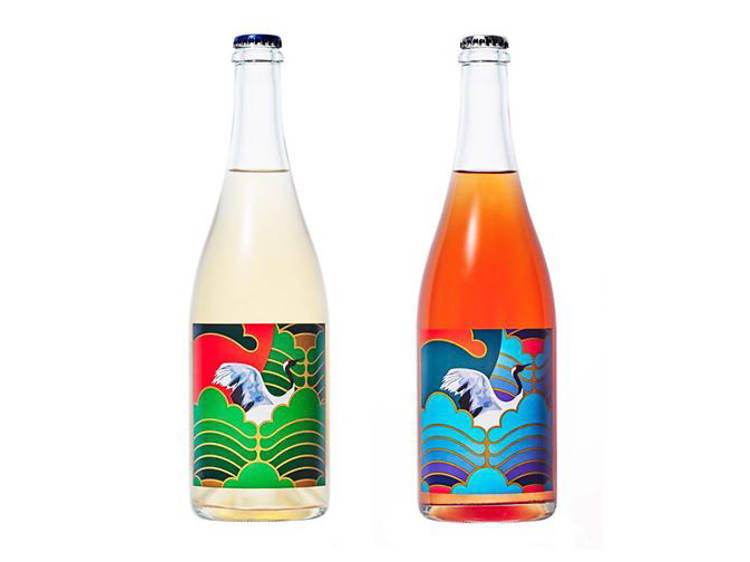 Natural wine is produced with minimal human intervention, which means no fertilisers are used in growing the grapes, and no additives or processing aids are used in production. The result is wine that is vibrant and funky tasting – a flavour profile similar to classic Japanese ingredients like miso and dashi.

While natural wine has been popular in Japan for several decades, most of it has come from France. In the last few years, domestic production has stepped up, particularly from Yamagata, Nagano and Yamanashi prefectures. Keep a look out for Koshu and Muscat Bailey A, Japan’s native grape varieties. Or go with any wine from Yamagata winery Grape Republic (pictured) – you can spot it by the bright labels. 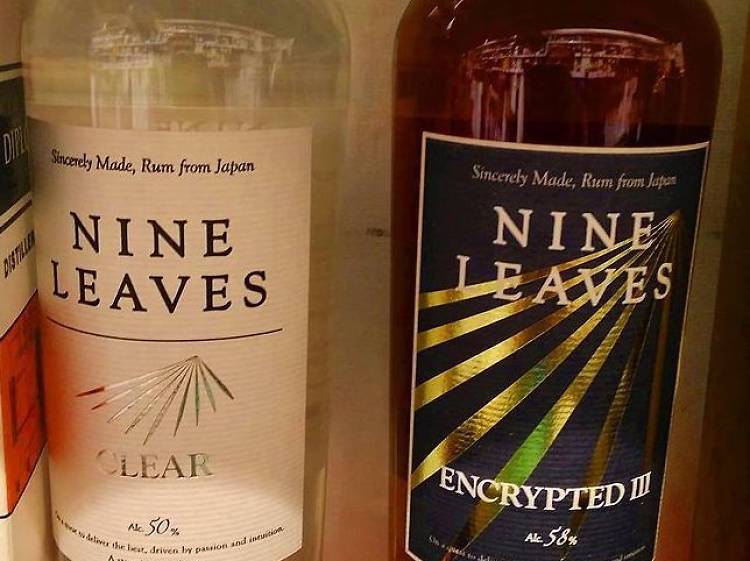 In Japan, Kyushu and Okinawa – Japan’s tropical islands – are famous for their sugar production, and increasingly famous for their rum, too. Santa Maria from Okinawa is a rhum agricole made by distilling fermented sugarcane juice, while Grace Rum, also from Okinawa, makes a white rum from molasses under the Cor Cor red label.

From Kagoshima’s Amami Islands, Rurikakesu by Takaoka brewery is a gold rum made entirely from sugar cane. Meanwhile, Nine Leaves from Shiga prefecture makes white and dark rums using brown sugar from Okinawa and water from the nearby Otowa Mountains. The brand's rich rums have found their way into several Japanese cocktail bars, proving you don't need a tropical climate to turn out amazing rum. 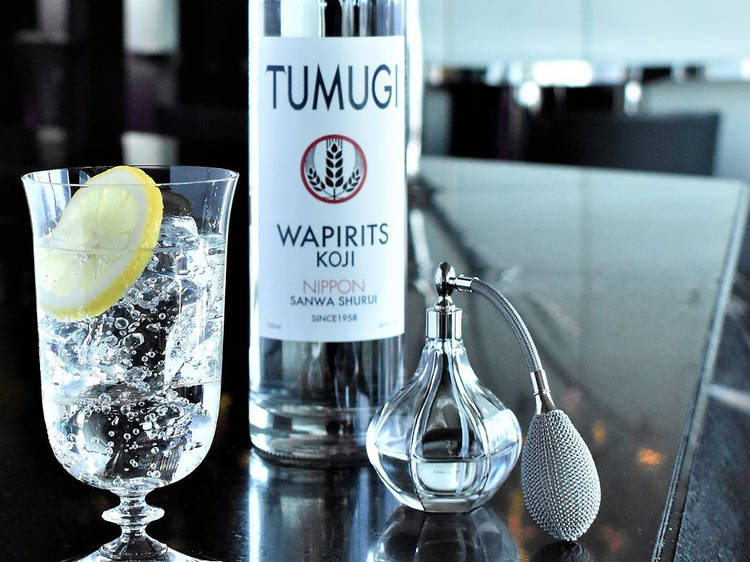 In the pursuit of a uniquely Japanese cocktail spirit, Kyushu-based distillery Sanwa Shurui has come up with Wapirits Tumugi. The base is produced like shochu, using malted barley, but then it’s fermented like sake, using both koji – the mold used for making sake – and yeast. Then, it’s infused with local botanicals like yuzu and kabosu citrus, and distilled to 40% ABV. Aside from the standard variety, there’s a version with the refreshing scent of buntan (Japanese pomelo), and even an expression that’s been aged in oak barrels. 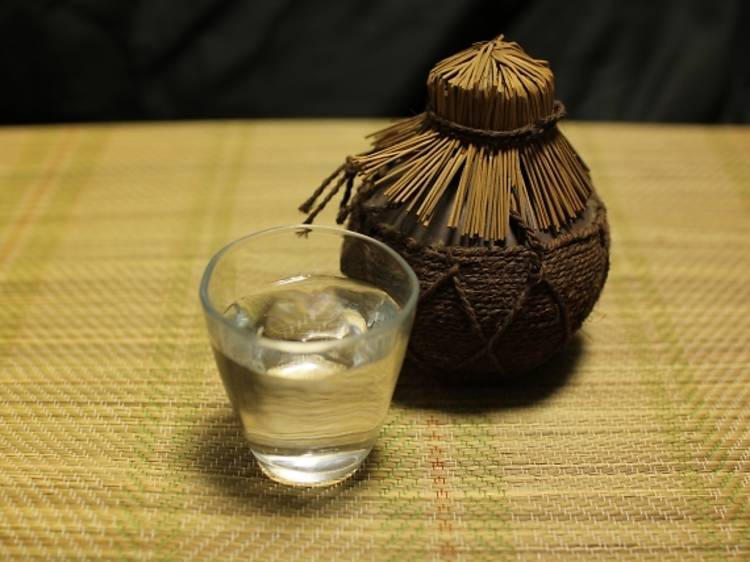 Okinawa has plenty of things going for it – idyllic beaches, relaxed locals, a vibrant cuisine and its very own spirit, awamori. Awamori is different from sake, because it’s distilled rather than just fermented; it’s also different from shochu, as it’s made from long-grain indica rice instead (shochu is from short-grain rice, grains or vegetables). Drinking awamori is like a liquid history lesson; it’s Japan’s oldest distilled spirit. Try it mizuwari – mixed with chilled, hot or sparkling water. 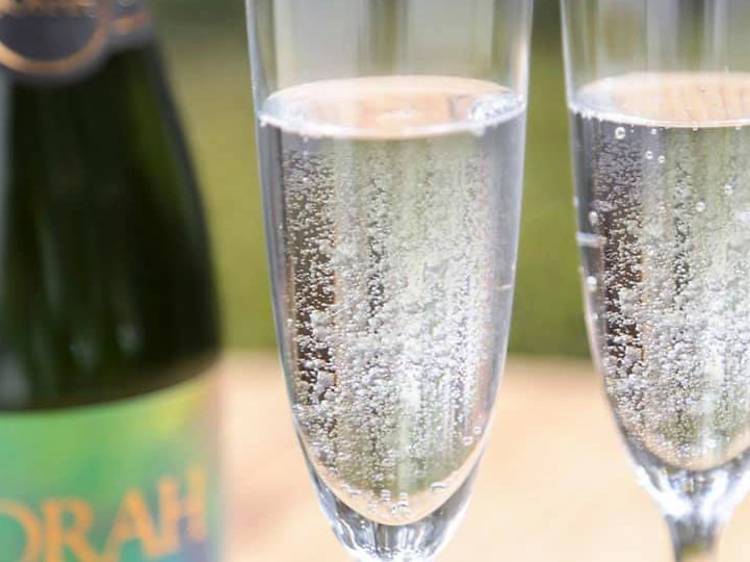 Just like wine, sake can go through a secondary fermentation to produce an enticingly effervescent drink. Sparkling sake has been around for at least 100 years, but it’s only become popular recently, as drinkers have turned towards lower alcohol options. Sparkling sake is also prized for its softer taste compared to the usual stuff. That said, some of the cheaper sparkling brands out there can be pretty rough, so make sure you don’t buy the bargain basement bottles. Chiyomusubi brewery’s Sorah sake (pictured) is a good starting point; it's filtered and has a clean, crisp finish. 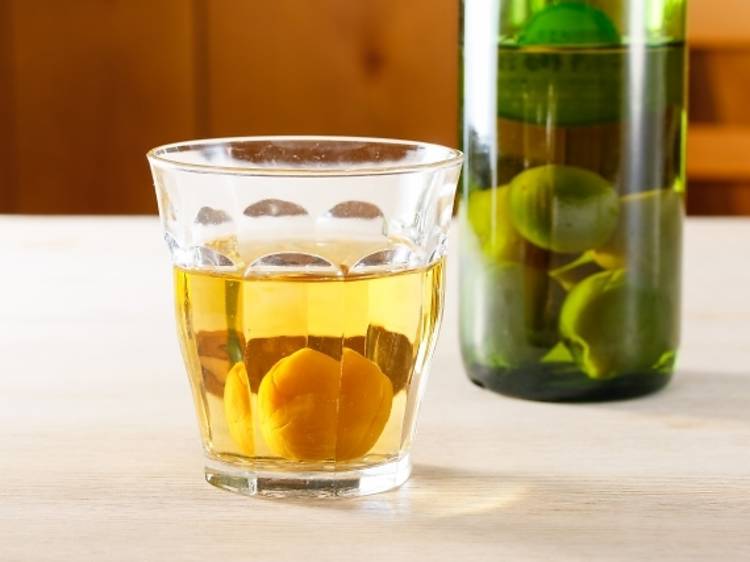 Ume, or Japanese plums, are cute little fruit that come into season around the beginning of June in Japan, and are most often turned into pickles (umeboshi) or into booze (umeshu). To make umeshu, the green fruits are steeped in shochu or sake with sugar for at least six months. In recent years, though, producers have branched out, using brandy, gin or even vodka as a base. Umeshu is good on the rocks or mixed with sparkling water. It’s even starting to make appearances in cocktails, where its refreshing mix of sweet and sour flavours makes it a great mixer. 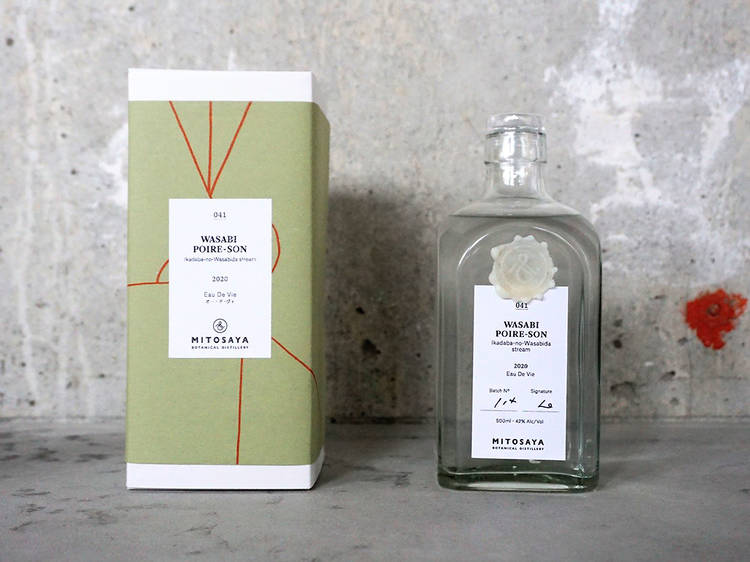 Brandy is a spirit distilled from fermented fruit juice – most often grapes, but apples, cherries, pears and apricots are popular options, too. One of our favourite Japanese brandies is Himiko, which is made predominantly with Japan’s native Muscat Bailey A grapes, known for their chocolate and black vinegar notes. There’s also Mitosaya (pictured), a brandy distillery in Chiba prefecture that was formerly a wild herb farm. Mitosaya’s creative brandies include wasabi and pear, grape and wormwood, and white peach blossom. 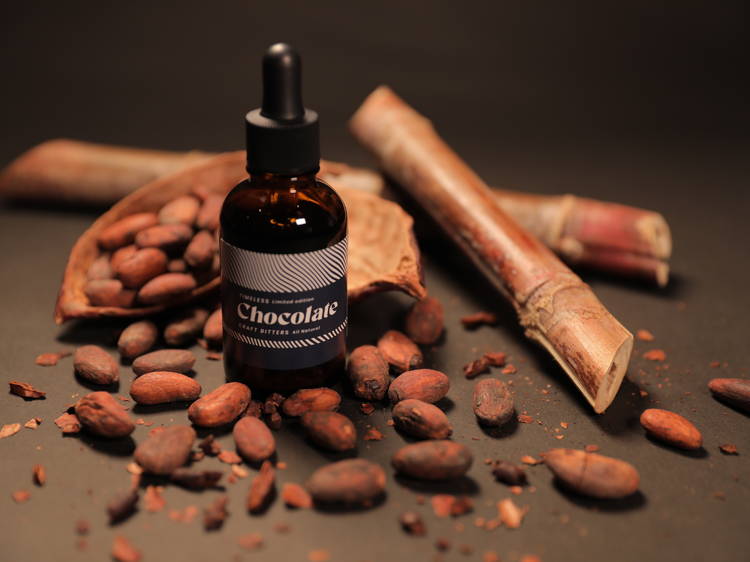 Bitters are concoctions of alcohol infused with herbs, spices, leaves, roots and other botanicals that give the mix a characteristic bittersweet flavour. These days, they’re mostly used to add complexity to cocktails, from an old fashioned to a pink gin.

In 2018, The Japanese Bitters released the first bitters produced in Japan with flavours like shiso, yuzu, umami, cherry blossom and hinoki (Japanese cypress). Other distilleries have been getting in on the act since then, like Okinawa’s Mizuho Shuzo, which released Timeless Chocolate Craft Bitters made with roasted chocolate and brown sugar. The company has also produced citrus bitters and mikan bitters, so there are plenty of flavours out there to experiment with. 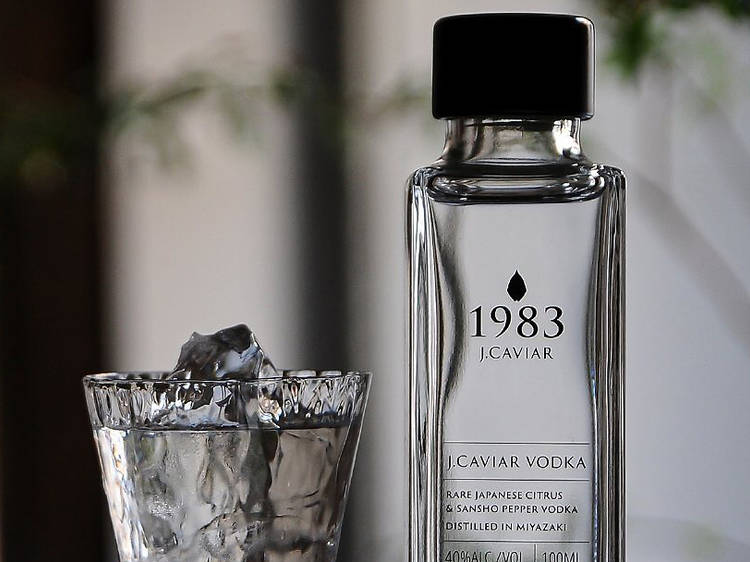 Vodka is a clear, unaged spirit typically made from rye, barley or wheat, but in Japan, local producers use rice and locally grown satsuma-imo (sweet potato) instead, then filter the distillate over charcoal. The result is a characteristically smooth and subtly sweet spirit, which distillers recommend drinking neat or on the rocks – this isn’t your typical frat house staple.

If you’re new to Japanese vodka, check out 1983 JCaviar (pictured). Distilled in Kyushu, it’s an elegant vodka infused with sansho pepper and Japanese citrus. Or try Suntory Haku, a delicate rice vodka also produced in Kyushu – the island has a long history of rice-based distilled spirits. 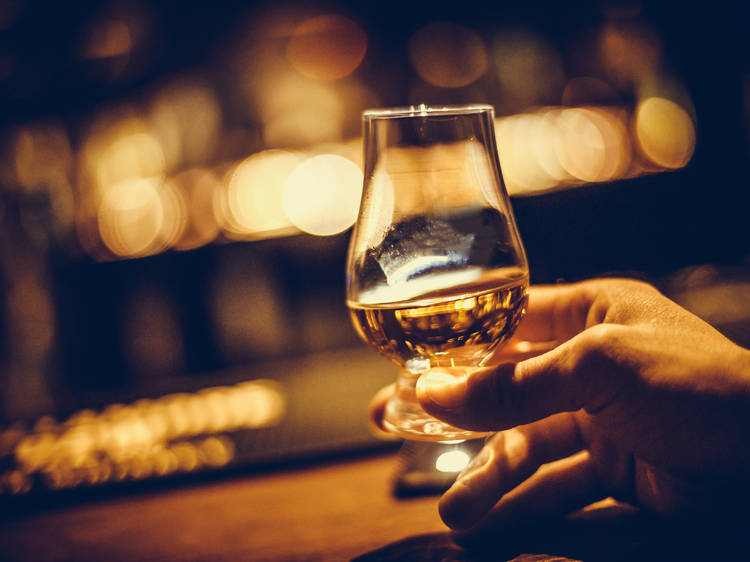 The best Japanese whiskies you can still buy

Yamazaki, Nikka and Ichiro’s may be hard to find, but there’s still great Japanese whisky out there at affordable prices 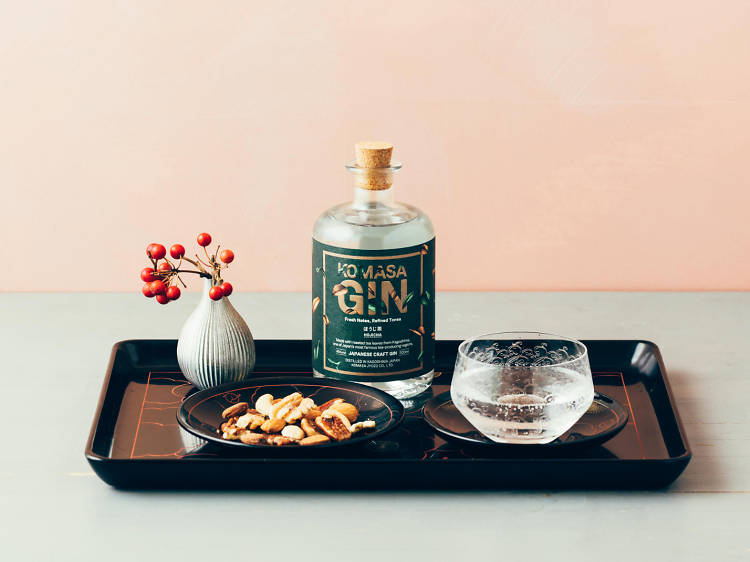 Craft gins in Japan are distinguished by their use of uniquely Japanese botanicals. Here are our favourite bottles