Located just one station away from hipster epicentre Kiyosumi-Shirakawa, known as Tokyo’s coffee central and home of the capital’s first Blue Bottle location, Monzen-Nakacho is considerably more down to earth than its lofty neighbour. An integral part of the capital’s ‘shitamachi’ (old downtown), it retains an Edo-era (1603-1868) atmosphere thanks to the storied Tomioka Hachiman Shrine and Fukagawa Fudoson Temple and the plethora of eateries and shops that have been around since the olden days. Monzen-Nakacho (locals call it ‘Mon-Naka’) really comes into its own when night falls and the countless izakayas and small restaurants open, filling the air with tipsy chatter and smoke from charcoal grills. This is heaven for the budget-conscious drinker – if you know where to head, that is. Here are our picks. 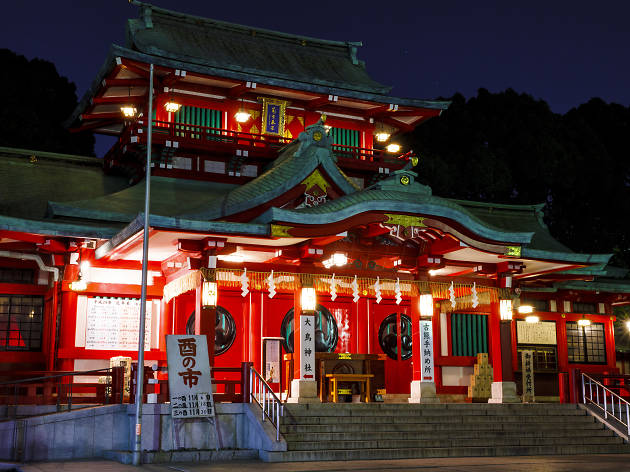 Any nocturnal adventure in Monzen-Nakacho should start at the majestic Tomioka Hachimangu (Tomioka Hachiman Shrine). The grounds are lit up after sunset, contributing to a magical atmosphere. Enshrining the emperor Ojin, this is said to be the largest Edo-period shrine dedicated to the Shinto deity Hachiman, and is known as the birthplace of Edo-era professional sumo. There’s a wrestler-size stone monument here inscribed with the names of the yokozuna (grand champions) of old.

On the 1st, 15th and 28th of every month, markets are held around the shrine until sunset, with street vendors selling everything from festival staples like takoyaki (octopus dumplings) to accessories and daily necessities. The shrine was shocked by a rather violent event at the end of 2017, but the peace has returned since, and it remains well worth visiting. 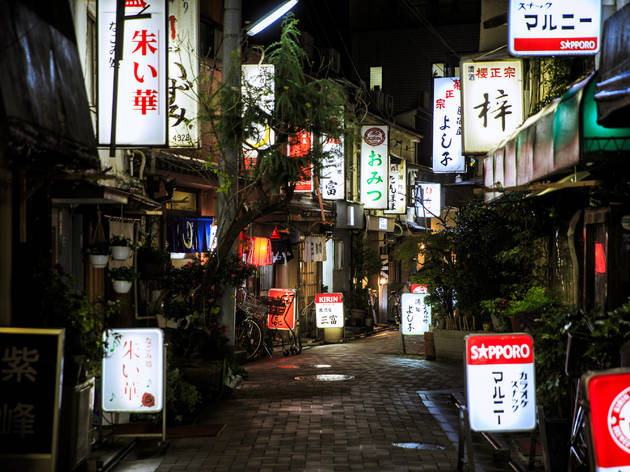 Only a quick stroll from Tomioka Hachiman is Tatsumi Shindo, a nostalgic entertainment district which retains a Showa period (1926-1989) feel. It centres on a narrow 50-metre-long street packed with tiny bars, including New Motsuyoshi, a stand bar with a meal ticket system. Located at the entrance to the alleyway, it’s the perfect first stop to begin the night’s drinking. Signature dishes include motsu nikomi (giblet stew, ¥350) and various types of yakitori (¥150). After a couple of beers, you’ll be ready to head out and bar hop your way down Tatsumi Shindo – best be ready for a bout of karaoke, too. 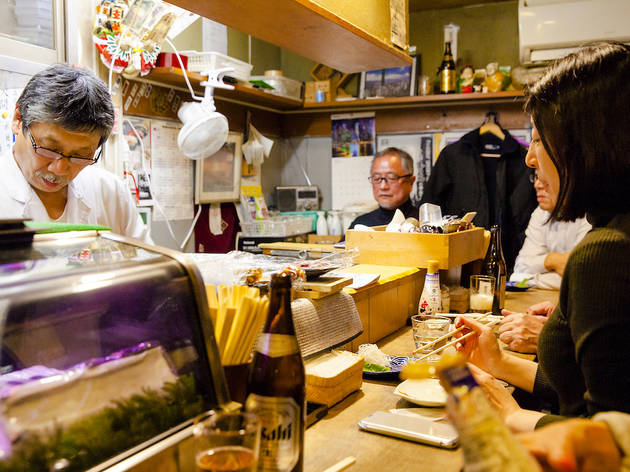 Those in the mood for delicious sashimi should make a beeline for Taiyo, a tiny joint that can only host around ten customers at a time and is bustling with regulars every night. Originally a sushi stand bar, it faced an existential crisis when the previous owner passed away, but was rescued and is now run by the old boss’s apprentice.

Don’t miss the assorted sashimi plates and grilled fish, all made with ingredients delivered fresh from Tsukiji fish market every morning. The friendly chef is happy to give recommendations for both food and sake – you’ll probably need the latter, as the drink menu is rather extensive. 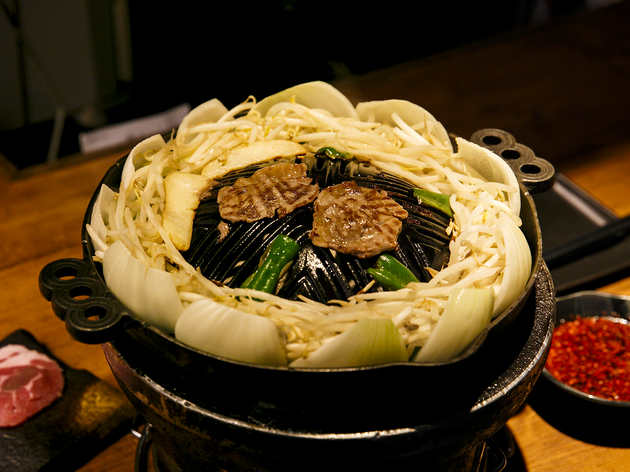 Where else in Tokyo do you get to pick from 22 different cuts of mutton? A down-to-earth eatery specialising in ‘jingisukan’ (‘Genghis Khan’), the Hokkaido-born mutton dish that is grilled on a round skillet with onions and bean sprouts, Genghis Tei offers its signature set with a drink for a mere ¥1,400 year-round, but the lamb shabu-shabu is most diners’ referred choice in winter. This hot pot with thinly sliced meat and vegetables is sure to warm you up – just don’t forget to throw in some noodles at the end for that carb kick. If you’re visiting during cherry blossom season, ask to be seated in the tatami room on the second floor for pretty sakura views. 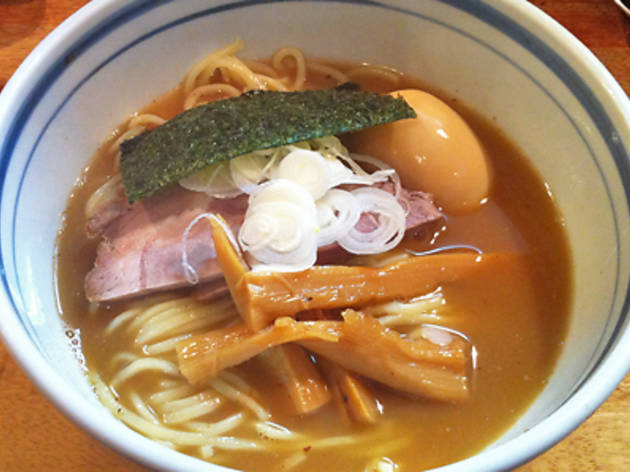 Just five minutes’ walk from Monzen-Nakacho Station, this noodle spot known for its fat-free, seafood-broth ramen is never short of customers – most likely because of its nutritious approach to Japan's favourite fast food, or maybe because its signature ramen costs just ¥650. Either way, Kokaibo is known for its quality ingredients, including diligently prepared ajitsuke tamago (seasoned, soft-boiled egg) and thick menma (seasoned bamboo shoots).

Run by a married couple, the restaurant is also notable for offering warmer service than you'd expect at many of Tokyo's top ramen joints – nourishment for the soul, as well as the stomach. Other dishes worth sampling include menma ramen (¥800), tsukemen (¥750), and chashu gohan (rice with fatty sliced pork, ¥900). 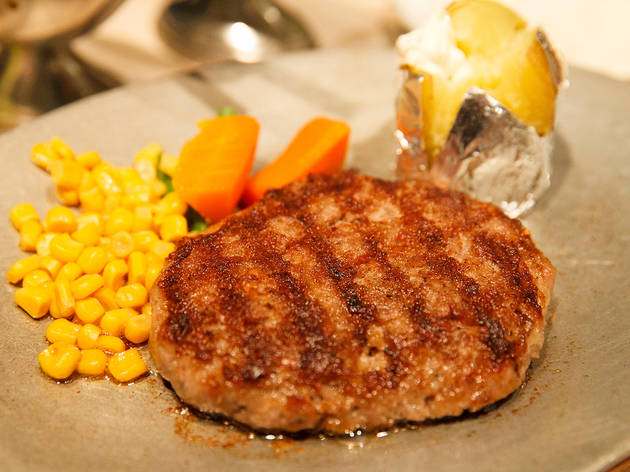 Just four minutes from Monzen-Nakacho Station, you'll find this chic restaurant in an inconspicuous back alley. Their main business is steak but, come lunchtime, they offer 30 chargrilled burger meals (¥1,050) – giving new meaning to the term 'limited-edition'. The patty is perfectly crispy on the outside and juicy and flavourful on the inside. 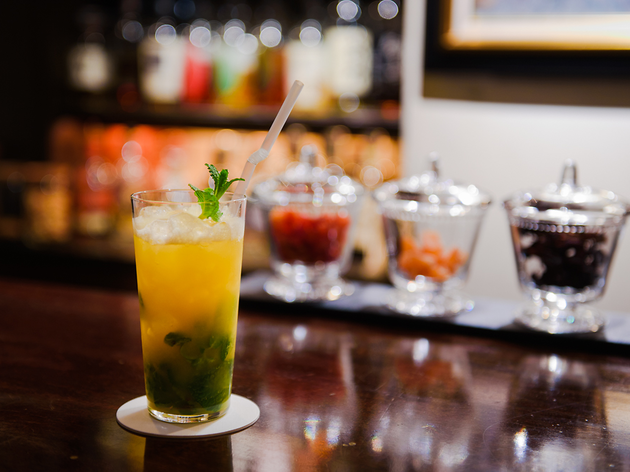 Sitting quietly in a back alley among Monzen-Nakacho’s jumble of clubs, ‘snack’ bars, yakitori joints and yakiniku restaurants, C appeared here long before the neighbourhood became a minor bar hotspot and is up there with Opa in the race for the area’s best watering hole. Stepping through the door, you could just as well be in Ginza: manning the bar is Hiroyuki Shiiba, who did time at JBA Bar Suzuki, Yoshu Hakubutsukan and Superior before breaking out on his own.

And why Bar C? It’s ’Shiiba’ read backwards with a Japanese pronunciation, of course. The cocktails are just as exquisite as you’d expect from a former Ginza stalwart – with a distinct shitamachi twist, of course – while rare bottles are legion as well. Make sure to try the Merci, an award-winning cocktail made with Marie Brizard aniseed liqueur. If you’re looking to feel a little fancy east of the river, this ought to be your destination. 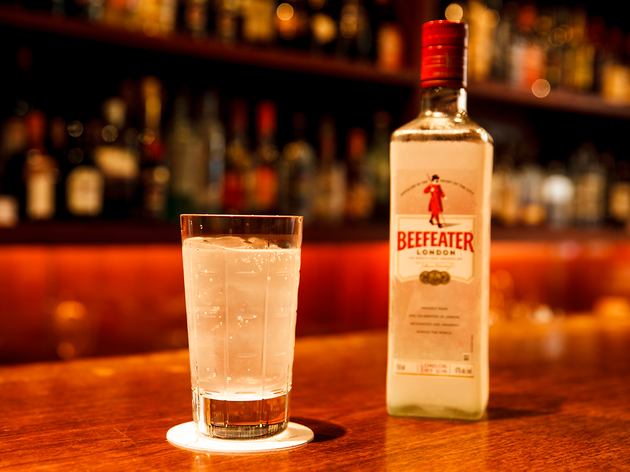 You’re spoiled for choice in Monzen-Nakacho when it comes to classy drinking dens, but Bar Opa stands out from the crowd as the ideal place for a laidback evening spent sipping quality liquor. The sister outpost of a famed Ginza cocktail temple, it opened in 2001 but has remained something of a local secret – perhaps thanks to its hard-to-find location.

Enter one of the narrow alleys east of the station, head up a somewhat unpromising staircase and open the door next to the ‘Opa’ sign to find yourself in a spacious, faintly lit room cosily decked out with wood. While fruit cocktails are the main attraction, the food menu is also noteworthy: we like the herb-flavoured fries and the made-from-scratch pizza. 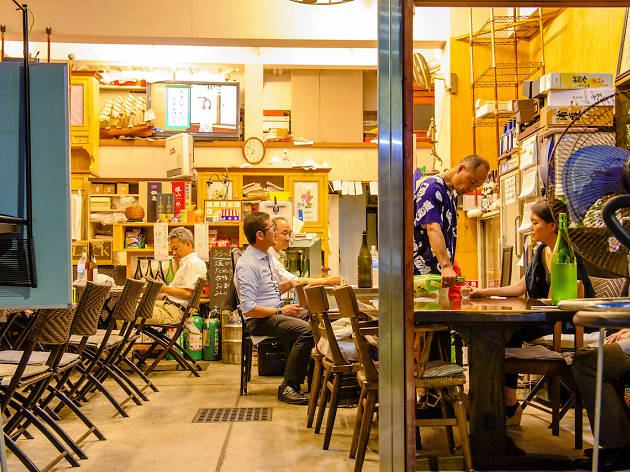 Opened in 2011 in Monzen-Nakacho, a neighbourhood packed with comfy watering holes, Se-Bon occupies a renovated warehouse that feels like Tokyo’s best kept secret. In summer the floor-to-ceiling shutters are thrown open to let the light in, while in winter they are closed down to create the cosiest of atmospheres.

The drink selection starts and ends with sake: Se-Bon’s owner keeps regulars happily on their toes with a rotating lineup of high-quality, hard-to-find bottles from the likes of Jikon and Hanaabi, all priced so that three glasses will set you back less than ¥2,000. A single glass can be had for under ¥500, while appetisers – including smoked duck, steamed dumplings and shiokara (salted and fermented seafood) – go for a wallet-friendly ¥260.

Bringing your own food is allowed as well, although you’ll need to pay a small fee before digging in. Se-Bon is a laidback joint where you’re expected to strike up conversation with fellow drinkers and make new boozy discoveries. Two other shops of the same name can be found in Toyosu and Morishita. 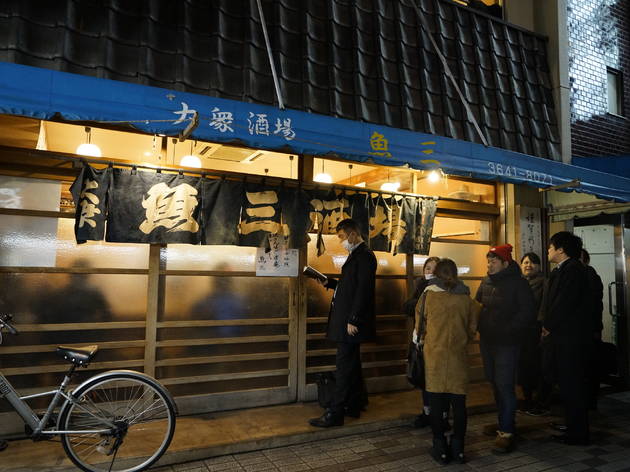 This oldschool izakaya is crawling distance from Monzen-Nakacho Station, and has been in business since 1954. The first and second floors both have a horseshoe-shaped counter, which is reserved for customers alone or in pairs; if you're a group of three or more, you'll immediately be redirected to a table on the third or fourth floor. Seafood is the name of the game here, and with that golden combination of lots of variety, good taste and reasonable prices, there's rarely not a queue here.