Flowers, turtles and fine meat on the newly trendy east side

Considered some of the least attractive parts of Tokyo only a few decades ago, the eastern suburbs sandwiched between the Sumida and Edo rivers are undergoing a quiet revival, the roots of which go far beyond the opening of the Skytree in 2012. Traditionally on the very edge of the Edo shitamachi (downtown), Kameido is a representative example of these newly vibrant neighbourhoods, with plenty of prosperous singles and families with young children moving to the northern outskirts of Koto Ward. Well-connected to the city centre but calm and relatively rich in parks, Kameido also exudes a retro charm – just take the miniature-sized Tobu Kameido line north toward Mukojima for proof.

Said to have been a turtle-shaped island (Kamejima) before landfill work connected it to the mainland, the area was best known among Edoites for its Ten shrine and the plum wood that grew on the grounds of merchant Hikoemon Iseya’s country estate. People flocked to see the white and pink flowers in early spring, but rarely wandered further east from there, as everything beyond the shrine used to be farmland. Perhaps because it was at a safe distance from the intrigue of the city, Kameido also hosted the government mint during the reign of the fourth shogun, Tokugawa Ietsuna.

Unfortunately enough, a destructive 1910 flood washed away the Iseya garden and ruined the plum trees, ushering in a less exciting era for the now-developing neighbourhood. Rising from the ashes of the war, Kameido was rebuilt as a mostly industrial area, but that influence is no longer very visible. Instead, its wide streets are now lined with everything from huge shopping complexes to hole-in-the-wall eateries, attracting adventurous gourmands of all ages to stop by. 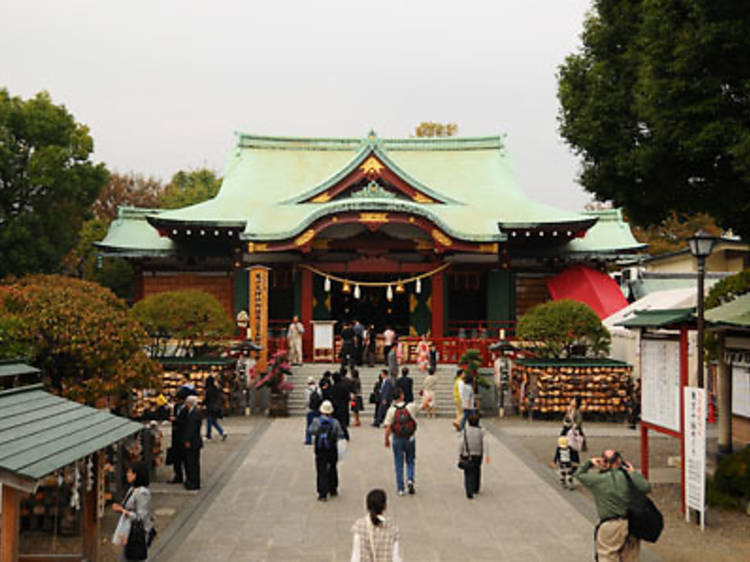 Wander under the wisterias at Kameido Ten Jinja

First built in the mid-1600s, this Kameido icon has burned down and been rebuilt numerous times, but nonetheless maintains an air of refined tradition and peace. Famous for its twin drum bridges, the shrine is best visited either in winter, when the plum trees bloom, or later in spring, when the gorgeous hanging wisterias attract hordes of admirers. Outside of flower season, look for the overweight koi carp in the pond or the quirky stele dedicated to old writing equipment.
Read more 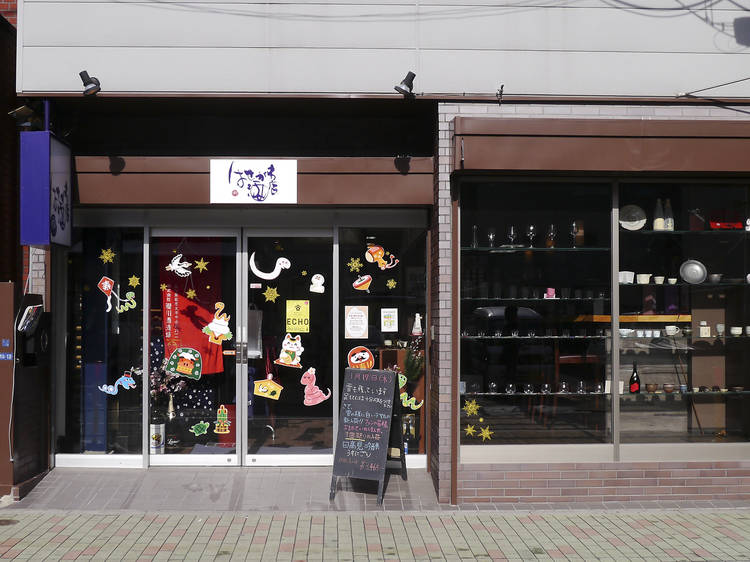 They now operate stores all over Tokyo, but this is where high-flying liquor dealers Hasegawa first got started. A treasure trove for friends of domestic spirits, the shop stocks both nihonshu and shochu in ample varieties, clearly organised by maker, area and price. If you’re looking for a specific bottle or need help with pairings, do ask the knowledgeable staff – you might even get an English-speaker every now and then. Unfortunately enough, their cozy in-store bar closed down at the end of November 2014. Thanks to @shitamachi66 for the suggestion!
Read more
Advertising 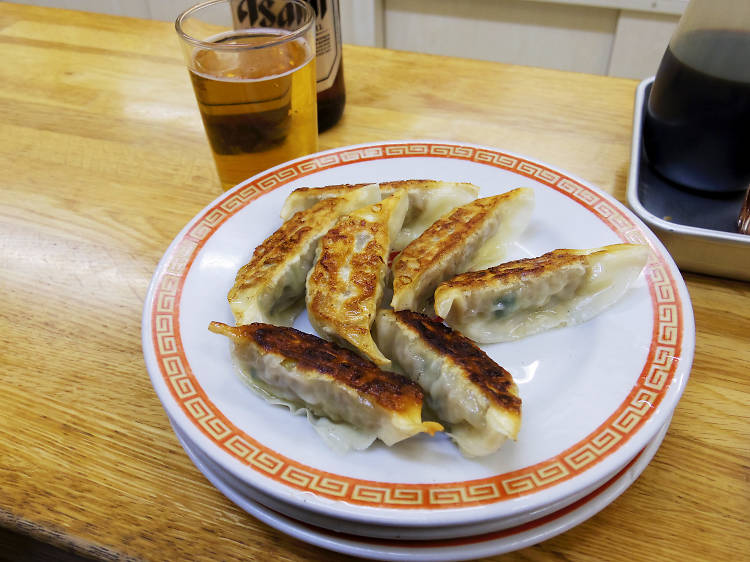 Chow down dumplings at Kameido Gyoza

You’ll barely have time to sit down by the counter before a steaming plate of gyoza arrives in front of you – with only one item on the food ‘menu’, this local favourite takes specialisation to its logical extreme. Still, more than the rather basic fare itself, low prices (¥250 per plate) and the potential for eating contests are what keep fans coming back. Multiplication sheets on the walls help you keep track of the bill – an absolute necessity, as the energetic ladies patrolling the premises are more than eager to fill up any plates down to two dumplings or less.
Read more 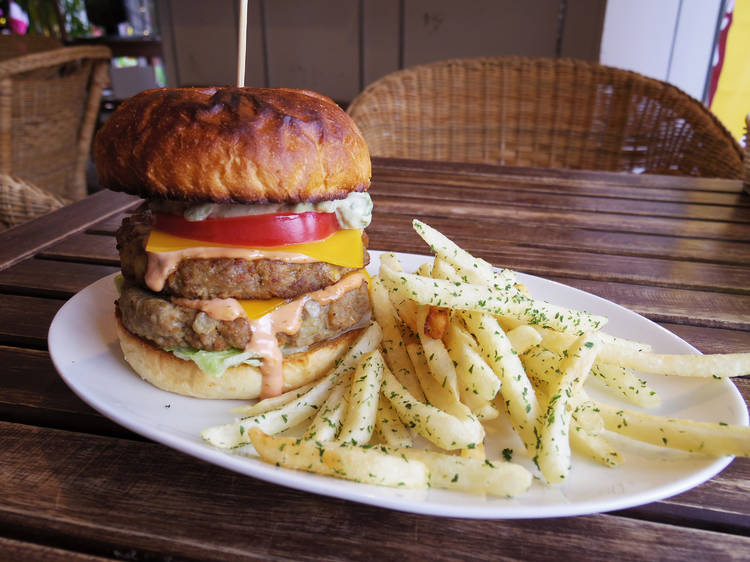 Dine out with the young 'uns at Chokotaki Home

Operating a kid-friendly café in a neighbourhood filled with young families could probably be done with minimum effort, but the good folks at Chokotaki go the extra mile to ensure even those young only at heart feel welcome. Their ice cream-topped Danish bread desserts and extravagant hot chocolate are nice choices for powering you through the afternoon, while the ‘doria’ (a kind of rice gratin) and burgers are seasoned to fit children’s palates. Note that the place often closes down for private birthday parties and other events in the evenings. Thanks to Valerie Cox for the suggestion!
Read more
Advertising 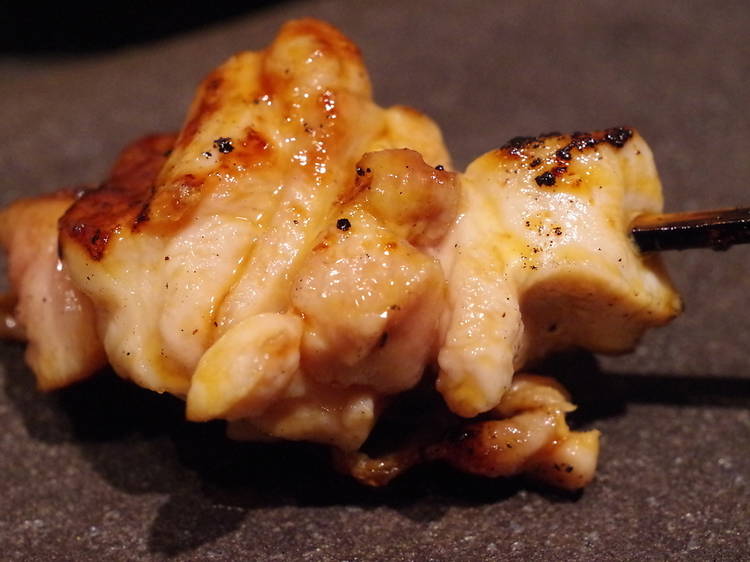 Even if you’re already well versed in the ways of upscale version of yakitori, you just might be in for a surprise at Torisawa. Serving up unbelievably juicy, creatively seasoned and prepared chicken, along with innovative vegetable skewers, the jolly fellow behind the counter makes even first-timers feel right at home. The best choice here is to let the chef do his thing without restrictions, so order the omakase from the get-go and turn your eyes to the brief but impressive sake list – friends of junmaishu (pure sake) will have a field day. Thanks to @shitamachi66 for the suggestion!
Read more 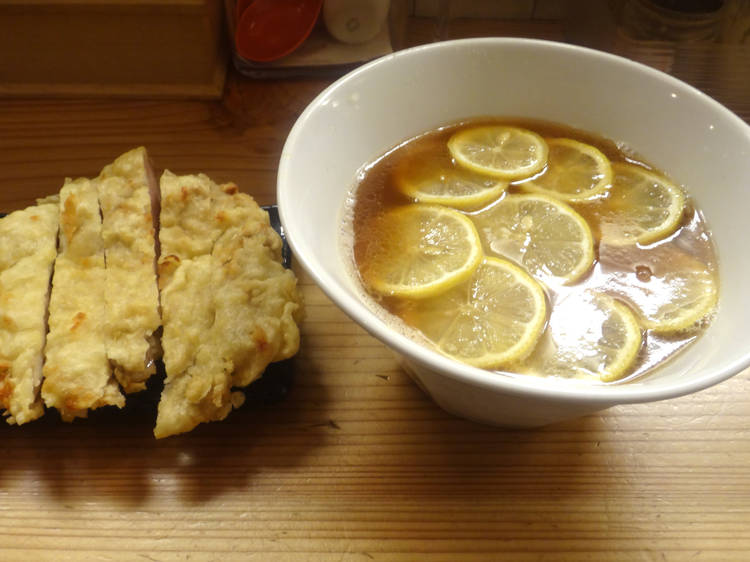 Fun and family-friendly aren’t words normally associated with ramen shops, but this noodle house bucks more than one trend. Known as the birthplace of lemon ramen, Rinsuzu is clean and charming, with a long wooden counter and a spacious open kitchen. Best enjoyed with chicken tempura on the side, the signature dish here is more than just a marketing trick, as the fresh lemon gives a nice kick to the shoyu-based triple soup and the firm, thin noodles. The combo of bird and bowl is no light one though, so do go hungry. Thanks to Mchuck for the suggestion!
Read more
Advertising 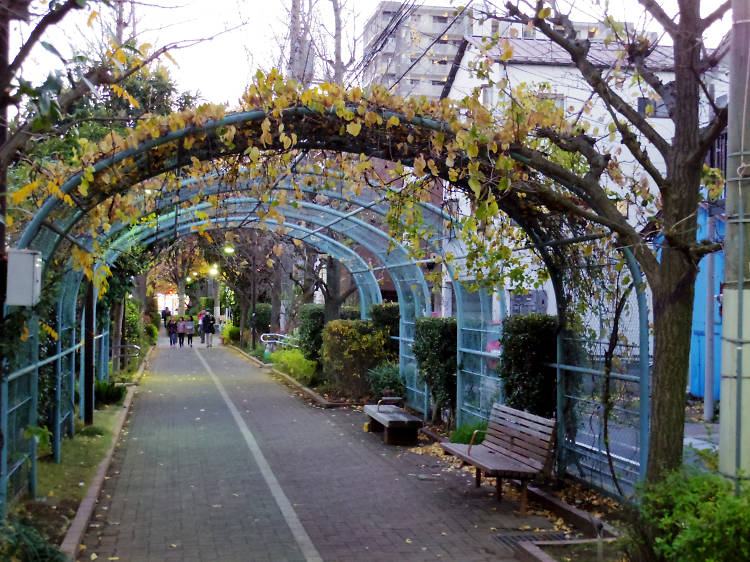 Trek along old tracks at the Toden Parks

You might not even guess at first sight, but this tree-lined thoroughfare reaching from Ojima all the way north to Kameido Station was built where tracks once carried Toden streetcars ferrying commuters from the eastern suburbs towards the city centre. The almost complete dismantling of the tram network in the 1970s was a disappointment for many residents, who successfully lobbied to preserve the memory of the routes. When visiting, remember to look for the fun train-related decorations found scattered along the path.
Read more 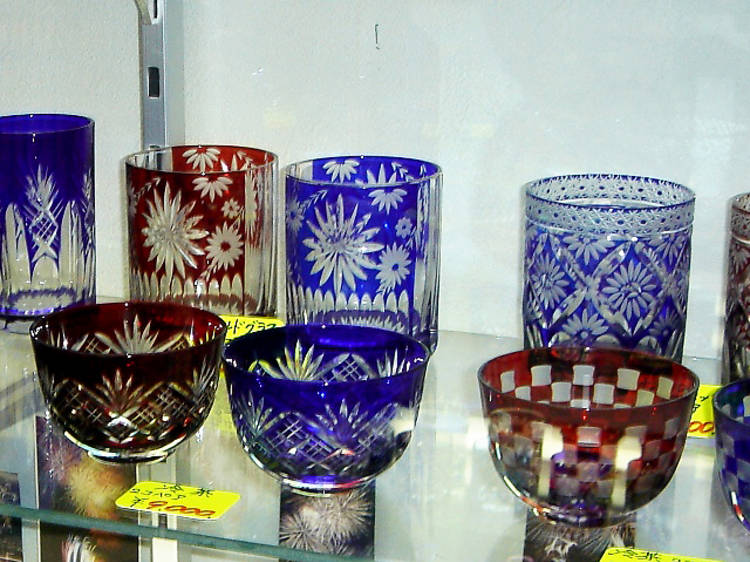 Marvel at decorative glass at Hanashyo

The intricately engraved, colourful glassware known as Edo Kiriko is intimately associated with Kameido, where many of the masters of this craft are still based. Although not as long-running as some of its competitors, the Hanashyo studio is one of the premier names in the art today, and produces gorgeous, stylish wares that make for impressive souvenirs. Whether you’re looking to pick up some extra special glass for yourself or just want to admire the crafts, Hanashyo’s showroom and store, found just off the shopping arcade in front of Katori Shrine, is the place to go. Thanks to Felicia T. for the suggestion!
Read more
Advertising 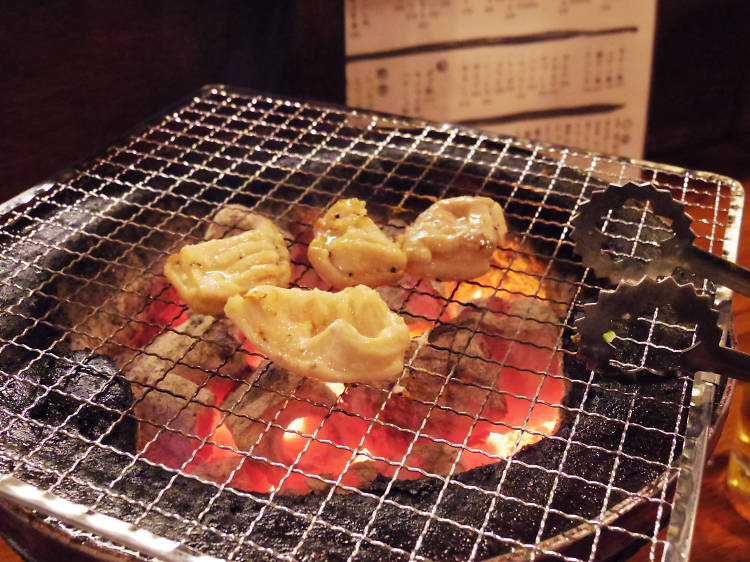 There’s practically always a queue in front of this deceptively shabby-looking eatery, and it sure ain’t because of some passing fad: serving some of the finest offal on this side of the Sumida River, the folks at Kameido Horumon source fresh intestines from the Tokyo meat wholesale market every morning, work some magic with seasoning and sauces, and offer plates of the good stuff for as low as ¥400 a pop. Carnivores can eat their fill for around ¥3,000 per person – nothing short of a bargain. Just remember to leave your finery at home.
Read more 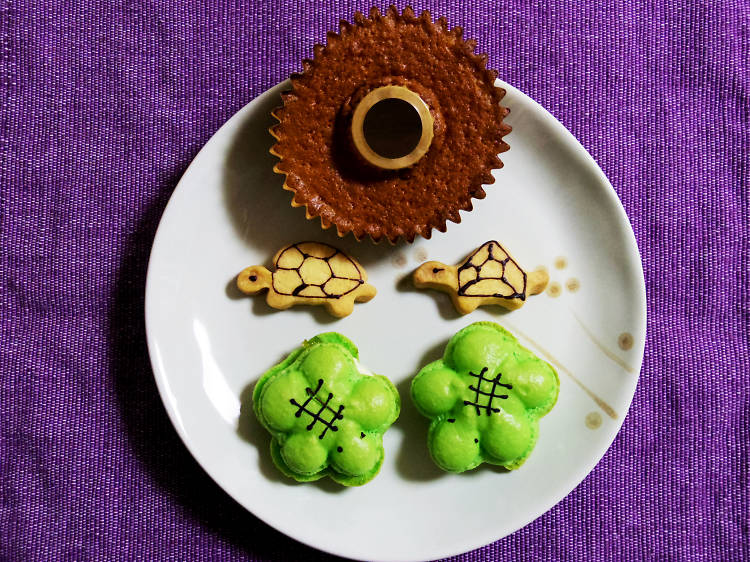 Shamelessly appropriating the name of Kameido’s original ‘tourist attraction’, the plum wood and estate depicted by ukiyo-e master Hiroshige in one of his best-known works, this faux-Edo structure houses the area’s tourist information centre, a multi-use hall and, most importantly, a shop selling local specialities like turtle-shaped cookies and plum-flavoured mochi rice cakes. The outdoor ‘ukiyo-e gallery’, with its woodblock print-style posters and advertisements, is also worth a quick look.
Read more
Show more
Recommended