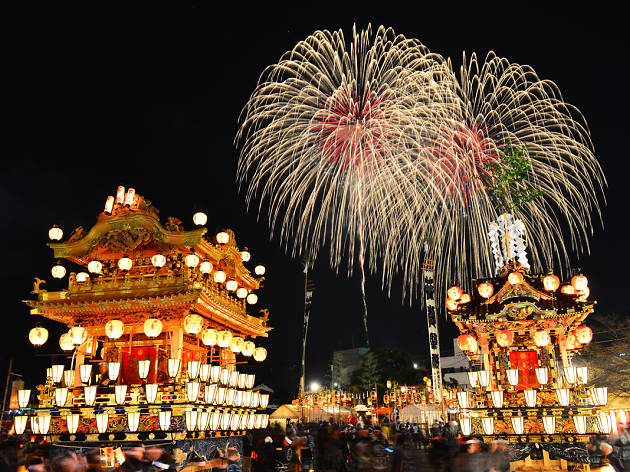 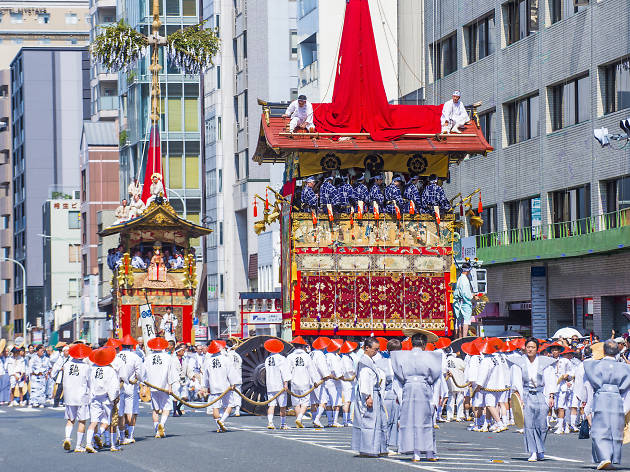 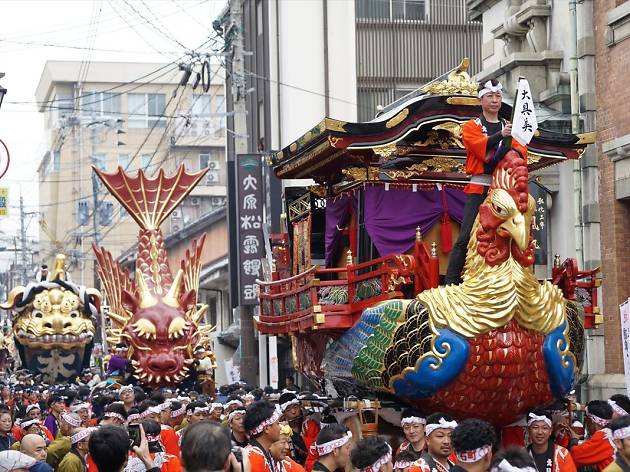 Japan hosts stunning annual festivals, some of which have been celebrated for centuries. Festivals, also known as matsuri, are steeped in tradition, offering visitors a glimpse of Japanese culture that you won’t find at your average museum. What makes traditional festivals in Japan particularly special is the fact that many of them are perfectly preserved customs that have been passed down through the generations. It also helps that many Japanese people are still actively involved in these festivals – they're still deeply important community gatherings, and that's what makes them worth seeing.

If you’re wondering which festivals are the best ones to catch, we’ve rounded up Japan's most jaw-dropping and spectacular year-round festivals. From the snowy showcase at Hokkaido to summer’s bon odori dancing, these are the celebrations you should definitely check out while you’re in the country.

Note: most, if not all, of the festivals in this list have been cancelled for 2020 due to Covid-19 coronavirus. We do hope they will be reinstated in 2021 when it's safe to travel again.

RECOMMENDED: 10 things to look forward to in 2021 in Tokyo and Japan 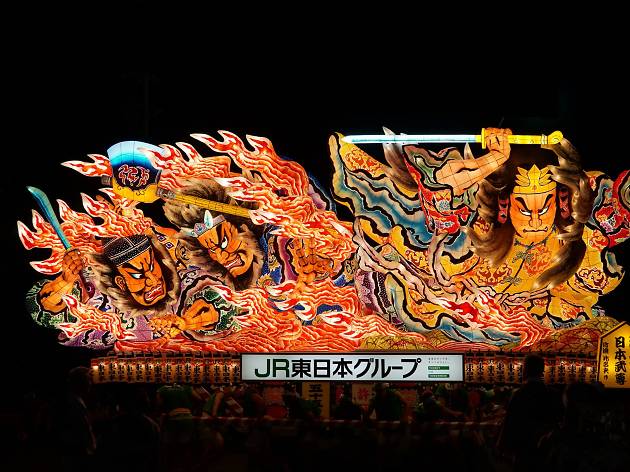 What is it?
The summer Aomori Nebuta Festival is a Japanese fire festival that sees at least 20 massive lantern floats (known as nebuta) paraded down the streets of Aomori in northern Honshu. These colourful floats are inspired by traditional kabuki or mythical Japanese stories and are lit up during the evening parade. The festival also features nebuta dancers accompanying the parade, along with performers playing instruments such as flutes and drums. A staggering number of guests head on up to Aomori for this annual celebration when the city hosts approximately 3 million people over the duration of the festivities.

Why go?
One of the most popular festivals in the country, Aomori Nebuta Festivalwas designated an Important Intangible Folk Cultural Property of Japan in 1980. Don’t miss the final day of the festival, when the nebuta floats are placed on boats in Aomori Bay and sailed around under a stunning fireworks display.

When is it?
The festival takes place between August 2 and 7 every year, with parades of the floats scheduled for every evening except the night of August 7 – that’s when the floats are on boats in the bay. 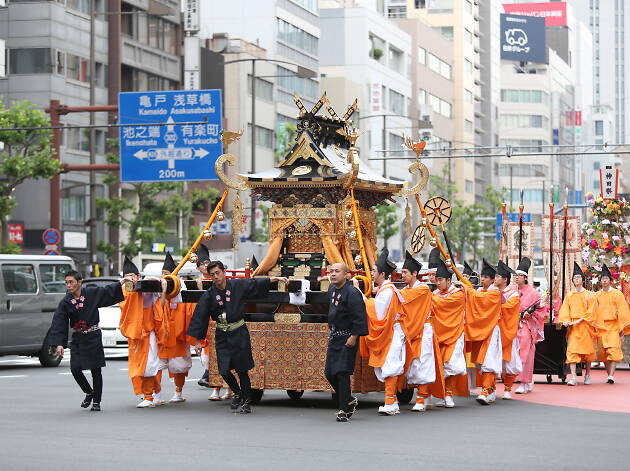 What is it?
The Kanda Matsuri is one of Tokyo’s three major festivals and takes place around Tokyo’s Kanda Shrine. In fact, the festival is considered one of Japan’s top three, along with the Kyoto Gion Festival and Osaka’s Tenjin Matsuri. The festivities span about a week, with the highlight being the full-day parade through the central Tokyo districts of Kanda, Nihonbashi, Otemachi and Marunouchi, accompanied by mikoshi (portable shrines) from these neighbourhoods. The Kanda Matsuri originated in the Edo period (1603-1868) as a demonstration of Edo’s (present day Tokyo) prosperity when the first Tokugawa shogun settled there.

Why go?
Need a bit of luck? Today, the festival is considered a celebration of good fortune and prosperity and is one of the largest festival processions in the capital. Plus, it’s a rare sight to see as the festival happens only on odd-numbered years.

When is it?
The spring festival takes place in mid-May every other year and runs for six days, with the main festivities concentrating on the Saturday and Sunday of the decided week. The next festival is slated for May 2021. 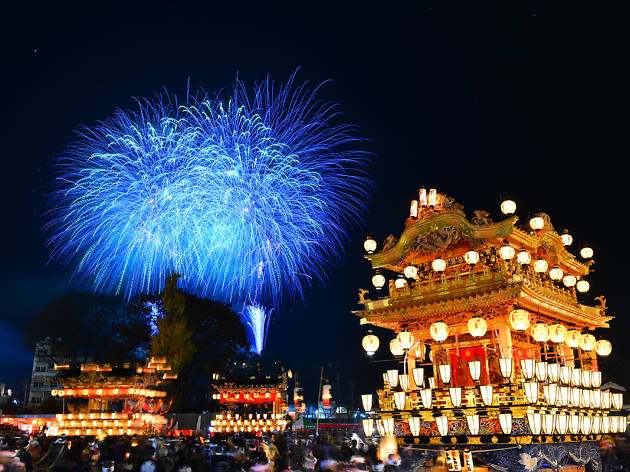 What is it?
The Chichibu Yomatsuri, otherwise known as the Chichibu Night Festival, is an annual celebration which takes place out at Saitama’s Chichibu Shrine and has been celebrated for over 300 years. It's a Unesco Intangible Cultural Heritage, and the highlight here is the massive floats with their stunningly ornate designs. The evening procession sees four large floats moving down the streets, accompanied by smaller floats known as kasaboko and lively music courtesy of flutes and taiko drums. The areas around the procession can get really crowded, but there’s still plenty to see as the final day of the festival boasts an amazing fireworks display and a number of food and drink stalls.

Why go?
Chichibu Shrine is roughly 90 minutes from central Tokyo, so it’s an easily accessible festival if you’re already visiting the capital. Plus, there’s a large fireworks display which is rare in winter – fireworks are usually a summer thing in Japan.

When is it?
The festival takes place every year on December 2 and 3, with most of the main festivities happening on the second day, including the large procession of floats and the fireworks show. 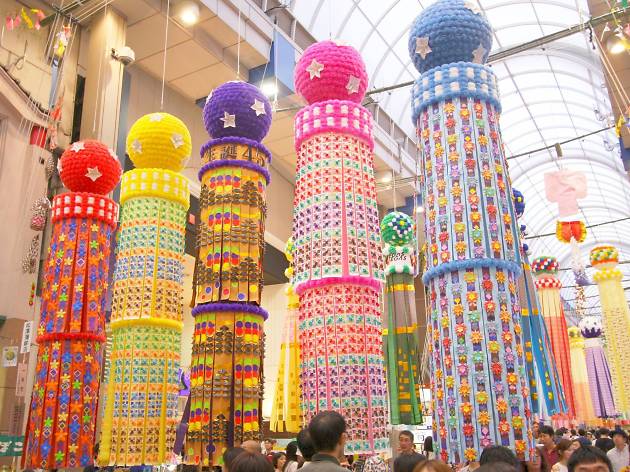 What is it?
A common festival around Japan, Tanabata is also known as the ‘star festival’. This Sendai edition is one of the largest Tanabata festivals in the country, and it happens annually at the beginning of August. The festivities take place in downtown Sendai with the highlight being the colourful streamers that can reach up to 5m in length, strung through the city’s main shopping arcade. These cheerful decorations are crafted by local shops, businesses, schools and even community groups.

Why go?
Other than seeing the beautiful streamers, there are also live music performances, traditional dances, food vendors, and a fireworks display to kick off the festival on the evening of August 5.

When is it?
The festival was traditionally celebrated on the seventh day of the seventh month of the year by way of the lunar calendar. When Japan pivoted to the solar calendar, the festival moved to August and is now held annually from August 6-8, with the festivities kicking off on the evening of August 5. 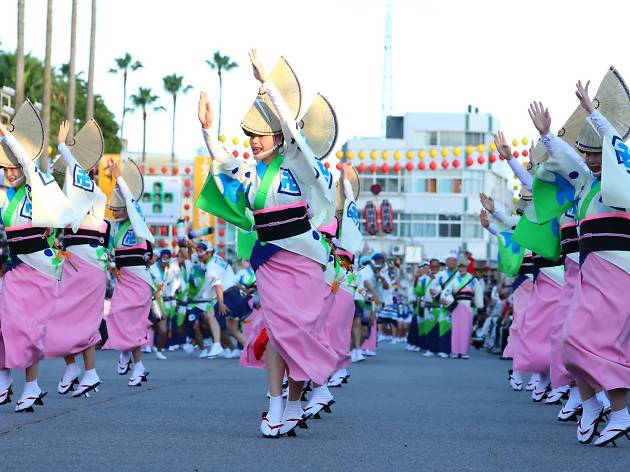 What is it?
This annual celebration takes place in Tokushima and is one of the most famous summer dance festivals in Japan. Each year, thousands of visitors flock to Tokushima to watch people perform what’s known as the ‘fool’s dance’, with a history dating back more than 400 years. There are celebrations throughout the day, but the main event happens in the evening when groups dance their way through the streets of downtown Tokushima. Dancers are accompanied by traditional musical instruments that set the beat. Women generally wear colourful yukata (summer kimono) while the men dress up in happi (lightweight coats with straight-sleeves).

Why go?
Besides the procession of dancers, the festival sees a number of stages set up for professional dance group performances. Another big draw are the festive food stalls and games. You might even be able to join a dance or two to show off your own moves – so don’t be shy!

When is it?
The Awa Odori is held during obon season (when spirits of the deceased are thought to visit the realm of the living) in mid-August. It's generally held from August 12 to 15.

What is it?
The Kyoto Gion Matsuri is the annual festival of Yasaka Shrine, with a history going back about 1,100 years. It's considered one of the top three festivals in Japan, along with Tokyo’s Kanda Matsuri and Osaka’s Tenjin Matsuri. The festivities span over the entire month of July but the highlight is the procession of 33 large floats known as yamahoko, which are pushed down the streets of Kyoto. Nearly all of the floats – or 29 to be exact – are designated Important Tangible Cultural Properties. There’s a large main procession followed by a smaller one on a later date.

Why go?
As the festival spans an entire month, there’s something for everyone to see as long as you're in Kyoto sometime in July. There are a number of fringe events leading up to the main procession: watch locals assemble the ornate floats, see beautifully decorated folding screen displays in Kyoto’s traditional machi-ya townhouses, and more.

When is it?
The festival takes place throughout the month of July, with the grand procession of floats scheduled for July 17. There is also a second smaller procession on July 24. 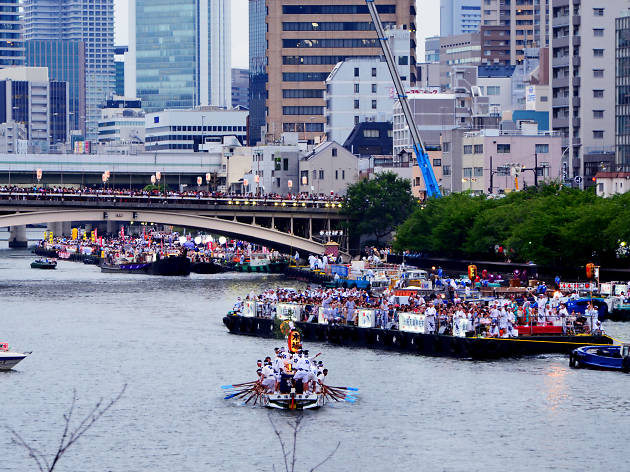 What is it?
Undoubtedly one of Osaka’s most famous festivals, Tenjin Matsuri is also one of Japan’s three big traditional celebrations, along with Kyoto’s Gion Matsuri and Tokyo’s Kanda Matsuri. The Tenjin Matsuri is tied to Osaka’s Tenmangu Shrine and honours the shrine’s deity Sugawara no Michizane, the god of scholarship and learning. The first day of the festival sees rituals performed on the shrine grounds, while the second day comprises two processions – one on land and one on water. The former has people parading through the streets in colourful costumes, some dressed as characters, some as lion dancers, plus some actual musicians. Two mikoshi (portable shrines) are also brought through the streets to the Okawa River. Then, in the evening, the shrines are loaded onto boats and the procession moves onto the water, with special performance boats floating down the river and a fireworks display.

Why go?
The procession along Okawa River makes this festival unique –  you can watch from the riverside as boats carrying noh (classical Japanese theatre) and bunraku (puppetry) performers sail past. The river is also lined with food and drink stalls.

When is it?
The festival is scheduled for July 24 and 25 every year. The main festivities happen on the second day, including the street parade, the procession on the river, as well as a climatic fireworks show.

What is it?
The Karatsu Kunchi Festival takes place in the city of Karatsu in Saga prefecture, just southwest of Fukuoka. This autumn event celebrates a bountiful harvest season and sees large hikiyama floats being paraded down the streets from Karatsu Shrine all the way to Nishino Beach. This is definitely one of the more photogenic festivals – the detailed floats can take up to three years to make and are even embellished with gold and silver. The first evening of the festival sees the large hikiyama strung with lanterns and paraded down the brightly-lit streets.

Why go?
The floats used in this festival are unlike any others you’ll see around Japan. Some are 7m tall and come in impressive shapes such as lions, colourful fish and even flying dragons.

When is it?
The festival takes place from November 2 to 4. If you can’t make it to the festival, Karatsu is still worth a visit: the iconic floats are displayed at an exhibition hall the rest of the year. 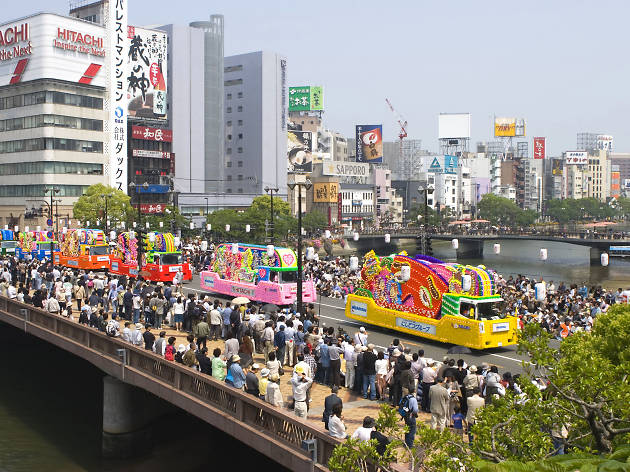 What is it?
The Hakata Dontaku Matsuri in Fukuoka is Japan’s largest festival over the Golden Week holidays in May. A staggering 30,000 people take part and the festival culminates in two massive parades known as the Hakata Matsubayashi that travel through the streets of Fukuoka. Celebrated for over 800 years, the two-day festival sees locals from Fukuoka and the Kyushu area perform dances down the city streets, complete with marching bands. Participants are usually dressed in bright, traditional costumes, and there are also six large floats, called hana jidosha, that are covered with fresh flowers and driven through the procession. There’s no better time to show off your smooth moves as the final evening encourages everyone to participate in the dancing to bring the festival to a close.

Why go?
This festival is worth the trip to Fukuoka: besides the big parades, there are live performances on stages all over the city, as well as the mouthwatering food and drink stalls. Don't forget the fringe events near the Hakata Port.

When is it?
The festival takes place on May 3 and 4 every year over the Golden Week holidays. 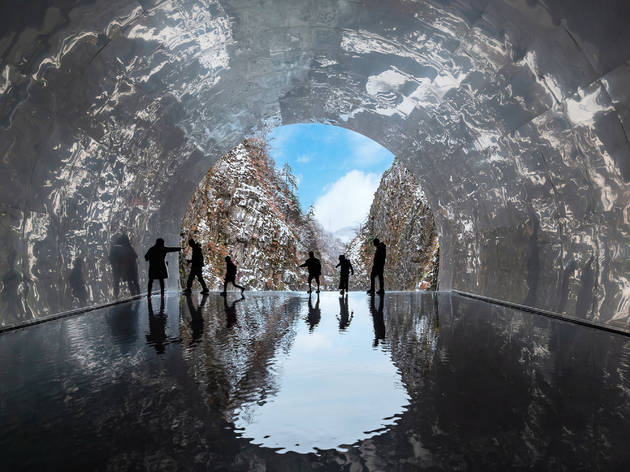 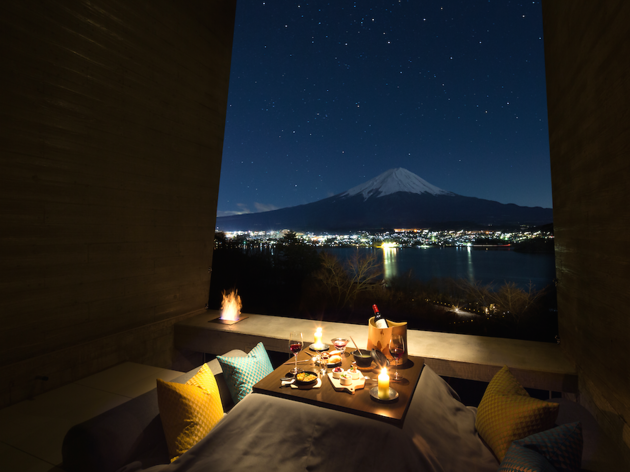 From historical Kyoto to snowy Niseko, these cool hotels, resorts and ryokan will have you dreaming of a holiday in Japan 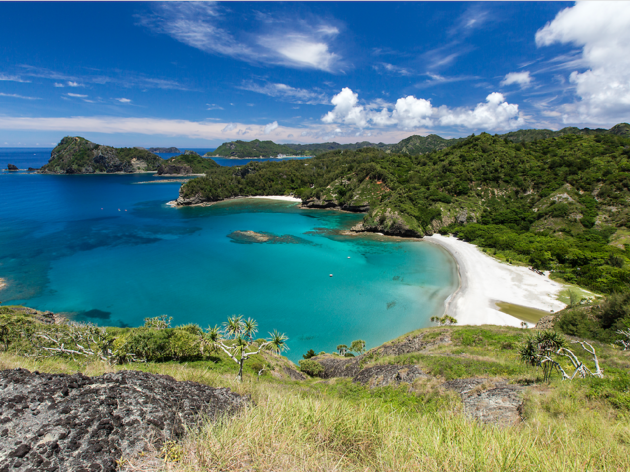