The 15 best restaurants in Tucson

In 2015 Tucson became a World City of Gastronomy thanks to UNESCO. The official designation confirmed what Tucsonans already knew: that the city knows how to feed its people and the city's people love to eat. After all, Tucson’s agricultural history stretches back 4,000 years, the longest of any city in North America. Because of its unique positioning just 60 miles north of the US/Mexico border, the area features an abundance of Mexican fare but also celebrates the diversity of residents, who hail from all over the world and shape not only the culinary scene but the variety of things to do around town.

In addition to the variety of flavors on local menus, you'll find a dedication in Tucson to preserving heritage seeds and growing heritage produce, one of the main reasons the city received the UNESCO designation. Gastronomical purveyors are similarly committed to buying their ingredients from local producers as well and to celebrating local foods on their menus with items like prickly pear iced tea and nopales fries—and you should make a point of tasting them all. Without further ado, here are the best restaurants in Tucson.

What is it: Considered by many to serve the best tacos in the city, Boca Tacos y Tequila offers 20 varieties of the food: from traditional standards (carne asada and pescado) to more eclectic options (AM taco with hash browns and an egg or a taco with honey mustard-marinated tofu).

Why go: For the salsas! Chef Maria José Mazon is constantly inventing new flavor profiles and she serves five different salsas with your tacos or chips at any given moment. Past options have included ones made with blueberry, balsamic vinaigrette, basil and even Girl Scout cookies. Chips are fried to order and come to the table piping hot.

What is it: Chef John Martinez worked in kitchens from New York City to Scottsdale, Arizona, before lighting “The Inferno” at this midtown Tucson restaurant with a mid-century modern vibe. Most foods begin or end on the grill, where the heat is so intense staff dip their hands and arms in ice water to cool down as they work.

Why go: This is some of the best grilled food you’ll ever taste! Start with the signature Queso Fundido, a combination cheese, house-made chorizo, and sautéed mushrooms heated over the coals until it bubbles and served with tortillas. Then, dig into grill octopus, NY strip or nightly special. Plenty of gluten-free and vegetarian options are available, too.

What is it: Cup Café is in the historic Hotel Congress in downtown Tucson. Order the cast iron baked eggs served with ham, leeks and gruyere cheese to start your morning off right, or the delicious drunken fish tacos later in the day. The award-winning breads and baguettes from Barrio Bread compliment any meal.

Why go: Sit on the patio at the very place where notorious criminal John Dillinger was tracked down while hiding out in 1934. After dinner, wander down the hall to Club Congress, a hotspot for Tucson nightlife, showcasing bands and DJs. You can also opt to sip on a beer in the adjoined taproom adorned with cowboy art, a Wurlitzer jukebox and home to a selection of local brews.

What is it: Nearly 30 years ago, Amanuel Gebremariam opened Ethiopian restaurant Zemam’s in a small rented house that he converted into a restaurant. The eatery is named after his mother, whose recipes were the inspiration for the menu. After the original's success, Gebremariam added a second location to his roster: Zemam’s, Too.

Why go: Zemam serves a wide selection of vegetarian and meat dishes on a shareable platter with injera flatbread (diners with allergies can per-order a gluten-free variety of the flatbread). People stop by to enjoy the space’s coziness as well. Want to bring your own bottle? The staff will uncork it for you for just $3.00. 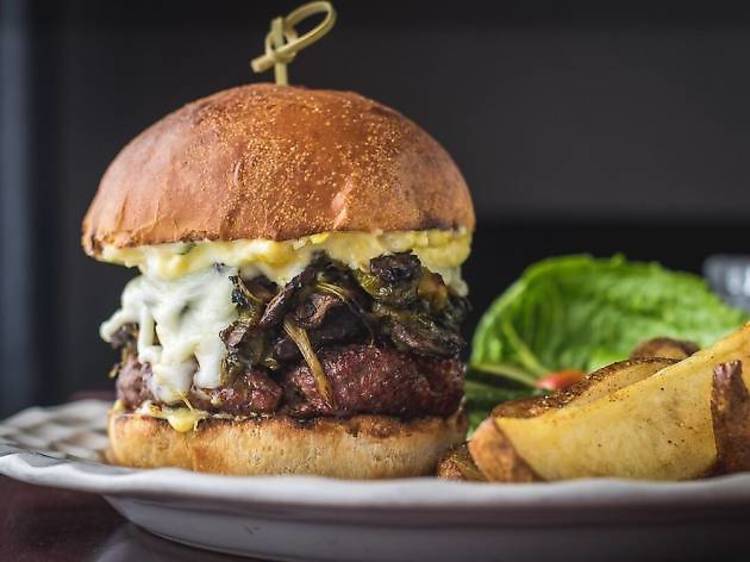 What is it: Discover Parisian elegance and seasonally-inspired rustic European cooking just a short walk from downtown Tucson.

Why go: The Coronet radiates elegance, from the ornate iron archway that invites you onto the patio to the tiled mint and black floor bar. A favorite brunch spot, The Coronet serves decadent dishes like eggs Florentine that go down nicely with mimosas or orange blossoms. The restaurant's adjacent pub, The Nightjar, opens in September 2021.

What it is: Located in the MSA Annex, a sleek complex of modified shipping containers, Kukai satisfies local cravings for ramen, rice bowls and sushi.

Why go: Chef Michael McCormack spent 10 years in the Japanese food industry before opening what is considered the best ramen restaurant in Tucson. It starts with a base of Hakata-style broth, which relies exclusively on pork instead of the pork and chicken combination favored in other styles, then adds ranging from chashu pork to seaweed and cod roe. The sushi menu is limited but features fresh seafood and traditional combinations.

What is it: A fresh-looking Mexican joint with branches in Mercado San Augustin and Joesler Village. Seis Kitchen is open for breakfast, lunch and dinner.

Why go: For some authentic, regional Mexican grub, head to Seis Kitchen. Here you'll find dishes like cochinita pibil (slow-roasted pork from Yucatan), birria (beef stew from Jalisco) and tinga de pollo (smoky chipotle chicken from Puebla). Grab their fresh juice of the day too, which ranges from tamarind and pineapple to homemade horchata.

What is it: Set at a five-pointed intersection across from the former “Ugly But Honest” car shop location and Five Points Flowers is the 5 Points Market & Restaurant. The staff’s commitment to using local ingredients makes this a beloved destination for both locals and tourists for breakfast, brunch and lunch.

Why go: Sit outside on the patio and soak in the sun or opt for the indoor section and take in the artwork made by a rotation of local artists. In addition to daily specials, the staff serves a selection of delicious desserts. Have one with the turmeric-infused golden milk. You are guaranteed to love it.

What it is: A collaboration between celebrated Tucson chefs Devon Sanner and Mat Cable, this restaurant specializes in pasta and pizza with a Sonoran twist.

Why go: The bold, flavorful dishes on the menu are unlike any you’ll find anywhere else in Tucson or the state, for that matter. Try the Lasagne Sonorense, made with chorizo, red chile sauce and chile con queso or one of the creative pizzas like the Prickly Pickle featuring nopales (cactus) and cholla buds.

What is it: The Little One is an offshoot of the very popular upscale restaurant Café Poca Cosa—each is managed by a different Davila sister. Sandra runs The Little One, where she serves Mexican food with a twist, offering diners a fresh, unique flavor palette in a down-home environment. A warning: the restaurant only accepts cash.

Why go: The Little One is open for breakfast and lunch on weekdays and their specials, many of them featuring fire-roasted veggies, change daily. Try one of the aqua frescas they make to order every day like the ginger, jalepeno and mint flavors. Oh, they won’t let you leave until they give you an "air" hug, hopefully to be replaced by the real deal once the pandemic is over. It’s like being at your auntie’s house—you know, the one who can really cook.

What is it: Seafood in the desert? At the Kingfisher, absolutely! The seafood here is always fresh and the menu rivals top-notch seafood spots in coastal cities. Try the macadamia nut crushed Hawaiian and one of the hand-crafted cocktails like the “Every Cactus Has Its Thorn.”

Why go: The dim lighting and rounded leather booths will make you feel like you stepped on the set of Mad Men. It’s a great spot for date night or for a group celebration.

What it is: James Beard semi-finalist Don Guerra of Barrio Bread and chef Carlotta Flores of the El Charro teamed up for this grab-and-go restaurant that features house-made, artisan breads, traditional tamales and fresh, local ingredients in its soups and salads.

Why go: Start the day with Carlotta’s Catalina Tamale Plate (two eggs over easy served with a tamale) or Barrio Hollywood Toast (toast topped with refried beans, smashed avocado, pico salsa and melted Mexican cheeses) with a cup of sweet, cinnamony café de la olla. Sandwiches, like the El Presidio made with chicken tinga, reign supreme at lunch. Although the space is mainly designed for takeout, there are a few tables inside and on the small patio.

What it is: Opened in 2018, this fast casual noodle house now has two locations: the original on Grant Road and a second in Plaza Escondida.

Why go: The staff hand pulls the noodles that go into the nearly dozen dishes featuring them, some with broth, some without. Start the meal with pan-fried, steamed or ChaoShou dumplings before diving into the noodles or a rice plate topped with meat and served with bok choy. Admittedly, it lacks atmosphere and you have to order at the counter, but you won’t mind as soon you take the first bite.

What is it: Arguably the best pizza in town, the thin-crust deliciousness comes with a variety of toppings, from ricotta to pickled fresno chile and even Yukon gold potatoes. Tell the bartender which spirits you usually fancy and he’ll make you a delicious cocktail to boot.

Why go: Once Reilly Funeral Home, the space, now renovated, is fit with vaulted ceilings, exposed brick walls, hardwood floors and antique chandeliers that add to the overall pastoral elegance. After eating, sit outside in the beer garden or head downstairs to the Tough Luck Club, a speakeasy-inspired bar with a stone wall, black leather booths and a rustic wooden bar.

What is it: Taqueria Pico De Gallo is a Tucson institution and the best local place for tacos (which is saying a lot!). Step inside the marigold building and up to the counter to order the carne asada, fish and chicken tacos made with mouth-watering thick homemade corn tortillas.

Why go: In the summertime, stop by for a raspados—shaved ice covered with fresh fruit and ice cream—or order a refreshing horchata.