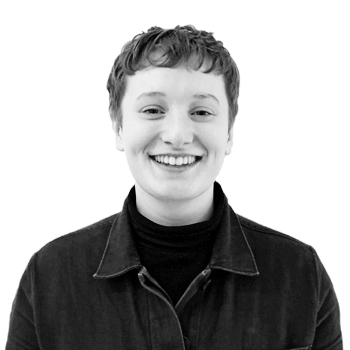 We won’t beat around the bush; ghosts are very, very scary. We’re not talking about friendly ghouls such as ol’ Casper, oh no, we’re talking about nightmarish spirits that wander the streets at night, seeking solace and spooks in equal measure. The United Kingdom is a terrifying place at the best of times, and its abundance of ghost towns only accentuates that fact.

Yes, ghost towns. That doesn’t mean slightly weird but functioning towns where Scooby-Doo and co solve mysteries. It means deserted and forgotten areas that simmer with sinister tension, where communities stand vacant and the only movement comes from local wildlife, you and your imagination. Oh, and all the ghosts, but that could be your imagination.

These are the spookiest ghost towns in the UK, and the word ‘spookiest’ shouldn't make this seem cartoonish. Time is undefeated, after all, and the UK is full of areas that tapped out long ago, from medieval settlements to villages evacuated in wartime via flooded communities and the distressing malaise of life after an industrial decline. Do not come alone. 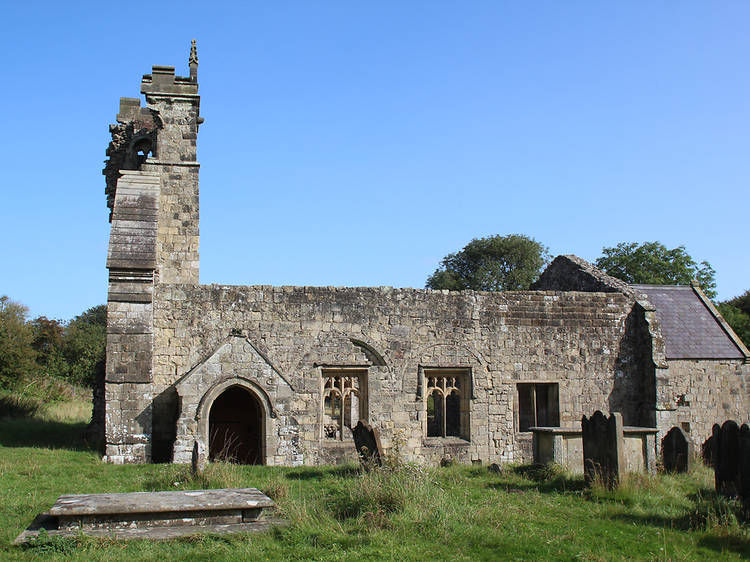 There are over 3000 known sites of deserted medieval villages across the UK, but Wharram Percy is one of the largest and best known. While many DMVs are now only identifiable by crop marks and other archaeological features, the North Yorkshire village is remarkably well preserved, having been faithfully excavated over 60 years using pioneering archaeological techniques.

Mentioned in the Domesday Book in 1086 and abandoned soon after 1500, all that remains of the village today are the ruins of its church and millpond, but the outlines of around 40 lost peasant houses can be traced by visitors to the English Heritage-owned site perched on a scenic valley in the Yorkshire Wolds. 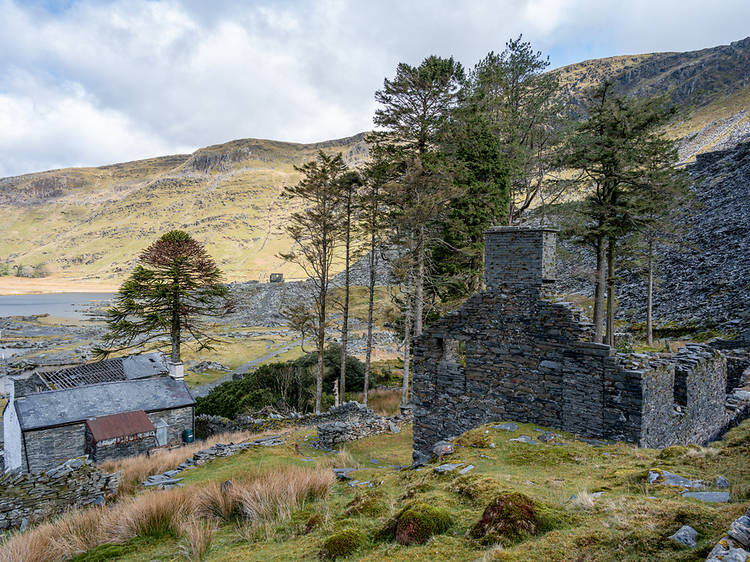 On the edge of an abandoned slate quarry in the remote and picturesque valleys of North Wales stand the haunting ruins of Cwmorthin. Established as early as the 11th century as a farming village, it expanded to house working-class families during the 19th-century slate boom but gradually declined after the closure of the quarry in 1939.

Now, all that can be found nestled in the Snowdonia valley are the empty shells of a few quarry buildings and the crumbling walls of an old farmstead, whose last inhabitant died in 1860 and claimed that the farm had been in his family for an astonishing 800 years. 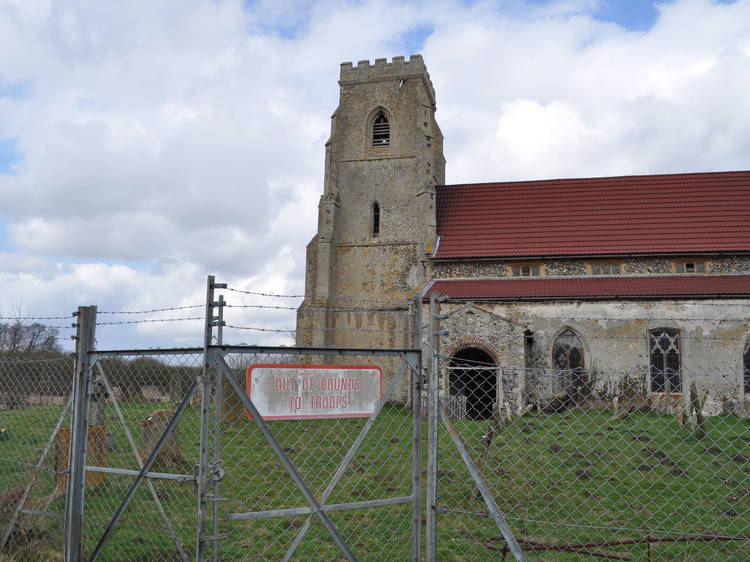 In 1942 as the Second World War raged on, six small villages in the Stanford area of Norfolk were evacuated by the British Army to create a pretend battleground used to train troops being deployed in Europe. Despite the huge sacrifices they made for the war effort, the 500 or so inhabitants of Buckenham Tofts, Langford, Stanford, Sturston, Tottington and West Tofts were never allowed to return.

What is now known as the Stanford Training Area (or STANTA) has been used as a filming location for the sitcom Dad’s Army and in the preparations for every major British Army deployment since WW2. As a live firing area, civilian access to the abandoned site is only granted for a small number of tours each year. Probably for the best. 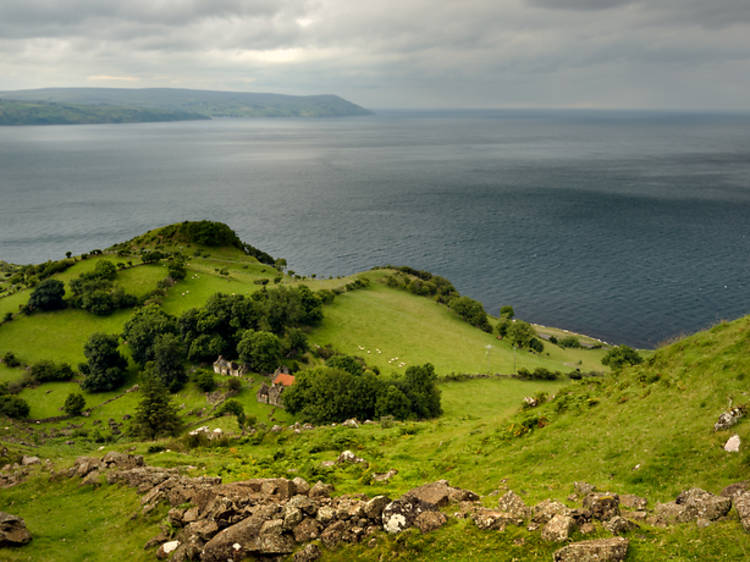 Hidden in a remote spot above the glens of County Antrim and accessible only on foot is the tiny abandoned village of Galboly, a community of ten houses nestled in a spectacular landscape overlooking the mountains and sea. Despite seeming like a land that time forgot, a small community lived in the village until as late as the 1950s and a Cistercian monk inhabited one of the last standing cottages until his death in 2013.

More recently, Galboly stood in for the fictional village of Runestone in Game of Thrones, and fans of the show do occasionally pay a visit to the forgotten little village on tours of Northern Ireland’s many GOT filming locations. 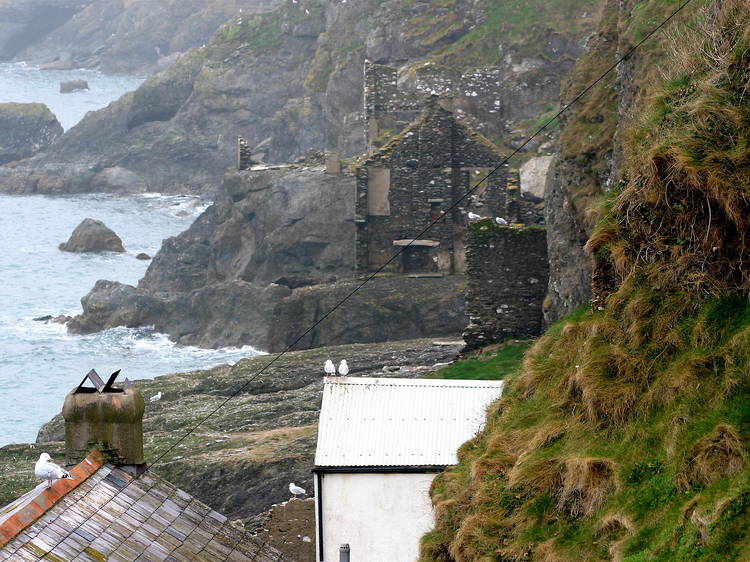 This former fishing village on the coast of South Devon was home to 128 people before January 1917, when a total of 29 homes were felled by a strong easterly wind and an extremely high tide. It took just two stormy nights for the entire village to disappear, though the disaster was years in the making, having been caused by the removal of shingle from the local beaches to provide construction materials for a nearby naval dock.

These days, all that remains of the once-thriving community are the stone walls of a few ruined houses. You can get a good look at the wrecks from a platform above the site, which itself has had to be rebuilt thanks to damage from coastal erosion. When will we learn? 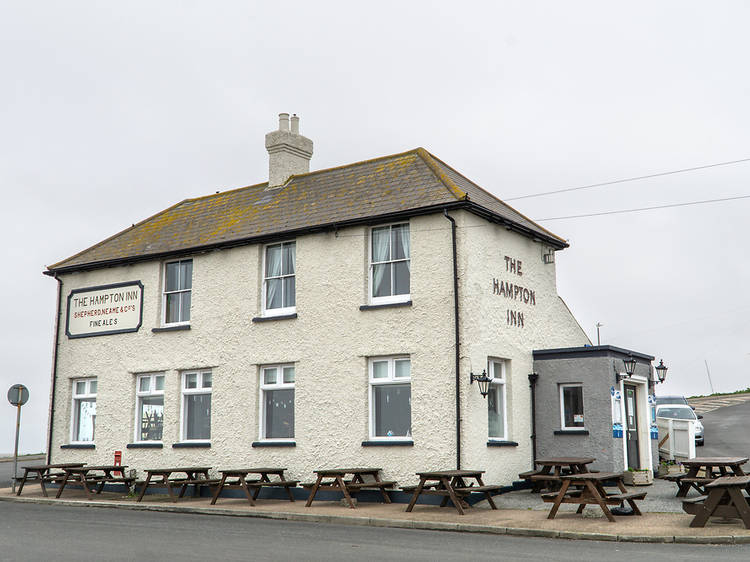 Yet another victim of coastal erosion, Hampton was a modest oyster-fishing village that sprung up on the Kent coast in the late nineteenth century. Abandoned in 1916, Hampton-on-Sea had become Hampton-in-Sea by 1921, by which time the entire village had crumbled into the ocean.

Today the only evidence of its existence is the local boozer the Hampton Inn, a small section of pier visible at low tide and the rocky ruins of its clearly not very successful sea defences. 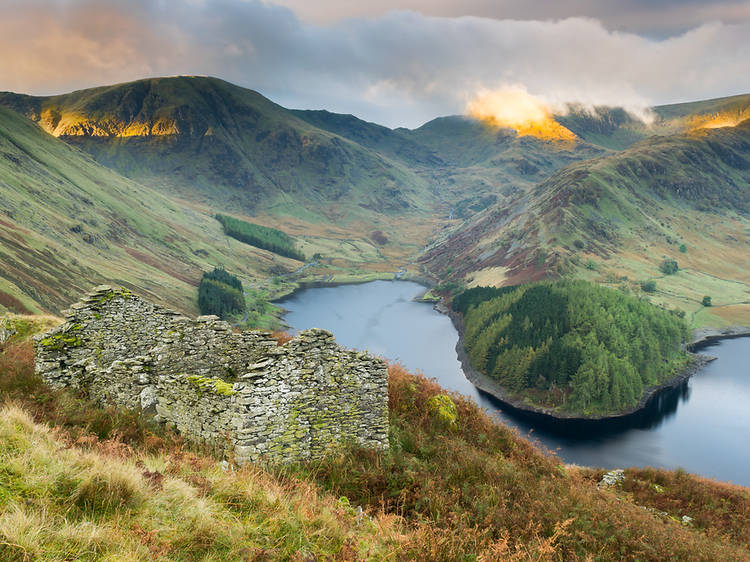 One of several small villages across the UK that have been sacrificed to make way for reservoirs servicing nearby cities, the ancient hamlet of Mardale Green was once found within the Mardale glacial valley, but was submerged in the 1930s during the creation of the Haweswater Reservoir by the Manchester Corporation.

Though most of the buildings in the village were blown up beforehand, people flock to the reservoir in the east of the Lake District to see their ruins during especially hot summers when the water runs low. 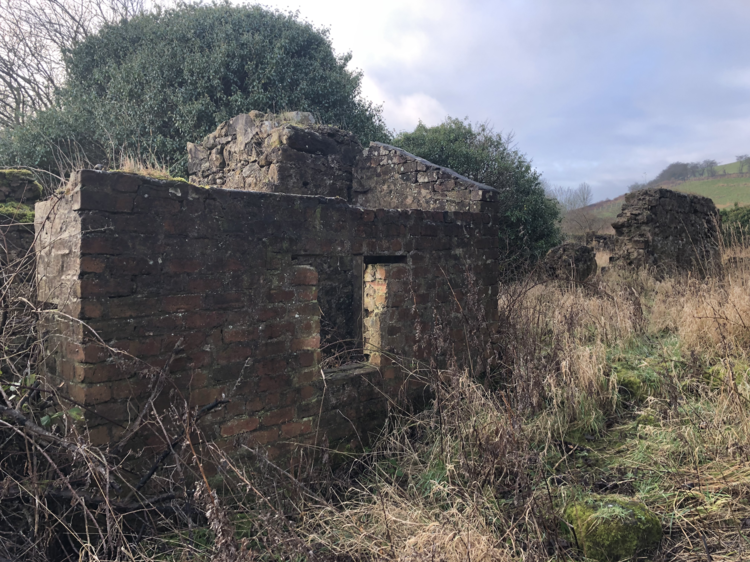 Established in the early 1880s during the short-lived boom of the nearby Burntisland Oil Works, the village of Binnend in Fife housed several hundred workers and their families but fell into decline at the turn of the century when the factory experienced financial difficulties and made its employees redundant.

Binnend officially met its end in 1931 due to the fact it had no piped water, gas, electricity or sanitation, although two couples stubbornly stayed on until the 1950s. Nowadays only the eerie ruins of the small neighbourhood of High Binn remain, overgrown with moss and brambles, a testament to Scotland’s industrial decline. Bleak. 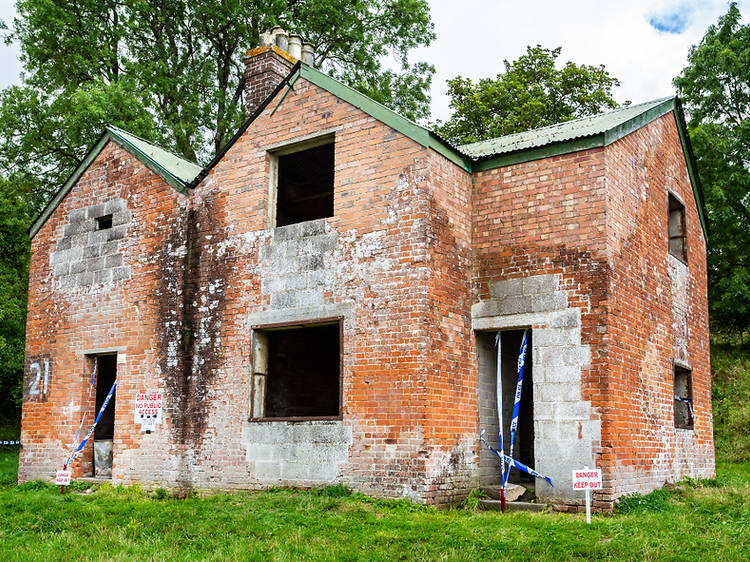 This sleepy village in the middle of Wiltshire’s Salisbury Plain was another victim of the Second World War effort when its residents were given just 47 days' notice that they were being forcibly removed to make way for army training in November 1943.

Although the population of 135 were told they would be able to return after six months, Imber remains in control of the British Army and is only open to the public for the occasional bank holiday and an annual service at the village church, St Giles. These days the once quaint little settlement looks like the set of a disaster movie, with many of its buildings showing evidence of shell and explosion damage from decades of military exercises. 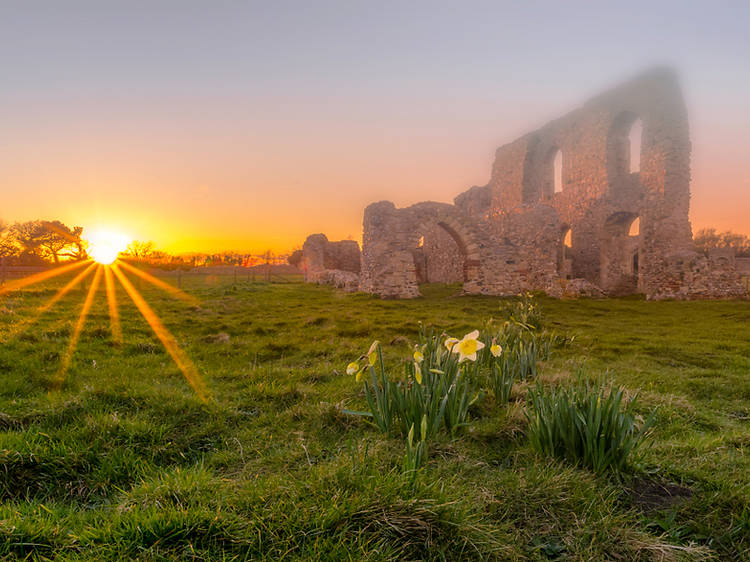 In Anglo-Saxon times, this once-mighty settlement was the capital of the Kingdom of the Eastern Angles. An international port and a seat of power for bishops, it is listed in the Domesday Book as having a population of over 3,000, but began to decline in the thirteenth century, with many of its buildings swept away in a series of major storms that hit the east coast in the 1280s.

By 1362 some 400 houses and eight churches had been swept into the sea, and today only the ruins of Greyfriars Franciscan Priory and St James Leper Hospital remain. Suffolk legend has it that church bells can occasionally still be heard ringing from beneath the waves. Spooky.