The 18 best restaurants in York

Looking for a brilliant place to eat? These are the best restaurants in York, rated by our local experts

York is of course known for its rich history and culture, but alongside this it also stands as being a serious foodie destination in the UK. It boasts an eclectic array of restaurants, ranging from traditional tea rooms to globally-inspired and award-winning fine-dining. Each of the city’s ‘gates’ come with its own distinctive food offering. Castlegate is where to head for touristy bistros right next to the castle (a can’t-miss thing to do in York). Casual lunch options abound on Fossgate and Walmgate. And Gillygate offers a slew of brilliant low-key cafés largely free of the tourist hordes. Spark:York and the Shambles markets are burgeoning street food hubs, while Micklegate has been revitalised as York’s most exciting area if you’re into your independent eateries. Just as the city’s bars and pubs go big on diversity, there really is something to suit every taste in our pick of the best restaurants in York.

RECOMMENDED:
The best Airbnbs in York
The best York hotels 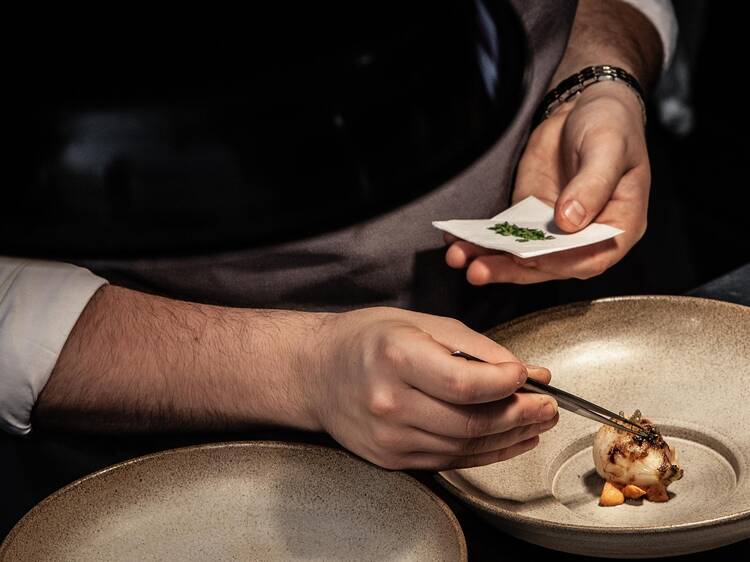 What is it? A very plush Michelin Star restaurant.

Why go? For a super fancy dinner. This place is overseen by award-winning, two Michelin-starred chef Tommy Banks, so you know you’re in good hands. The restaurant offers a seasonal farm-to-table tasting menu and is housed in a building stretching back to the 1800s. It is a celebration of its farming roots, hence the name, so expect a heavy focus on local and seasonal produce, all centred around contemporary British cuisine. 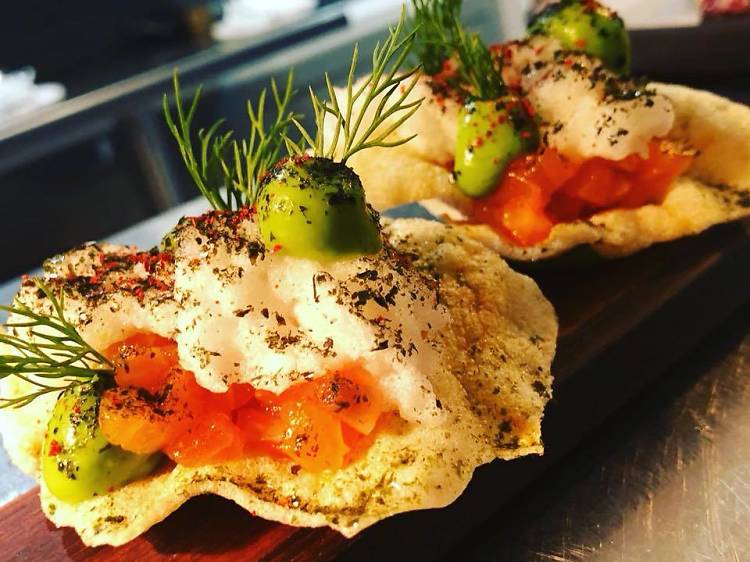 What is it? Take a seat at the swish stainless steel bar (if there’s space) and watch as the chefs create dishes incorporating influences from all over the world. From the Middle East to Spain, Japan to the US, this place takes global cuisine and runs with it. Our top tip? Skosh is most famous for its glorious buttermilk fried chicken thighs with aerated hollandaise, so we recommend ordering two portions.

Why go? For a small-plates restaurant making a big impact.

What is it? There’s no menu here, per se – just tell the restaurant any dietary requirements you have and then enjoy as you’re served an impressive four or eight-course meal. Menus change according to the season, but the black pudding macaron is its signature. If you’re thirsty, sister venue and natural wine bar Cave du Cochon, down the road, is just as classy. 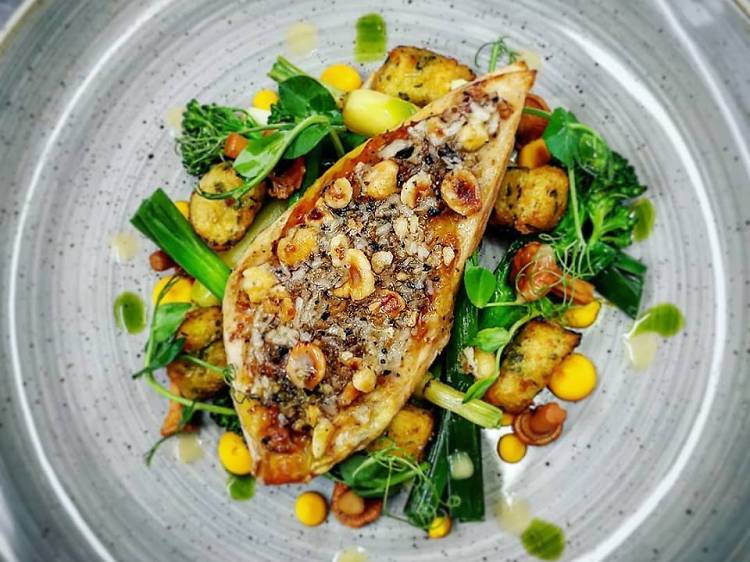 What is it? Run by chef Michael Hjort and wife Lucy, Melton’s is an intimate restaurant serving high-end European food. Hjort trained with the Rouxs, so his cooking is refined yet down-to-earth. If you get menu panic when faced with too many delish options, go for the five-course tasting menu.

Why go? Birthday? Date night? Just because? Find any reason you can to visit York’s renowned restaurant. 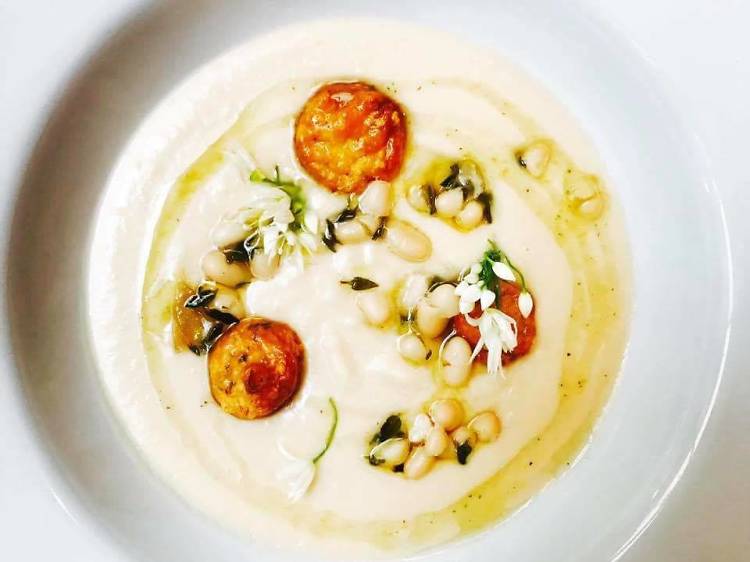 What is it? Lovingly restored with glass ceilings and the remains of a Roman road in the cellar, Rattle Owl is a charming neighbourhood restaurant. Head chef Jamie Hall plates food complete with everyone’s favourite aesthetic foodie phenomenon – edible flowers. The seasonal menu features Yorkshire asparagus and east coast crab.

Why go? To treat your date to dinner in a grade II-listed building. 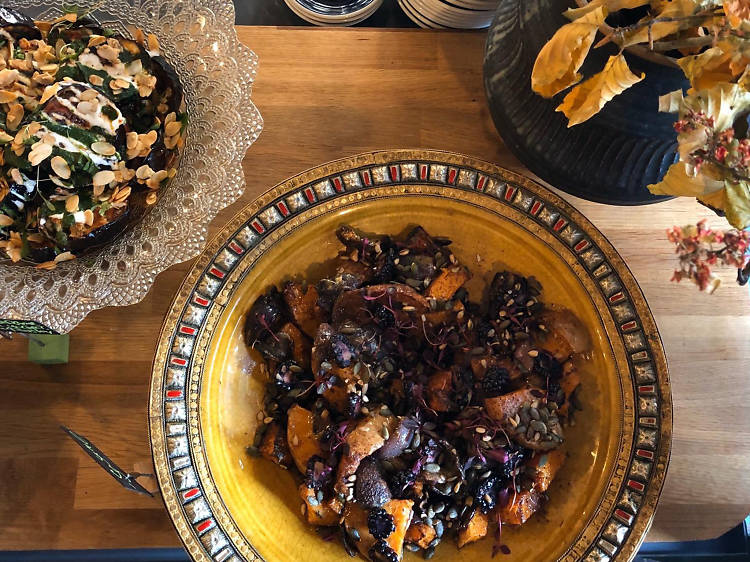 What is it? Run by Argentinian Florencia Clifford and her farmer husband Hugo, Partisan serves international food like ceviche, Persian breakfast eggs and beef bibimbap. It’s furnished by an antiques dealer and everything you see is for sale, which means the décor changes subtly each visit. Dinner is served three nights a week.

Why go? For an elegant lunch spot with good coffee and gorgeous interiors. 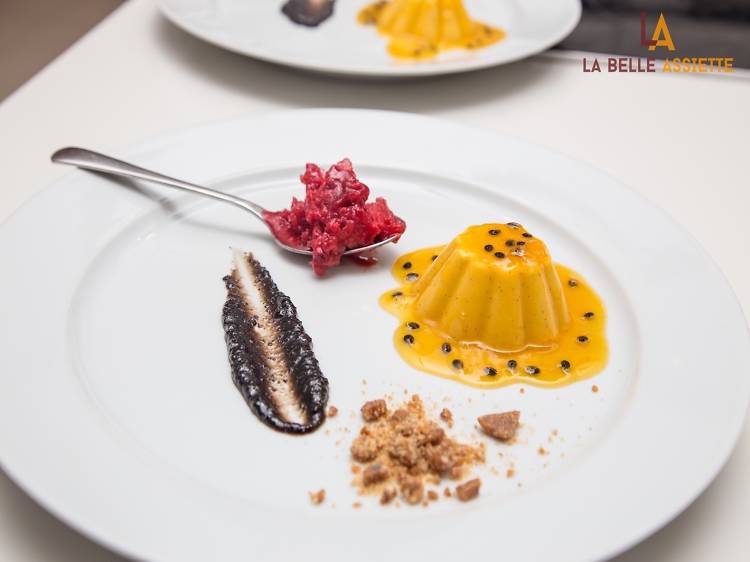 What is it? You’ll make new friends around the communal table at this four-course feast that takes place three times a month in Sara’s beautiful Victorian house, just a napkin’s throw from York Minster. Sara is a chef, cookery teacher and 2011 ‘MasterChef’ finalist who makes simple, elegant Italian food. 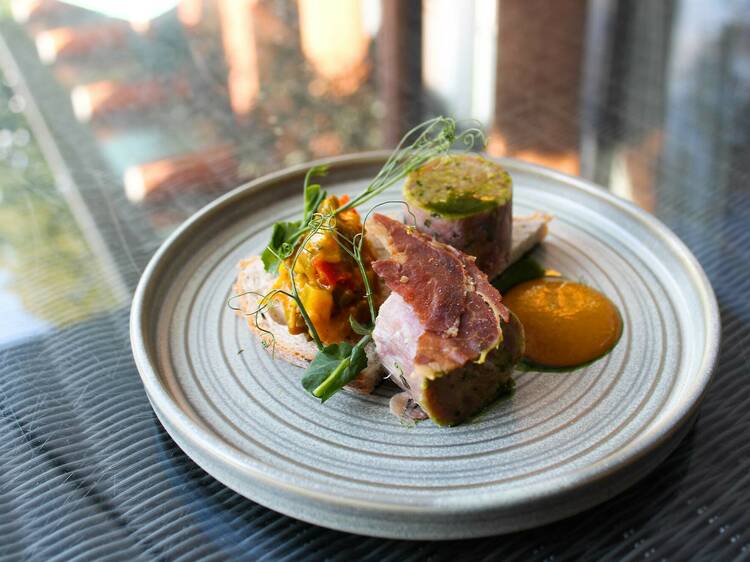 What is it? An award-winning Brasserie-style restaurant.

Why go? To enjoy the riverside terrace, as this restaurant is nestled on the banks of the River Ouse. Led by Andrew Pern of the Michelin-starred Star Inn at Harome, the restaurant has a focus on locally-sourced ingredients with the aim of bringing a taste of the countryside to the city. So expect to sample things like Yorkshire Venison or North Sea monkfish. It’s won multiple awards and features in various good eating guides, including the Michelin Guide. 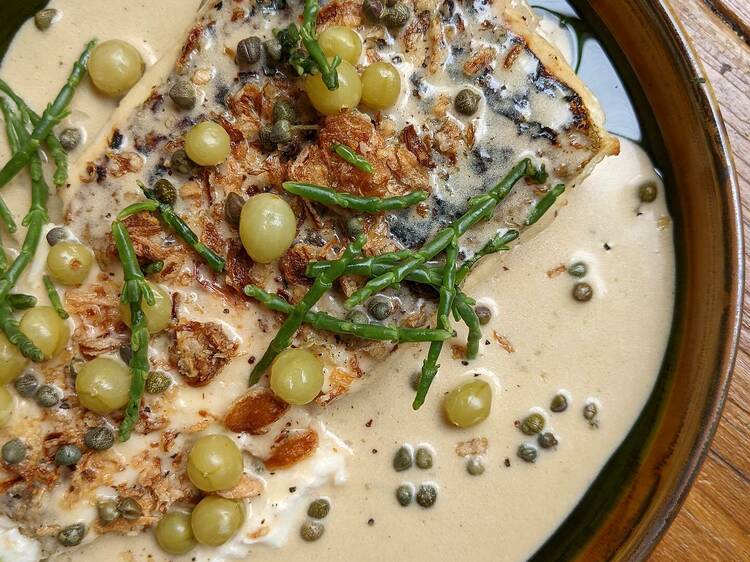 What is it? A bistro haven for fish and game lovers.

Why go? If you value sustainability on your plate. Here sustainable fish, game and foraged foods is the aim of the game. Taking inspiration from the sea, forest and Yorkshire countryside, a close relationship with local farmers and fisherman, as well as the chefs going out to forage for ingredients themselves, is key, so you’ll know exactly where everything you ate came from.  Founded by chef, Stephen Andrews, it only launched as a restaurant in 2020 but has been racking up awards and accolades ever since, including being recommended by the Michelin Guide. 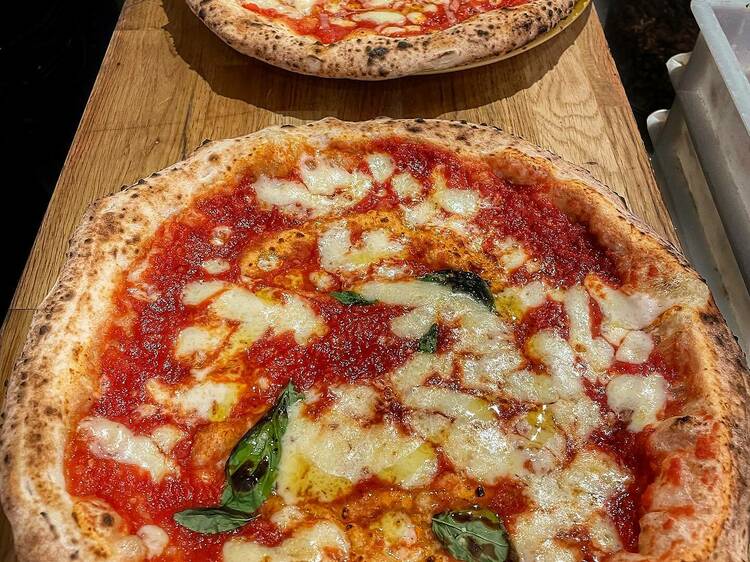 What is it? Certified traditional Neapolitan pizza.

Why go? To sample genuine Neapolitan pizza made with the same ingredients you would normally only in Italy. This pizza place was only the 8th in the entire country to receive the prestigious certification of the Association Verace Pizza Napoletana (True Neapolitan Pizza Certification). It’s only been open a couple of years but has become a staple in the city and for good reason. And like all the best, and most traditional, pizza places, you can get a marinara or margherita for very little money. 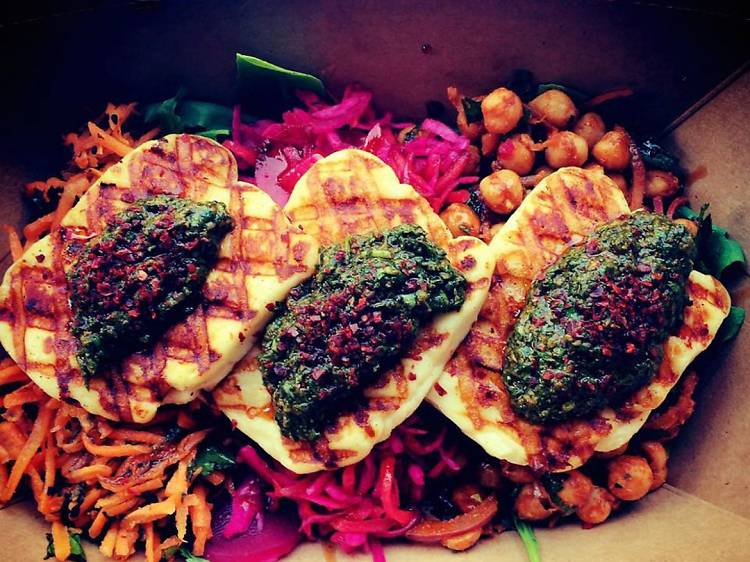 What is it? York’s historic market is crammed with arts, crafts and – most importantly – food. Los Moros is the one with the queues. Sole trader Tarik serves Levantine street food, including handmade merguez sausages, Persian saffron chicken wraps and Yorkshire halloumi with chermoula. And there’s free mint tea with every meal.

Why go? For post-shopping food at Shambles Market. 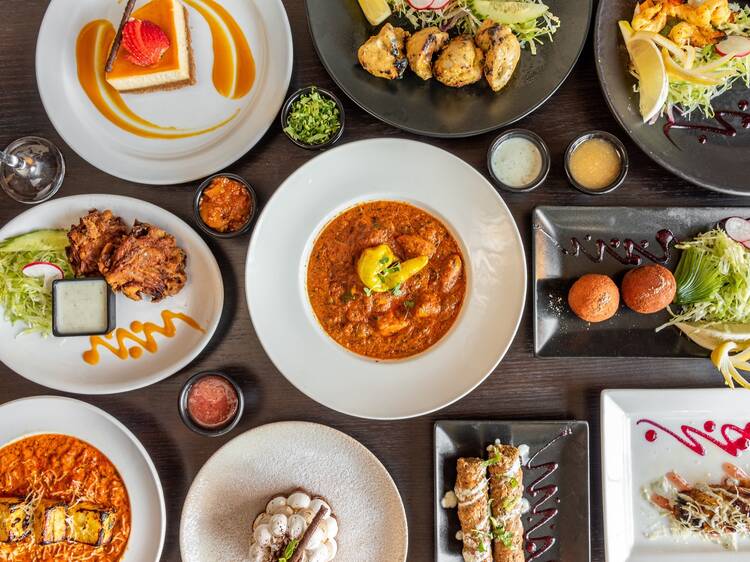 What is it? Authentic Indian grub with a modern twist.

Why go? To sample some of the city’s best Indian food. A place rich in heritage and history - it is named after India’s 29 states to capture the breadth and range of the country’s food and culture - but also with a heavy focus on the contemporary. On top of traditional dishes, Mughal, British and Portuguese influences can be found on the menu, making it a diverse and unique eating experience. 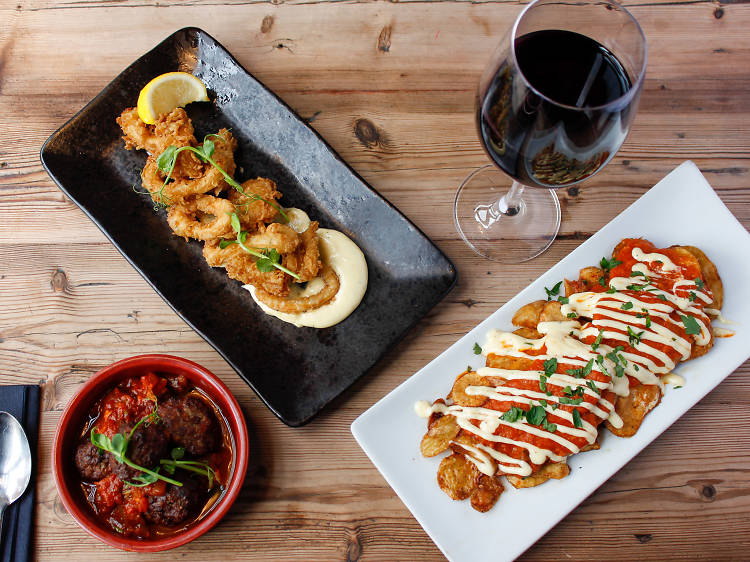 What is it? Two Tapas restaurants by York’s Fossgate and Goodramgate serving a fantastic array of dishes ranging from almond-stuffed dates wrapped in serrano ham to great big piles of fried seafood. Pair your plates with one of many top-notch beers or a glass of wine.

Why go? To get your fill of bite-sized Spanish treats. 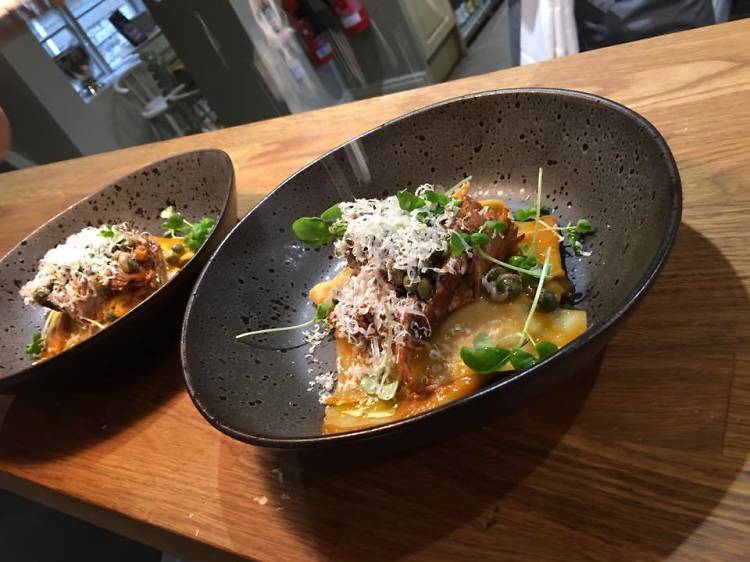 What is it? Originally a fruit and veg shop, Mannion’s is now a no-reservations café and deli with queues out the door. Portions are generous so order one of the ginormous platters to share. All bread is made in house and the Welsh rarebit is a cheesy revelation.

Why go? To rest your feet in a rustic-chic café with French- and Italian-inspired food. 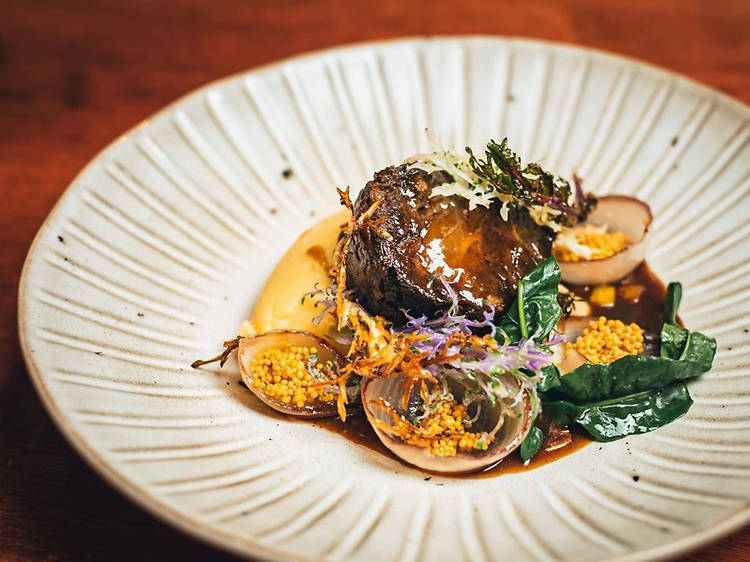 What is it? Excellent bistro-style food is the name of the game at this tiny restaurant on Gillygate next to York Minster. Fill your boots with a pre-tourist-trail fry-up, including bubble and squeak, or recover from your day’s sightseeing with a dinner of confit duck leg or gnocchi.

Why go? To eat with the locals at one of York’s most popular lunch spots. What is it? Pairings is a relaxed wine bar with impressive sharing boards, charcuterie platters and small plates to match the accessible wine flights and list. The tapas include whole basil burrata, Iberico Bellota ham and a cheeseboard. Save room for the chocolate and wine pairing for dessert.

Why go? For the wine. And the food.

What is it? Just around the corner from The Shambles on Castlegate, Rustique is the York’s finest French restaurant. Open for lunch and dinner every day, this heaving spot makes for the perfect mid-sightseeing break. Expect everything from crêpes to steak frites.