If you’re headed to Atlanta but need to spend a night or two without spending too much money, you’re actually in luck. Contrary to what you might think without having spent much time in the city, Atlanta is famous for affordability, at least when compared to other major U.S. cities. That means the hotel you think will cost you upwards of $300 or more for its nearby location to your area of choice could actually cost you less than $100, and yes, it’s totally safe. So if you’re willing to sacrifice some of the ritz and glamour of higher end lodging, there are more than a few options for spending less money while getting the full ATL experience. Use this guide to affordable Atlanta hotels next time you need to remain within a small budget but want to do it big in the capital city of the South.

The 10 best cheap hotels in Atlanta 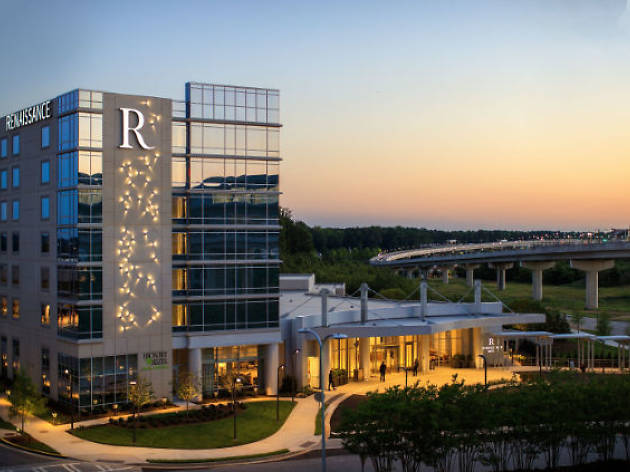 The term “airport” wasn’t always a term an Atlanta hotel wanted in its name. Yet this Marriott-affiliated hotel, rated as “Exceptional” on Booking.com, is exactly that, having opened in May with a party deejayed by hip-hop impresario (and College Park native) Jermaine Dupri, and a performance from R&B/pop singer (and Vanessa L. Williams’ daughter) Lion Babe. The up-to-date interior design of the lobby has the modernized feel of an Midtown ATL lodging establishment but nods to its aviation surroundings, including meeting rooms named after radiotelephonic alphabet terms like “Alpha”, “Bravo” and “Foxtrot” and Echo. Eat and drink at Hickory & Hazel Southern Table and Bar, which serves New-Orleans-meets-Atlanta cuisine including fried green tomato eggs Benedict, shrimp and grits, and BBQ brisket sandwiches, and has a “Bar Ritual” event four nights a week where you can enjoy complimentary punch. There are 204 rooms, including eight suites, each of which has its own custom mural from Atlanta artist Ryan Coman. 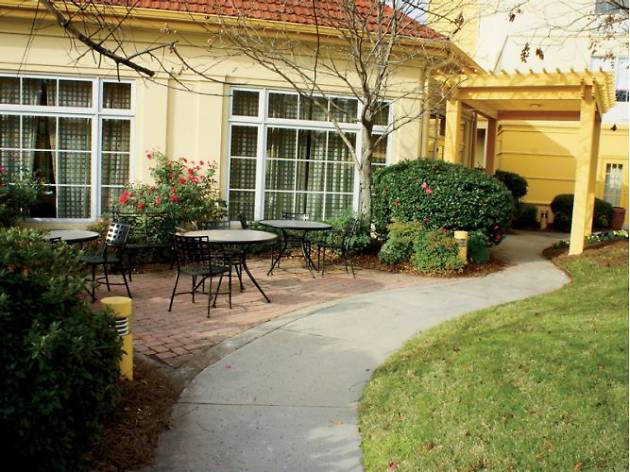 Having breakfast thrown in with your stay, along with free parking and high-speed Wi-Fi, an outdoor pool, quick access to major highways and interstates (Cobb Parkway / Hwy 41, I-75, I-285), and lots of shopping nearby whether you’re buying clothes at Cumberland Mall or picking up groceries at Publix. Local calls are also free in case you wanna brag to your friends who’d normally stay further east on Paces Ferry that you paid about half what they did for a perfectly good king suite or double bed. 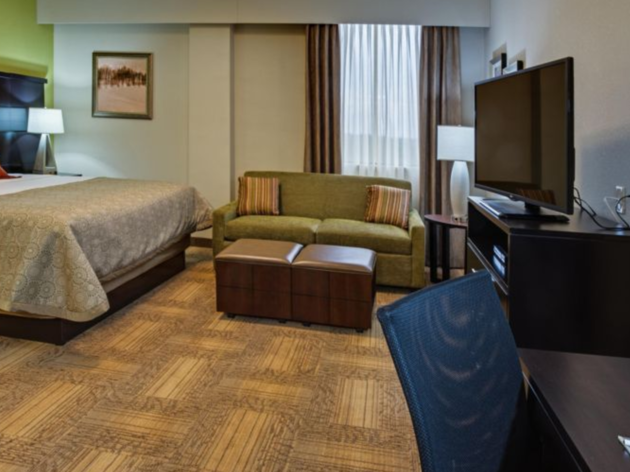 For $150 a night this clean extended-stay-style chain is a smart choice for spending three or more nights not far from Hartsfield-Jackson, especially if you're a budgeting biz traveler, or taking a  recreational trip with friends and family. All rooms have a full kitchen, and there's also free daily hot breakfast and a happy hour on weekday nights where you get a light meal (think pizza and sandwiches “light”) with a free beer or glass of wine. 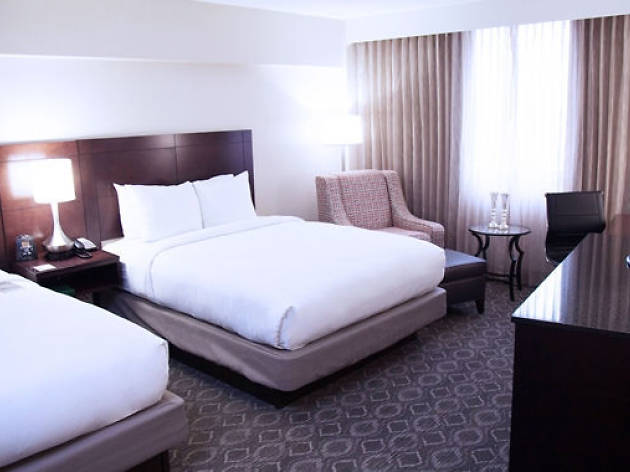 With 209 rooms behind a curved façade that towers over an outdoor pool, this North Druid Hills hotel recently underwent a multi-million-dollar renovation for an updated appeal and modern look. It has small and large meeting spaces (including a 972-square-foot room for conferences), mini-fridges and microwaves in all rooms, king rooms with sofa beds and a restaurant that serves breakfast and dinner, although you’re close enough to Buford Highway that you can catch a ride to some of Atlanta’s best and most authentic multicultural cuisine. 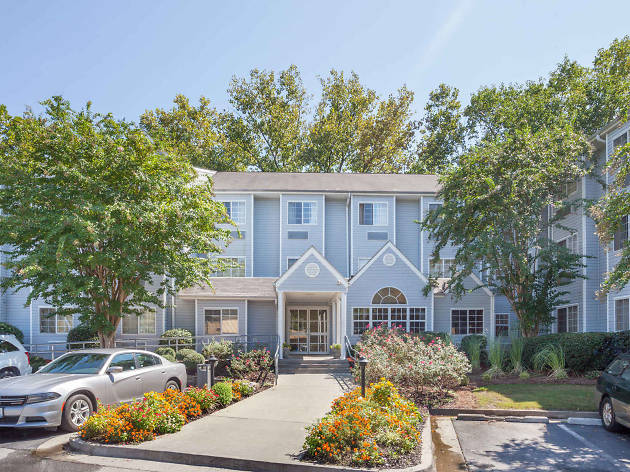 Buckhead is a fancy part of town, so stay at this Microtel and save that extra money to spend on shopping, dining and club-hopping -- you’ll need it. Not only do you get a clean room with earthtones-meet-pastels color schemes on simple designs, but you’ll also get a free continental breakfast that includes waffles, Danishes, cereals and more. It’s pet-friendly and has free Wi-Fi, and is in walking distance of a lot of great restaurants on Buford Highway, an international strip of road that leads to Duluth and takes you through a variety of cultures along the way (Mexican, Korean, Indian -- pretty much the whole planet). It’s also very close to Pink Pony in case you want to investigate Atlanta’s infamously exotic dance club scene, which as long as you’re old enough is completely PC in this town. 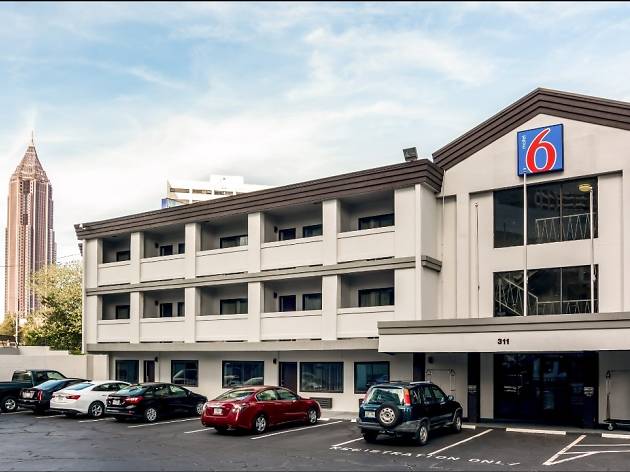 Sporting simple recent redecorations that put wood-like laminate floors against an aquatic paintjob in king bed rooms, along with a microwave and mini fridge, this Motel 6 puts you less than half a mile from two MARTA stations (Peachtree Center and Civic Center), the Peachtree Center mall (the food court’s decent enough), and the south-end beginning of Peachtree Street. Sure, there are much better neighborhoods for eating and drinking, but the free Wi-Fi and free parking are clutch for you to do a little research and personal investigation of places near the Courtland location. It’s definitely hard to be if you’ll be doing tourist stuff like World of Coca-Cola, Centennial Olympic Park, the College Football Hall of Fame and The Center for Civil and Human Rights. 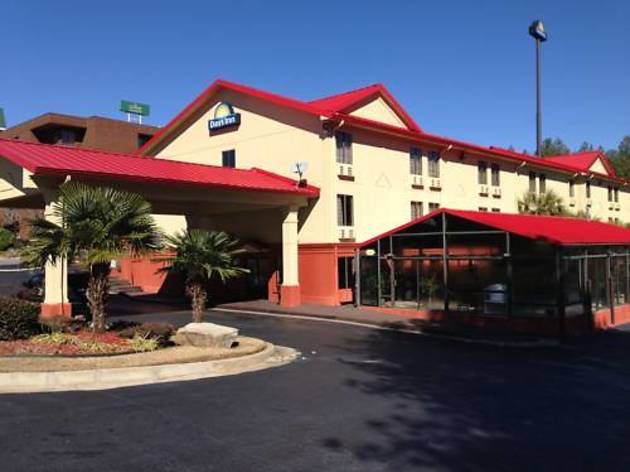 The orange roof and tan building looks a little bit like an actual orange, but that’s just a reminder to enjoy the juice that comes with the free continental breakfast each morning; it also features waffles, cereal, biscuits and gravy. Rooms have a contemporary, business-casual feel, and there’s also a year-round indoor pool and free Wi-Fi throughout the building. Don’t pick this if you’re relying on public transportation other than Uber or Lyft, but if you’re looking to spend a day watching the Braves, shopping or just hiding out after a corporate meeting near Marietta or the Cumberland area, you can’t do much better. Especially not for $85 per night. 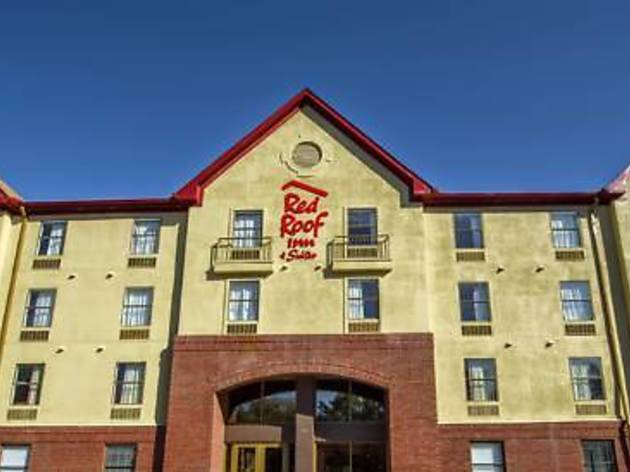 It’s certainly a little weird that The Ponce is actually two blocks away from Ponce de Leon Avenue, but nevermind such semantics. What’s really weird is that you can get a room in a Midtown hotel, with free parking, Wi-Fi, hardwood floors, surprisingly clean and contemporary rooms, and an enclosed courtyard, for less than $70. You might even luck up and get that single-bed room for under $60, depending on the date. That’s an “Old Ponce” rate, and you’d better jump on it before the next mayor decides to let someone build another Ponce City Market within walking distance. 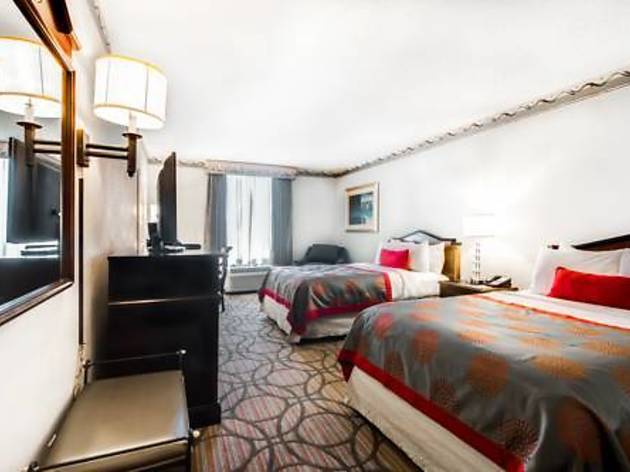 Hotels near Hartsfield-Jackson are known to be reasonable (for now, at least), but for a room hovering just under or over $70, you probably don’t expect a decent on-site restaurant serving breakfast, lunch and dinner, including a buffet. You probably also don’t expect a pool but here you have both indoor and outdoor options. There’s also free parking and Wi-Fi, and a shuttle gets you to the airport in three minutes. Why so inexpensive? Probably because it’s on Old National Highway, which has been mentioned in plenty of songs by famous Atlanta rappers, but don’t let stereotypes keep you from staying in a completely safe, well-run hotel that offers a comfortable night’s sleep on the southside for a great rate. 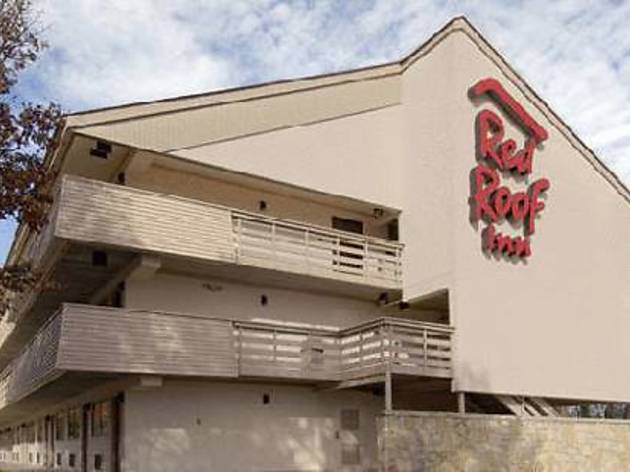 Spending less than $100 in Buckhead would in some situations amount to a sketchy, if not practically impossible outcome if you’re looking for a place to spend the night. Yet at around $90, and in some cases under $70, you’re getting a wood-like laminate floor (beats strange carpet anyday), along with a desk The location at the corner of Buford Highway and North Druid Hills makes this a great middle ground for proximity to shopping and eating (it’s just a six-minute drive north on Buford Hwy to Lee’s Bakery for amazing banh mi), as well as the weirdness of Cheshire Bridge and Buckhead’s dive bar culture. Get a comfortable standard room for $80 or so, or pay a few more bucks for a king bed room -- you’ll still be comfortably below $100 -- and they’ll throw in a microwave, mini fridge, a spa-styled bathroom and a free box of snacks.

Read review
Check prices
Get us in your inbox