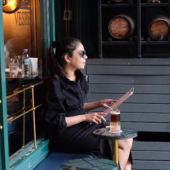 Bar regulars would surely have heard of Arron Grendon, the young mixologist who, despite being in the biz for only two years, has already bagged local and internatonal cocktail mixing awards. His unexpected win at the Thai edition of the Diplomatico World Tournament in 2017 intrigued the local mixology scene, most of whom had never heard of the rookie bartender prior to the competition.

A year after winning this local contest, the Hong Kong-born, Phuket-bred mixologist moved to Bangkok to join Swedish bartenders Sebastian de la Cruz and Philip Stefanescu at Tropic City, a gig that would prime him to becoming the first Thai winner of the 2018 Global Chivas Masters.

Here are a few things you should know about the award-winning mixologist.

There was one night we had an event where 28 Hongkong Street did a guest shift. I fell in love with [bartending] immediately just by seeing how they interacted with the guests. So after that I started out in the bar.

I never actually studied bartending. I had a month’s training in the bar, but that was how to mix signature drinks. It’s very rare for people to order classic cocktails in Phuket. So I had to read the basics myself, and [I learned] techniques literally just by opening YouTube videos of Marian Beke or Simone Caporale—all these famous bartenders. And I just had to practice every day.”

He won his first competition only after a few months behind the bar.

“After a few months behind the bar, there was the Diplomatico World Tournament. My boss said, ‘Have a go, try it. It’s your first competition so it doesn’t really matter what happens.’ So I joined. Then I made top two in southern Thailand and had to go to Bangkok to do the final. That was the first time I met all these ‘proper’ bartenders—Gov [Kitibordee gov Chortubtim], Fah Beer [Suchada Sopjaree], Mr. B [Attapon De-Silva], and Depp [Noppasate Hirunwathit]. It was a crazy experience in my first proper competition.

After that, Sebastian, who is a co-founder of Tropic City, and the judge of the Bangkok round for that competition, was told that I wanted to move to Bangkok. Because I know that if I don’t move to Bangkok I’d never grow as a bartender. Not because they don’t have a cocktail scene in Phuket but Bangkok is just on another level.”

He won the 2018 Global Chivas Masters two years after getting into mixology.

“There were 21 bartenders in the global finals, which is insane. When they announced me as [one of the] top three, I was shocked because I’d never expected to get in. The top three finalists had to lead the final challenge and, I thought to myself, ‘Who’s gonna listen to a 21-year-old?’ But the bartenders I met on the trip were just amazing. That’s why I like doing competitions: to meet these people. Even though you met them only five days ago, they already feel like family. It was an amazing experience winning a global competition. I’m happy that I represented Thailand.”

The Thai farming industry and hard work were the inspirations behind his winning drink.

“My drink was inspired by Thai farmers because my mother used to tell me not to waste food especially rice. The farmers work really hard in the hot sun all day. It’s just like us in a way. We do work hard, maybe not in the sun, but we stand long hours and we always have to be happy because if we’re not happy, the guest will not be happy.

For the ingredients, I used black sticky rice, coconut cream, which tastes a bit like yogurt because I added some citric acid into it, as well as sugar cane shrub, banana syrup and Fino sherry to go with Chivas Regal Extra. Chivas Regal Extra works really well with Thais, with all those spices and ginger at the end. But with Chivas Regal 12, you’ll get the vanilla and the woody notes, but not that much of spice. Chivas Regal Extra is finished in sherry casks, so I used Fino sherry to enhance the fruity and spicy notes. That’s where I got the inspiration for my drink. It’s called The Grind, which also means to push yourself to work harder to achieve all your goals.”

“Sustainability is trendy for the bar scene right now but it’s not something that should be just a trend. It’s actually the big issue in the world that people should realize that.”

It’s hospitality first for him.

“I’d say I’m a very hospitalitable person. I like to make people feel welcome. Whoever comes to see me will feel welcome. I’m quite fast at making drinks, too, and it helps a lot with Tropic City as we’re a high-volume bar.”

He believes that teamwork is the key to success.

At Chivas Masters, they have a very strong criteria that they want their bartenders to focus on— community, brotherhood and sustainability. That’s also the reason why they wanted the final challenge to be a team challenge because they don’t want one bartender to show off what he got, but rather see you work as a team. Because if you can lead a team and win, you can also achieve a lot more on your own. That’s what I learned the most from this trip— that if you have a good team and a good relationship you can achieve literally anything.