The 17 best Indian restaurants in Birmingham

Get your curry kick at one of Birmingham's best Indian restaurants, from Bombay-style street food to progressive fine dining

From Bombay-style street food and sweet centres to Gujarati vegetarian cafés and progressive Indian fine dining, Birmingham has it all when it comes to Indian cuisine. Long before any Michelin stars came to town, it was Birmingham’s Indian restaurants that lit up the gastronomic scene. Immigrants had brought curries of all sorts from the Indian subcontinent. Then, in the 1970s, a Pakistani genius from Sparkbrook invented the humble balti – a type of curry cooked in a pan known as a karahi – that many now consider the city’s trademark dish. The rest? History.

Fast-forward to the present, and there's a new generation of chefs taking the established tastes of the previous generation and putting a twenty-first-century twist on proceedings. So, if you’re already planning your next meal out in anticipation, here’s our round-up of the best Indian restaurants in Birmingham.

RECOMMENDED: Full guide to the best restaurants in Birmingham 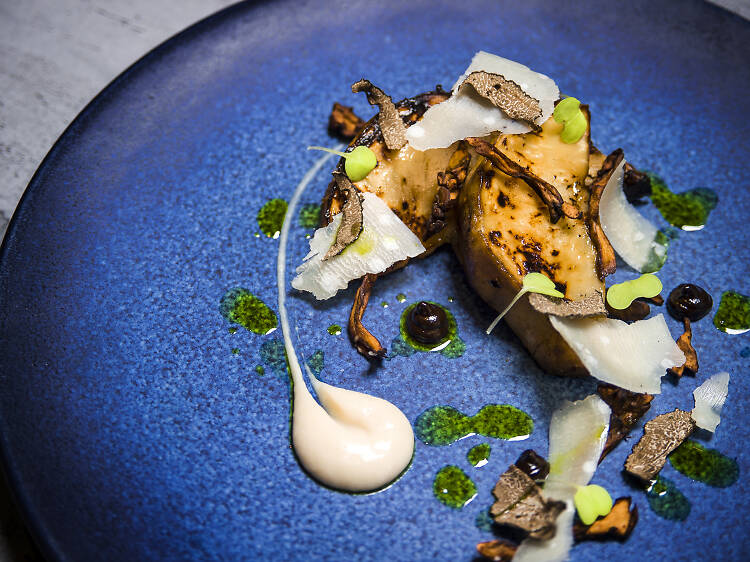 Birmingham superchef Aktar Islam is going for broke with this swanky progressive Indian restaurant on Summer Row. The former chef at Lasan – and an award-winning star of various TV shows – has pledged to ratchet Birmingham’s Indian fine-dining offering up a few notches with Opheem. From the stunning cherry blossom-decked bar to the bustling open kitchen, the emphasis is firmly on style and expression. And his stupefying reimaginings of Indian classics like laal maans and hyderabadi biryani are truly inspired. 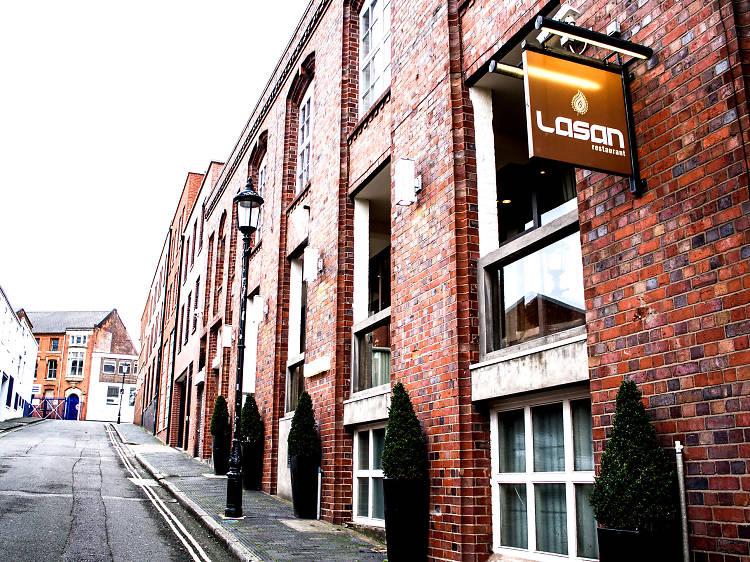 Possibly Birmingham’s best-known Indian restaurant, Lasan has ridden a wave of publicity ever since it was featured on Gordon Ramsay’s ‘The F Word’ in 2010 and is one of the showpieces of the city’s rich Indian food tradition. Lasan is tucked among the quaint Victorian buildings of Birmingham’s Jewellery Quarter, backing on to the leafy St Paul’s Square.

If you are looking for opulent fine Indian dining in the heart of Birmingham, then Varanasi is the place for you. Its surroundings are exquisite; dimly lit and borderline regal, the restaurant is highly intimate despite having 350 covers. Its meat dishes put an inspired twist on what one comes to expect from Indian cuisine: how about spiced smoky duck in pumpkin and yoghurt sauce, or deer, mushroom and spinach biryani? Don’t fear, there’s plenty of more conventional curries and tandoori for the less adventurous too. 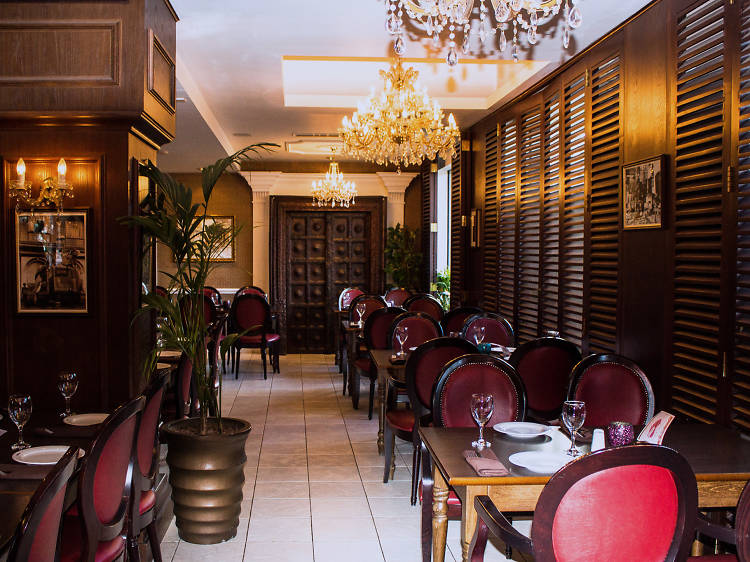 Birmingham has long been famous for its South Asian cuisine. However, there are a few restaurants that have risen above the crowd and carved out a superior niche. Itihaas is one of them. Well placed at the boundaries of the historic Jewellery Quarter and the Colmore Business District, this place has long been popular with hard-to-please professionals. Nowadays, however, it’s also attracting growing admiration from Birmingham’s army of dedicated foodies. 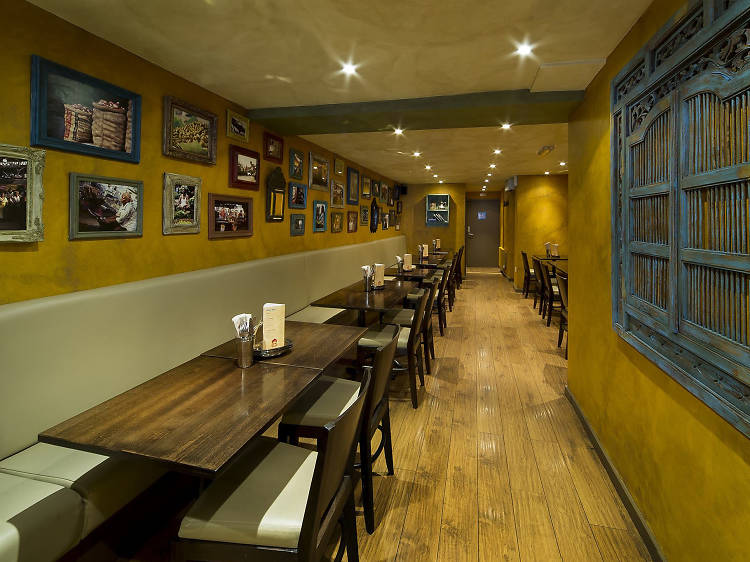 Hall Green’s Raja Monkey is slightly more forward-thinking and embracing of modern marketing methods than other South Asian restaurants, presenting a range of millennial-baiting thalis and street food. The artfully aged interiors aim to evoke nostalgia for the roadside diners of India, although, of course, its dining room is decked out with all mod cons. It’s not the cheapest spot, but prices are competitive. 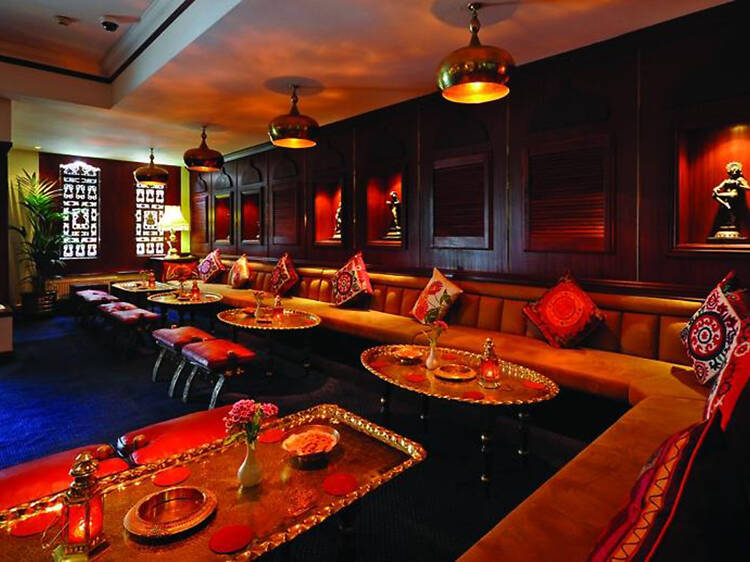 The jewel in the crown of the JQ, Rajdoot is a lesson in luxury for all Birmingham curry houses. It has delighted the city in one form or another for nearly 50 years and claims to have fed members of The Beatles and Pink Floyd, and even Princess Margaret. They will have loved its signature dark wood finishes and plush soft furnishings, and not least the menu of expertly cooked North Indian classics. So will you.

Pitched in the Birmingham suburb of Harborne, Umami holds its own in the wealth of Indian cuisine on offer in the second city. With its name the Japanese for ‘essence of deliciousness’, it prides itself on highly tasty food with heritage, for there is an essence of history and tradition that permeates throughout. Its British Railway Lamb Curry was served during the Raj days in railway canteens, whilst Lambsaagwala is a rural Punjabi delicacy of lamb, spinach and mustard leaves. There’s also Chicken Chettiyar, a tribute to the great warriors and connoisseurs of the community. From conception to execution, the care taken is evident. 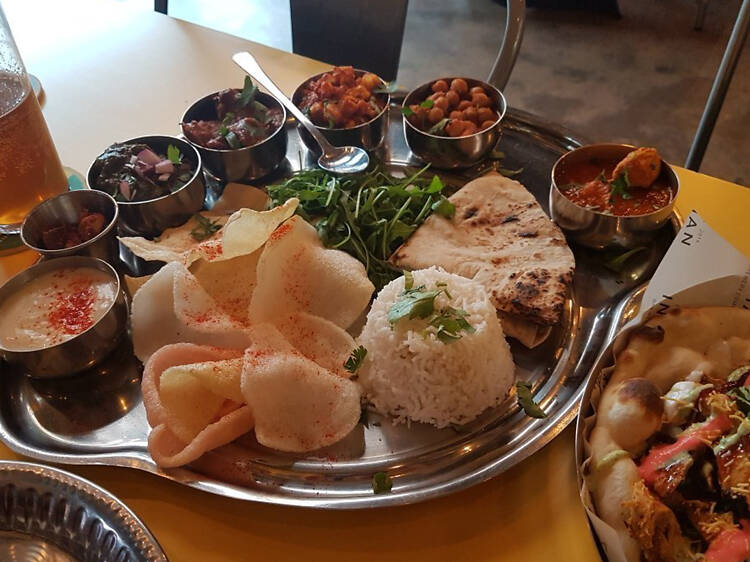 Combining the crisp craft beers of the Indian Brewery Company with a tantalising take on Indian street food, this cool and colourful spot under the railway arches on Snow Hill is a must for well-dressed spice addicts. Exposed brickwork slapped with Bollywood posters gives the place a downtown Delhi feel, while the fat naans with chicken, veg or chilli fish and Bombay sprinkle go perfectly with a pint of Birmingham Lager. 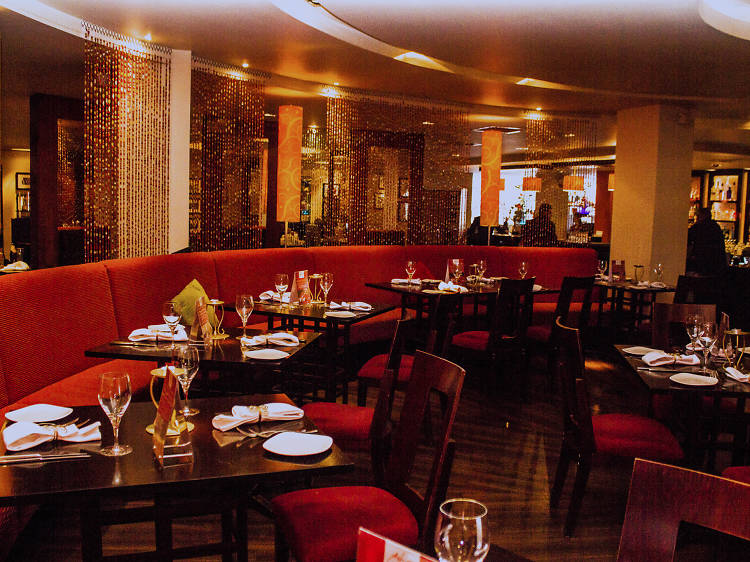 Birmingham now has its very own brimful of Asha right on Newhall Street. Following the success of restaurants in Kuwait and Dubai, this is a place where fans of Indian music and Indian food can combine their passions. The space is large but intimate, and decorated in a warm, welcoming style. From the fabulous tandoori kebabs to the unmissable curries, you’ll be singing the praises of Asha’s food all the way home. 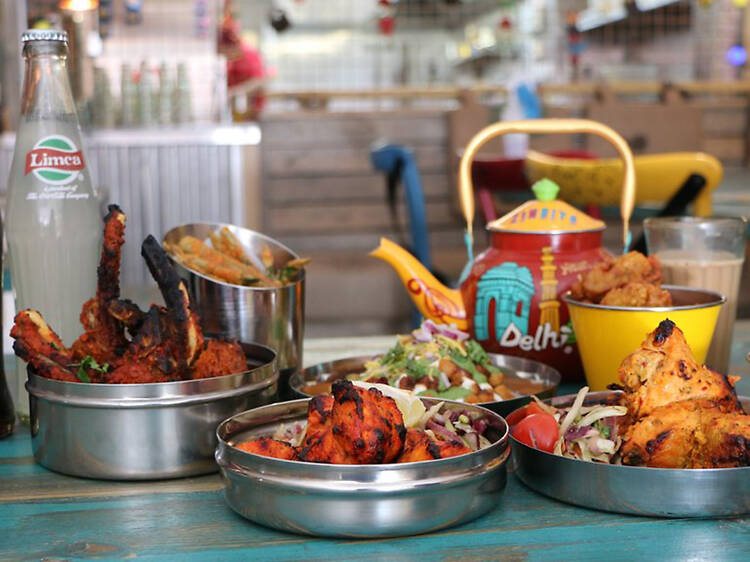 This Indian street food joint plays on tradition but jazzes it up for the city crowd. From the décor – mismatched furniture, exposed brick walls, big murals of Indian brand logos – to the thalis, which include pani puri (potato and chickpea dumplings), chilli cheese on toast and okra fries, it’s bursting with interesting details. In among the craft beers, you’ll also find lassis, masala chai and Indian soft drinks. 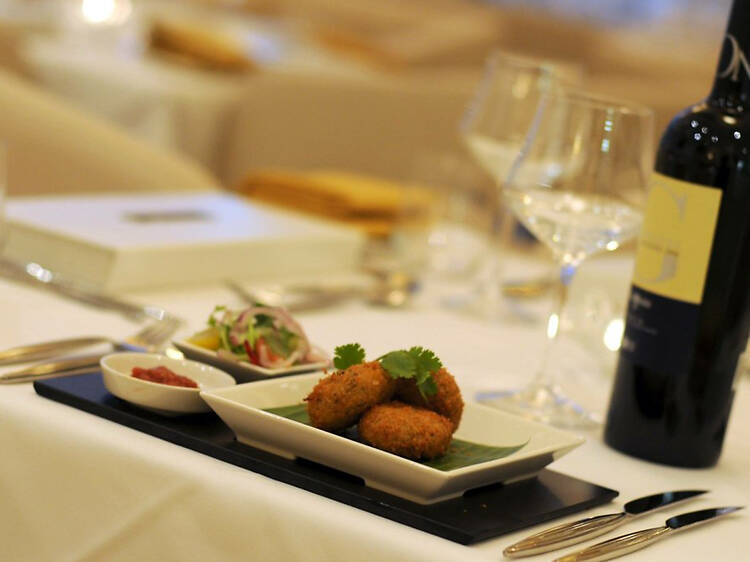 A past winner of best restaurant in the Midlands at the National Curry Awards, this Broad Street favourite is a classy refuge on the city’s craziest nightlife strip. But it’s far from dry, as the lavish cocktail bar proves. Order a signature mojito before getting stuck into a strong menu of Punjabi and north Indian dishes. A firm hit with the Indian cricket team, who frequently pop in whenever they’re playing at Edgbaston, Pushkar is an accomplished all-rounder that’ll really bowl you over. 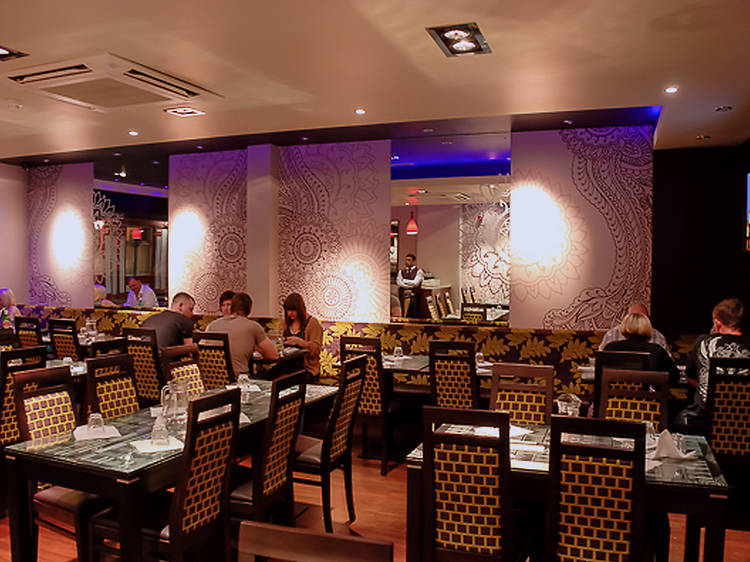 A few years back, Shababs’ decor might have been described as a little lacking. True, as one of the few remaining original Birmingham balti houses, the experience is understandably all about that dish, but its judicious recent makeover will definitely make you enjoy the environment that bit more. Unless, of course, you’re pattern-phobic, because swirls, paisleys and graphic prints are all over the place – from the walls to the soft furnishings. 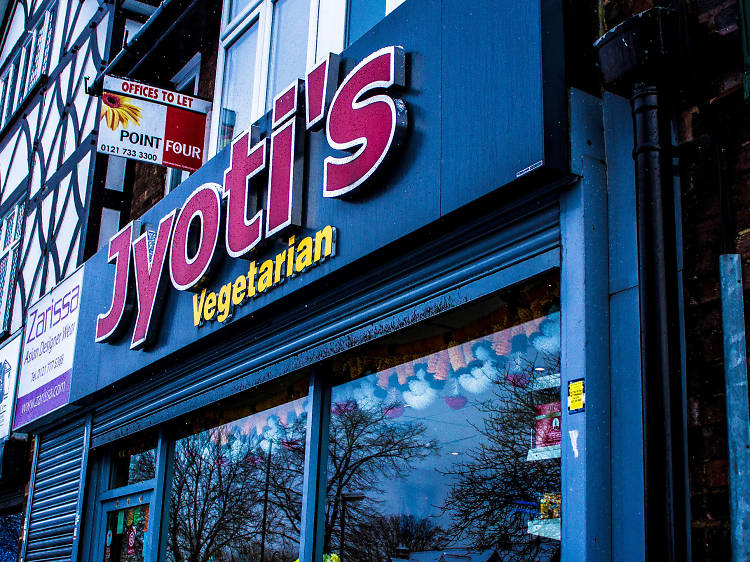 Birmingham hardly abounds with Gujarati veggie restaurants, so Jyoti’s isn’t competing in a crowded market and could almost get away with being mediocre. But it’s not. After a single, sublime meal, even rampant carnivores will grudgingly admit that omitting meat does not mean an absence of flavour. 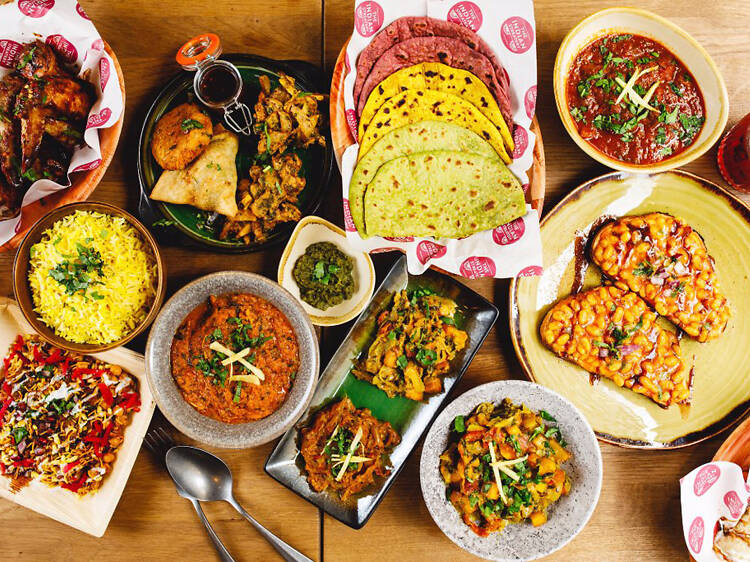 Digbeth Dining Club stalwart Indian Rasoi has found a permanent home on Bennett’s Hill, so now you can eat vibrant and traditional Indian street food without being out on the street. Expect the same high-quality chaats (deconstructed samosas with chickpeas and pomegranate), as well as some firm family favourites like Cannon Hill Parkpicnic (potatoes and peas tossed in herbs and spices) for a dash of local flavour.

Located in the Jewellery Quarter, Viceroy Tandoori has become well known for its neat presentation, quality service and eclectic menu. Sprung from a Bangladeshi background, the Viceroy has a varied menu for meat-eaters and vegetarians alike, as well as a generous selection of fish dishes including tandoori grilled monkfish, creamy ajwani cod plus aromatic Tiger and King prawns. For something more classic, try the ‘old school’ Viceroy-style chicken tikka masala. 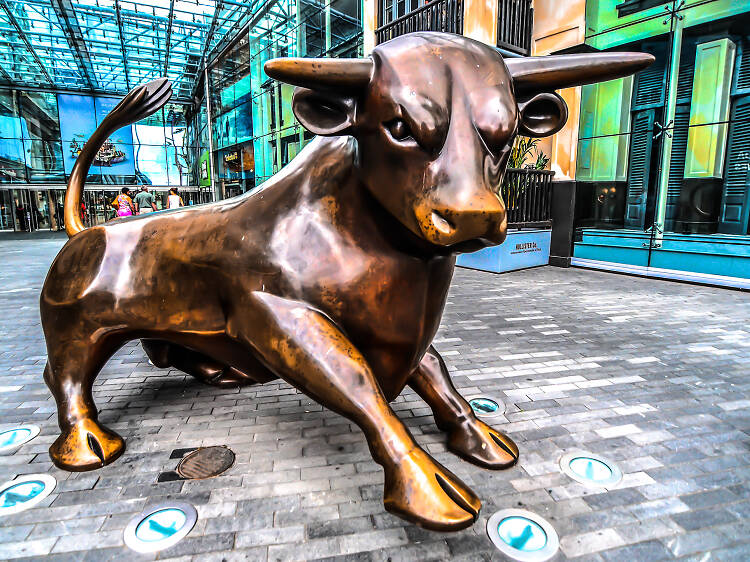 The 10 best attractions in Birmingham

From the Library of Birmingham, basically a museum of books that gives you access to unrivalled panoramic views from its Skyline Viewpoint, to the Jewellery Quarter, an industry hub filled with bars, art galleries, restaurants and more, this city is home to wide array of must-see sights.