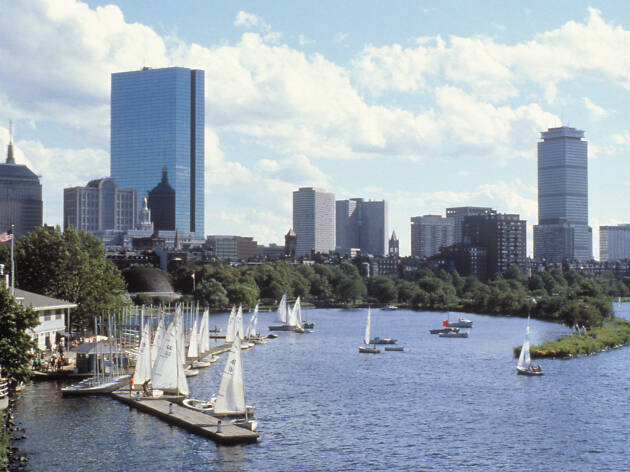 Where to stay in Boston

When visiting Boston — one of the most expensive cities to visit in the USA — it helps to determine which neighborhood is right for you. Our guide spotlights the best neighborhoods, and everything you need to know for enjoying each one. 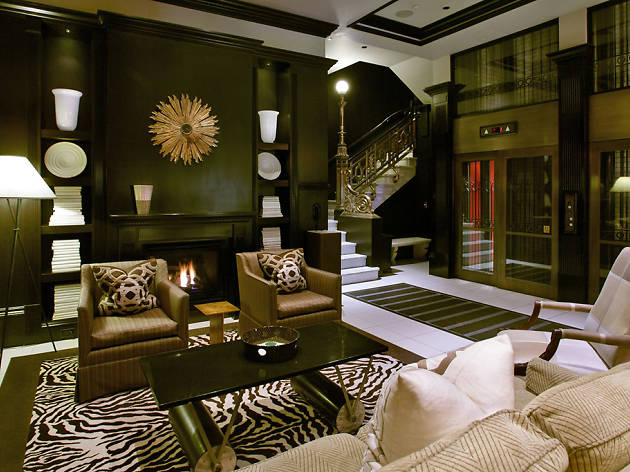 The 16 best hotels in Boston 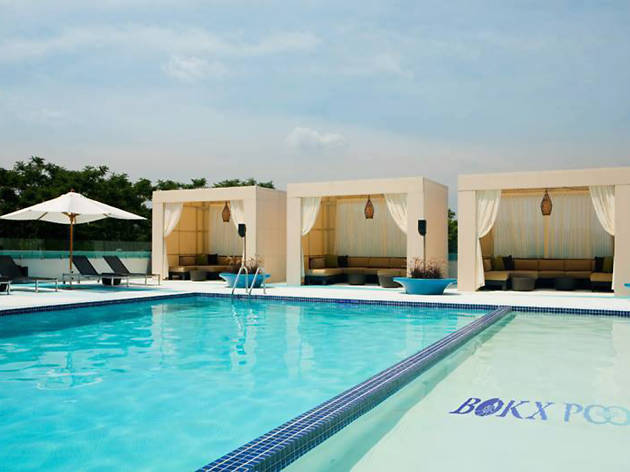 The 11 best cheap hotels in Boston 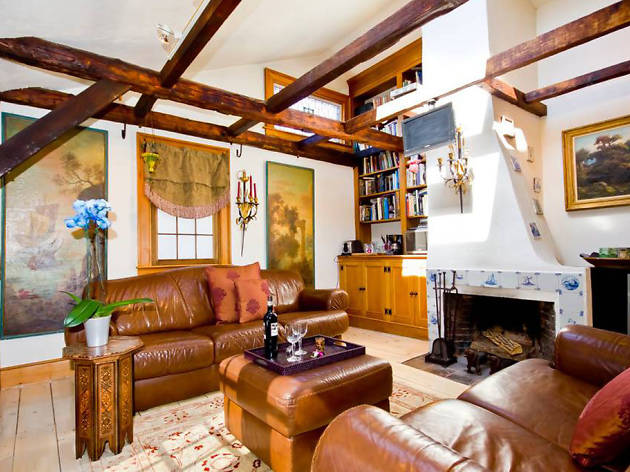 The 12 best Boston Airbnb homes to rent out right now 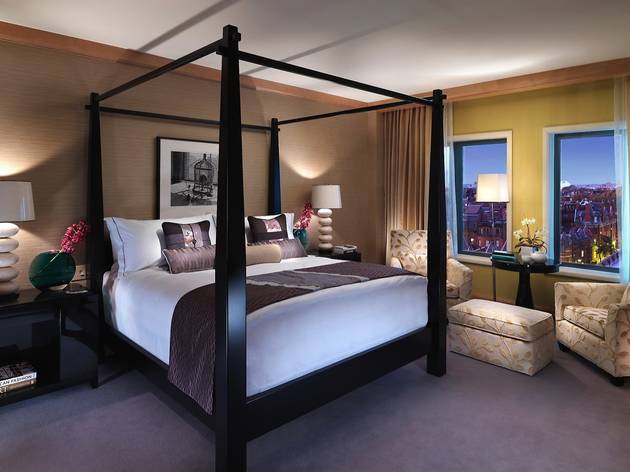 Blending global luxury, Back Bay stye and New England charm, the Mandarin Oriental is an oasis in on bustling Boylston Street. The city's most sought-after shopping and dining is just steps away, but inside the Mandarin, elegant and modern guest rooms wow with stately decor. Elsewhere in the building, the world-class Bar Boulud serves up seasonal French fare, while the 5-star spa pampers guests with hydrotherapy, steam rooms, vitality pools and more. 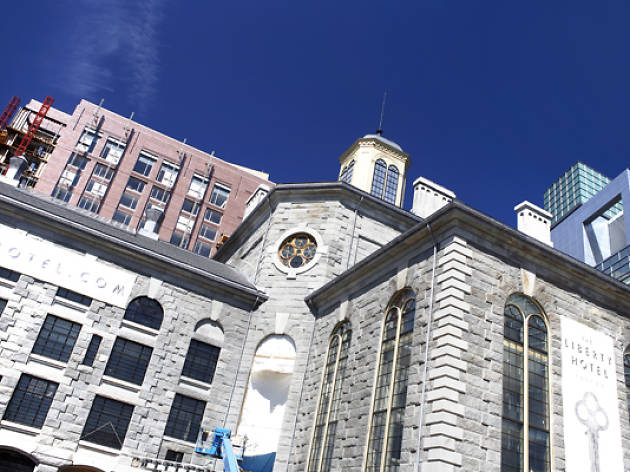 The cells in the Liberty Hotel, by the Charles River near Beacon Hill, have an altogether less tranquil history than the guesthouse; drunks and assorted villains were once locked up in the tiny cubicles in what is now the bar. Built in 1851, the Charles Street Jail was a model prison for the times - but by the 1970s, the facility was outmoded and in disrepair. A district court ruled that the jail violated prisoners' constitutional rights, and it finally closed in 1990. Needless to say, there's no trace of its former squalor. For its conversion into a luxury hotel, some $120 million was pumped into renovations and the construction of a 16-story wing, which contains most of the 300 guest rooms. The airy central rotunda, which houses the main lobby, is topped by a cupola that was formerly covered over, and magnificent, original floor-to-ceiling windows overlook the landscaped patio. Rooms are more comfortable than cutting edge, with pale, neutral decor, mahogany furniture and handmade patchwork throws. Luxuries abound, from plush bed linen and Molton Brown toiletries to flatscreen HD-LCD TVs. 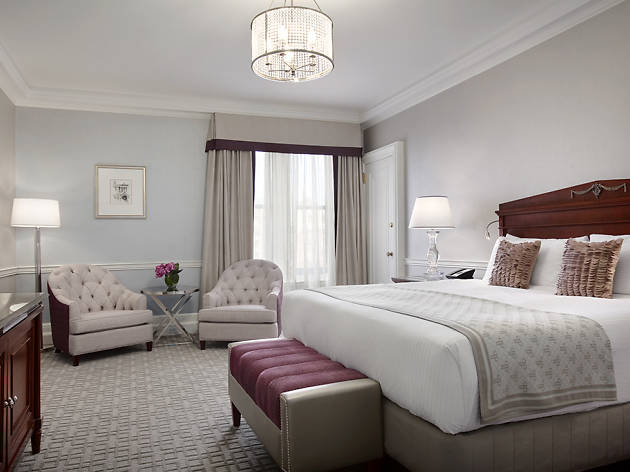 This little sister to New York's Plaza Hotel occupies a prime spot overlooking Copley Square, in the heart of Back Bay. Built in 1912, its mirrored and gilded lobby and function rooms are quite spectacular, with beautiful murals and ornate ceilings. But this place also has the air of an old family business, with black labrador Catie holding court in the lobby. A major renovation has introduced modern comforts while preserving the old-fashioned charm; rooms have high-speed internet access as well as stately club chairs and marble bathrooms. On the fourth floor, the discreet Fairmont Gold hotel-within-a-hotel has its own dedicated check-in and concierge, business center and lounge. The Fairmont's mahogany-paneled bar and restaurant, the Oak Room, is a Boston institution. 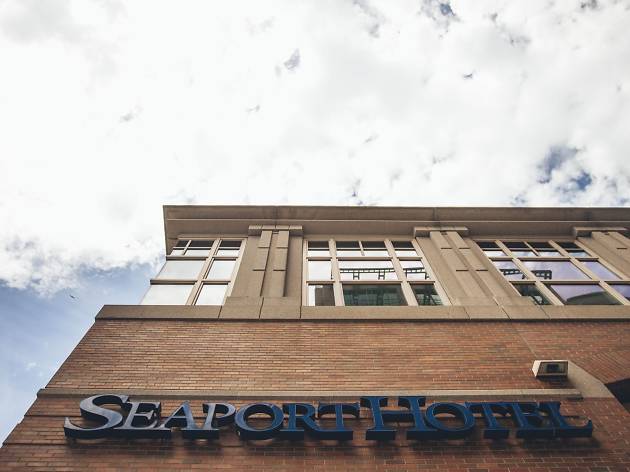 Before the harbor area development, the Seaport was a lone beacon, accommodating business types attending the adjacent Seaport World Trade Center. Now that the nearby Institute of Contemporary Art has broadened its attractions and Fort Point is blossoming, putting up here offers a different perspective on the city. Facilities are faultless: the spa is highly recommended, while the third-floor fitness center has a wonderful 50ft pool with sky views and underwater music. There's also plentiful parking in the adjacent garage, and a good in-house restaurant, Aura. Innovations include the touch screen in-room 'Seaportal' service, which provides gusts with VoIP (Voice over Internet Protocal) telephone calls, information on local dining spots, cultural attractions and events, public transport schedules and the latest flight information from Logan International's website - all at the tap of the monitor screen. 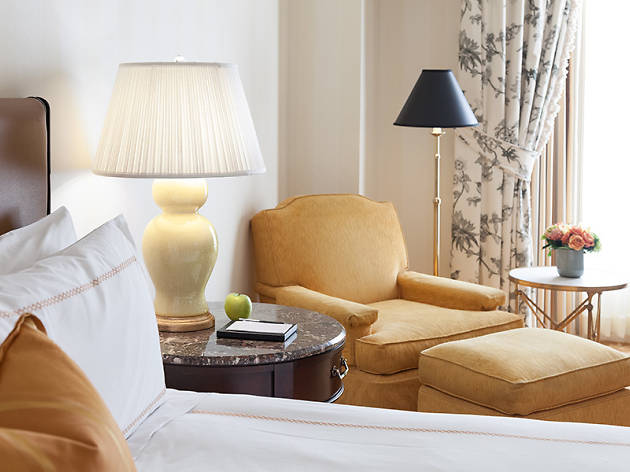 The five-star Four Seasons is known for its famous guests. When the Stones roll into town, this is where they set up camp. Built on the site of a former Playboy Club, the hotel boasts an ideal location in the Back Bay with swooning views of the Public Garden, plus impeccable amenities (swimming pool, fitness center and spa) and services.

In a former office building near the State House, XV Beacon opened in 1999, introducing contemporary boutique chic to Boston. Although there's more competition now, XV's air of discretion and exclusivity still carries considerable cachet. The sleek, spacious guest rooms are decorated in a lively mix of stripes and patterns, browns and beiges, and feature marble bathrooms and a lounge area with a grand gas fireplace (which, inexplicably, seems to emit heat whether you want it or not, battling with the air conditioning). The modern four-poster beds are a bit twee, but recent updates have introduced flatscreen TVs. The swanky restaurant, Mooo, offers steakhouse dining with a tongue-in-cheek twist. The hotel's free chauffeured car service is a boon, especially in winter, although its prime Beacon Hill location puts you just steps away from the Financial District and Back Bay. 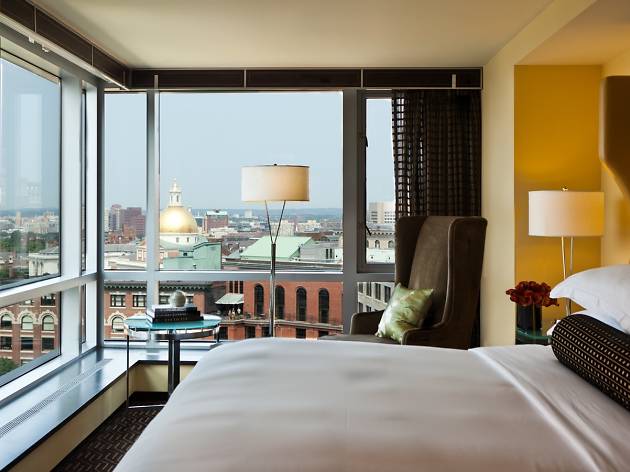 A blend of classic and modern architectural elements, this downtown hotel is a boutique haven for business travelers and those seeking central access to the city. From a wood-paneled lobby, you’ll travel upstairs to rooms that are urbane and opulent, with terrific city views. Nine Zero provides a master class in pet-friendliness, from complimentary dog beds to pet sitting and, yes, four-legged massage services. 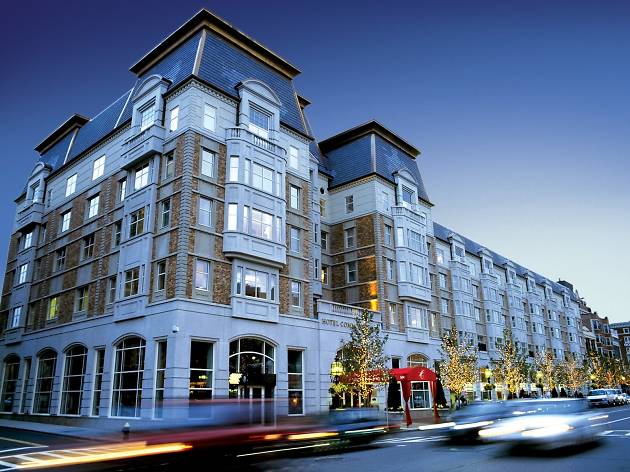 Both kid- and pet-friendly, Hotel Commonwealth offers rooms that are modern and doused in sunlight; many face out onto Fenway Park. (Baseball-themed packages are available for die-hards.) The collection of on-site F&B might be the most impressive in the city; between Eastern Standard, the Hawthorne Bar, and Island Creek Oyster Bar, guests are well-served day and night. 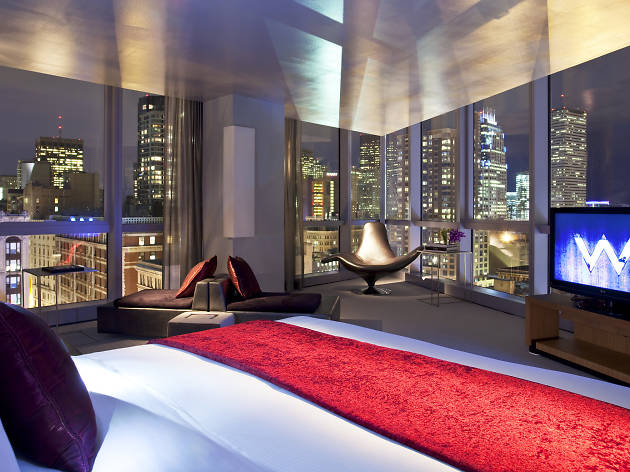 Known locally as "The W," this trailblazing urban hotel brand (part of the Marriott family) continues to impress with its lone Boston property. Immediately upon entering the hotel, you'll find yourself in a buzzing lobby bar, crowded with visitors and after-work locals making the scene. There's a Bliss Spa that's perfect for pampering, and the Tunnel nightclub is one of the city's hottest. 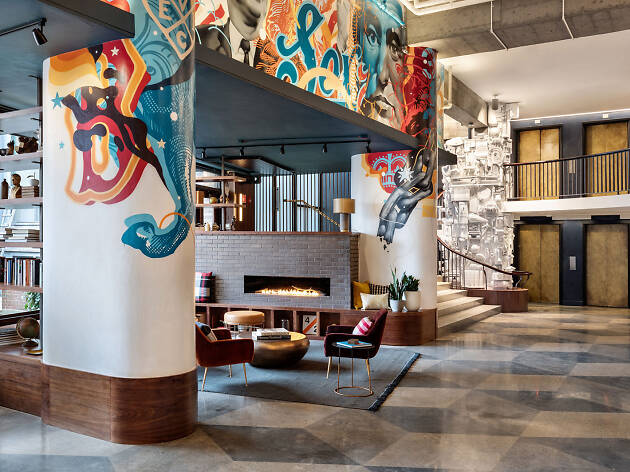 Notoriously lacking in hotel options, the South End is one of the nicest places to stay in the city, and The Revolution Hotel puts visitors right in the heart of the historic neighborhood. The hotel—which resides within an adaptive reuse of one of the first YWCAs in the nation—offers Conspire, a modern co-working space that is free for guests and available to non-guests for a daily or monthly fee. The property also features engaging art and objects that display Boston’s many innovations.

Stay at the best hotels in North America 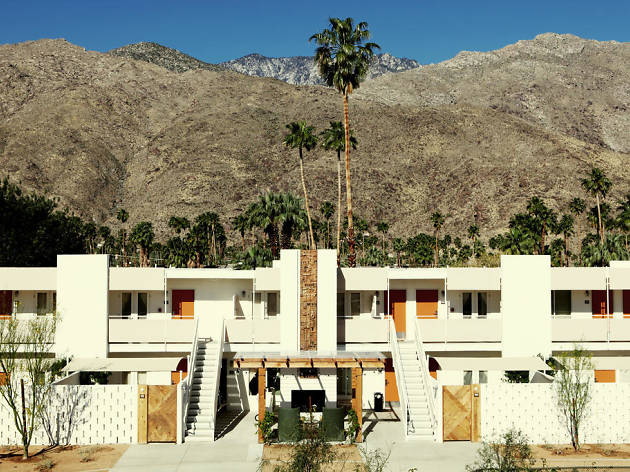 The 11 best hotels in California

With everything else turned up to full volume, why settle for less than one of the 11 best hotels in California? 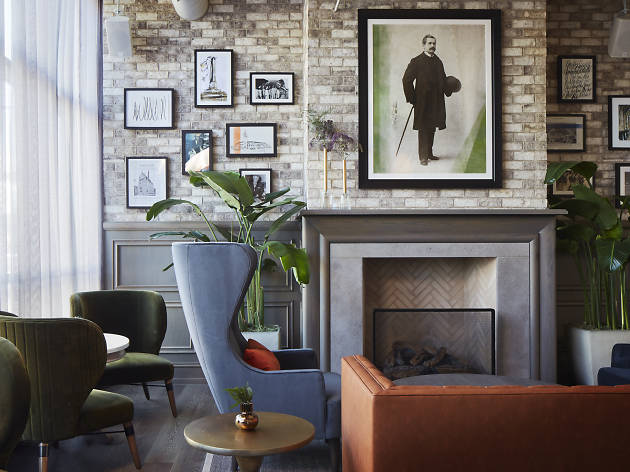 The best hotels in Chicago 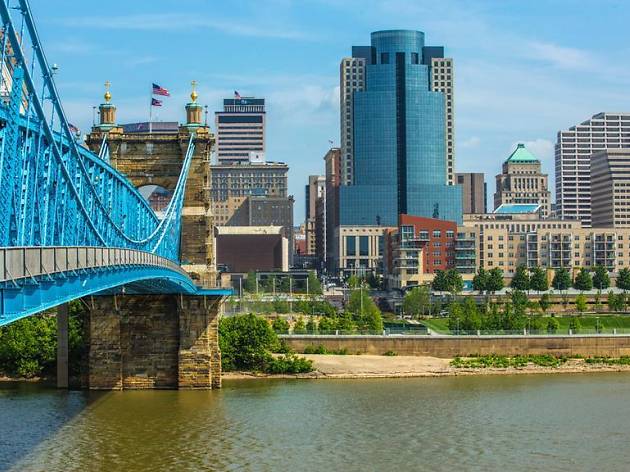 The 10 best hotels in Cincinnati

From architecture to coffee culture, make sure you get the best of the Midwest with the 10 best hotels in Cincinnati 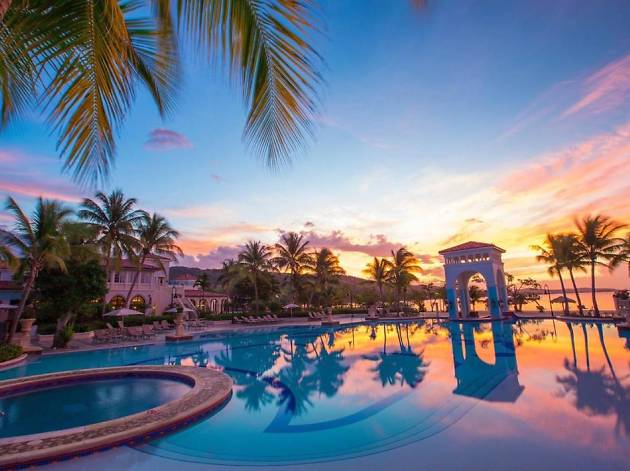 The 10 best hotels in Jamaica

Some of the most stylish places to stay here have grown out of the music industry, and the island also gave birth to the concept of large all-inclusive beach resorts.