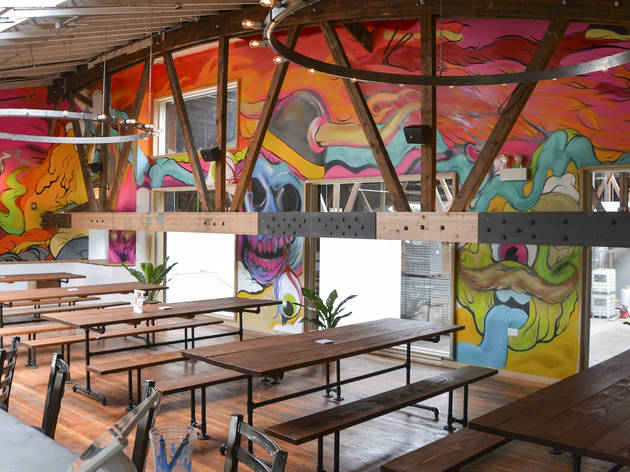 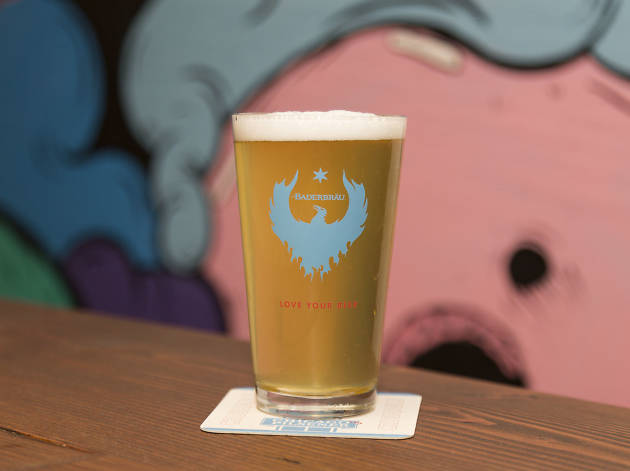 South Loop gets a cool (and massive) brewery space with approachable beer.

You’ll have no problem finding Baderbräu, the signage for the brewery spans the whole block. But when I walked in, I felt like I had been duped—the signs deposited me in what looked like an office building, leading me up a staircase that doesn’t feel like a brewery entrance. Once upstairs, visitors are greeted by a hallway filled with barrel slats and a huge taproom with a brightly colored phoenix mural from local artist Brian Keller and windows overseeing the brewery reaffirming that you are, indeed, in the right place.

Baderbräu’s not new to the brewing scene—they’ve had beers distributed around the city since 2012, but the taproom is a welcome addition. The space is filled with picnic tables and a large wrap-around bar, serving a rotating selection of 10 beers—no small feat. The brewery’s flagships—Chicago Pilsner, South Side Pride (labeled “beer-flavored beer,” a light helles lager) and High Noon (a hefeweizen)—are always on tap, but the rest of the list tends to clock in at lower ABVs, making for easy drinking.

Not all of Baderbräu’s beers are hits: The Lawnmower Lager, a hoppy lager falls flat when it comes to taste, with a grassy single-hop note instead of its promised fruity complexity. As for the flagships, they’re generally fine but lack complexity and didn’t make us eager to reach for another glass. You can order beers by the glass or sample flights of five or ten beers to choose your own adventure and drink through all of the brewery’s offerings. Our favorite was the Velociradler, a South Side Pride mixed with kumquat juice—it’s the perfect summer drink, with fruity notes and a noticeable amount of carbonation.

While not all of the beer is worth making the trip back for on its own, there are things we love about Baderbräu. The space is incredible, an inviting room that you could definitely hang out for a while (or even get married in—weddings have already been held in the brewery space). It’s also a great spot for events, such as regular board game nights, happy hours and even yoga, all hosted at the brewery, which seems serious about building a community around its beer. This neighborly vibe is reminder that it sometimes doesn’t matter what you’re drinking, as long as you’re among friends.

Atmosphere: The space is big and comfortable—it feels like you’ll always be able to find a seat, whether you’re sitting at a picnic table with a big group or cozying up to the bar for a chat with a friend.

What to eat: You can order in from nearby restaurants (feel free to ask the bartenders for a few menus), like Ricobene’s.

What to drink: Try the Velociradler if it’s on tap and grab a flight if you’re looking for a sampling of what’s available before committing.

Where to sit: Our favorite spot to sit will always be at the bar, but you could also bring a few friends and play a board game at one of the picnic tables (BYO board game if it’s not game night).

I loved all the beer here (and I did try every single option on the menu, haha). None of them were too bitter or hoppy for me. The food menu could be larger, but the mac and cheese waffle was lovely as advertised. A waffle stuffed with mac and cheese and then covered with more mac and cheese, what could be bad, besides my digestion that night? Delish.

Very cool space, very odd location, pretty good beer, really awesome art. I mostly came here for the mac and cheese waffle - which was exactly what you thought it would be - literally mac and cheese baked in a waffle maker and covered with more cheese. I think it probably makes for really good drunk food, but not as good when sober. The flights are reasonable priced - you can try every bear on the menu for $15 so can't complain about that! Also has some nice views of the green line and the sunset over the city. I could see it being a good spot for larger events, but for our 2 person top it felt a little slow with service and just not that memorable of an experience.

My friend and I have been coming here weekly for trivia for the past few months and really enjoy the beers and the vibe of the place. The artwork is fantastic and there are enough beer options to keep you tasting all night. Also, they allow for BYO Food which is a plus and helps to make a fun night of relaxing with friends. With that said, the service is not great and they can improve on how much they train the bartenders.

So I've been here twice. First time was way better than second. The beers are kind of fun. The service is really where this place dies...the bartender we had was soooo rude. I won't be going back because of that reason.

I stumbled upon this place because an event was being held here. A DJ I really like, Moon Boots, was playing a set here for a Halloween event. The space was very cool. There was a large disco ball installed, and it was open bar for VIP ticket holders. Despite that, I explored the space and saw there was a Chicago mural on the main floor. Going up the stairs to the tap room there was a beautiful mural by Brian Keller. Furthermore, the hallway to their other room was absolutely beautiful because it was all wood planks. Finally, the main room facing Wabash was filled with artwork that is for sale. It was definitely worth checking this brewery out, and I don't even like beer!