Dusek's Board and Beer 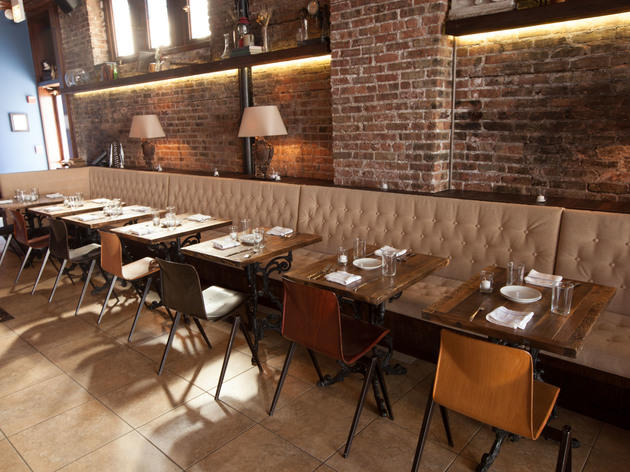 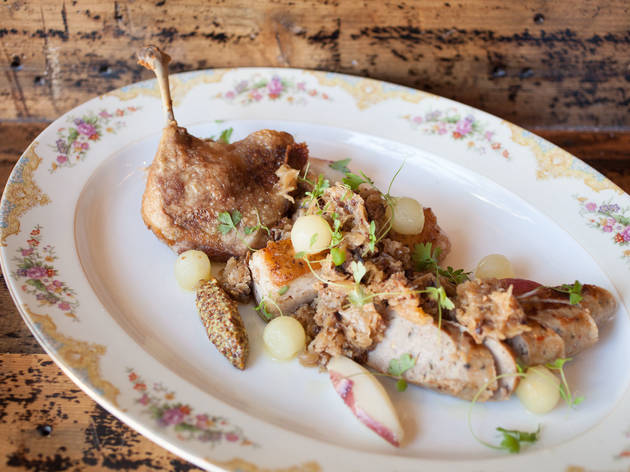 2/15
Photograph: Martha WilliamsChoucroute is on the menu at Dusek's Board & Beer, located in Thalia Hall. 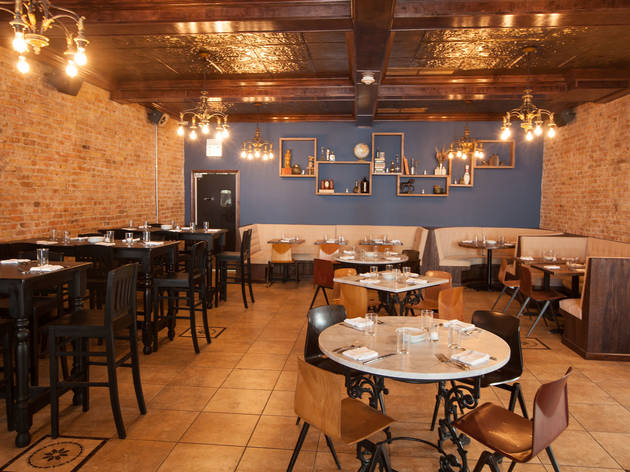 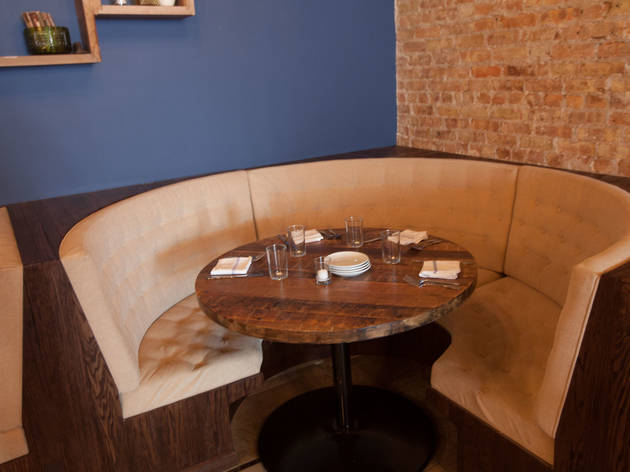 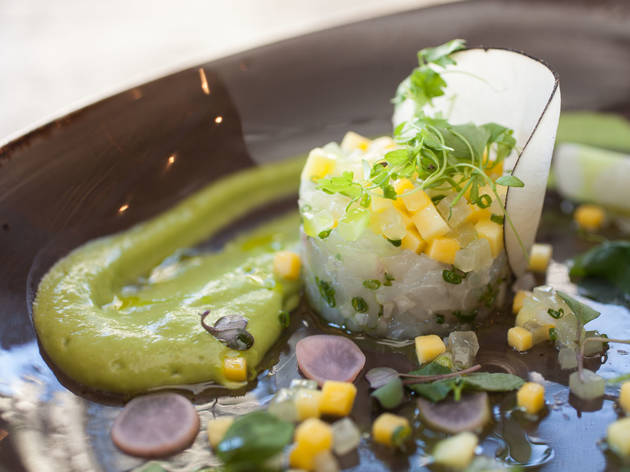 5/15
Photograph: Martha WilliamsFluke crudo is on the menu at Dusek's Board & Beer, located in Thalia Hall. 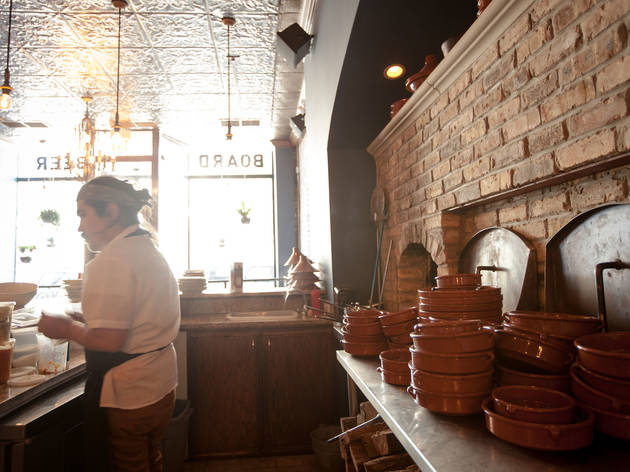 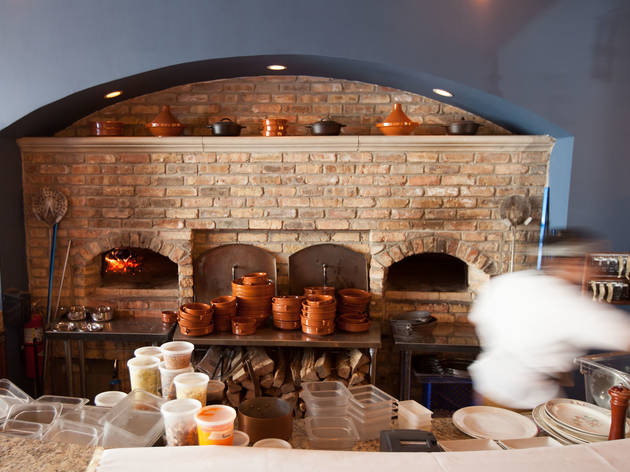 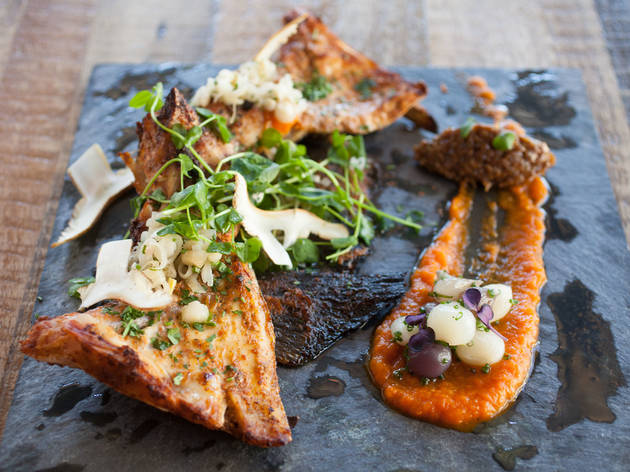 8/15
Photograph: Martha WilliamsCobia collaris on the menu at Dusek's Board & Beer, located in Thalia Hall. 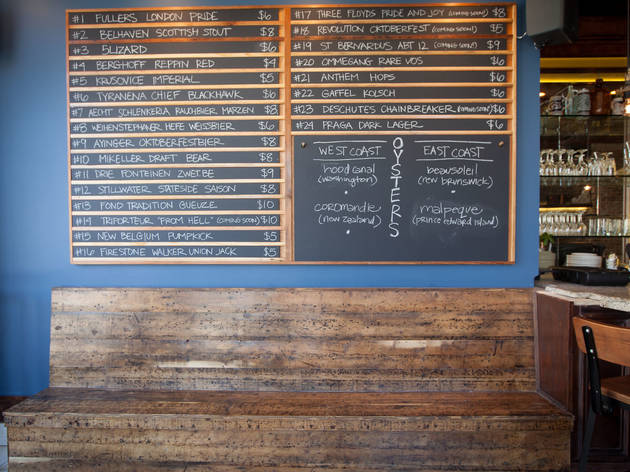 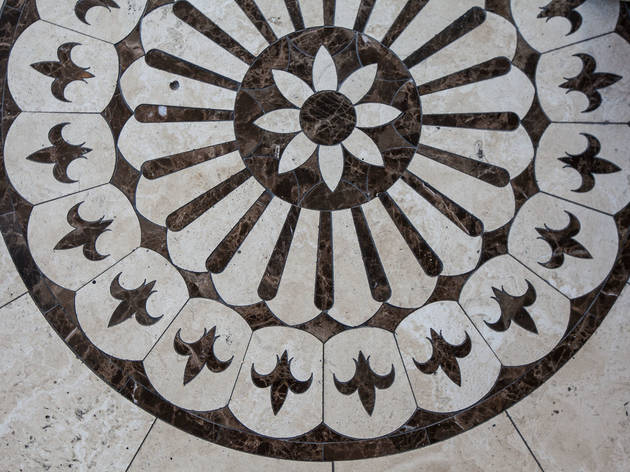 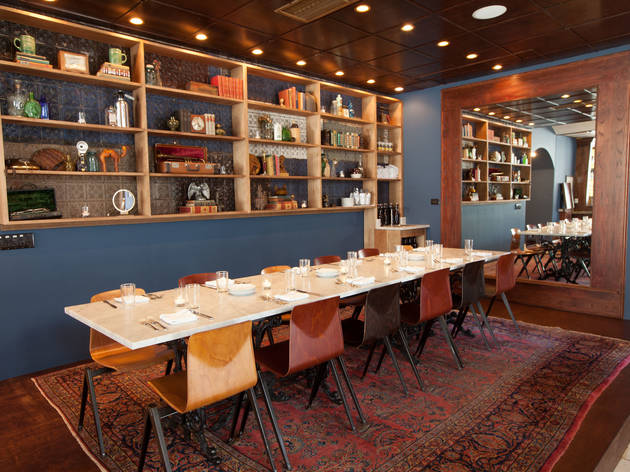 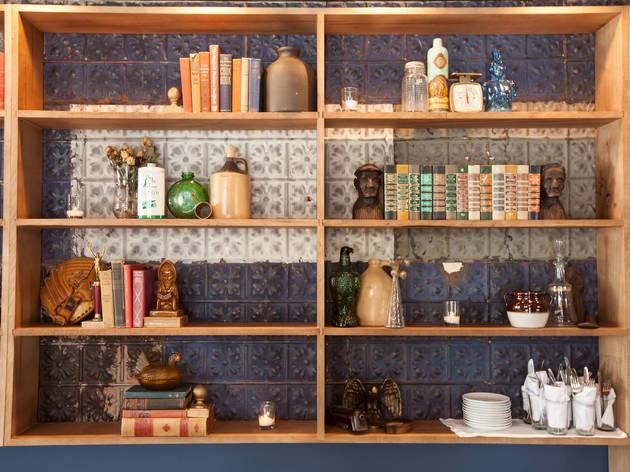 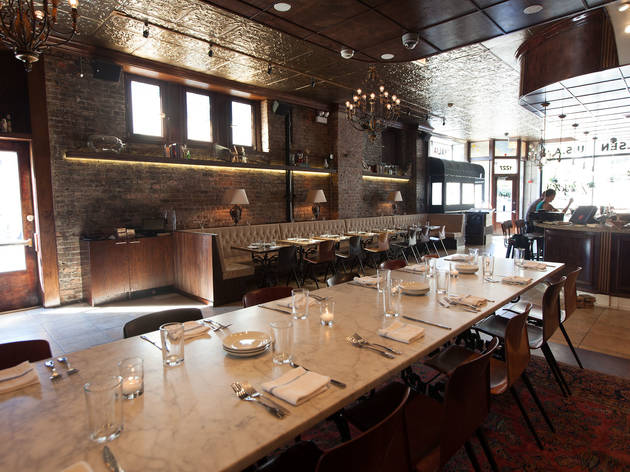 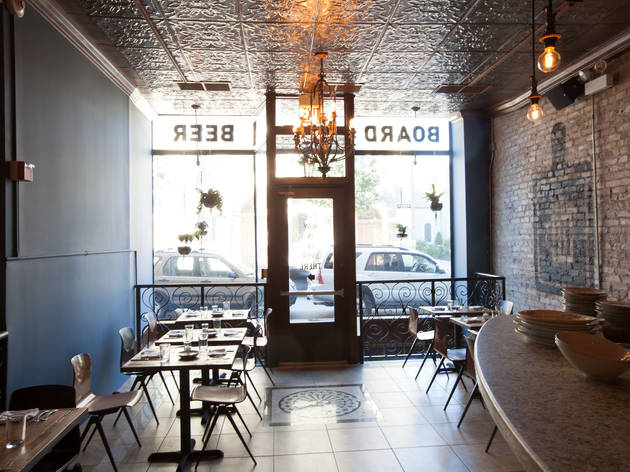 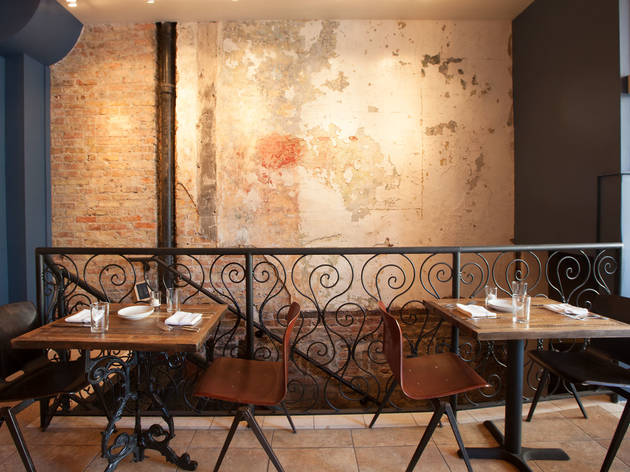 On the door of Dusek's Board and Beer, the opening date (2013) is laid out in gold letters. Next to it is an unexpected word: "re-established." Rather than bring an overpriced, newfangled hipster paradise to East Pilsen, the folks behind Dusek's have done something unexpected: tried to bring a little bit of the neighborhood back to its 19th-century roots.

Dusek's is only one part of the ambitious Thalia Hall project that includes a bar, a restaurant and a performance venue. Thalia Hall was originally the creation of John Dusek, who opened the building in 1892, when the neighborhood was Czech. The hall itself isn't quite refurbished yet (though I peeked inside and the space is incredible) but the bar and restaurant are ready to go.

The restaurant itself is cozy and warm, with a tin ceiling, tons of Edison bulbs, and reclaimed wood–and–wrought iron tables that, while beautiful, can be a bit unstable. One corner of the front dinner room looks like a movie set of a 1940s dining room, completely with books, tchotchkes and a table set on a platform a few inches off of the ground. The owners wanted to re-establish Dusek's idea of a multipurpose community hall, which had me seriously anxious—concert venues traditionally serve pretty mediocre food.

With chef Jared Wentworth (Longman & Eagle) at the helm, I shouldn't have worried. In fact, my visit to Dusek's was the first time in months that I've looked at a menu and been totally unable to pick what to order; everything looked too darn good. Would it be the crispy pig tails, served with a take on a lyonnaise salad topped with a sauce gribiche? Perhaps the Juicy Lucy, a Minnesota classic not often found in Chicago, wherein Slagel Farms beef is wrapped around cheese for an effect not unlike a savory Gusher.

The food lives up to the mouthwatering menu descriptions, and Wentworth isn't pulling any punches to appease the unadventurous. The amuse one night was foie gras with candied orange, there are challenging fish on the menu (mackerel, ono, sepia and hake, with nary a salmon filet in sight), and there's plenty of offal—in addition to the pig tails, there were chicken livers, more foie and sweetbreads.

Oh, those sweetbreads. Dubbed General Tso's sweetbreads and served with shishito peppers, pickled daikon and pea tendrils, they made me want to send a memo to every Chinese restaurant in America: Switch out your chicken for sweetbreads this instant! The pea tendrils, often a throwaway garnish, added the perfect note of vegetal funk to the finish of each sweet, crispy bite.

In an unexpected twist, Dusek's may now serve my favorite lobster roll in the city. Filled with huge chunks of buttery Maine lobster wrapped in Werp Farm lettuce, it was a wonderful taste of the ocean. Their Southern-braised green beans are treated like collards and cooked into a falling-apart savory mess. My notes on them read: "I could keep eating these until I was sick, and I still wouldn't stop."

Not everything was perfect. A seared Spanish mackerel was expertly cooked, but served with an explosion of ingredients (gnocchi, mushrooms, pickles, lobster veloute) strewn across the plate so randomly it was difficult to get a sense of what a bite was supposed to taste like. The Slagel Farms half-chicken was roasted exactly as it should have been, but the accompanying Brussels sprouts didn't taste like much and the "porcini marmalade" tasted like mushrooms thrown in a food processor: savory but not very exciting.

But let's not be too picky; Dusek's food is a solid hit. If you like beer, the drink menu will be just as good for you—instead of the now-customary exclusive focus on local beers, Dusek's 23 drafts range far and wide, even incorporating some Czech brews. If you want a real (shocking) taste of Eastern Europe, you can even sip an after-dinner bottle of Underberg, a German digestif that gives Jeppson’s Malört a run for its money in bitterness. Almost the entire cocktail list is made up of beer-based cocktails, so if that's not your thing, just order off-menu—they can make you anything you want.

Perhaps my favorite part was the total lack of sticker shock. Almost nothing on the menu (save the oysters, of which they stock six different briny varieties) tops $20. Even the lobster roll, marked "Market Price" (usually a sign for: We're going to screw you) was only $21 and could easily have fed two people. A High West Manhattan cost a reasonable $7.

John Dusek might blanch at a $7 drink (it was probably more like 7 cents when he ran the place). But otherwise, I think he'd be happy to have his name on this newcomer.

Near Dusek's Board and Beer