Technically, this isn’t a story about the Chicago Cubs. But you can’t even grab a drink at Matthias Merges’s upmarket Wrigleyville restaurant and rare spirits bar without getting an eyeful of the Friendly Confines, which looms large just across the street.

Nestled inside the 173-room Hotel Zachary, Mordecai exemplifies the North Side neighborhood’s new direction, one that veers sharply away from its blue-collar roots and rundown bro bars. The shift began almost a decade ago, when the Ricketts family bought the team and a significant swath of Wrigleyville real estate (including what’s now the Zachary), ushering in an era that not only ended the World Series drought but also sought to monetize the neighborhood year-round through a wave of commercial redevelopment.

Though Mordecai turns out some expertly crafted cocktails and delicious, hyper-seasonal plates from chef Jared Wentworth, it’s almost impossible to judge this eatery without factoring in the sea change happening just outside the front door. Even the name homages Hall of Fame Cubs pitcher Mordecai Brown. It’s no wonder I felt uneasy contemplating the $15 crudo and $28 hanger steak and sipping a $25 pour of Navy Strength Jamaican rum. (Then again, the average ticket price for a Cubs game topped $150 last year.)

By way of disclaimer, I’m not knocking the fact that a talent-driven opening like this may very well draw discerning, deep-pocketed diners to Wrigleyville 365 days a year. But perhaps this lifelong Cubs fan and wife of a season ticket holder—for whom Wrigleyville still signifies pure, gimmick-free baseball followed by $5 pints at Nisei Lounge—needs a moment to process this shiny new reality.

My husband and I booked a table on a weeknight while the Cubs were away, opting to avoid the game-day mayhem. We strolled past our usual entry gate at Addison and Sheffield, rounding the corner onto Clark. The familiar brick facade of the Cubby Bear and adobe roof of a soon-to-be-dispatched Taco Bell I used to frequent after beer-soaked bleacher games were quickly swallowed by the sprawling Zachary. The hotel’s first two floors host local chainlets West Town Bakery, Smoke Daddy and Big Star—which, in typical fashion for the taqueria, was overflowing with revelers on an otherwise quiet Wednesday evening.

Across the street—in the bygone site of a delightfully nonsensical car wash—Gallagher Way’s “town square” lawn unfurled before a glossy complex that houses the team offices, Merges’s craft beer bar Lucky Dorr, Jeni’s Splendid Ice Creams and a Starbucks Reserve. Young families were assembling on folding chairs in preparation for a showing of The Mighty Ducks on the big screen affixed to the building’s facade.

We entered through the Zachary’s lobby, which is handsomely appointed with dusty-blue tile, salt-and-pepper brick walls and vintage artwork including blueprints and sketches from Zachary Davis, the hotel’s namesake and architect of Wrigley Field. Dual wooden staircases snake upstairs to reception, the hotel’s eatery and Mordecai’s spacious open-air patio bar.

Save for the goat brat and cheeseburger, Wentworth’s menu traffics in veg-forward American small and large plates with mostly lovely results. A colossal charred panzanella transcended its desk-lunch descriptor—grill-marked romaine, fresh cucumber, jammy dehydrated tomatoes, thick cubes of toast and salt-cured olives were harmoniously bound by a mild red wine vinaigrette beneath shards of ricotta salata. I could eat that salad every day.

Any disenchantment dissipated with our entrees’ arrival. Submerging my fork into a cloud of nutty aerated Parmesan revealed thick ribbons of house-made arugula pappardelle mingling with a peak-springtime bounty of stem-on young turnips and carrots, morels, peas and asparagus atop a tangy swipe of asparagus puree. The husband’s hanger steak was one of the tenderest I’ve had—cold-smoked and coaxed to just rare beneath a glistening, charred exterior. A tangle of bitter greens mirrored the meat’s singed bitterness, softened by the accompanying Spanish blue cheese butter and smoky-sweet romesco—whose savory remains we mopped up with crisp shoestring fries.

As we digested, we scanned the vintage spirits list spanning antique bourbons, rum, Scotch, fernet and amari for the cheapest two-ounce pour: $25. Mordecai’s list emphasizes whiskey—in particular the nation’s largest collection of Pappy Van Winkle. Even so, after asking what we like to drink (whiskey, Scotch and gin), spirits archivist Kris Peterson steered us toward the “underappreciated” rum section, to a four-year-old Transcontinental Rum Line Jamaican pour that began sweet with warm spices and tropical fruit and finished faintly rubbery—like a pitch-perfect tiki cocktail in straight booze form. Along with the bottle, he left a vial of spring water and a glass with a single ice cube so that we could “play.” A few drops of water awoke the rum’s subtler aromas.

Basking in the refined glow of our mini spirits lesson, we dug into a softball-sized yeast donut coated in popcorn that tasted like Cracker Jack (by the way, a perfect edible counterpart to oak-aged rum), except its center burst with silky Bavarian cream. Then suddenly the onscreen action picked up as the Ducks faced off against their nemeses the Hawks, jolting us disconcertingly back to New Wrigleyville.

Maybe it is impossible to separate the restaurant from the ’hood. I suppose the offseason will tell.

Atmosphere: This refined bilevel barstaurant in Hotel Zachary turns out mostly successful seasonal plates, booze-forward cocktails and expensive vintage spirit pours in the shadow of Wrigley Field, as part of the once blue-collar nabe’s new identity.

What to eat: Veg-inclined plates evolve with the seasons, though a goat brat and double cheeseburger subtly remind you that you’re steps from Wrigley Field. Don’t skip the panzanella salad, arugula pappardelle and succulent hanger steak with romesco.

What to drink: The alpine Four Leaf Clover with aged Irish whiskey begets Bachman’s knack for building cocktails, while citrusy, ’90s throwback Zima floats (featuring a housemade version of the malt liquor) offer a less-cerebral taste of summer. Splurge-seeking drinkers should ask the onsite spirits archivist for guidance on two-ounce pours from the rare spirits library.

Where to sit: The upstairs patio is open weekends, game and concert days, weather permitting. When the team’s in town, arrive a few hours early to nab a seat. Inside, belly up to the sleek, leather-covered bar for small plates and cocktails. 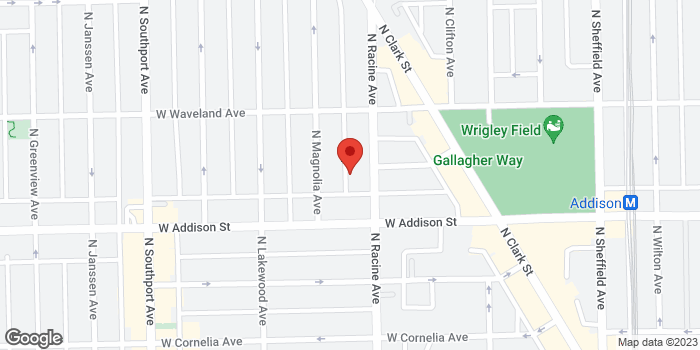