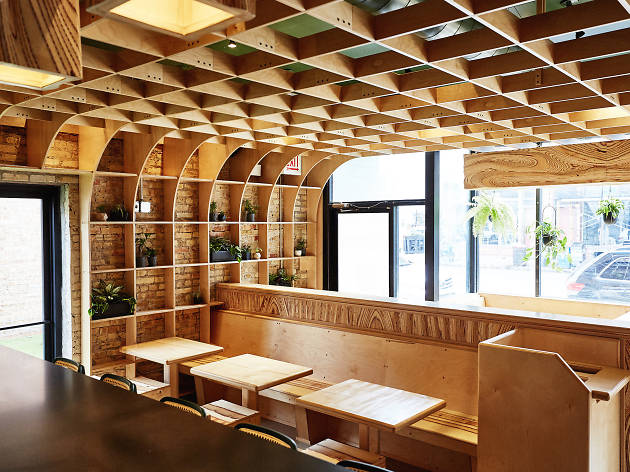 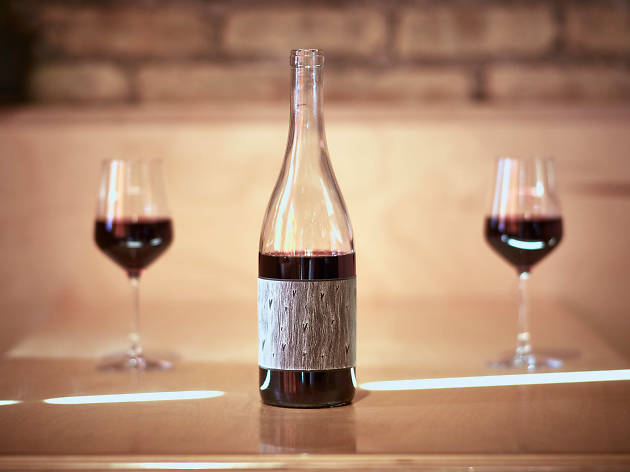 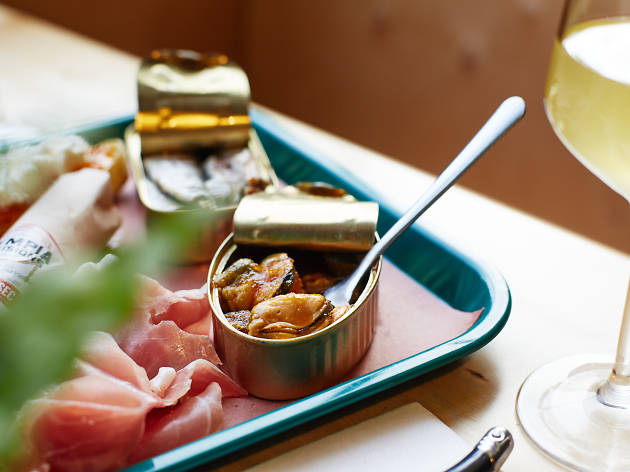 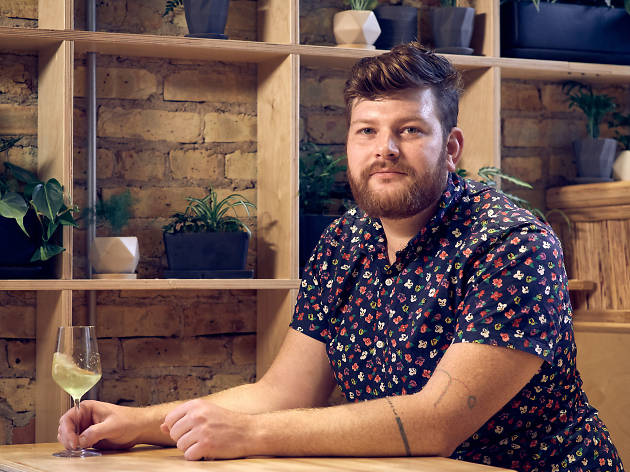 This very Midwestern wine bar pleases both casual and contemplative drinkers, thanks to its knowledgeable staff and a low-key vibe.

For a long time, the neighborhood joint and wine bar felt like opposing ideals. By definition, the corner bar—with its cheap draughts and worn-in look—is built on approachability, while wine bars historically seemed to ooze with pretense, reserved for those fluent in vino classification tables.

Thanks to inviting spots like Rootstock, Income Tax and Red & White, Chicago’s wine scene has grown more inclusive for those of us who don’t know much about the stuff beyond the fact that we like drinking it. New Logan Square watering hole Outside Voices takes that mission a step further, blurring the lines between the neighborhood tavern and a proper wine bar.

This delightful storefront is sandwiched between two other beloved spots from the same owners—gin-focused cocktail den Scofflaw and sporty pub the Moonlighter. Like its siblings, vino-centric Outside Voices leans pricier than your everyday pub, but the vibe is unmistakably no fuss.

Led by beverage manager Davis Sayer, the bar mostly eschews the pretense that often comes with wine—and not just because the staff has an affinity for flannel button-downs and playing Heart on vinyl. You feel it within 15 seconds of sidling up to the bar to peruse the menu. Rather than putting the onus on the drinker to decide on a style (Whites from France? Cabernets?), the daily-changing menu of whites, reds, rosés and orange, and bubbles focuses on individual flavors and textures in each of the 20-odd available wines. Bartenders take a similar tact, calling out choice descriptors from one or two wines—crisp, tastes like lemon peel—if you say you’re in the mood for a white.

This strategy might have to do with the unpredictability of small-batch, minimal-intervention wines, which are the focus here. On a recent visit, Sayer poured a cavey, chilled cabernet sauvignon blend that smelled like port wine and tasted like the vanilla-tinged aroma of pipe tobacco.

“I poured this for a guy the other night, and he said, ‘How dare you call this a cabernet?’” Sayer said. When I asked how he responds to those kinds of reactions, he shrugged, smiling, and replied, “With natural wine, the best way to figure out if you like it is to taste it. Just because that’s the name of the grape doesn’t mean it has to taste a certain way.”

On another night, my date and I furiously debated what to drink with our delicious, decidedly beige snack spread of fig-studded pork rillettes, baguette with butter, mixed olives and sumptuous, tinned Spanish mussels in vinegary escabeche. Should we stick with the Georgian orange wine my date was drinking, which tasted like honey, orange peel and tannic black tea?

Just then, I spotted a Lambrusco I’d never heard of on the menu. This one was cool, Sayer said, light but a little funky with notes of raspberry. The taster he poured looked like a cranberry juice cocktail—its tiny bubbles buzzed like berry-flavored applause on my tongue. It transported me to warmer days, and I gazed longingly at Outside Voices’s sprawling patio, currently blanketed in snow.

Better make it a bottle.

What to drink: Twentyish continuously changing wines by the glass (starting at $8) and bottle (starting around $40) focus on minimal-intervention pours. Helpful staff and mostly unpretentious descriptors make choosing a breeze.

Where to sit: Arrive early. This snug den houses just a handful of barstools and tables. Come patio season, a fenced-in wraparound deck will easily double the bar’s capacity.