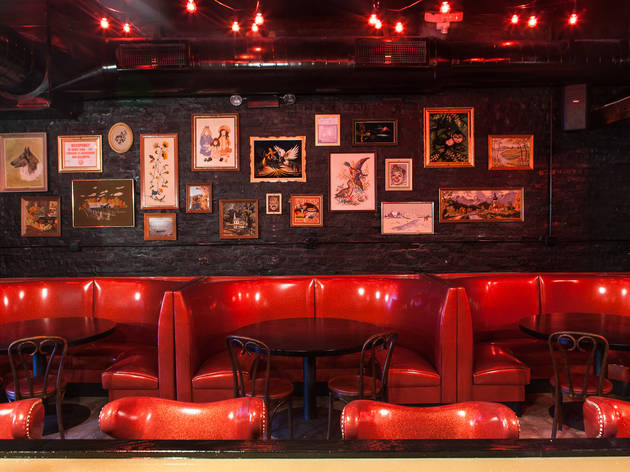 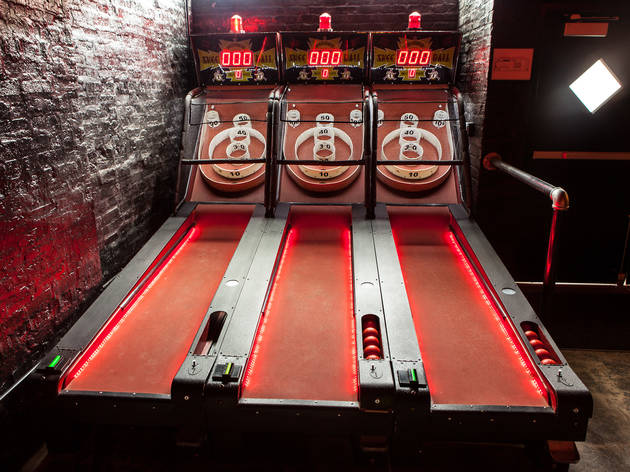 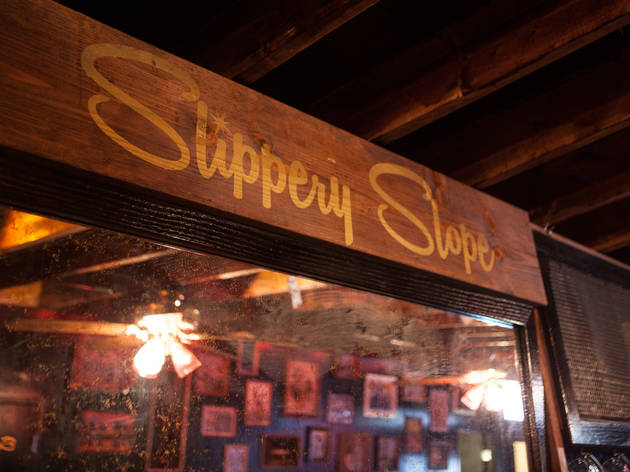 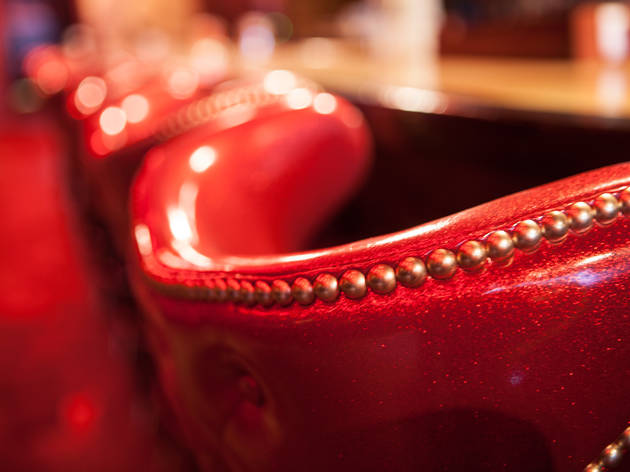 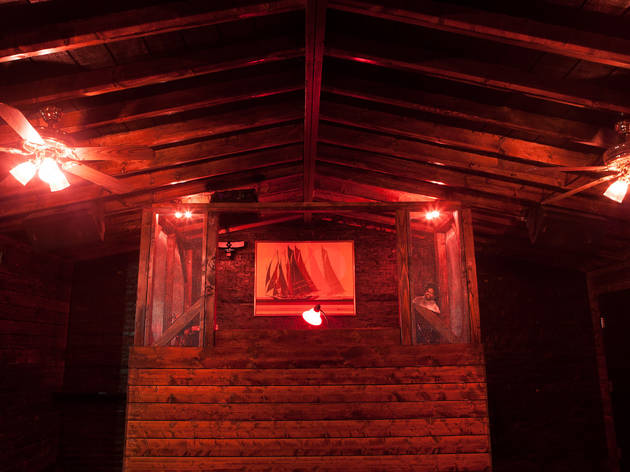 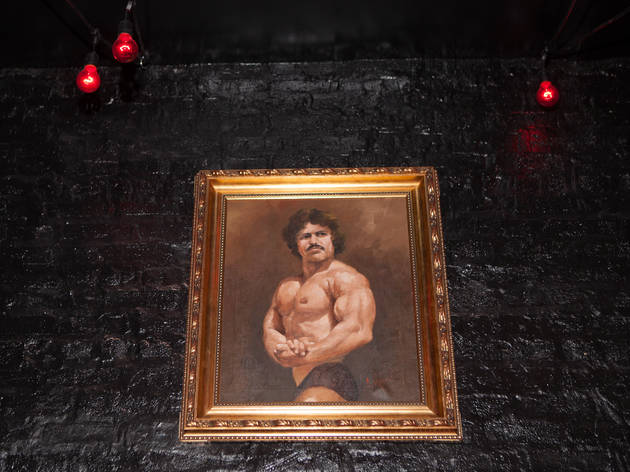 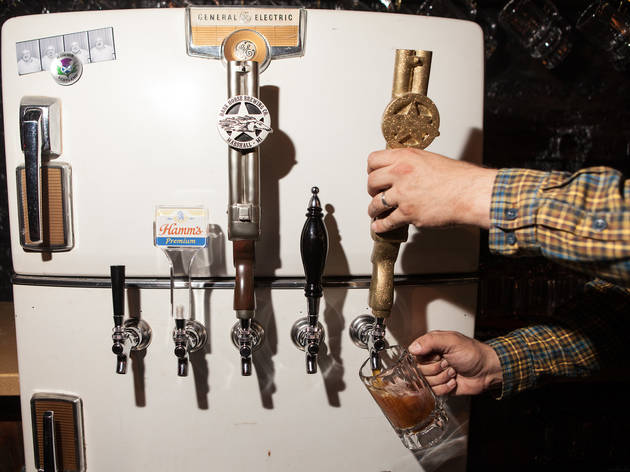 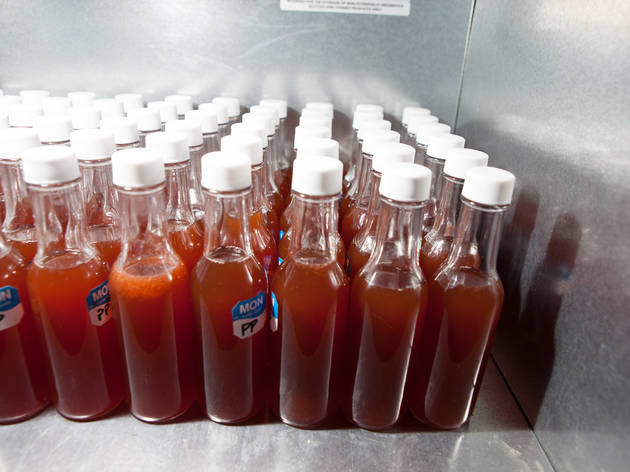 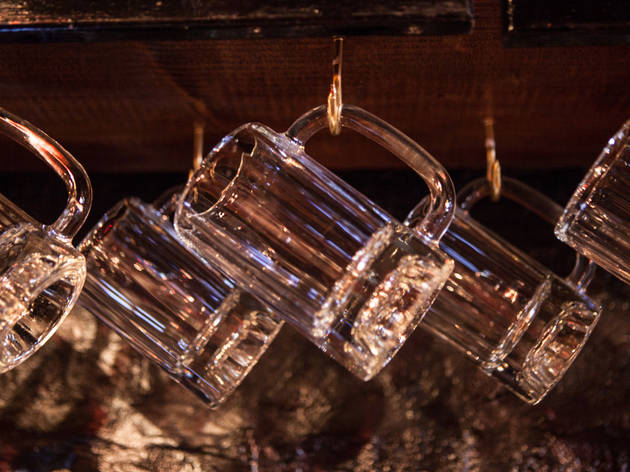 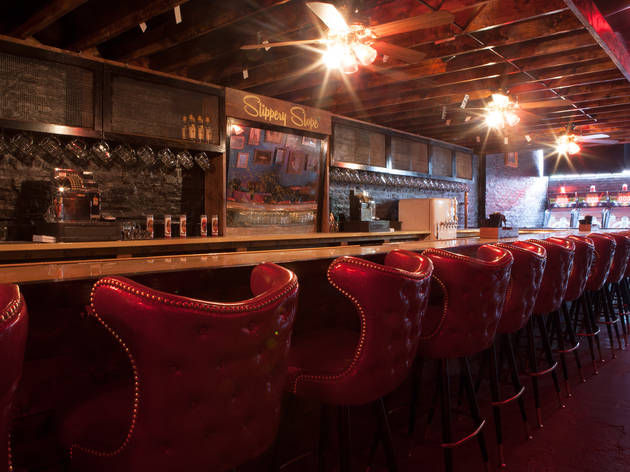 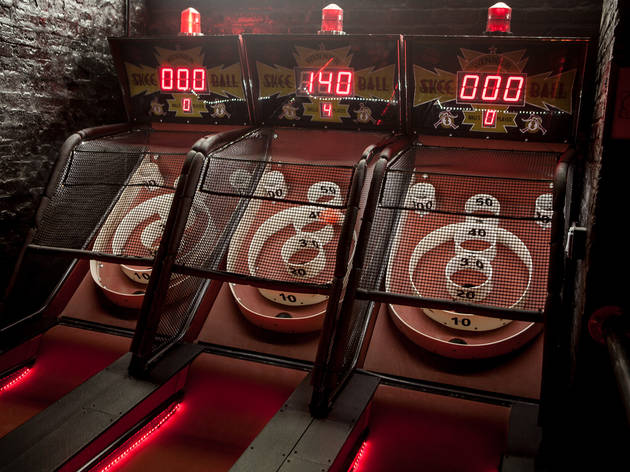 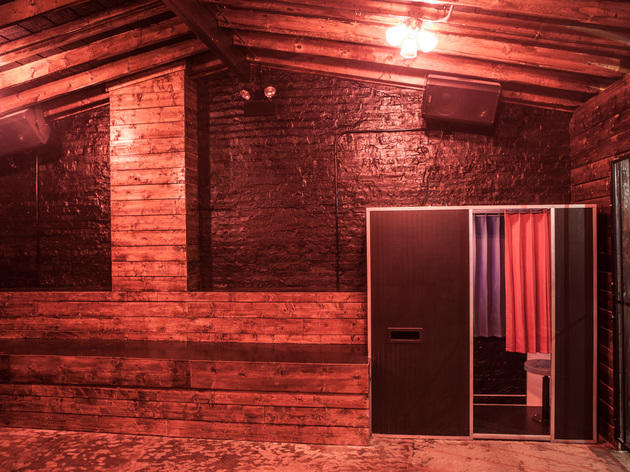 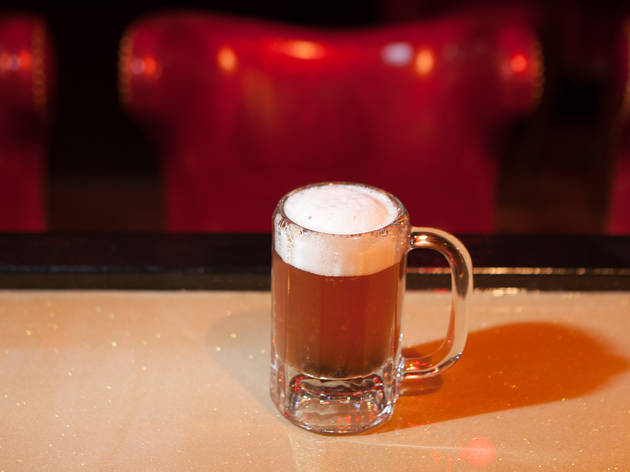 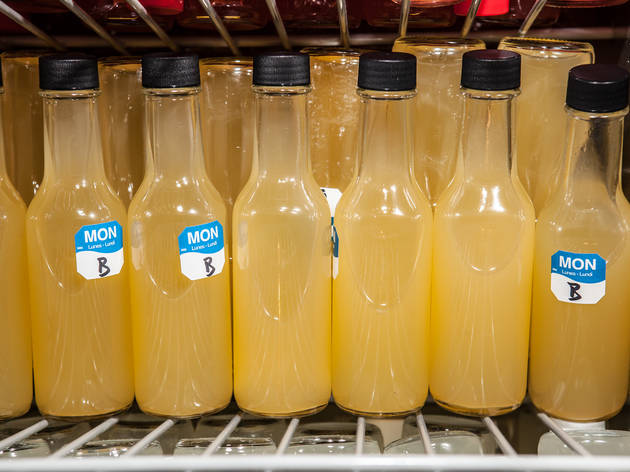 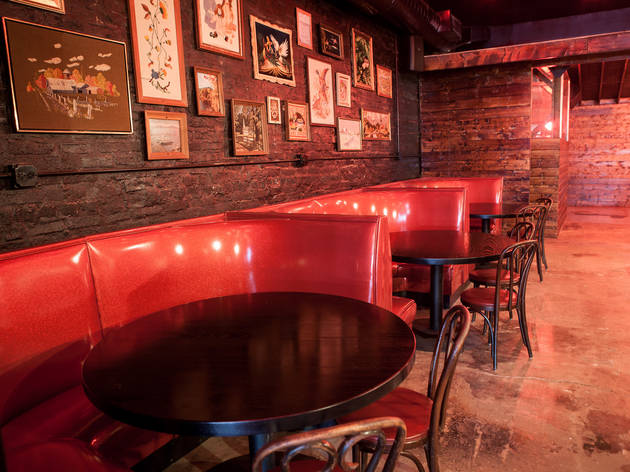 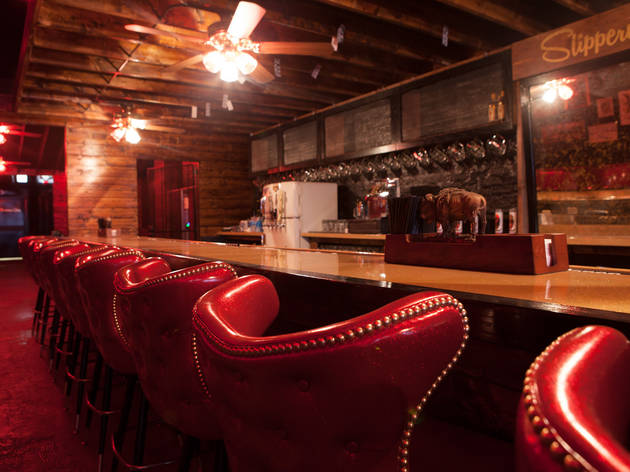 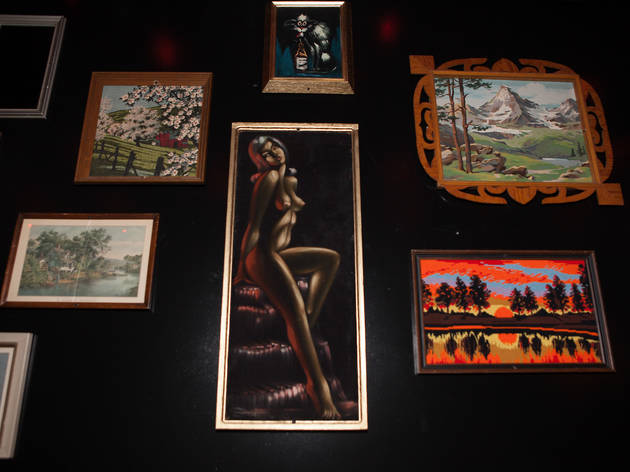 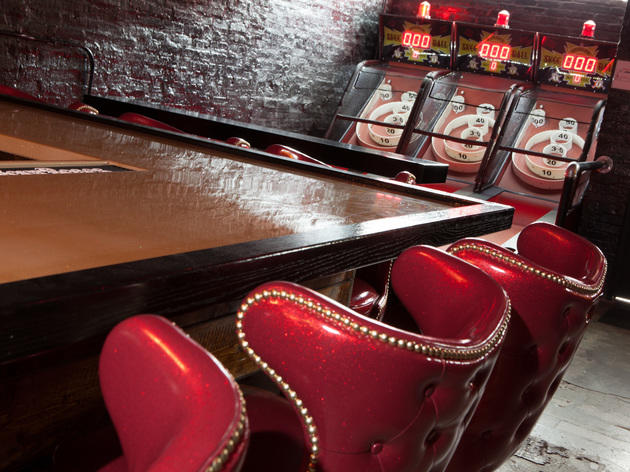 Logan Square’s late-night dance bar Bonny’s closed almost two years ago, but Chicago’s late-twenties crowd still has warm, fuzzy memories of piecing together nights at the dive through misspelled text messages and crumpled photo booth pictures fished out of back pockets. In May, the team behind Bonny’s, who later went on to open Scofflaw, opened Slippery Slope in the same spirit, with bottled cocktails, cheap beer, cozy booths and a dance floor tricked out with bleachers built for twerking.

Inside, the bar is pitch black with red lights that don’t flatter or offend but act as a great equalizer. Above a row of red vinyl crescent-shaped booths, vintage thrift-store oil paintings are bolted to the wall, which minimizes the threat of being stolen or knocked off when the space is packed. In the back there’s a dance floor with a photo booth, and even farther back, there’s a handful of barely lit, mischievously unisex bathroom stalls. There’s something about the atmosphere, or the drinks (or both) that if you find yourself making out in one of the booths or on the dance floor, it seems more of a natural progression than something you’ll regret in the morning.

Like most nightclubs, Slippery Slope can be an entirely different bar depending on the time and day you visit. For those who want to drink, dance and see-and-be-seen, go on the weekends. Friday and Saturday nights promise a 20-minute wait in a winding line of bachelorette parties, neighborhood regulars and baby-faced hipsters before being admitted to the raging dance megastorm inside. Weekday evenings are decidedly more chill, with plenty of room on the dance floor and a clear path to the bar, making Slippery Slope the ideal spot for a nightcap on a weeknight date. Any night of the week, you can usually find space at the Skee Ball machines, which are enormously fun, but at $1 a pop, get expensive fast.

The cocktail list, scrawled on the mirror behind the sparkly gold bar, is short but rotates often. The house cocktail is a version of the mostly forgotten classic Monte Carlo, which is made with bourbon and spicy-sweet Benedictine. Eight-dollar bottled drinks by Danny Shapiro (Scofflaw) are on rotation and are surprisingly strong. A recent favorite was the bright and boozy Summer Rose. The house beer is a $4 blueberry beer from Michigan’s Dark Horse Brewing Company called Barracuda Blue, which has blueberries garnishing the mug, and you can get a Hamm’s for $2.

Since opening in May, the food offerings at Slippery Slope have expanded from the original signature dish, a variation on the popular South Side favorite the Mother-in-Law. Here, it’s composed of a beef tamale smothered in spicy vegan chili and sprinkled with cheddar cheese, lettuce and a swirl of sour cream. Joining the menu is a chili dog and a Frito pie, a crushed bag of Fritos with the same chili and toppings. It’s not fancy but it’s just simple, quick, salty, hot drunk food. If you’re eating it, chances are it’s everything you want and need to survive until morning.

It’s hard to compete with nostalgia. For those of us who fondly remember Bonny’s, Slippery Slope will never be able to entirely fill the void. But for a new generation just coming of drinking age, there are sure to be many mornings post-Slope spent rehashing stories, nursing hangovers and smoothing the wrinkles out of their photo booth pictures.