The upcoming season at Porchlight Music Theatre will open with the first full production in Chicago of In the Heights, the 2007 musical by Lin-Manuel Miranda and Quiara Alegría Hudes, to coincide with the Chicago opening of Miranda's current smash hit Hamilton.

In the Heights, which took home four Tony Awards including best musical in 2008, will run September 9–October 16. Porchlight's season will also include the long overdue Chicago premiere of The Scottsboro Boys, the last musical written by the Cabaret and Chicago songwriting team of John Kander and Fred Ebb to appear on Broadway, in 2010. The Scottsboro Boys, about the nine black boys falsely accused of raping two white women in Alabama in 1931, is not to be confused with Mark Stein's earlier play Direct from Death Row The Scottsboro Boys, which Raven Theatre produced last year and will remount this summer. Porchlight's Scottsboro Boys will run February 3–March 12, 2017.

Elsewhere in Porchlight's season are the Chicago premiere of End of the Rainbow, Peter Quilter's play-with-music about the waning days of Judy Garland, to run November 4–December 4, and the 1980 Stephen Sondheim revue Marry Me a Little, which uses "trunk songs" from Sondheim's catalog to illustrate a night in the life of two lonely, single neighbors. The latter production, running April 14–May 21, 2017, will feature Porchlight artistic associate Austin Cook. Other than Cook, no casting or creative teams have been announced for the season.

The "Porchlight Revisits" staged-reading series will include The Rink (October 4–6), Little Me (February 28–March 2, 2017) and On a Clear Day You Can See Forever (May 9–11). All performances take place at Stage 773; Porchlight's current production, Far From Heaven, continues there through March 13. 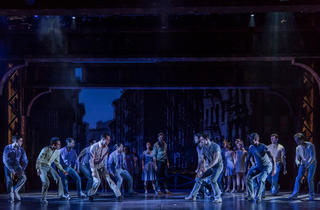 Kris is a Senior Editor at Time Out Chicago, covering theater and dance, comedy and LGBT events. He can give you the best CTA route to every theater in the city, and you can probably find him at one of them tonight. Follow him on Twitter at @krisvire.