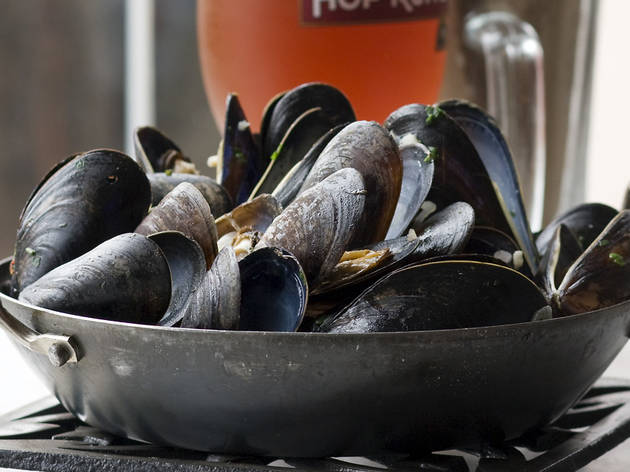 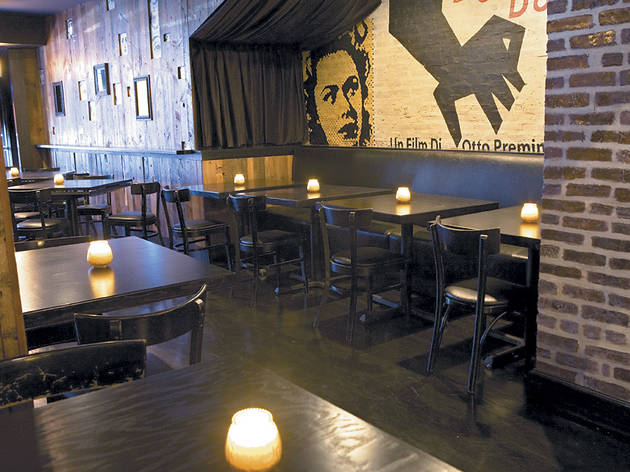 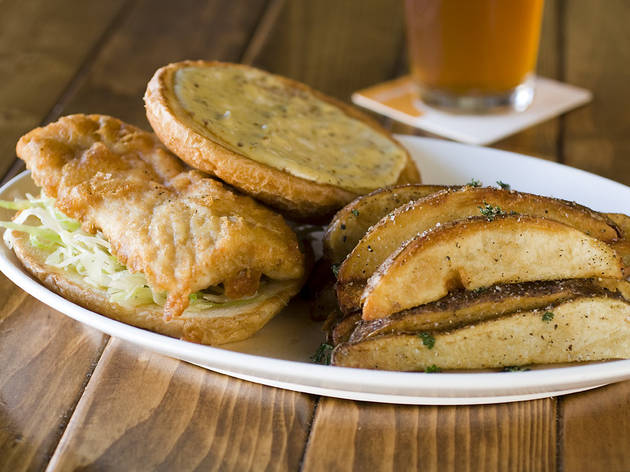 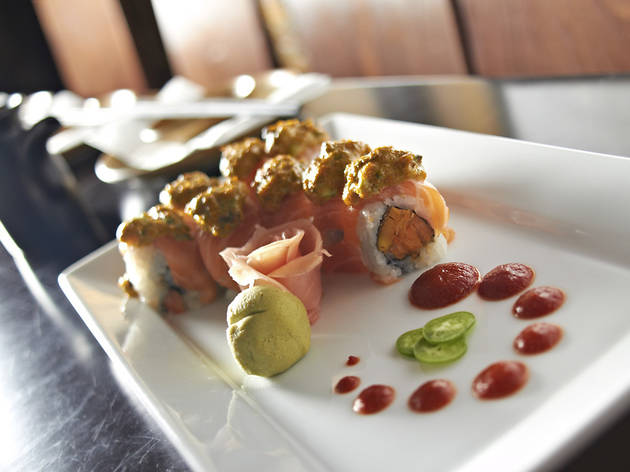 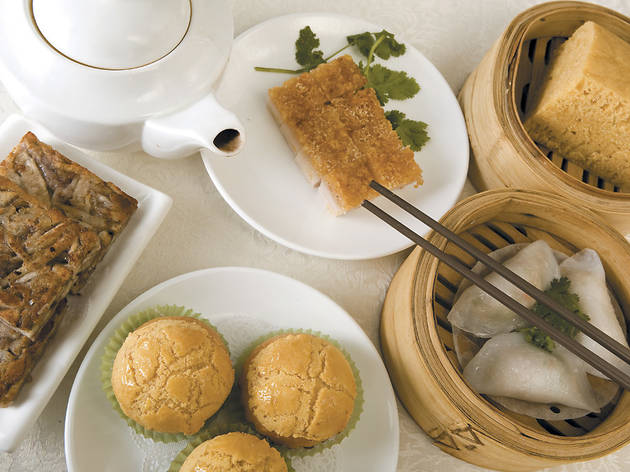 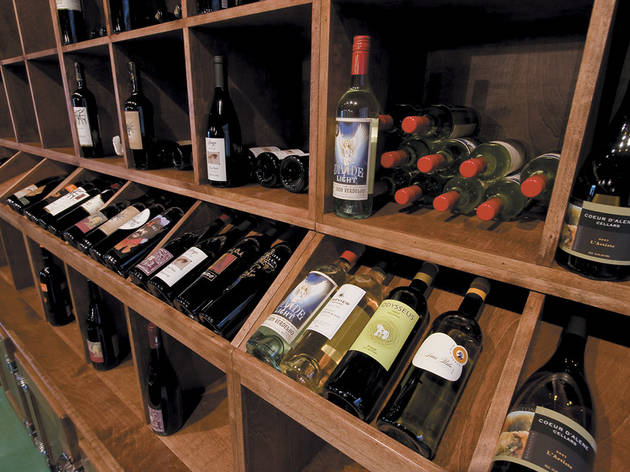 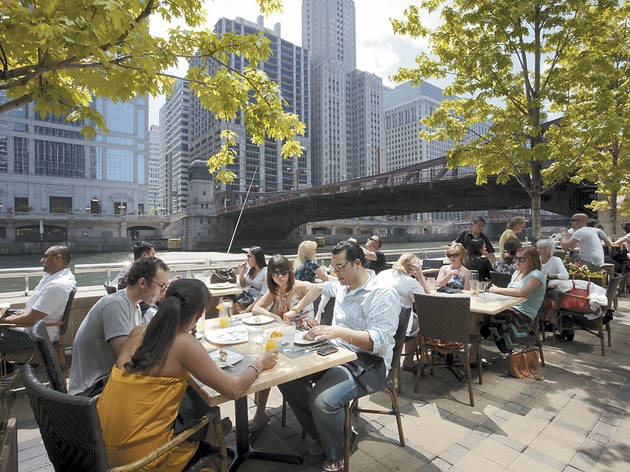 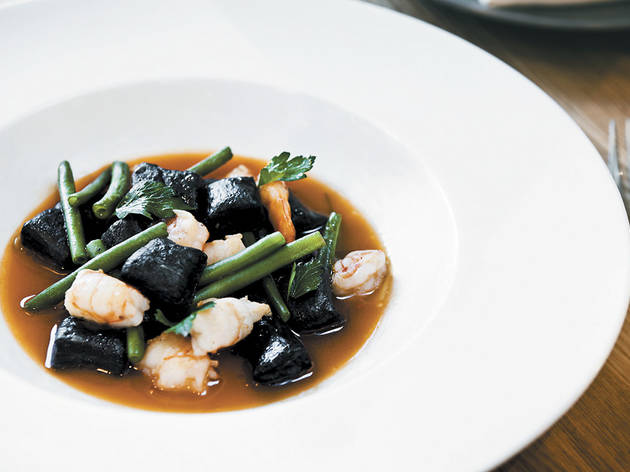 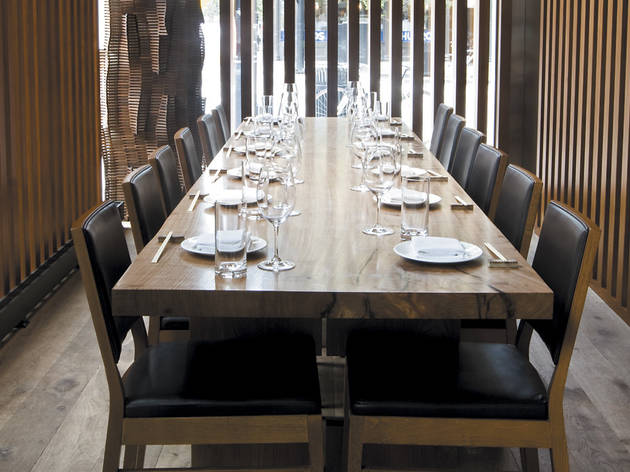 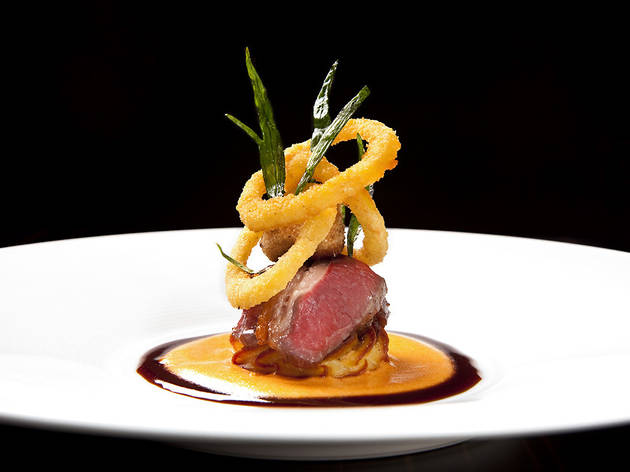 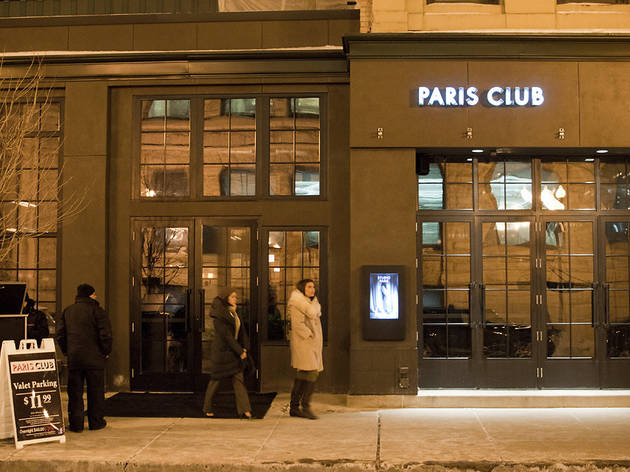 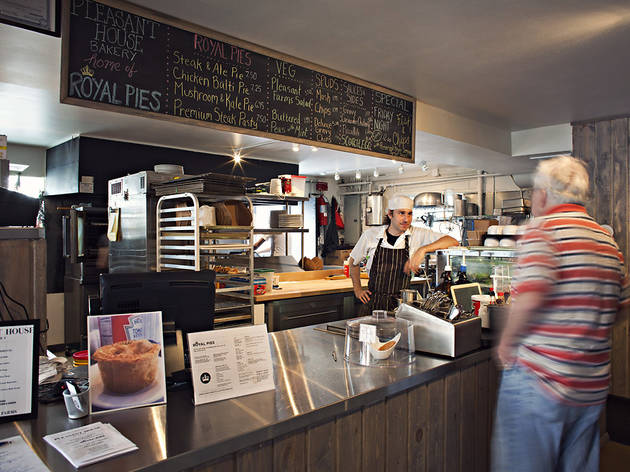 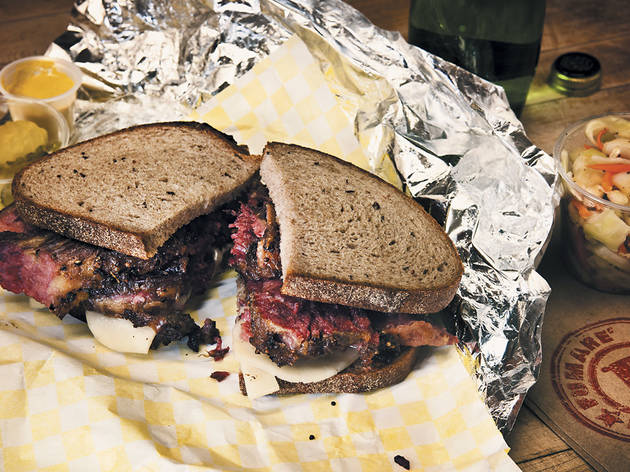 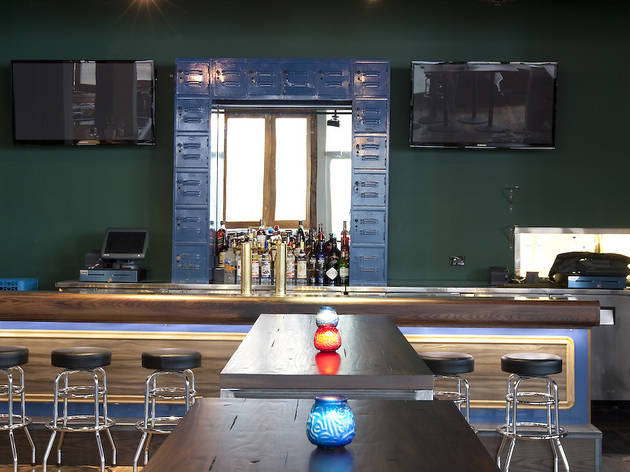 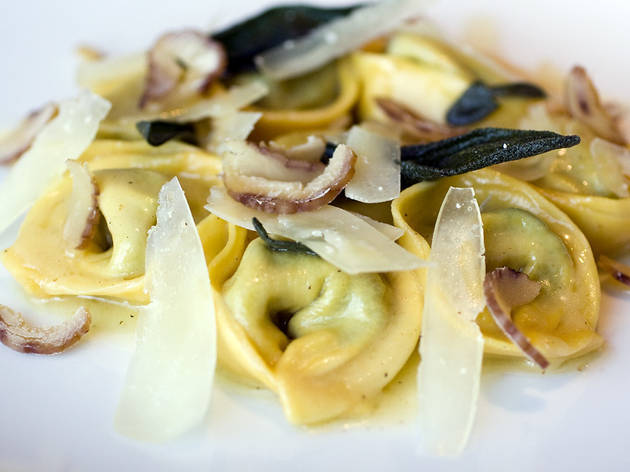 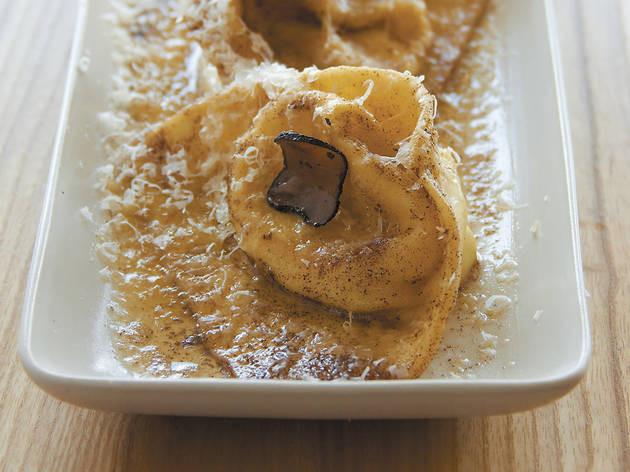 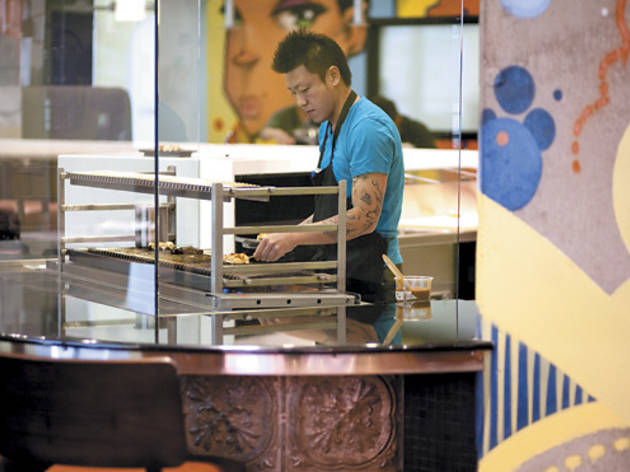 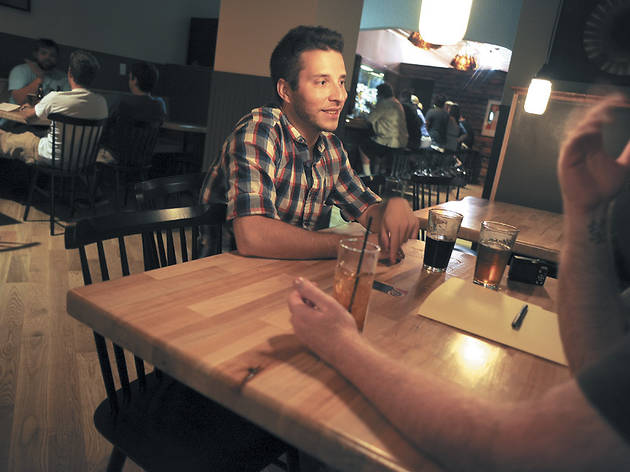 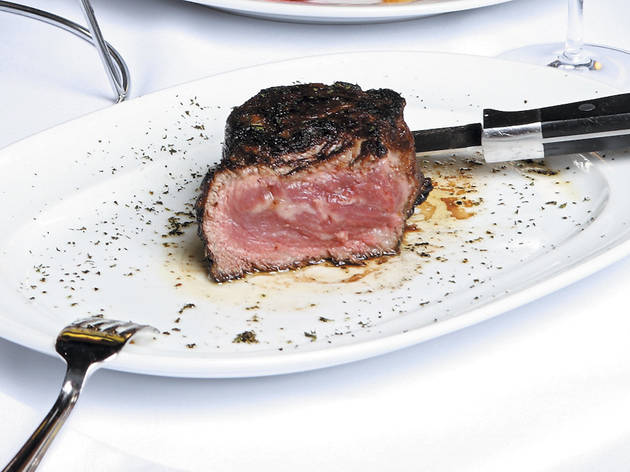 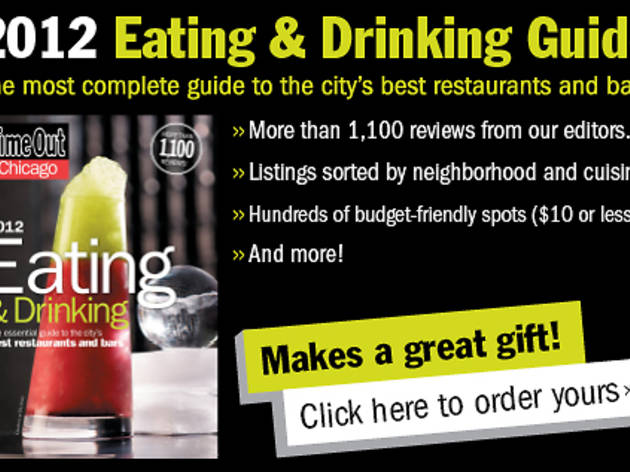 Moules + frites at Leopold
With a joint like Hopleaf in this town, it takes balls to make a big deal out of your mussels. But that’s what Leopold does, and guess what? These things just may be the tenderest, most delicious mussels Chicago has seen yet.

Chicken-thigh pizza at Three Aces
Everybody knows that thighs are the best part of a chicken. And everybody knows that, at the end of the day, there’s really nothing more satisfying than a well-made pizza. But it took chef Matt Troost to know to put the two together.

Triple S at Seadog Sushi
No. 1 on our list of guilty pleasures: this maki, whose combination of sweet potatoes, salmon and something mysteriously called “spicy dynamite sauce” is everything that is wrong with sushi. And it tastes so, so right.

Macau pork belly at MingHin
Chef Wu Ming jumped into the Chinatown scene this year with stellar seafood and an awesome dim-sum lineup, but his most buzzed-about feat was making us care about pork belly again, accomplished by crisping the skin like candy and cooking the flesh into silky submission.

Croque-madame at Lush West Town
With little more than a hot plate, a panini press and a deep fryer, Lush has developed one of the most craveworthy menus of drinking snacks in the city, though this sandwich—ham, cheese, béchamel, egg—is certainly no snack. It’s filling and rich enough to do you in for the night. (Foodwise, that is. You’ll be plenty primed for wine.)

Bridge House Burger at Bridge House Tavern
In a city where people are throwing pastrami and hot dogs on their burgers, this burger is rebellious in its restraint (just American cheese, lettuce, onion and tomato), classic in its conception (a double stack of thin patties) and on-point in its execution. None of that keeps it from being absolutely enormous.

Squid-ink gnocchi in carrot broth at GT Fish & Oyster
Yeah, yeah, yeah, it’s a seafood joint. “Fish & Oyster.” We get it. But chef Giuseppe Tentori is first and foremost an Italian, and as deft as he is at searing halibut, where the guy really shines is with pastas such as this rich yet delicate gnocchi. Which is fortified with squid ink and topped with shrimp, so, hey, maybe this is a seafood dish after all?

Chef’s selection steak at Roka Akor
Slick, sceney and sexy has its price, but it is possible to get out of this Japanese steakhouse with your rent money intact. Go for the chef’s selection, a rotation of overlooked and often unknown cuts. They’re beautifully marbled, expertly grilled over Japanese binchotan charcoal, and the best value in the house.

Lamb course at Next: Paris 1906
Since tickets to Next’s opening menu were so difficult to get, and since even a regular ticket didn’t guarantee receiving this course—available only on the even-more-rarefied Kitchen Table menu—and since there is no way to have this dish again (unless you count preparing it at home from the e-cookbook), it seems completely wrong to include it on this list. But it was the highlight of a meal that was itself a highlight of the year, so it’d be just as wrong to leave it out.

Chilled seafood platter at Paris Club
Leave it to the Lettuce Entertain You restaurant group to find a way to turn a luxurious platter of fresh lobster, shrimp and scallop-uni tartare into a $15.95-per-person steal.

Competition St. Louis slab at Chicago Q
The crew at this fancy-pants barbecue establishment claims the difference between these “competition” ribs and the regular versions (essentially, what warrants the $9 upcharge) is these take two additional hours of labor because they’re pulled out of the smoker periodically to baste. We say pay those pit masters for overtime, because these bones are killing it.

Fried chicken dinner at Club 81 Too
There’s no better place for a slice of small-town life than this 66-year-old Hegewisch bar/supper club. Dinner is served only Wednesdays and Fridays, and the kitchen closes at 8:30pm, but the limited window is worth hitting for some of the best fried chicken around (be sure to order it “all dark” for ultimate juiciness—breast meat tends to dry out when fried).

Mushroom and kale pie at Pleasant House Bakery
Art Jackson and Chelsea Kalberloh Jackson’s Bridgeport storefront is one of our favorite openings of the year: It’s understated, authentic and charming, just like this individual savory pie.

Montreal-style smoked pastrami at Fumare Meats & Deli
There is pastrami (thinly sliced, meagerly seasoned) and then there is the smoked meat of Montreal legend: thick, hand-cut slices, edges lined with cracked black pepper, the meat gorgeously marbled and fall-apart tender.

Jucy Lucy at the Anthem
Oh, man, we do not need to remind ourselves how good this juicy, greasy, medium-rare burger oozing Velveeta cheese is.

Swiss chard tortelloni at Due Lire
Let us say right off the bat that these chard-stuffed pasta pockets—tossed in sage brown butter with smashed bits of roasted chestnuts—aren’t currently on the menu at this cute Lincoln Square spot. But we strongly encourage you to start a petition to bring them back. We pledge to sign it if you do.

Goat-cheese tortalacci at Autre Monde
Though any of the housemade pastas from this humble trattoria could have landed on this list, these pockets of delicate tortalacci stuffed with goat cheese and topped with a shaving of black truffle are like tiny, edible presents to Berwyn, to pasta lovers, to everyone lucky enough to get their hands on them.

Home-fed chicken Xiang Xi–style at Lao Hunan
Is Tony Hu at home feeding little chickens before bringing them here, his latest Chinatown spot, to be stir-fried with a sneeze-inducing array of peppers and Szechuan peppercorn? Doubt it. But we don’t care about the misleading translation when the result is one of Hu’s best signatures.

Duck fat yaki soba noodles at Union Sushi
Frat boys and noodles—who knew they made such a good match? This is a bowl of everything you could ask for: thick, satisfying noodles slicked in mustard sauce, fatty morsels of duck and crunchy slivers of cabbage, all finished with the bright addition of ginger.

Braised rabbit at Custom House Tavern
Peas and rabbit. Is that some kind of twisted joke, serving rabbit with the very things it loves to eat (before it’s roasted)? Whatever. Executive chef Perry Hendrix can make any joke he likes—we’ll still follow him anywhere, particularly in spring, when he uses the lowly pea’s earthiness as a respite from this dish’s deep, meaty savoriness.

Kimchi and sausages at Maria’s Packaged Goods and Community Bar
Every Monday during the warmer months this year, Mike Marszewski fired up the grill at this Bridgeport bar run by his brother, Ed, and mother, Maria. Bobak’s sausages were tossed on the grill then pulled off to be topped with kimchi, sometimes made by the guys’ aunt and occasionally a chef such as Bill Kim. Like the brothers themselves, it’s a Polish-Korean mash-up and the best of both worlds. (Look for the free grub to reappear occasionally over the winter.)

Grilled green tea–washed mackerel pike at Lure Izakaya
Please, we beg you, go to this Chinatown izakaya, or Japanese gastropub, now. If you don’t, we fear that chef-owner Kee Chan’s underappreciated ode to grilled seafood and modern Japanese small plates will suffer certain death—and then we can’t have this insanely good, expertly grilled, full-flavored fish again.

Scallops at Morso
The accompaniments (corn-poblano hash on our first visit) change with the seasons. The flawlessly seared scallops are here to stay.