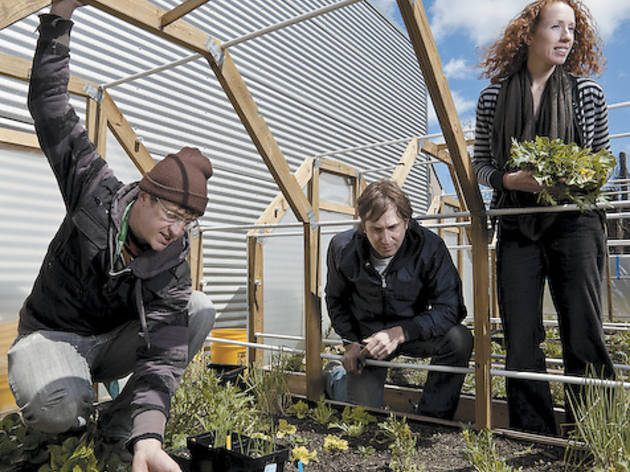 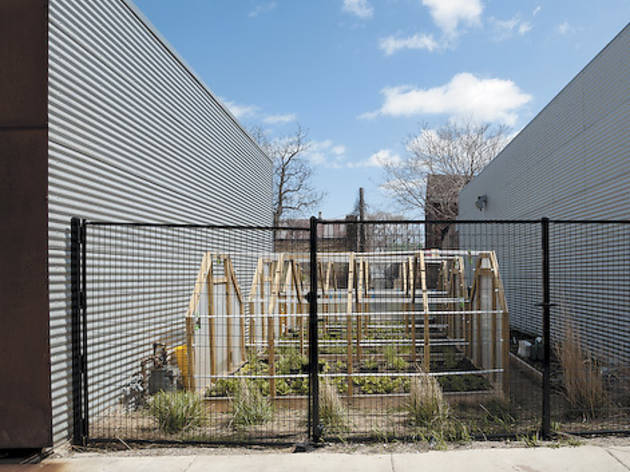 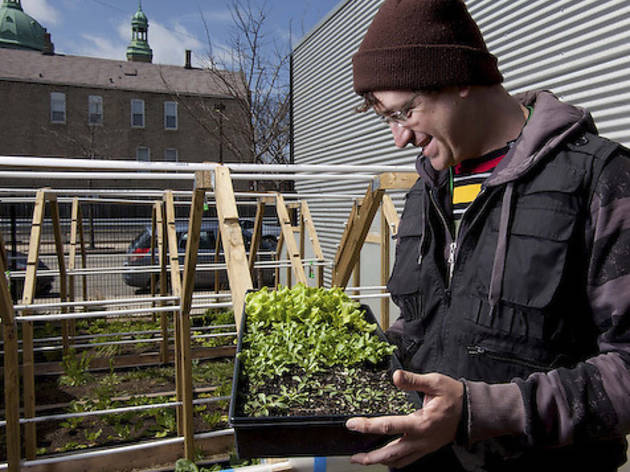 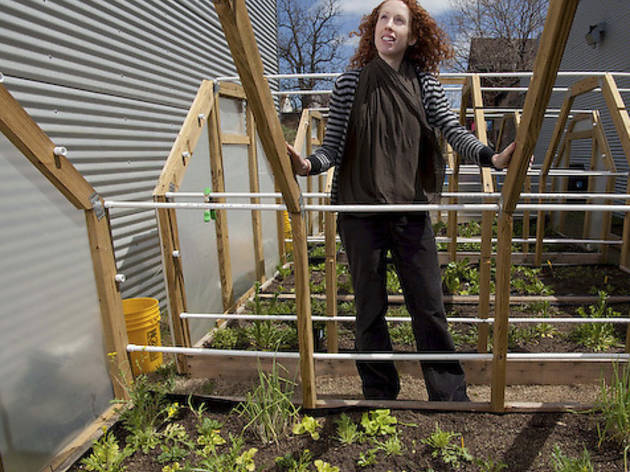 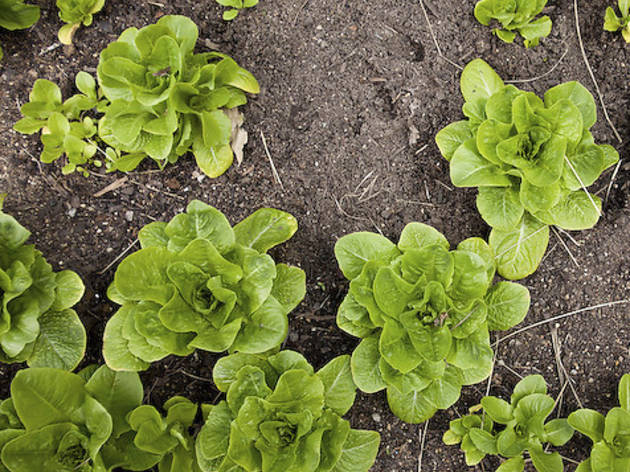 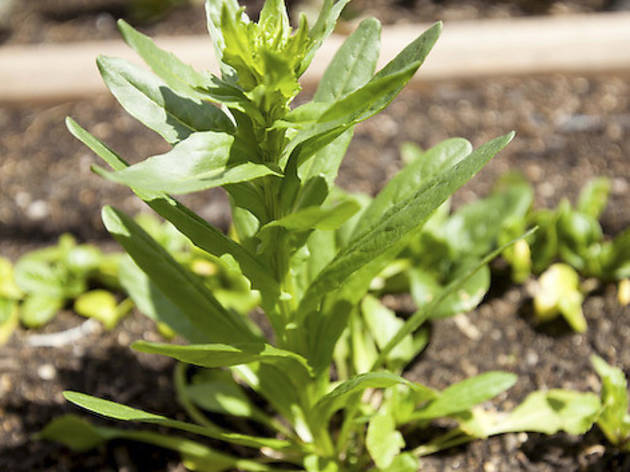 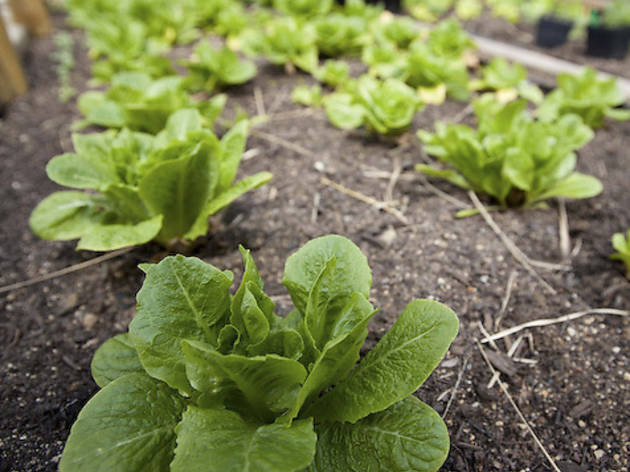 It’s a small plot of grass on a typical Bridgeport block, which is to say a block filled with cement, brick and steel. This particular plot—a corner of somebody’s yard, really—sits between two modern buildings with curvy steel siding; a fence separates it from the sidewalk. Behind the fence are four small wood greenhouses, each one holding a raised bed. And each raised bed is peppered with greens waiting to be harvested. The sight is such a striking contrast to the rest of the block that people walking by stop to inquire about it every day. “I love it when people ask about it,” says Morgan Kalberloh, the caretaker of the plot. Should anybody ask what the plot is called, he tells them it’s Pleasant Farms.

People who read food blogs may know of one called Pleasant House. They may even know that the writers of the blog, married couple Art Jackson and Chelsea Kalberloh Jackson, will soon open a bakery under the Pleasant House name at 964 West 31st Street, next to Maria’s Packaged Goods and Community Bar. But few know Pleasant House is also in the farming business (under the name Pleasant Farms). The plot in Bridgeport is just one of several where Jackson and Kalberloh Jackson have planted vegetables they’ll use in the bakery. There’s another plot in Pilsen and a third outside the city.

“Pleasant House is a symbol,” Jackson says. It’s “a house that’s more than just a place to live. There’s always food on the table,” and crops in the garden. It is also the name of an actual house in Yorkshire, England, that Jackson’s grandfather fixed up and where Jackson’s father was born. That physical structure has an influence on the Pleasant House brand (the bakery, which will specialize in savory pies, will have what Jackson calls a “British undercurrent” to it), but it’s the symbolic Pleasant House—the one that sustains its occupants’ shelter, food and even hygiene needs (more on that in a minute)—that informed the idea of Pleasant House/Farms.

Jackson and Kalberloh Jackson grew up in the country (Jackson in Illinois, Kalberloh Jackson in Kansas), and though neither of them were farm children per se, their upbringings instilled in them a desire to live off the land. “We want to show how far you can stretch fresh food,” Jackson says. (That includes stretching it beyond edible uses. Because, yes, Pleasant House is also a line of soaps and other beauty products—lemon verbena bars of soaps, lemongrass “sugar sticks” for the bath.) And so when this chef (Jackson opened Bijan’s Bistro, where he is still the executive chef until the bakery opens full-swing) and writer (Kalberloh Jackson has worked at a number of magazines, including 1000 Words and Revolution) decided to open a bakery, they never once thought of doing it without building a farm as well. So after they secured the space next to Maria’s—a result of being hooked up with Brideport advocate Ed Marszewski—they started working on persuading Kalberloh Jackson’s brother, Morgan, to move to Chicago. Morgan had been running gardens in Florida. Now he presides over the crops Jackson and Kalberloh Jackson planted last year and were wintered over: kale, radishes, spinach, Swiss chard, arugula, onions, and herbs.

The fact that Pleasant House/Farms is in Bridgeport is probably not a talking point lost on Marszewski, whose longtime mantra has been that Bridgeport is the “community of the future.” But for Jackson and Kalberloh Jackson, it’s more complicated than that. Their bakery will support the farm, which of course will support the bakery with ingredients (if not money). But the farm’s products will also be available at the Pilsen farmers’ market. Soon, the land behind the bakery will be added to the farm’s network of plots, meaning more vegetables for the bakery, and more vegetables for sale. One day, the farm could support the bakery, and the bath products, and whatever other businesses the couple have in mind. It’s a business cycle that is maybe new for Bridgeport, and may be new for most of Chicago’s neighborhoods. But not for, say, the original Pleasant House in Yorkshire. So while Jackson and Kalberloh Jackson are happy to be part of the Community of the Future, “it’s also,” Jackson says, “about the past.”