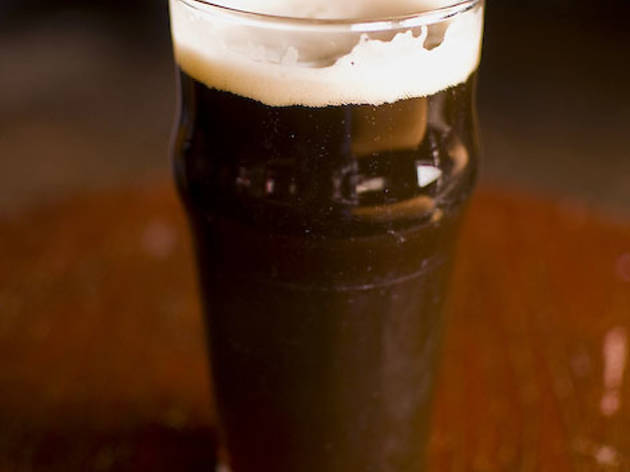 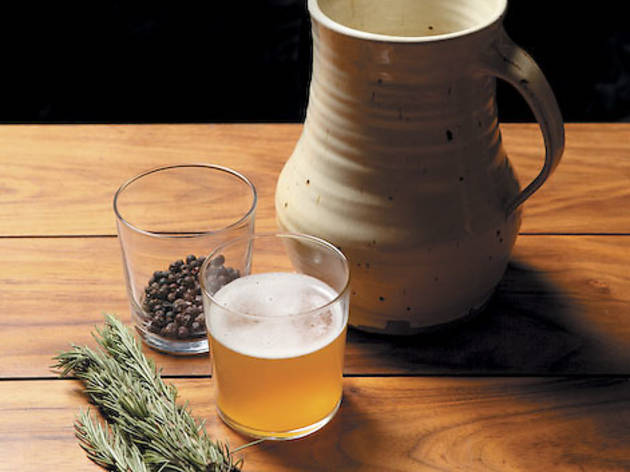 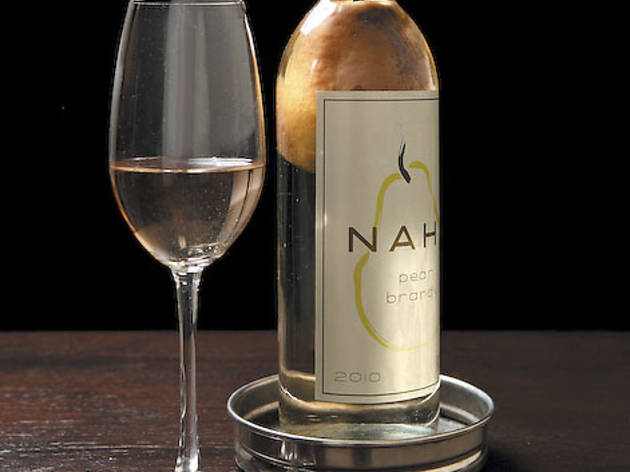 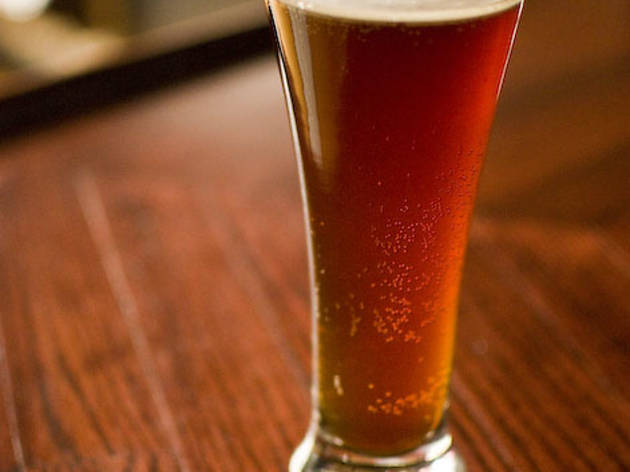 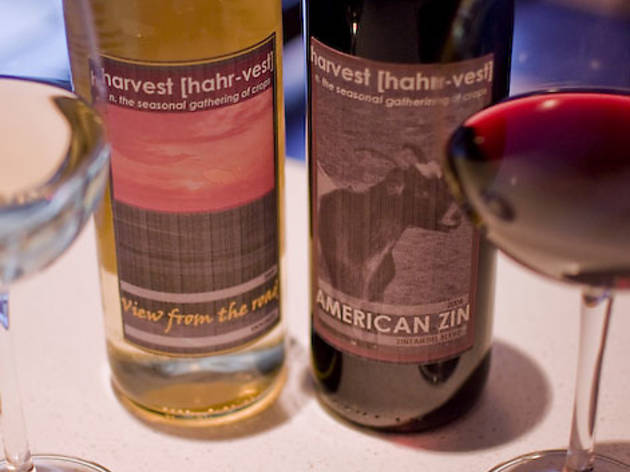 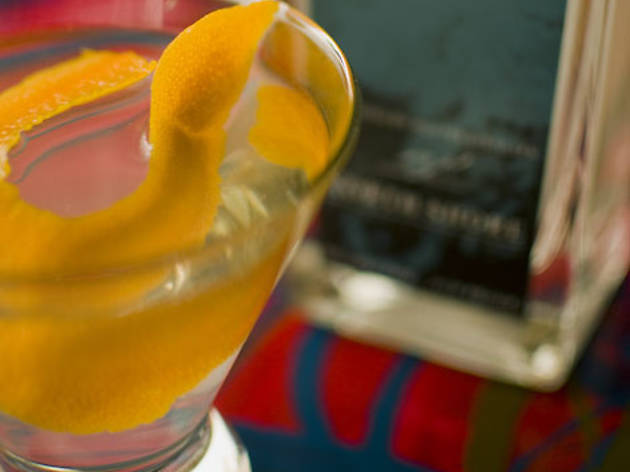 6/8
No Drama Gin at Inovasi 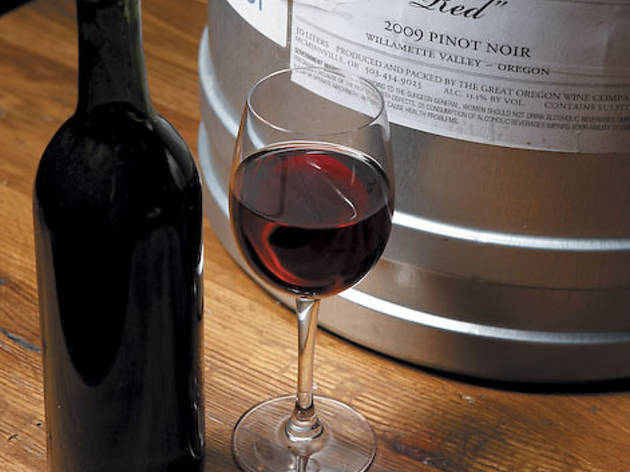 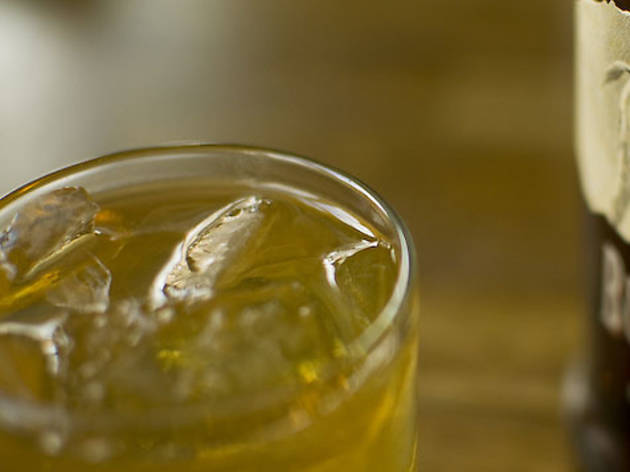 Pear brandy at Naha
When Seedling Farms’ Peter Klein e-mailed chefs asking for special growing requests, Naha chef Carrie Nahabedian sent him a picture of pears grown in bottles in Calvados, France. Klein immediately started experimenting with affixing bottles to pear trees, and the next harvest season, when the pears were mature, Nahabedian selected a brandy from Koval, then let the bottle-trapped pears infuse the brandy in a dark space for three-and-a-half months. The final step was the label, designed by Nahabedian’s cousin Tom Nahabedian. 500 N Clark St (312-321-6242). $12/glass.

No Drama Gin at Inovasi
During staff training at North Shore Distillery in Lake Bluff, chef John des Rosiers tasted gin right off the still—at about 150 proof—and was surprised by how drinkable it was. “The aromatics were just exploding out of it,” he recalls. Over the next few months, he collaborated with North Shore to create its Distiller’s Gin No. 6 at a higher (110) proof, which des Rosiers found brought out a little more of the orange peel and thyme flavors. No Drama can be ordered on the rocks at Inovasi or by the bottle to take home, and North Shore also bottles it under a different label, Mighty Gin, for a small number of bars, such as the Drawing Room. 28 E Center Ave, Lake Bluff (847-295-1000). $10/glass, $33/bottle.

Vodka at In Fine Spirits
Vodka by definition is a neutral spirit, but Shane Kissack, the owner of this wine and spirits store and bar in Andersonville, approached North Shore Distillery to see whether Derek and Sonja Kassebaum could make something a little different. As opposed to North Shore’s clean, smooth vodka, the In Fine Spirits vodka has a sugarcane base. “This has a little more body, a little more character, a little personality,” Sonja explains. 5418–5420 N Clark St (773-334-9463). $8/2-ounce pour, $9 in a Moscow mule, $24/bottle.

Lambic doux at the Publican
Michael McAvena, the Publican’s beer director, encountered lambic doux at the Brussels café La Bécasse, where barrels of lower-quality lambic are sweetened, spiced (doux means “to soften or to sweeten,” he explains) and served in earthenware jugs. When McAvena returned home, Publican owners Paul Kahan and Donnie Madia commissioned their own pitchers and began blending lambic with white beer, candy sugar and spices (such as cardamom and microhops, or juniper and rosemary) in five-gallon kegs once a week, and serving it in the shared jugs. 837 W Fulton Market (312-733-9555). $20/.75-liter pitcher, $38/1.5-liter pitcher.

Nanobrews at iNG
In typical Homaro Cantu fashion, it’s hard to keep track of all the components of his latest restaurant, iNG. But at least one facet of it is a “nanobrewery,” in which the brewer, Trevor Rose-Hamblin, leads collaborative beer-making experiments in batches small enough that “we’re not going to cry if we mess up once,” he explains. Which comes in handy when you’re putting out a beer made with espresso and doughnuts, an IPA with curry spices and a brown ale made to resemble an Old Fashioned (orange peel, maraschino cherries, Peychaud’s bitters and all). 951 W Fulton Mkt (855-834-6464). $15/flight of five.

House beers at Mary’s Rec Room
When Hamburger Mary’s owners Ashley and Brandon Wright expanded to the space next door about a year and a half ago, they carved out an area in the sports bar for beer tanks so Brandon, an avid home-brewer, could bring his hobby to the late-night crowd. In addition to three mainstays (an organic golden ale, an amber ale and the Mary Hoppins pale ale), Brandon fills a fourth tap with a rotating seasonal beer (currently the Capone, an 8.1 percent alcohol double imperial amber) and uses smaller tanks for limited-edition bottled beers such as the gluten-free Goldilocks. 5402 N Clark St (773-784-6969). Drafts $4.50, bottles $4.75–$6.

Pinot gris and pinot noir on tap at Paris Club
Lettuce Entertain You heirs R.J. and Jerrod Melman wanted to make French dining approachable, and what better way to demystify wine than serving it on tap? While the practice is common in restaurants in wine-growing regions, Lettuce had a harder time finding a winery that would ship kegs to Chicago. But Stone Wolf Vineyards in McMinnville, Oregon, designated a pinot gris and pinot noir for Paris Club, which began going through a recyclable keg of tap wine a night. 59 W Hubbard St (312-595-0800). $7/glass and $28/bottle for white, $8/glass and $30/bottle for red.

Custom-blended Silvertap wine at ENO
Scott Harney, senior wine director at ENO at the InterContinental Chicago, traveled to Silvertap Wines in Sonoma, California, a few months ago to create two custom blends for his bar: a white blend of sauvignon blanc and chardonnay, and a multivintage red blend of merlot, cabernet sauvignon and a little zinfandel. The wines (which are slated to arrive at ENO this week) are stored in tanks, shipped to the hotel (Harney estimates it will cycle through two kegs, each holding 26 bottles of wine, every two weeks), and then sent back to California to be refilled, saving tons of waste a year, Harney predicts. 505 N Michigan Ave (312-321-8738). $9/glass.

House wines at Harvest
Using its hotel real estate to its advantage, this restaurant in the Chicago Marriott Downtown Magnificent Mile turned a portion of its rooftop into a garden, which grows hops (among other produce) and also houses beehives maintained by Greg Fischer of Wild Blossom Meadery and Winery in Beverly. With Fischer’s help, chef Myk Banas extends his DIY mentality to creating house wines for the restaurant each year, including a viognier, a zinfandel and a cabernet. 540 N Michigan Ave (312-836-0100). $7/glass.