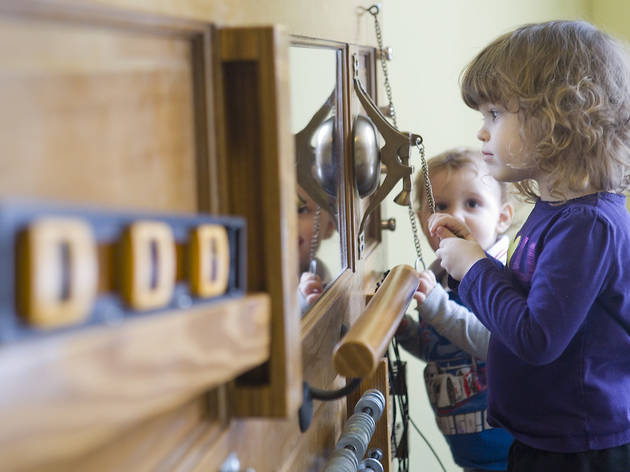 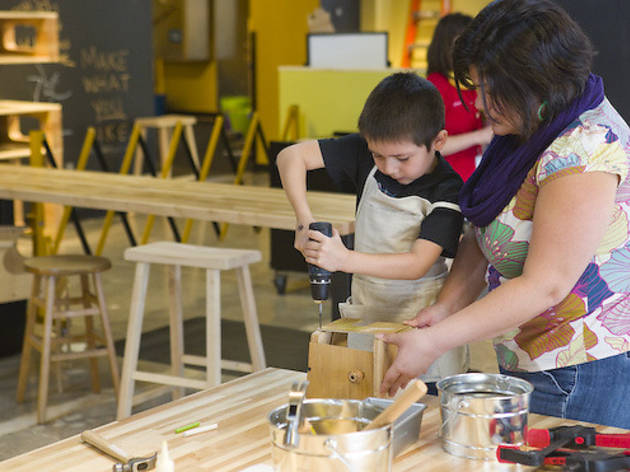 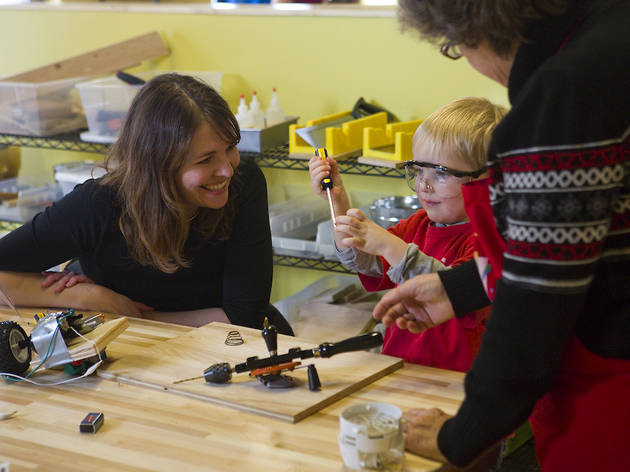 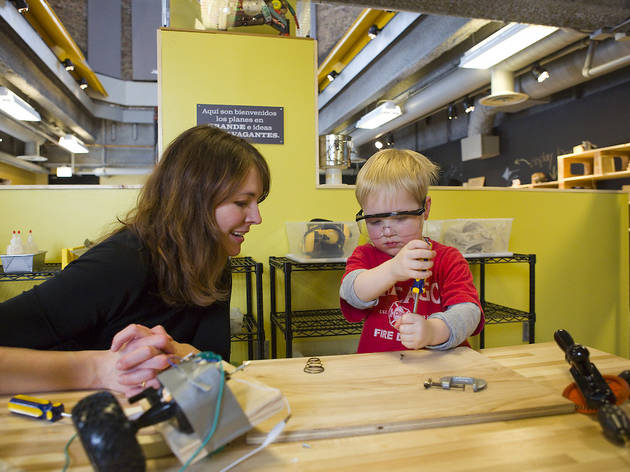 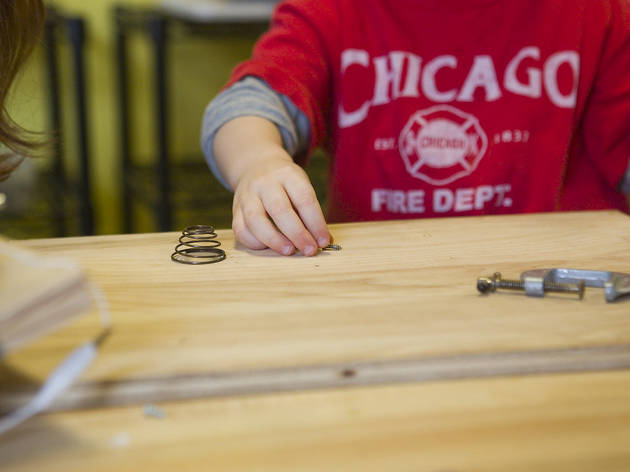 The “Tinkering Lab,” as it’s called, is filled with the din of little hands experimenting with real, rather heavy-looking hammers, saws and drills. The kids are transforming the visions in their minds into odd, steampunk-like contraptions of wood, buttons, discarded mechanical bits and other repurposed ephemera. Sometimes the kids struggle a bit—a stuck saw or sliding piece of wood—but staffers and parents stand by patiently and let the kids problem solve, honoring the museum’s facilitator motto, “Wait, watch, follow.” “Assessing risk is a big part of development,” Farrington says. “And taking risks—safely—can help kids overcome fear.”

That sort of hands-on, trial-and-error experimentation is a major tenet of the Maker movement, on which the museum’s exhibition is based. For the uninitiated, Maker subculture takes traditional DIY and craft culture a step further, encouraging learning and innovation through community, collaboration, hacking and the creative application of new technology. “What the kids are making,” Farrington explains, “is not as important as the process.”

The exhibit is only the latest manifestation of Chicago’s growing Maker scene. Pumping Station: One (PSOne), Chicago’s first hacker space, dates back to 2009 when a motley group of engineers, tinkerers and creative types met regularly to exchange ideas at a café in West Town. In 2012, the group moved into its current permanent space (3519 N Elston Ave), which is outfitted with a homemade 3-D printer, plus equipment for metalworking, woodworking, IT, brewing and more. Entry to PSOne requires a membership key, but the space hosts open houses on Tuesday nights, as well as regular meet ups, including some on kid-friendly topics like analog gaming, soldering, motorized PowerWheels racing, laser cutting, knitting and more. “The majority of us have day jobs and, generally speaking, when you make mistakes, you face consequences,” says Adam Dzak, the space’s PR Director. “But at PSOne, it’s okay to make mistakes, it’s okay to ask questions—we come here to create like kids, and if we make mistakes, it’s fun and we learn more.”

Nationally, the movement was led by MAKE magazine, which in 2006 hosted the first Maker Faire to “celebrate arts, crafts, engineering, science projects and the Do-It-Yourself (DIY) mindset.” That San Mateo, California, event was followed by fairs in cities as far-flung as Detroit and Jerusalem. The inaugural Chicago Northside Mini-Maker Faire took place last year, at Schurz (3601 N Milwaukee Ave), a high school in Irving Park with a sizeable population of underserved students.

The fair’s organizer, Christina Pei, who’s involved in several University of Chicago youth outreach programs, plans on doubling the offerings at this year’s May 18 event at the school. “We’ll have about 100 booths, with adults teaching kids, and kids teaching adults,” Pei says. Last year’s demos included how to build a robot, solder a light, create anime on an iPad or pick a lock—the latter of which Pei teaches at Maker Faires across the country. This year’s roster promises reps from most of the major Chicago cultural institutions, too. “I feel this is where education needs to be going,” Pei says of the Maker movement’s explorative, hands-on approach.

The creative trend is poised to continue: Chicago Public Libraries recently received a $249,000 grant from the Institute of Museum and Library Services to build a Maker lab on the third floor of the Harold Washington Library. It’s expected to open this summer. Library reps say it will be a more hands-on extension of the library’s cutting-edge YouMedia digital lab for teens.

Why the sudden upsurge in tinkering? Dustin Thacker, the Chicago Children’s Museum’s guest connections supervisor—who also runs Tinkering School Chicago, a Maker sleep-away camp—points to the lack of opportunities for hands-on experimentation, as well the abundance of how-to’s available on the Internet. “I grew up on a farm in Central Illinois where I had the time, space and materials to experiment; that’s not as prevalent anymore,” he says. “But there’s a pure joy in creating something,” he notes. “It’s joyful and meaningful…It’s a way for people to interact with real things in a real way with real people.”