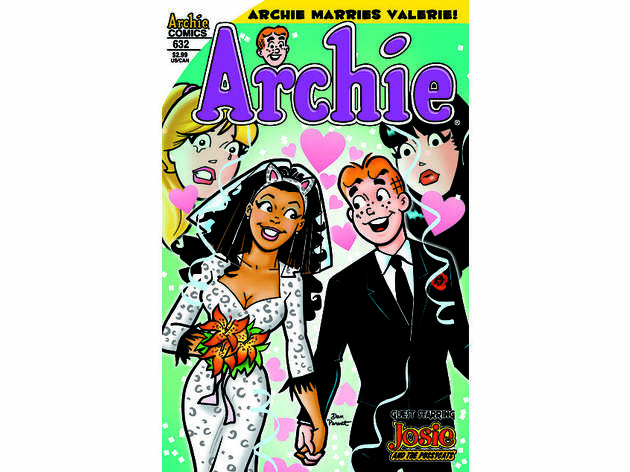 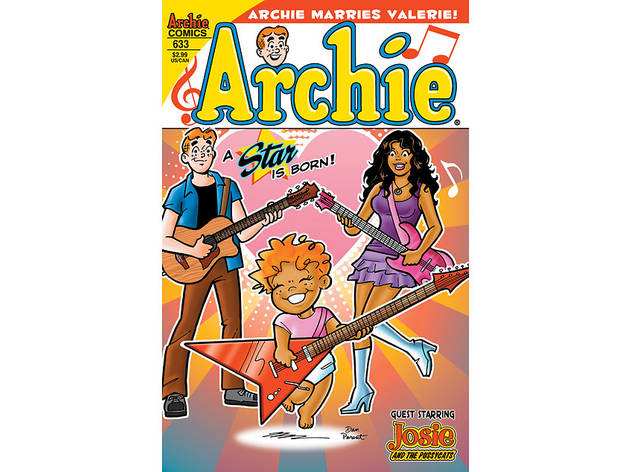 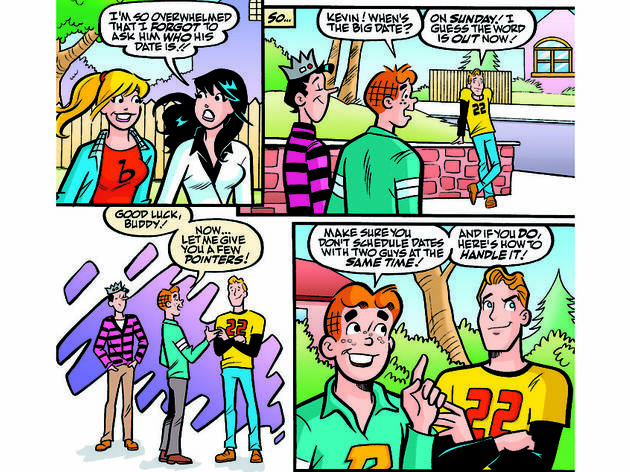 Launched way back in 1941, Archie Andrews and his gang from Riverdale have a longevity matched by very few comic-book characters (all of them superheroes). Reportedly inspired by the Andy Hardy movies, the comic-book series maintained its harmless identity for decades, mixing low-key teen high jinks with the never-ending Archie-Betty-Veronica triangle. Until recently, the Archie Comics company’s most progressive moment likely happened in late 1969, when creators collaborated with Hanna-Barbera animation studios to relaunch the character Josie as the head of a rock band, the Pussycats, with bassist Valerie as the first significant black female character in the comic.

Fast-forward to the 21st century, and Archie Comics has become a bastion of diversity. In striving to marry fun storytelling with modern-day relevance, longtime Archie writer-artist Dan Parent shook up the redhead’s world in 2010 by crafting a new romance: with Valerie! The  pair’s interracial kiss was a first. Parent (who’ll be at C2E2, the Chicago Comic and Entertainment Expo, April 13–15) also created Kevin Keller, Riverdale’s first openly gay student—a character so popular, he got his own monthly series.

Coming up in Archie Comics #631 (on sale March 28), Parent brings Valerie back to Riverdale, prompting a four-issue story line that includes the couple’s fantasy future wedding and a baby. And after that? “Occupy Riverdale” (on sale in July), with one-percenter Veronica on one side, Betty and Jughead on the other, and Archie caught in the middle.

Parent recently spoke to us from his home in Pennsylvania, where he lives with his wife and two teenage kids. A lifelong Archie fan, he’s been employed by the company—first on staff, now as a freelancer—for 25 years.

A lot of people think of Archie Comics as hopelessly dated, like an episode of Happy Days or the even-more-white-bread Leave It to Beaver. Fair assessment?
It’s fair, because Riverdale is a sort of place with a Happy Days atmosphere. Obviously, in the last few years, we’ve updated it. We’ve added characters—a bunch of new kids of different ethnicities—and some 21st-century stories. But Riverdale is still an idyllic small town in America.

How did the comics take a turn to greater social awareness?
We have a new CEO now, Jon Goldwater. We had a meeting two years ago about really bringing Riverdale into the 21st century, adding more diversity. That’s when we decided to also add Kevin Keller.

And how did you decide to pair Archie with Valerie?
I always liked Valerie and thought she was underused. I just thought it would be interesting to find out what their dynamic would be. At first it was going to be just one issue, but then this chemistry evolved because they’re both in bands. But they’re in different bands, which makes it hard for them to get together because [Josie and the Pussycats] are touring the world. It was one of the easiest stories I ever wrote. The dialogue flew out of me.

Now we’re revisiting it [in Archie #631–634] with “Archie Marries Valerie.” Most of the story is set in current day, but Valerie will envision what the future will be like if she marries Archie and they have a baby.

What happens to the couple next?
They’ll still be in love with each other, and we’ll see what happens. In this story line, we establish that Valerie’s family moves to Riverdale. We’re also introducing Valerie’s brother, Trevor—and let’s just say that he and Betty will have a flirtation.

What’s notable about Kevin’s or Archie and Valerie’s plotlines is: They don’t feel like “a very special episode” of a sitcom. Nobody gets worked up about Kevin’s sexuality or Archie or Valerie’s race.
Right, right. We address the fact that Kevin’s gay, but that’s not all he’s about. And with Archie and Valerie, we know it’s an interracial romance, but that’s not really the point of the story.

I wonder when Rick Santorum or Sarah Palin will lead the Archie backlash. Are you surprised that hasn’t happened yet?
I know—I hope they do. But you heard about the Million Mom thing? [The conservative group protested a story set in the future in which Kevin Keller gets married.] To me, it just seems like they have a lot of free time on their hands. When you’re attacking Ellen [DeGeneres] and Archie Comics, you’re grasping at straws. We can’t complain because the issue sold out. Here’s to future boycotts by the Million Moms!

What’s on your agenda for C2E2?
To meet a lot of fans, have lots of fun and draw lots of sketches. I’ll be at Artist Alley with a few other Archie artists, and I’m on a panel talking about rock & roll and comics.

Parent will meet fans at C2E2, April 13–15 at McCormick Place. Look for him at Artist Alley, where he’ll draw sketches for fans (starting at $25).