“You look confused. Do you have any questions?”

That’s how a suited man greeted our table at Baffo recently, moments after we were seated and beginning to peruse the menu. At the time, it felt a little condescending, (we were the youngest people there), but in retrospect, it was just the beginning of many, many questions about Baffo, Eataly’s fine-dining restaurant.

Why, for instance, did it think it could charge $15 for cocktails that were so mediocre? Why was the bar decorated with a guitar and crates? Why was the music an out-of-place soundtrack of Edward Sharpe and MGMT? Why was the foie gras and chicken liver–stuffed pasta coated with a sickly sweet balsamic brown butter–brown sugar sauce? And why, oh why, did anyone working at Baffo not usher out the raucous group of six fortysomethings who were intoxicated by the time they arrived? “Say semen!” the women yelled when taking an iPhone photo of the men in the bar. I’ll spare you what the men said to the women when it was their turn for a photo, but suffice to say, if we encountered them earlier in the meal, we would have lost our appetites.

Unless you know that Baffo is related to Eataly, you’d never guess it from the space—or the food. Mario Batali was in town when Eataly opened, but Baffo opened without much fanfare, and the only overt connection to Batali is the orange crocs the expeditor was wearing. The dining room, which has an open kitchen, is spare, with a palette of browns and grays, tables simply set with white tablecloths, paintings and silver bars on the walls, which seemed to exist so our drunk friends could hang off them and take more photos. The simple decor isn’t necessarily a bad thing, since it’s the kind of basic space you barely notice when the food shines. But it does not—for the most part dishes are merely fine, but when dinner for two costs $300, you expect there to be at least some notable dishes (and, maybe, not hear fellow patrons screaming about bodily fluids).

We began with cocktails, but skip these in favor of wine. There’s a Negroni too heavy on the vermouth and an overly sweet Scotch-falernum-pistachio cocktail served in a too-large martini glass. It could have shared some of the sweetness with the Whiskey Montenegro, rye plus three amari and bitters, which needed sugar. But our server was really knowledgeable about the wines by the glass and there’s a variety of styles and price points available.

There’s not really a variety of price points when it comes to food, though, so prepare yourself for pastas that average $22 and entrees in the $30–$50 range. Chef Eli Anderson’s menu is divided into antipasti, pasta courses and entrees, and the servers encourage each person to order one dish per category. And with prices that high, you expect more from the tiny marinated sardines, served with bagna cauda and lobster oil, which were fine but forgettable. Ditto for the squid ink fettuccini, al dente pasta tossed with chunks of lobster and accented with slivers of salami. But the aforementioned liver pasta, with its too-dry filling and gritty sauce, stood out for being ill-conceived. The entrees aren’t much better—they include a tepid calamari, served with fregola and olives in a thin tomato sauce, and the barbecued squab, a tough bird set atop a mildly flavored (but vibrantly pink) beet farro risotto.

The servings aren’t really large enough for you to be full by this point, but even if you are, make sure you get dessert, the saving grace at Baffo. There’s a really lovely millefoglie, with flaky pastry layered with vanilla cream. Toasted white chocolate is spread on the plate and there’s a quenelle of bright, tart raspberry sorbet. The sorbet also appears with the toasted almond mousse, a baseball-size orb of mousse with a liquid chocolate center and a thin chocolate shell. It’s a large dessert, and easily shareable.

On my second visit, I sat at the bar on a weeknight and realized what Baffo is best for—having a quiet glass of wine without dealing with the crowds upstairs at the Eataly wine bar. But in terms of food, Baffo pales in comparison to Eataly, where you can find excellent renditions of similar dishes, like pasta and calamari, for much less. Save the money you would have spent at Baffo and go to town on the food at Eataly. You’ll have a better, more delicious time. 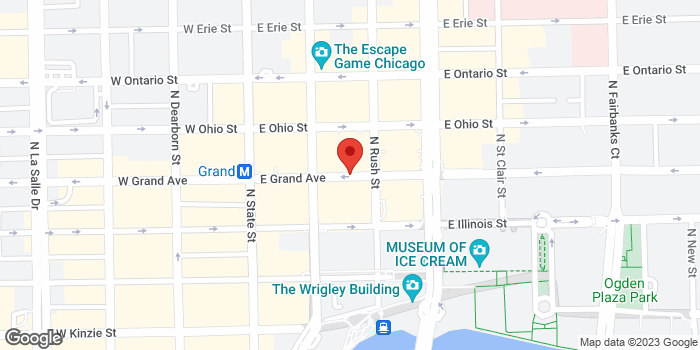