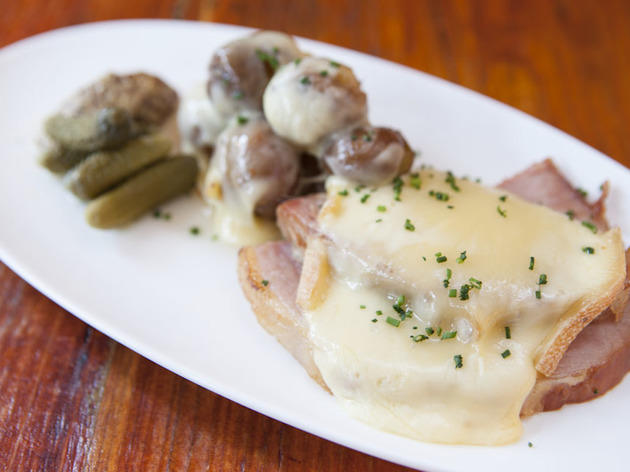 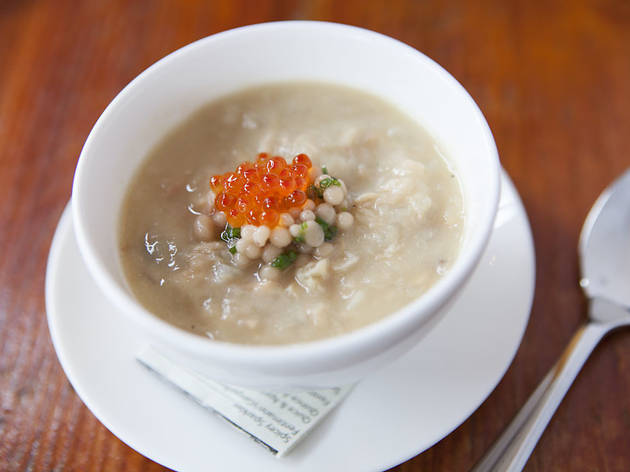 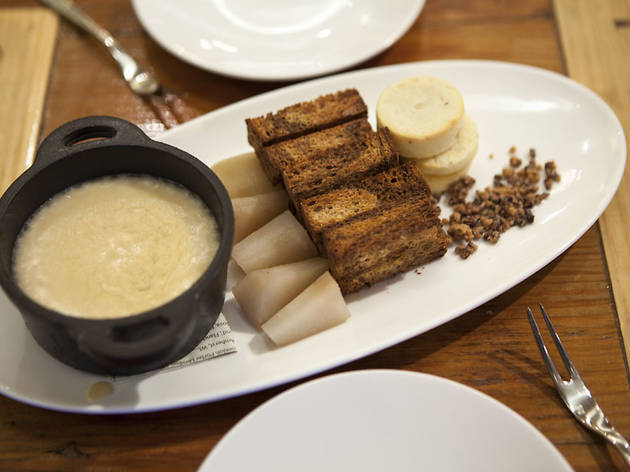 You can’t eat at Bar Pastoral if you’re lactose-intolerant, and you can’t eat there if you’re concerned with your fat intake. On this, there is no budging. At a restaurant opened by a cheese shop, cheese is not part of the experience—it is the experience. So you have to love the stuff. Personally, I’m comfortable with that.

And yet I was still taken aback by the big plate of ham, the entire thing covered in slices of slowly melting raclette. Not really caveman food, but not particularly nuanced either, it struck me as a little brute. Like what you might get if Medieval Times went upscale.

My meal at Bar Pastoral didn’t start off this way. It started with—yes, I’m declaring it—the city’s best pork rillettes, packed into a jar, topped with a silky sweet-potato puree and finished with crème fraîche and chives. How chef Chrissy Camba takes three layers of lushness and renders them delicate and light is nothing short of a miracle. That, or great skill. Maybe both?

Bar Pastoral is a place for eating those rillettes, or salumi—anything you can slap on bread (and the bread here is very good, crusty and soft in all the right places). It’s a place for drinking wine, and they make it easy to do so—half glasses are just $5, so you can, if you’re like me, go from a tart Greek blend to a slightly rounder Italian and back to the Greek again, all while only dropping $15. It’s a place for Camba’s impressive housemade English muffins, spread with soft quark cheese, orange marmalade and a small piece of crisp bacon. It’s a place for all of these things—but the problem is, it’s not particularly builtfor these things.

Instead, most of Bar Pastoral is set up like a restaurant, with chairs and tables lined up in neat rows. Though the menu relegates Camba’s entrées—sorry, her “not so small” plates—to the lower right-hand corner of the menu, I fear the physical setup of the place will encourage people to focus their attention there anyway. And that’s when Bar Pastoral won’t work as well. That big plate of ham, juicy but aggressively salty, can’t stand up to the smaller plates. The roasted cauliflower, drenched in a lifeless Mornay, will only disappoint. And should somebody get the idea to start with the soup—well, I hope that soup isn’t the boring trout chowder I had. Because if it is, there’s little chance whoever eats it will come back. That might leave seats for me at the cheese bar, where I’ll return to drink and snack my ass off. But it would be bad news for Bar Pastoral, a place that deserves to be patronized by people who are willing to squint and see the place as a bar.