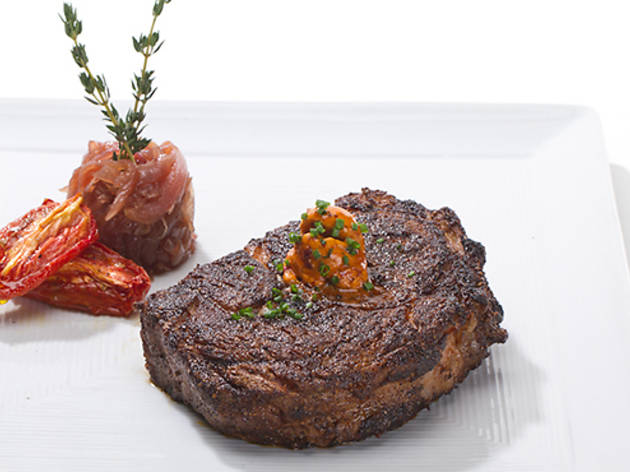 It started as kind of a joke. During a meeting a couple months ago to plan our Chicago Bears–related coverage, I said I wanted to review Ditka’s, Da Coach’s Gold Coast steakhouse/shrine to his days as a player and coach, because that would be hilarious. But then it sort of made sense—we’ve never reviewed it, even though we’ve reviewed Michael Jordan’s Steakhouse, and if people are flocking to eat somewhere, well why not review it?

And, oh, they are flocking. On our visit, the memorabilia-encrusted restaurant was packed, and this is not a tiny restaurant. No, there’s a patio, a bar, an upstairs, a downstairs and several dining rooms. Not to mention, a few private rooms where people were holding events. There are Ditka things everywhere, from books and jerseys to photographs of young Ditka hung in every bathroom stall (that last one is rather creepy). From our vantage point in the upstairs dining room, it seemed like there was a good mix of tourists and locals, as well as Iron Mike himself, who sat at a table at the top of the stairs and presided over the restaurant.

Ditka was dining with a couple other people—one of whom, later in the evening, got up, grabbed a microphone and started lip synching Louis Armstrong's "What a Wonderful World,” as well as a Sinatra song—but stood up approximately every two minutes to sign a jersey or have his photo taken with fans. I’d be irritated, but this is, of course, the man who hawks Vienna Beef sausages, his own brand of wines and a Bloody Mary mix. The drinks are available at the restaurant, along with a beer, Iron Mike Ale, made by Leinenkugel. You can flavor your steak with Ditka’s Real Steak Sauce, which has a cartoon of Ditka’s face on it. And if you want souvenirs—and of course you do, you're at Ditka's—there’s a gift shop.

The generic menu is a exactly what you’d expect from a steakhouse—steaks, crab cakes, a raw bar—plus sliders, pizza and pasta. There is something for every Ditka fan to eat while paying homage to Da Coach. Our approach was to order Ditka’s namesake dishes. We dug into a big plate of Coach’s Pot Roast Nachos, a layer of chips piled with cheddar, sour cream, tomato, huge hunks of beef and jalapenos with no trace of heat. Four of us couldn’t finish them, but we were also eating Mike’s salad—greens with candied pecans, goat cheese, apples and cranberries. It was drizzled with balsamic vinaigrette and basically sweet enough to be dessert.

We split the “Fridge” Burger, named for former Bears player William “Refrigerator” Perry and far less massive than one would imagine. It’s a pretty solid burger and comes topped with cheddar, mustard, mayo, pickles and LTO, and with hot, salty fries on the side. It’s a better pick than the filet two ways—we had to try some steak but the 20-ounce “Kick Ass” paddle steak sounding daunting—which came with two portions, a thicker, more flavorful piece coated with béarnaise, and a limp piece with horseradish crust. Desserts included a super rich peanut butter pie that basically tasted like peanut butter mixed with cream cheese, and a key lime dessert that purported to be an icebox pie, but which was not.

We stuck to the same tactic with drinks: I tried the Mike Ditka “The Hall of Fame” Chardonnay, and we had the Iron Mike Ale, both of which were fine. We also had the Coach’s Julep, made with rye, mint and Branca Menta, which is minty but not as bitter as Fernet Branca, and which isn’t for everyone (it wasn’t for us).

On the whole though, Ditka’s isn’t bad. It wouldn’t be my first choice for a Chicago steakhouse, but for diehard Ditka fans? I get it. I once ate at Big Papi’s Grille outside Boston because I love David Ortiz. It was terrible but I loved it, and I left there without getting my photo taken with the restaurant’s namesake.