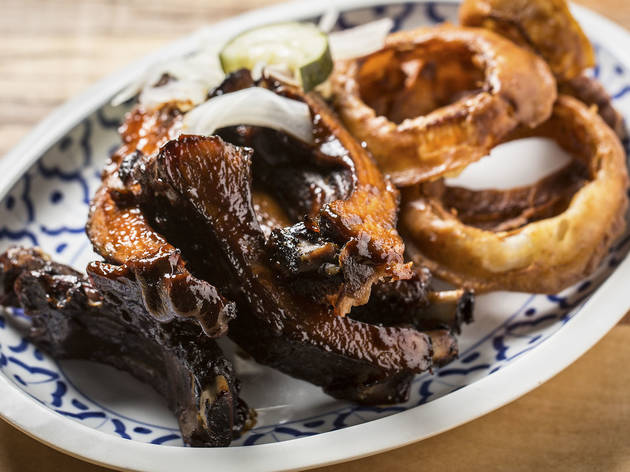 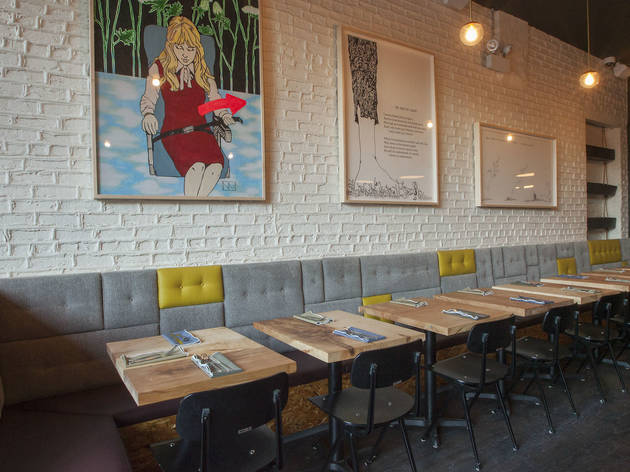 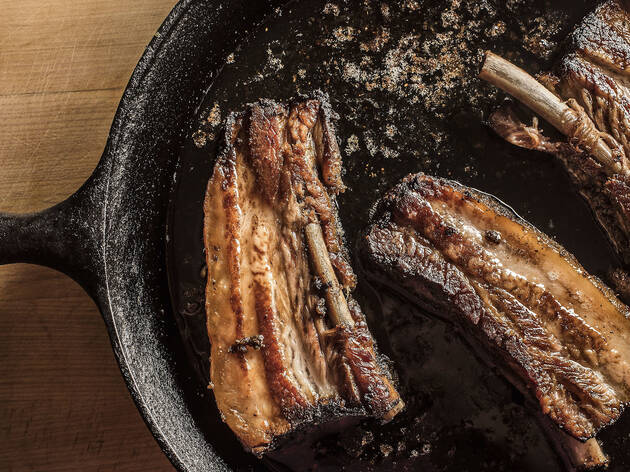 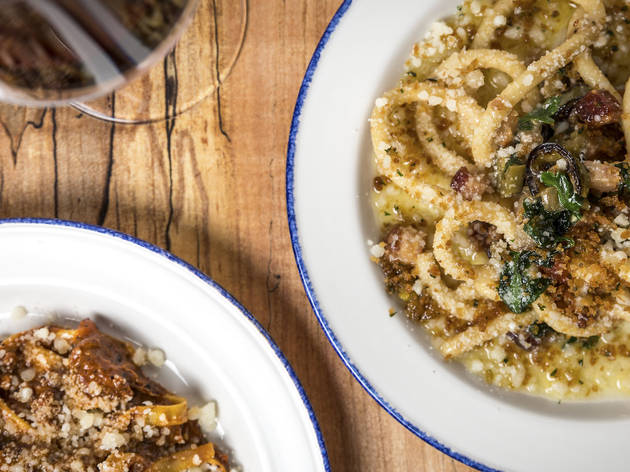 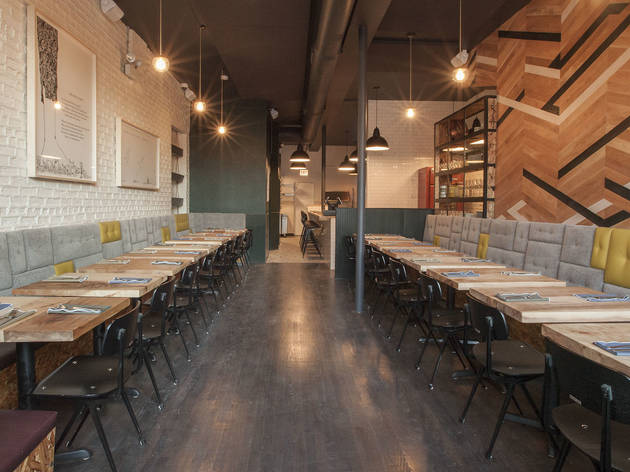 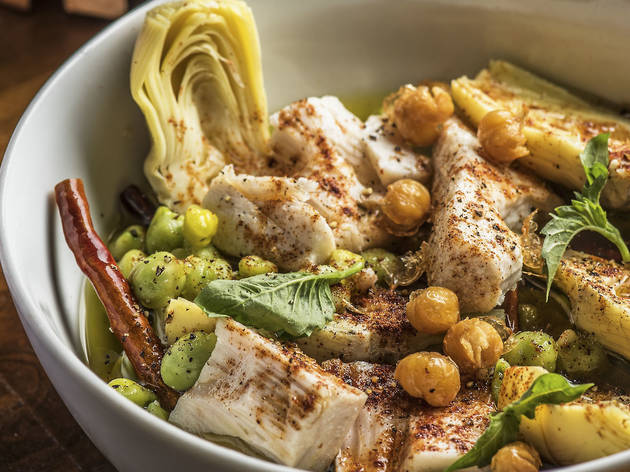 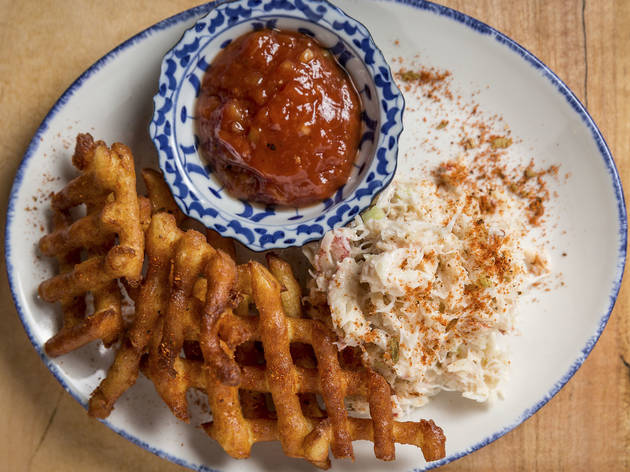 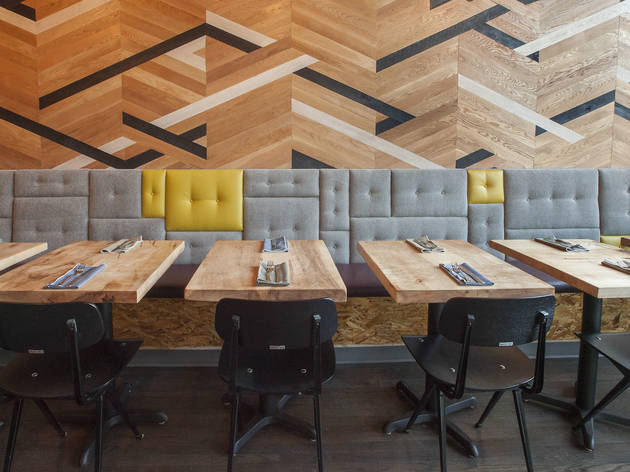 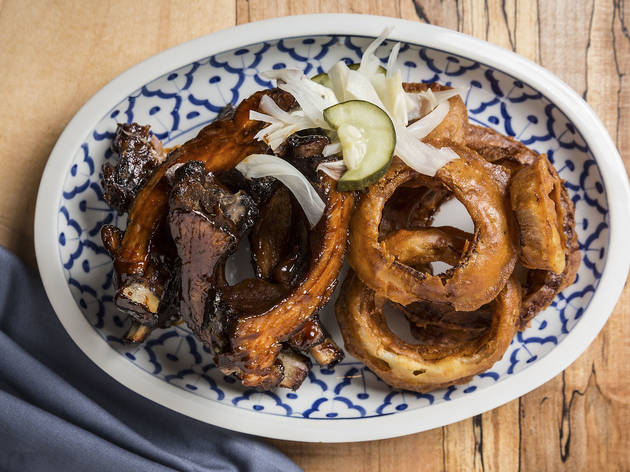 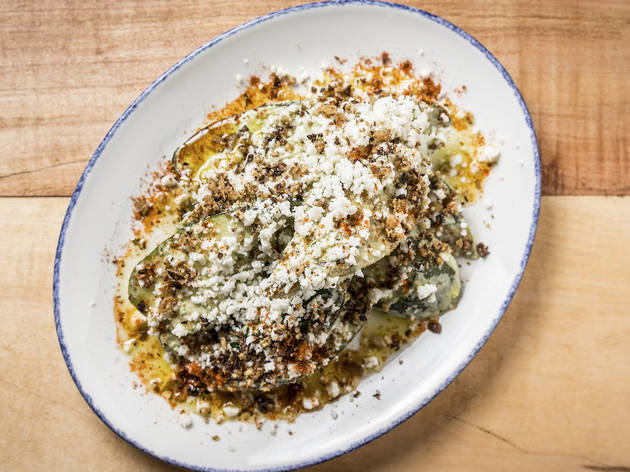 Jason Vincent’s return to the Chicago dining scene delivers a menu full of flavor in a small space.

A framed print of Shel Silverstein’s poem Me and My Giant hangs on the wall of this ironically named Logan Square restaurant—it’s tiny, sitting only 44 people. But what Giant lacks in space it makes up for in flavor. After closing Nightwood in 2015, chef Jason Vincent took time off from the Chicago dining scene before opening Giant with partners Ben Lustbader and Josh Perlman in summer 2016.

The menu is filled with shared plates, each with a bit of its own flair. The theme is “simple, unpretentious Midwestern fare,” but expect nothing but big flavors from dishes that might sound unassuming on the page. The menu starts with an attention grabber: uni shooters, bite-size fried balls with a crunchy exterior filled with melty, buttery, briny uni. Peppers are abundant, beginning with sweet biscuits with a sugary crust and a jalapeño honey. Pasta is the other star—our favorite is the “sortallini,” a little like tortellini, served in a refreshingly acidic and bright sauce that’s packed with guanciale, basil and pine nuts. As hard as it is to go wrong with anything on Vincent’s menu, it would be a shame to overlook dessert; choices like cajeta ice cream bring nostalgic notes of strawberry crunch ice cream bars.

You’ll feel cozy in Giant’s small confines—the restaurant is crammed with tables that you’ll have to maneuver to get in and out of. But somehow, it doesn’t feel overwhelming—with evenly spaced courses the small space works. Just don’t expect much privacy; you’ll be right up next to your neighbors (all the better to spy on their menu choices, right?). The space fills quickly with such a small seating area, so reservations are key. Without a reservation (and if there’s space), you’ll be seated at a bar overlooking the kitchen, a location that feels a little crowded and warm, backing up to the bathrooms and facing hot ovens. Despite the petite surroundings, we’re delighted by Vincent’s return to the Chicago dining scene. Expect Giant to become a staple of the ever-expanding row of restaurants on Armitage Avenue.

Where to sit: Make reservations, or you’ll find yourself having a hard time getting a seat. There are only so many tables in a room this size, but cross your fingers for a table near the front windows, big and bright.

What to eat: Absolute musts are the uni shooters, sortallini and vegetables like marinated zucchini with pumpkin seeds and cilantro and broccoli with lemon.

What to drink: The cocktail menu consists of classics and simple twists. We’re always down for a good spritzer, and Giant’s version comes with Cocchi Americano. Wines make for good pairings, and it’s always nice to see a light Txakolina on the list.

Atmosphere: This space is small. While it might not make for the best first date spot, seasoned couples or friends will fall in love with the dishes. Just don’t expect an overly romantic atmosphere, or to have a serious private conversation.