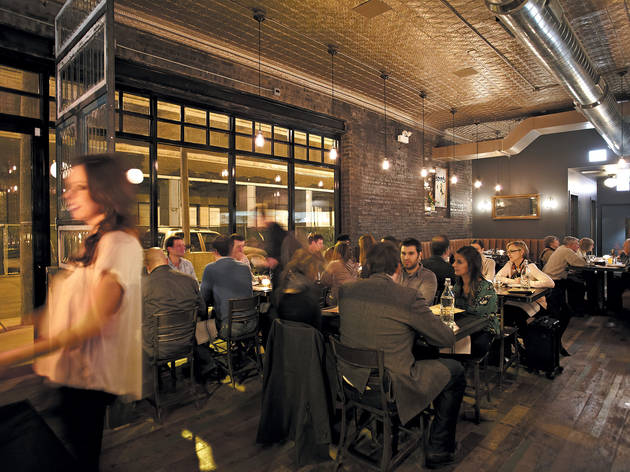 The short review of La Sirena Clandestina is as simple as these 12 words: Go. Late night. Order the Papi Chulo cocktail. And the moqueca. Consume.

It can be that simple, if you let it. Both the Papi and the moqueca represent the best of this restaurant without falling into some of its pitfalls. The Papi is made with tequila, Aperol and Yellow Chartreuse, and to drink it is to progress through all three of these flavors, one by one, with every sip. (You’ll think there’s grapefruit in there, too, but no—it’s all in the nose, coming from the garnish.) The moqueca, a seafood stew sporting a briny, tomato-based broth, is a fabulous thing: a filet of sea bass flaking apart in the center of the bowl, creamy mussels hanging out around the edges, and two sweet, meaty head-on shrimp. That each of these are cooked perfectly is a testament to the experience and expertise of chef-owner John Manion, who in the past few years has taken over so many restaurant kitchens (Old Oak Tap, Goose Island, Branch 27) that TOC once called the guy a “fixer.” (He didn’t like that very much.)

A place for Manion to call home has been a long time coming, and at La Sirena he’s built himself a very attractive house. The walls are painted a dark blue-gray; netted light fixtures hang above the bar. The details—the striped dish-towel napkins (will these never get old?), the specials menu made to look as if it were handwritten (à la Nightwood)—have been attended to, and the payoff is that La Sirena is a place you want to hang out in, a club you want to be a part of.

I just wish Manion’s Brazilian-leaning menu were more consistent. For every amazing dish I tried (a lively salad that balanced the succulence of octopus with the acidity of peppers, olives and tomatoes), there was a disaster (a skirt steak so charred it was rendered too bitter to eat). But more frustrating was that much of this food lives in the middle place between fine and good. The chicken thighs lean good—they have crispy skins and the meat is juicy—but because the elements promised on the menu (garlic, chilies) aren’t too detectable, the dish lacks punch. Vegetarian empanada fillings (a mush of squash; the tired combination of mushrooms and goat cheese) can’t compare to the big, spicy, gamey flavor in the venison version. (Though all of the empanadas have the same flaky pastry, which shatters when you bite into it, and this is a good thing.) I loved the ceviche (swordfish the night I had it) for Manion’s light touch with the pineapple and the crackly, housemade “saltines” that come with it. And I wanted to love the acaraje (black-eyed pea fritters), but I found that the vatapá, a thick coconut milk/peanut/fish sauce puree, overpowered the plate.

Along the way there were harmless side dishes (a standard kale/raisin/pine-nut salad; chewy squares of pão de queijo, Brazilian cheese bread), and I guess you could say there are desserts here, too, though there are only two, and one of them is an alfajor, an Argentine sandwich cookie filled with dulce de leche that, for some reason, Manion serves ice-cold. One night I decided to end with the pork loin milenesa instead. It was wildly enormous, a plate-size piece of pork that had been flattened, fried and topped with buttery mushrooms and a fried egg. With no acid on the plate—and therefore little to break up the monotony of all that richness—the dish was an aberration from the rest of La Sirena’s food and cocktails, which even when lackluster exhibit restraint and finesse and a notable brightness (more signs of a chef who knows what he’s doing). While it’s no surprise that someone who has put in so much time at pubs has a few hunks of meat in his repertoire, my hope is that La Sirena continues to evolve in the other direction. Manion’s got a home now, and if he sticks to his guns, it’s going to be a nice place to visit.