Restaurants, Soul and southern American Ukrainian Village
3 out of 5 stars 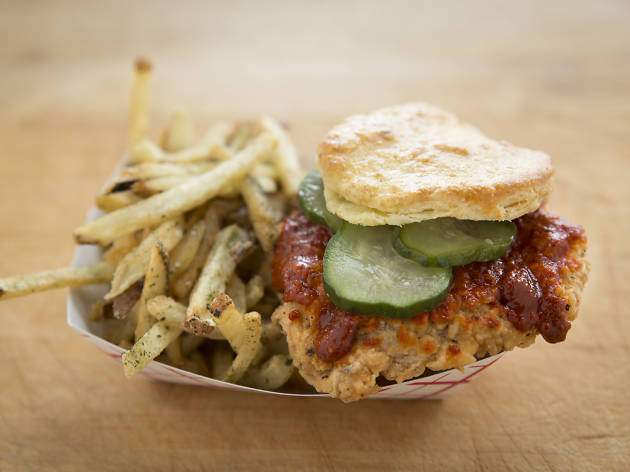 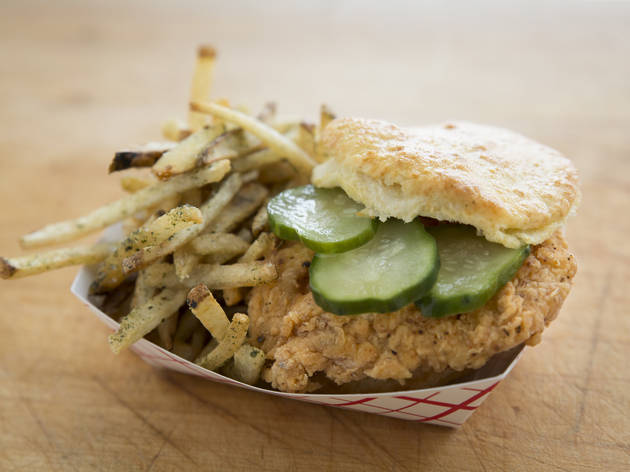 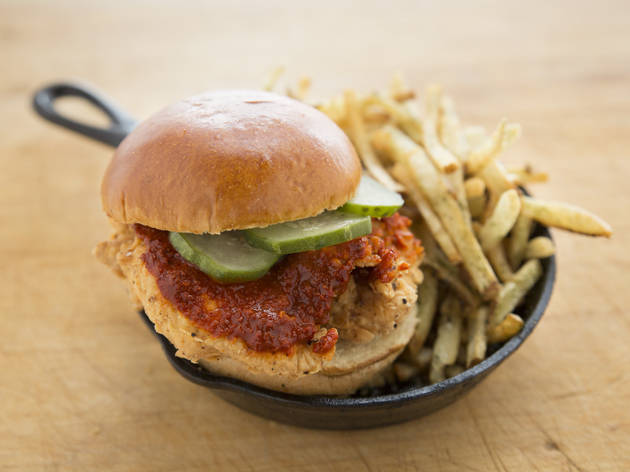 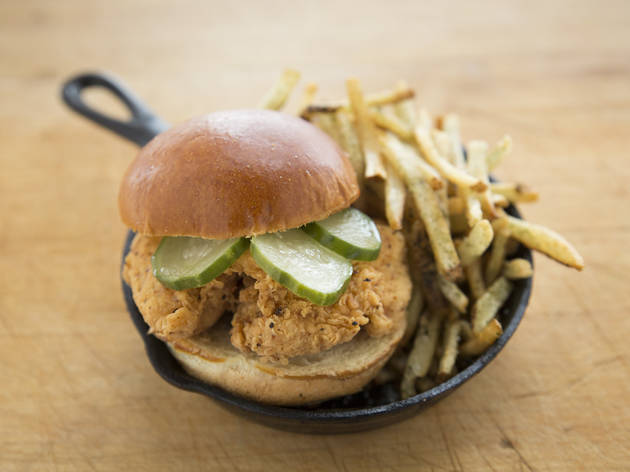 In the month Leghorn Chicken has been open, it’s attracted the most attention for its blaring rap soundtrack, which necessitates a sign on the door announcing: “Loud explicit music.” It’s also known for opposing Chick-fil-A’s anti-gay stance, and as such it donates two percent of its profits to gay-rights organizations, is open on Sundays and is planning to give out branded condoms at the register.

If you didn’t already think that Leghorn’s political image seemed more important than the food, you’ll feel that way after eating there.

On the surface, Leghorn, by chefs Jared van Camp and Sieger Bayer, has a lot going for it. It’s from Element Collective (Kinmont, Old Town Social, Nellcote), and because they’re a solid, experienced restaurant group with a handle on social media, it attracts a crowd. They sold out of 600 chicken sandwiches in 90 minutes opening day. Now, there’s chicken available “consistently until 9pm,” Leghorn’s publicist told me. Plus it’s BYO and right across the street from Sportsman’s Club, so you can buy booze there to take over to Leghorn, or vice versa. And it’s affordable—sandwiches are $6 and sides are $3–$5. But, ultimately, it’s nothing more than a decent spot for a quick meal.

The menu is pretty simple: Choose a breast or thigh, then decide whether you want it pickle-brined or Nashville hot (inspired by the incendiary style in Nashville) and whether you want it on a biscuit or a bun. The pickle-brined chicken is utterly bland, but the Nashville hot has a slow burn that you can cut with the creamy rancho verde sauce. Unsurprisingly, the thigh has more flavor than the breast, but both could use a little more oomph. The biscuit crumbled and fell apart; the bun held together much better and as a result, the hot thigh on a bun is the best option. Each sandwich comes with pickles, and you can also add on slaw, lettuce, tomato, mayo, barbecue sauce and other toppings, all of which cost extra. Add lettuce, since the sandwiches need some crunch. While the build-your-own option is great for some, I wish Leghorn had a couple suggested combinations, since the server at the counter couldn’t offer much help about which toppings work best on each kind of chicken.

Besides chicken, there are a variety of sides available, including the clear stand-out on the menu: the textbook-perfect hush puppies, which are stuffed with green chiles and which we devoured in minutes. Not so for the chicken-fried fries, a Tuesday special, which were greasy and undersalted. The vegetable slaw—a mix of veggies, including carrots, beets and apples, presented in plastic take-out containers—was too sweet and didn’t retain any crunch. If you’re going to have a single dessert on the menu, it should be memorable, but here, the peanut butter oatmeal cookie is crumbly and forgettable.

And about that rap music. The soundtrack (which includes Ghostface Killah and Notorious B.I.G.) never felt like it was blasting, but it was loud and distracting. Leghorn definitely isn’t the kind of place to hunker down for a leisurely lunch.

Leghorn is opening at a time when fried chicken is everywhere (in biscuits and on food trucks and bathed in butter). It takes more to stand out. Given the option, though, it’s better to be remembered for superlative chicken, not the music.