Steakhouses descended like alien intruders last year, here from Planet Beef to take over River North. I poked around all of them—the one with the 400-degree plates, the one with the wine list on an iPad, the one with the crab cakes and the mashed potatoes. That last one was [node:150445 link=Benny's Chop House;], of course. No, wait, it was [node:176437 link=Chicago Cut;]. Or was it…eh, forget it. I’m helpless. I can’t distinguish among any of these places.

And so I staked out Michael Jordan’s as a seasoned steakhouse tourist. There were all sorts of attractions (MJ himself not among them). The restaurant is in the lobby of the Hotel InterContinental, a place that has the tile work and curvaceous ceilings of an Egyptian palace (or, you know, something like that). Most of this has been kept intact for the new restaurant, which took over the space that Zest left behind, but there are a few additions. A frosty strip of glass forms a modern bridge—a catwalk, if you’re so inclined—to get to the dining room. And if you look closely, you’ll see the number 23 hidden in some of the decor. The number is meant to be worked in seamlessly, as if it’s been there forever. But if you think the number 23 has something to do with anything other than Jordan, you know less about basketball than I do.

I suppose a big basketball fan could come here and get off on the Jordan stuff. It’s not over the top—it’s not Harry Caray’s or anything—but there’s enough for a Jordan enthusiast to get into. The chopped salad with 23 ingredients—must be Michael’s favorite, right? Order it and you’re one step closer to the guy.

Happily, Michael Jordan’s the restaurant does not rest on the laurels of Michael Jordan the person. In fact, I’m tempted to suggest that the prospect of such an accusation has inspired the restaurant to go beyond the call of duty. Within 15 minutes of my first visit, I sensed this steakhouse was not like the aforementioned River North invaders. It was in the menu and in the service and in the room—this place was making an effort to stand out. It was especially in the beverage program, which deviated from the steakhouse trope of 100 Napa Valley cabs to include local beers, local spirits and cocktails by a guy named Peter Vestinos, who apparently can’t stop himself from working in Chicago. (Vestinos, one of our pioneering bartenders, left us for California a little bit ago, but for Michael Jordan’s he’s come back for a three-month consulting gig. I should mention here that I know Mr. Vestinos, and that he is impossible to sneak past, which is why I was recognized each time I visited this place. I did not accept any free drinks, of course. Come to think of it, he didn’t offer any. Jerk.) Most of all, the steakhouse’s efforts at originality were evident in its nonsteak entrées, a list of options that frankly called out to me more than the steaks did. Considering that the steakhouse genre encourages, or at least is resigned to, the fact that each new addition will be a replica of what’s come before (crab cakes! wedge salad!), this was a nice surprise.

That said, I did order the crab cake—sorry, the “colossal” crab cake—on one visit. There was almost no filler in this thing—the pieces of crab were kept together by a thin layer of mayonnaise-like spackle—and it did rise off my plate in a colossal, majestic manner. But like so many other dishes here, the crab left me wanting. “Good, not great,” is how my companion described it (with a shrug, no less). I agreed. I preferred the lobster, with garlic shavings, tomatoes and a sweet soy vinaigrette that gave the lobster something—several things—to bounce off of.

I even preferred the lobster over the bacon, which somehow has been elevated from breakfast side to dinner appetizer here. It is thick and very meaty, and maple-glazed, and smoky and sweet and delicious. But it is also Nueske’s bacon, something one can easily order off the Internet, and not something the kitchen cured itself. And so it is kind of a cop-out. Which pains me to say, because so much here is not a cop-out. Those entrées I mentioned, lamb chops with merguez sausage and harissa, chocolate-rubbed pork over chili, were innovative, with flavors that popped (particularly the sweet pork against the spicy chili) and perfectly cooked proteins. And the sides, not just the expected green beans with almonds but also the less expected (for a steakhouse) elote­-style corn, were nothing to complain about. MJ’s even toys a little with the steaks, giving the signature steak (the 16-ounce Delmonico) a ginger-balsamic glaze. But, sadly, the steaks I tried, whether adorned like the Delmonico or served naked like the New York strip, were light on flavor and a little mushy in texture. It made me wish this place were just called “Michael Jordan’s,” because then who would care about the steaks? We’d all just be able to focus on the other stuff. The insane garlic bread with blue cheese fondue (“like Pizza Hut,” a companion said and, trust me, it was a compliment). The tart goat-cheese cheesecake, made with Prairie Fruits Farm cheese and smartly offset by plum sorbet. And the 23-layer chocolate cake. Though maybe not. The cake is huge but also hugely one-note. Doesn’t matter what number is slapped on the thing—this dish isn’t winning. 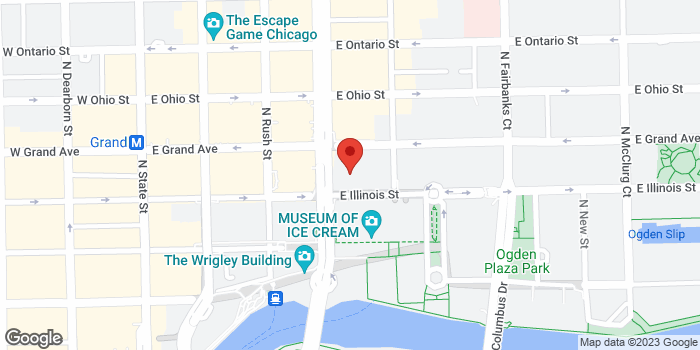